(SAULT STE. MARIE, ON: February 5, 2016): In their annual Shoot for the Cure event the Algoma Thunderbirds took on the Waterloo Warriors and cruised to back-to-back wins at the GLC.

With the power of pink uniforms, the Algoma Thunderbirds women’s squad jumped out to an early lead after Sydney Resch drained a long three. Algoma went on an early 8-point run forcing a Waterloo Warrior timeout. Waterloo chipped into the deficit but Algoma continued to pull ahead. Algoma showed off crisper passing, impressive three-point shooting, and better defence – an improvement from last weekend’s performance against the Guelph Gryphons. Algoma drove hard to the post, drawing offensive fouls to control the first frame, 22-13. Waterloo turned up the pressure in the second quarter but Algoma continued to bleed Waterloo, running up the score, earning points off of fast breaks and turnovers. Algoma cruised to an 18-point cushion, 40-22 going into the half. Algoma shot an impressive 44 percent from inside and 46 percent from outside in the first half.

In the second, Waterloo regrouped, playing better defense, forcing Algoma to run out the shot clock. Waterloo applied full court pressure trying to stop the Thunderbirds from further pulling ahead, but Algoma continued their hot hand from beyond the arc. Waterloo crawled their way back down the stretch, going on a 10-point run, cutting the deficit down to just 10 points. Algoma retaliated, controlling the pace, out-shooting and out-rebounding the visitors. Algoma snapped their losing streak, rolling past Waterloo 77-61. 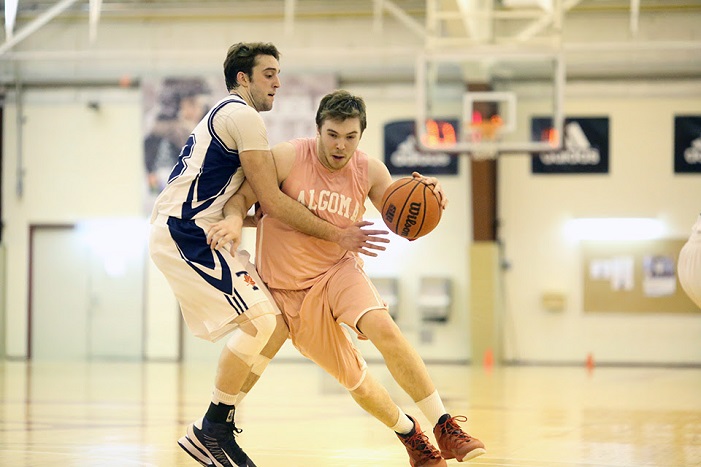 In their pink uniforms, the Algoma Thunderbirds men’s squad jumped out to an early 14-7 lead against the Waterloo Warriors. The black and gold battled back to even the game at 16. Waterloo edged ahead by one point before both teams went cold for over a minute. Andre Barber’s long three returned the lead back in favour of the home squad, 20-18, going into the second quarter. In the second, the teams changed baskets to the bitter end with Algoma edging ahead 38-36 to open the second half.

Algoma opened the third with a 22-3 point run to pull away from the Warriors, 60-39. Algoma controlled the defensive and offensive glass. Waterloo struggled to keep pace, turning over the ball. Algoma continued to cruise, widening the gap to 22 points. Jacob Clendinning went hot hitting back to back threes. Waterloo’s bench boss earned a technical, allowing brother Sean Clendinning to bleed Waterloo further. The black and gold earned another technical but Sean Clendinning failed to drain the shot from the charity stripe. Algoma went into the final 10 minutes with a comfortable 26-point lead. Algoma shot an impressive 58 percent from the arc in the third. The Thunderbirds opened the fourth with another 9-point run, giving Algoma a 31-point lead. Waterloo chipped into the deficit while Algoma went cold for 4 minutes. Eric Thompson went 2-2 from the charity stripe breaking Algoma’s cold snap. The Thunderbirds continued to pull away, running past the Warriors 96-68.

This is the third consecutive win for the Thunderbirds in their annual Shoot for the Cure event.

The Thunderbirds take on the Warriors again tomorrow evening in the GLC. Game times are 6:00pm (women) and 8:00pm (men).