Trending
You are at:Home»Raw»Sault Man Fighting For His Life after Beating from Sault Ste. Marie Cops
By Steffanie Petroni on April 5, 2016 Raw

On March 26th, 2016, the day before Easter, a young boy called 911 operators to request the assistance of Sault Ste. Marie Police. His Dad, Tim Mitchell, had been drinking and was talking about ending his own life.

Amy-Lee Campbell, Tim’s daughter, recalled the event as described by her little brother. “My 14 year old brother, being just a young kid, got worried and called 911 –he was calling for help, and the police actually came here and almost took my Dad’s life, when my brother was trying to save him. That’s why the police were called. He didn’t harm anybody. He was talking about harming himself, probably because he was intoxicated.”

According to Tim’s young son -one of two sons ages 14 yrs. and 13 yrs. that were in the home when the beating took place, his Dad was outnumbered. Amy-Lee hasn’t spoken with the police about the event.

“I have not personally spoken to the cops nor do I care to,” remarked Amy-Lee with a note of controlled anger in her voice. “For me the evidence is there. It is not a he-said-she-said situation for me. He has three broken ribs, a punctured duodenum –that’s part of the stomach that leads to the intestine, that hole in the duodenum leaked feces into his abdomen. Now he is septic from that. He also had a collapsed lung. You couldn’t even recognize who he was because they punched him in the face so many times, his eyes were so swollen. I don’t need to know their reasoning for what they did. They came in his house, beat him up in front of my two brothers and didn’t even ask my brothers to leave. And he was drunk. And he’s 54 years old –he’s getting to the point where he’s more fragile. I don’t care to speak to the cops. It really doesn’t matter what they have to say.”

Jimmy Flint is Tim’s nephew. “They couldn’t take my uncle to jail looking like that so they took him to the hospital first,” he commented. “And then they took him to jail. A nurse told us they shouldn’t have done that.”

Tim spent two days at the Algoma Remand Centre with all of his injuries unattended. His condition worsened and on Monday, two days after the beating, Tim lay on the floor of his cell. Family members say that he thought he was going to die that day. 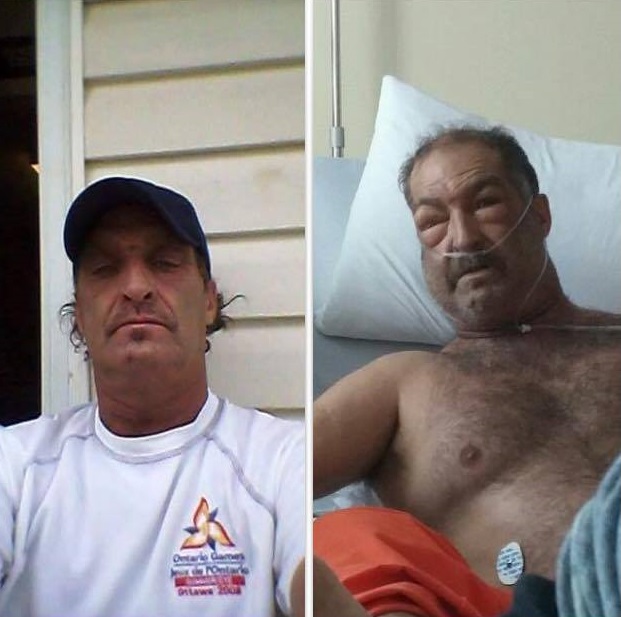 Tim Mitchell, picture of the results of his police beating on Saturday, March 26th, 2016.

“His neck was the size of a football,” stated Amy-Lee. “There was a hole in his lung and the air was blowing through his body…all that swelling is the air trapped in his body. He was just lying in the jail with a punctured lung. I just don’t know…the hospital must have not looked at the results properly.”

Unable to breathe, the jail returned him to the hospital. As Tim was being admitted to the hospital, Amy-Lee was sitting in the Sault Ste. Marie Courthouse for her Dad’s bail hearing.

“The Crown came out and said ‘well, I guess we won’t be bailing your Dad out today because he’s in the hospital’. And that’s how we found out. They didn’t even have the decency to call the family or anything.”

The Special Investigations Unit from Toronto has been dispatched to investigate Tim’s beating from Sault Ste. Marie police officers.

“They’re investigating the whole case,” commented Amy-Lee. “One of my brothers is being questioned because he saw what happened. My uncle, Don Mitchell, has been speaking with the Special Investigation Unit and they told him there were 5 cops involved.”

This Sunday, April 3rd, 2016, Tim took a bad turn and required emergency surgery. He has been in an induced coma and on life support for the past three days. According to Amy-Lee, Tim is stable today “for his condition”.

“The medical staff say that they consider him septic,” she remarked. “He has low blood pressure and as a result he is not distributing the water in his body –apparently that is common because he’s trying to fight an infection. They’re waiting for a culture to come back that will determine if he’s on the right antibiotic- that will take 24 to 48 hours.”

“He had been complaining about his stomach for three days before they gave him a CAT scan and found the leak,” added Amy-Lee of the discovery that feces had leaked into her Dad’s stomach.

“It’s a waiting game,” commented Amy-Lee. “He has a 50/50 chance of making it. We are just sitting around and praying and hoping and going in his room and encouraging him. We’re encouraging him to fight.”

Of his uncle’s injures Jimmy remarked, “My uncle was charged with breach of probation for drinking and resisting arrest. Anybody with a brain knows someone resisting arrest doesn’t end up in the hospital. He’s fighting for his life right now. It’s pretty sad.”

Asked what message she wanted to send to the community Amy-Lee wept. “My Dad is a really good man. Regardless of the circumstance he did not deserve this. He’s very, very loved by his friends and family. He had fifty-five members at the hospital yesterday that were visiting because everybody wants him to pull through this.”

With her voice breaking Amy-Lee added, “I just don’t want this happening to someone else’s family. This is so tragic. I would hate that any family would have to feel this. It’s gotta stop. This isn’t the first story I’ve heard about the Sault Ste. Marie Police and I’m from Sudbury for goodness sake.”

Prior to publication, the Northern Hoot reached out to Sault Ste. Marie Police several times today as well as Toronto Special Investigations. No response was received. The Sault Area Hospital declined to comment only stating:

The Northern Hoot will update readers as events develop.