The evening air chilled and Robert stood on his open cabin porch looking through tall red pines to the sky and though it was still August knew the warm summer nights were over. Towering bright white billowing clouds drifted with golden edges, overwhelming him with their immensity and complex beauty and he was in an unusual mood. It was painful to him their beauty couldn’t be fixed still even for a moment. He watched them drift east steadily towards Edison, away from Lake Constance and tried to grasp them, to consume their beauty, baring down his will to keep an image of them permanently in himself but he couldn’t keep his eyes from following as they drifted slowly, folding in and out of themselves, perpetually changing and frustrating his peculiar desire.

His wife Sandy had gone to Edison with Bridget after supper. Bridget was a new friend, a two summer friend, unlike others on the lake, a few they’d known for twenty years. That’s why Sandy went with her he thought. Bridget wasn’t his friend and neither was her husband, very successful Stanley, with a few dozen trucks constantly hauling goods all over the continent. A messy kind of man with a bulging stomach that looked uncomfortably firm and dark brown hair kept in place by its natural oils. The men knew instantly there couldn’t be a viable friendship between them but the trucking mogul was still polite in his coarse way. How he ended up here a couple of weeks each summer Robert couldn’t imagine. They didn’t seem like the kind that wanted to spend time on a remote lake fifty miles from the closest restaurant or bar. Sandy became friends immediately and Bridget quickly felt comfortable coming to the cabin when she pleased which was often and hardly ever stopped talking. 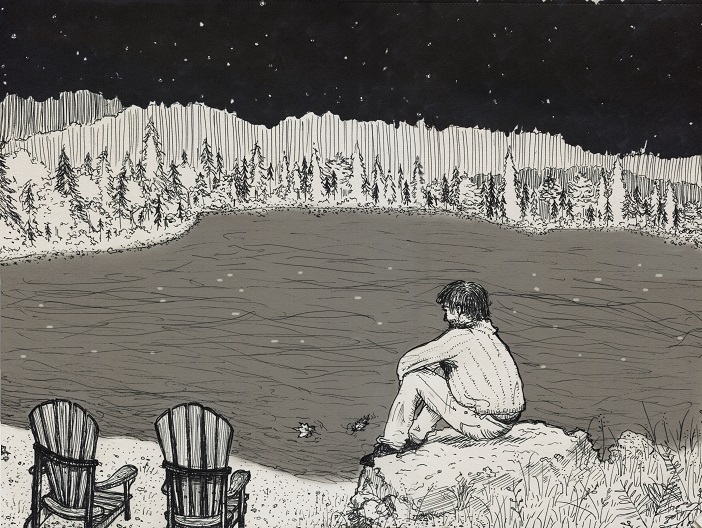 They were always laughing at the slightest thing and often talked intimately away from him, sometimes sitting by the lake for long periods on the white Adirondack chairs he’d built and it made him feel lonelier than usual. When Bridget was there Sandy hardly acknowledged him. Even seemed openly annoyed with him. At first he thought it was intentional but then wasn’t sure and felt like a piece of unused furniture when Bridget was there, and then felt that way even when she wasn’t. And now they were fifty miles away in Edison on some trivial pretext, which would be fine if she was with one of their regular friends. Sandy said she’d call when they got there which is something they always did because it was an uninhabited bush road, just endless trees and you never know what could happen but she didn’t and he knew this time, for the first time, she wouldn’t.

On the porch in the cooling air he felt the shortening of days more acutely. Northern Ontario summers passed to quickly and even more so when he got older. This had been his dream, spending entire summers at their remote camp and not just a week or two at a time. A dream made possible by selling his share of a healthy tech firm to his partner and retiring early. He had lived happily in southern Ontario all his life but when he went north on a whim with work friends for a fishing trip the endless beautiful sparsely peopled vast wilderness gripped his heart and didn’t let go. He’d even imagined selling his home in Barrie Ontario and living on the lake for good. Now he was fifty-two and Sandy forty-six. He certainly didn’t think he took her for granted through it all, discussing plans together and she was always agreeable. When he first discovered the camp twenty years ago it led to the happiest times of his life and he’d never been more in love. For several summers he had rented the cabin before offering a very unreasonable amount for it. There was no other place for them he had thought.

This summer Bridget and her husband made frequent day trips to town, probably at her urging. When she talked to Sandy about Edison it was always about the men. The good looking man at the gas station with the cute french accent, the one who double looked at her at the stop light and so on. At forty-one she was shapely and very good looking and when driving by their cabin on the way to town always stopped to ask if they needed anything. She’d sit in the S. U. V.  made up with pink glossy lips and drenched in solidified mousse like she was single going to sorority a party.

Robert opened a beer, went down to the lake and sat without drinking it. The sun was just below the thin darkening tree line on the other side of the lake and the air cool enough to see his breath. What a beautiful mysterious place this had been for them. He and Sandy used to swim in the dark then sit on the smooth stone beach shivering from the cold water, the sky a bright canopy of stars, their white pale feet on the cool stones and the darkness feeling alive and there were rare times when it seemed their flesh dissolved in the dark and just their spirits remained and he could feel her presence mingling with his and it had been unexpected and profound. He had felt that peculiar feeling only three times in his life, all of them with her and the first time here on Lake Constance.

She was so unlike Bridget. But tonight when she came out of the bathroom just before leaving she had sparkly plum eye shadow that really stood out on her handsome tanned freckled skin. Where did she get it he wondered. Probably Bridget. It didn’t look bad, it just wasn’t her. And when she seen him looking at her just a little curiously she stuck out her face and popped her lips that were thick with pink gloss.

“How do I look?” she asked like they were temporary acquaintances, not a bit interested if he said anything about it.

It isn’t Bridget of course, he thought. She was just the place, the time… but it seems so sudden.

“I’ll call you when we get there!” she had sang out not looking back and shutting the door.

It was after three a. m. when he heard Bridget’s S. U. V pulling into the drive. He was wide wake in bed with the lights out and hadn’t slept. He’d been thinking about their past, going over everything and in the end was left empty and more lonely. There was no single event he could find that led to this point. It just happened. For a long time she was drifting away and he had let her. Why did he let it happen he wondered. But he knew for sure he still loved her.

He heard the door open and screen door snap shut. She turned the kitchen light on and off and came into the bed room, undressed then laid down facing away from him and he could feel she wasn’t there.

“You can have the house in Barry and I’ll keep the cabin,” he said.

It just came out of him. He hadn’t planned on saying it.

“That will be perfect,” she said immediately and moved around to get more comfortable.