Sault Police Report an Increase in Calls Regarding Drug Overdoses

Methadone Treatment. The Other Opioid Epidemic? Part 4 of 4| ANOTHER WAY

Methadone Treatment. The Other Opioid Epidemic? Part 3 of 4| CLAIRE

Methadone Treatment. The Other Opioid Epidemic? Part 2 of 4| NICOLE

Addicted in the Sault (part 3 of 3): Skimming Off the Bull

From the Sault to the United Nations: Jacquilynne Gray’s Story Endures

Taking On the Government of Canada in Memory of Her Daughter: Bill C-2 Dehumanizes People With Addiction

Donna May, perhaps first introduced to the broader community through the sharing of her daughter’s tragic story of addiction, returned to Sault Ste. Marie yesterday in the hopes of addressing the need of increased harm reduction services.

“I still have family here, I have grandchildren and great-grandchildren that are growing up in this community and I don’t want them to be faced with either experimenting with drugs and not having access to services if anything bad should happen, or suffering the loss of another family member or friend. These services are available or implementable and they’re not being put to use in the Sault. And I don’t know why and I don’t see any reason for that,” remarked May.

According to Desiree Beck, Chair of the Sault Drug Strategy Committee, many harm reduction services are available to individuals inclusive of two needle exchange programs through Algoma Public Health and the John Howard Society as well as two needle drop-ins that operate after business hours- one in front of the John Howard and one in front the Neighbourhood Resource Centre; methadone maintenance and Suboxone programs; access to intramuscular or intranasal Naloxone through pharmacies, Group Health and eventually the Algoma Public Health Unit; and Naloxone training provided through the Group Health HepCare program.

“Like any other community in Northeastern Ontario we do have limitations and we do the best we can to provide those services,” commented Beck. “It is important to acknowledge that there are a lot of services and organizations in our community that operate under a client-centred approach. That falls within harm reduction and is a big thing.”

But May is advocating for a supervised injection site in Sault Ste. Marie – a place where people who use needles can be observed while using and intervention can be provided should an overdose occur. Injection sites like the Dr. Peter Centre, also offer a broad range of health care and support services. Unless exempted under section 56.1 of the Controlled Drugs and Substances Act, such sites are illegal. Injection sites operating without the exemption are likely to be able to do so because the police and province willingly ignore the activity.

Currently, Bill 37 proposes amendments to the Controlled Drugs and Substances Act as well as the Custom’s Act, the Custom’s Act, Proceeds of Crime, and Terrorist Financing Act. Introduced by the Liberals the revised strategy returns drug policy back to the Health Ministry and away from the Justice department. 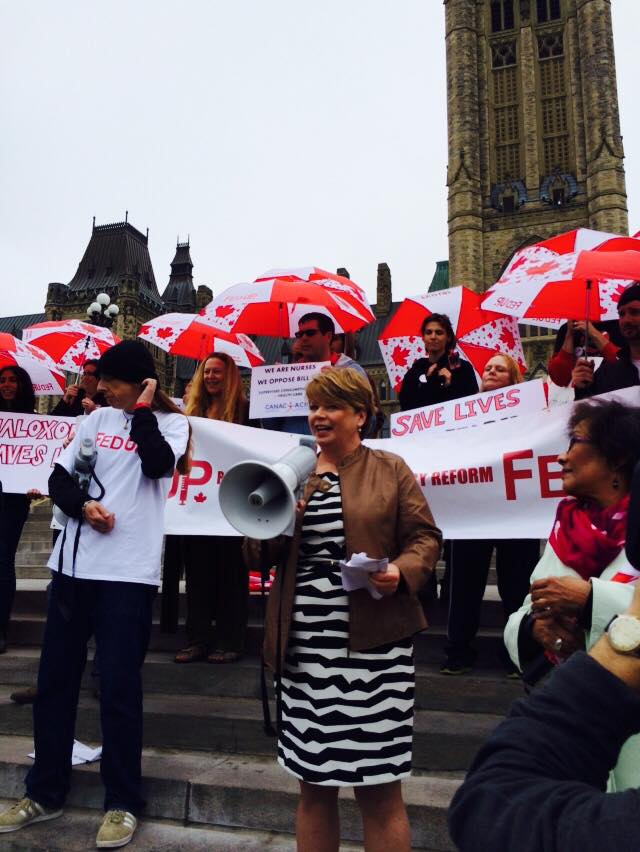 “I don’t think from the stats that have been reported in the Sault that we can wait –or that waiting is even ethical. People are dying today and we have it in our power to see that they don’t die from overdose by providing these services and nobody seems to want to jump on that,” remarked May.

May has proposed the idea of establishing a mobile observation tent that addresses risk associate with injection where they are occurring. More so, under section 56 of the Controlled Drugs and Substances Act, May has applied to the Ministry of Health for an exemption to provide emergency services through the provision of an overdose tent in Sault Ste. Marie. Her letter to the Minister of Health can be found at the end of this article.

Though overdoses do not seem to be happening in public venues in the Sault, May asserts that an observation tent establishes an important message in the community.

“I can think of a good reason for doing this and that is to build the trust and the relationship between substance users and the people that care for them. It’s a bridge to communication, it’s a bridge to health services, and it’s a bridge to social services,” remarked May. “A lot of people who use drugs on the streets of Sault Ste. Marie do not have community, they feel ostracized. They feel stigmatized and shamed for what they are doing. And as long as we treat this as a policing situation and not as a health situation, we’re going to continue that stigma and shame and they’re not going to recover from substance use. We’re going to continue to drive them into the ground.”

May relies on information from a few remaining local contacts and the local news to acquire information about what is happening around addiction issues in the Sault and how the community is dealing with an overdose epidemic recently declared by the Sault Drug Strategy Committee.

“It seems to me the papers and the media are more willing to write about the busts that police make, and reportable information from the Courts and the streets about what people who use drugs are doing, rather than from the fact that a family has lost another soul. That’s what I’ve seen,” stated May.

May also expressed frustration regarding the challenge associated with accurate and timely reporting of overdose statistics. May calls for greater transparency and issues task to agencies to reveal this information as it occurs.

“The information of where people are od’ing or dying by overdose is not accessible to the citizens of Sault Ste. Marie. And that has to stop – it has to be reported and recorded properly so that we know the actual crisis we are in. It’s sad that a person from outside the community can come in, ask the question and not get a straight answer. Citizens need to be educated about what is needed and how things can be properly treated.”

May refers to the overdose epidemic across the country as a “poisoning crisis”. Recent reports, local and national, exposes that illicit substances, even marijuana, have been tainted with fentanyl or synthetic fentanyl, and carfentanil –a synthetic of fentanyl, created for use as an elephant tranquilizer. The overdose epidemic rolling across the country has been attributed to these deadly substances.

May, who has become a national and international advocate for drug reform and compassion for substance users, wanted to make it clear that she hasn’t blown into to town to just make some waves.

“My only purpose in asking these questions is to save lives. My daughter died unnecessarily. She was an addict. She was part of the addiction crisis and now we are dealing with a totally different crisis- it’s the overdose crisis. And it’s completely unnecessary. These are usually people using recreationally or for the first time, not suspecting what’s in the drugs that they are taking, not even recognizing that they could die from it- and dying.” 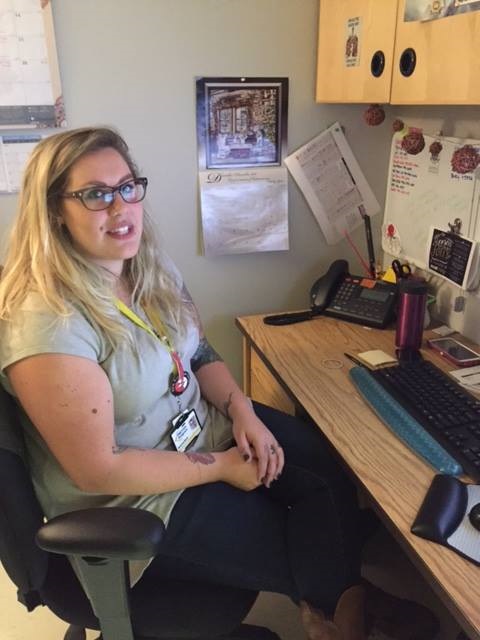 Beck shared that in addition to expanding harm reduction services in the community, as mentioned above, the Sault Drug Strategy, composed of public health, counselling, educational and policing services will be looking to include individuals with lived experiences around addiction –perhaps living with their own addiction or loving someone that does.

In the meantime, Beck emphasized that providing harm reduction isn’t the only response required to address substance use in Sault Ste. Marie.

Responding to a recent ‘localized’ event where an individual was spotted in public shirtless with a syringe hanging out of his arm prompted a sharing of pictures and various comments on social media. Though many in the community are working to provide compassionate support to those haunted by addiction, there is a significant contingent in the community that share a less empathetic viewpoint as evidenced by following comments of the incident: 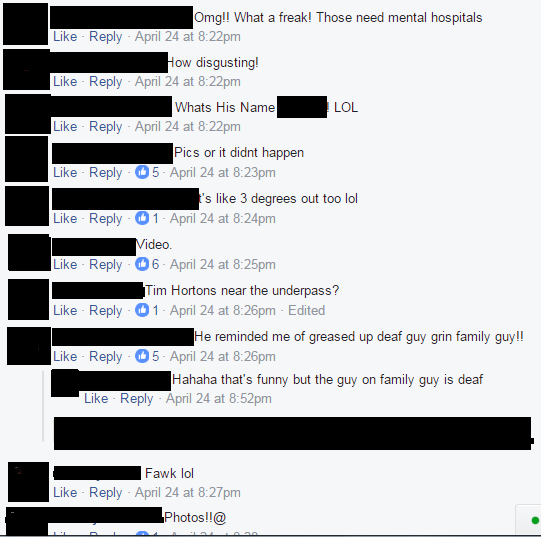 However, the lengthy thread did contain some comments from individuals who called for more understanding for those in bondage to addiction: 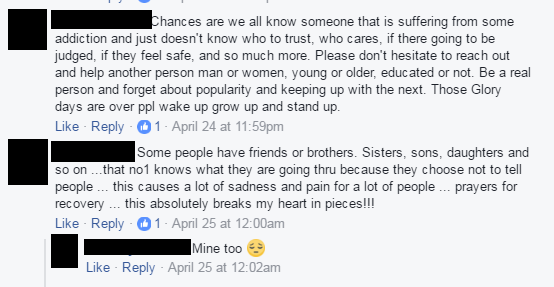 May spoke of the need for greater compassion in the community- all communities, calling out the elected in Sault Ste. Marie. “Ignorance can be defined by the lack of education and the unwillingness to learn. Small cities, small towns, small communities have always been willing to hide behind the skirts of one or two people and follow them so that they don’t have to make decisions for themselves on their own. It’s follow the leader. So until you get to the leader-or the leadership, and educate that person, so they can then educate below them, you’re never going to have a solution that takes away the stigma and the shame from substance abuse. We need to educate the community and that is the goal of people like myself-substance use is a health condition that can only be treated with health resources.”

In the meantime, May is resolved in her pursuit of a safe injection site for Sault Ste. Marie. “If I determine that it is necessary to have an overdose prevention tent in Sault Ste. Marie I’ll put my liberty on the line and I’ll open one. Or provide safe harbor to substance users to be sure that they use without overdosing and dying.”

Of her conviction that the community needs to be more proactive in addressing the opioid and overdose epidemic May added, “Citizens of the Sault have to stop being ostriches. It’s here. It has been here for a very long time. Do you think it’s not going to happen to you? It does. It happens in any family, to anyone. What are they going to do? Are they going to wait until it happens to them and then react?”

Below is a copy of the letter Donna May penned to the Minister of Health seeking exemption to establish an emergency injection site in Sault Ste. Marie (hover your cursor at the end of the page to select ‘page 2’):