Trending
You are at:Home»Environment»Pointe’s Residents ‘Shocked’ as Neighbour/Developer Clear-Cuts Wetland
By Steffanie Petroni on June 24, 2017 Environment

Several Pointe Louise residents are losing sleep this week as Jeff Avery, neighbour and a local developer, proceeds to clear cut his 102 hectare property. Composing just over half of his property is the Pointe Louise wetland- a coastal wetland, where Avery has begun clear cutting as indicated by aerial photos taken this week.

“We are just sick about this. We thought this was over. Everybody is sick about this. Just sick. Nobody can sleep at night. This is affecting the whole neighbourhood” commented a Pointe’s resident.

Avery has also confirmed to the Northern Hoot that he is “harvesting his property” and has chosen the southern end of the huge lot -where the wetland is located, stating, “There is more room and an established landing there, so we are skidding all the wood to the north.”

Many Algoma residents are familiar with the ongoing battle between the developer and a group of concerned citizens.

In 2006, Avery put forward his first application to the City of Sault Ste. Marie to acquire a permit for his Pointe Estates project – a 91 home subdivision on the wetland complete with a man-made canal. Avery was routed by the City to the Conservation Authority. His application was denied in accordance with Ontario Regulation 176/06 which prohibits development on a wetland. The request also contravened the City of Sault Ste. Marie’s bylaw that stated any wetland over 2 hectares could not be developed and areas closer than 90 meters to the perimeter of the wetland also could not be developed.

Avery persisted and a citizen group called the Pointes Protection Association was formed. The PPA was composed of Pointes residents who opposed the development, and advocated for the protection of the wetland. The matter was eventually brought before the Sault Ste. Marie City Council in 2013 where Avery was denied his application to develop for a third time.

So Avery appealed to the OMB and was denied there as well owing especially to the 2014 Provincial Policy Statement which prohibited development and site alteration of all coastal wetlands-such as the Pointe Louise wetland, in the Algoma district –as well as other regions, unless no negative impacts upon natural features and their ecological functions could be demonstrated.

Avery then filed an Application for Leave to Appeal with the Divisional Court where the adjudicator upheld the OMB decision and Avery was denied again. A lawsuit to the tune of 6 million dollars was filed by Avery against the citizen group, Pointes Protection, and remains before the Courts today. (Readers can check out our archives if they require more background on this saga.)

According to a Pointes resident, two weeks ago people began observing some activity on the wetland –people walking around the back bushes, a back hoe spotted on a trail, and then a neighbours flight to Toronto provided an eye in the sky view of what was happening down below. 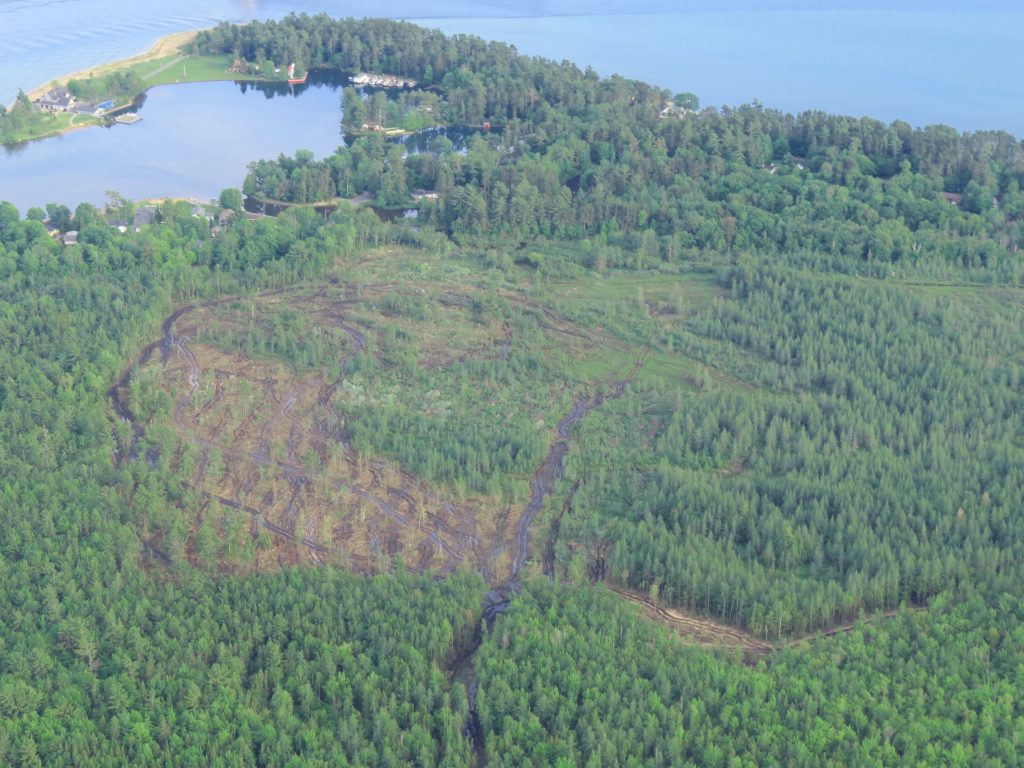 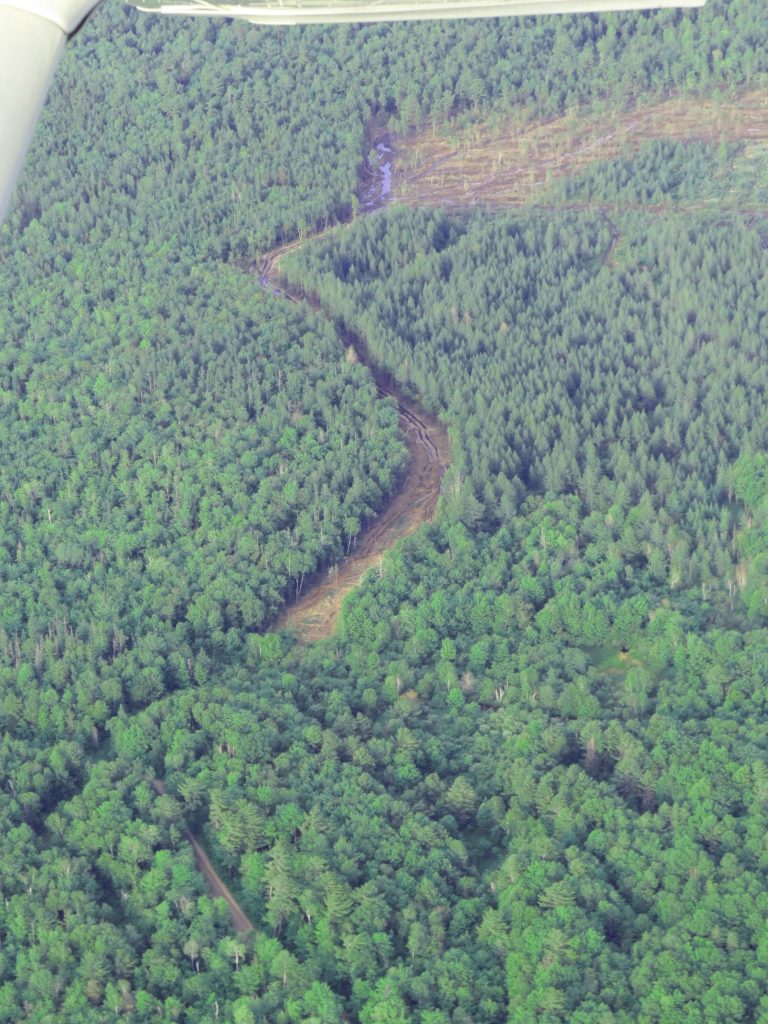 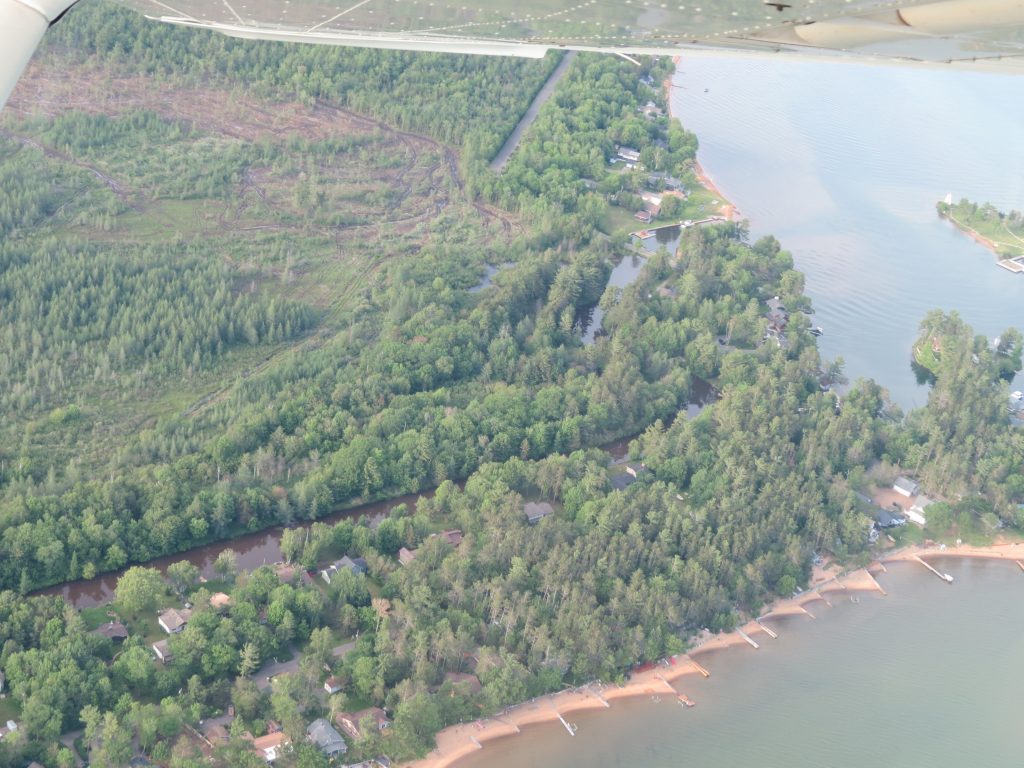 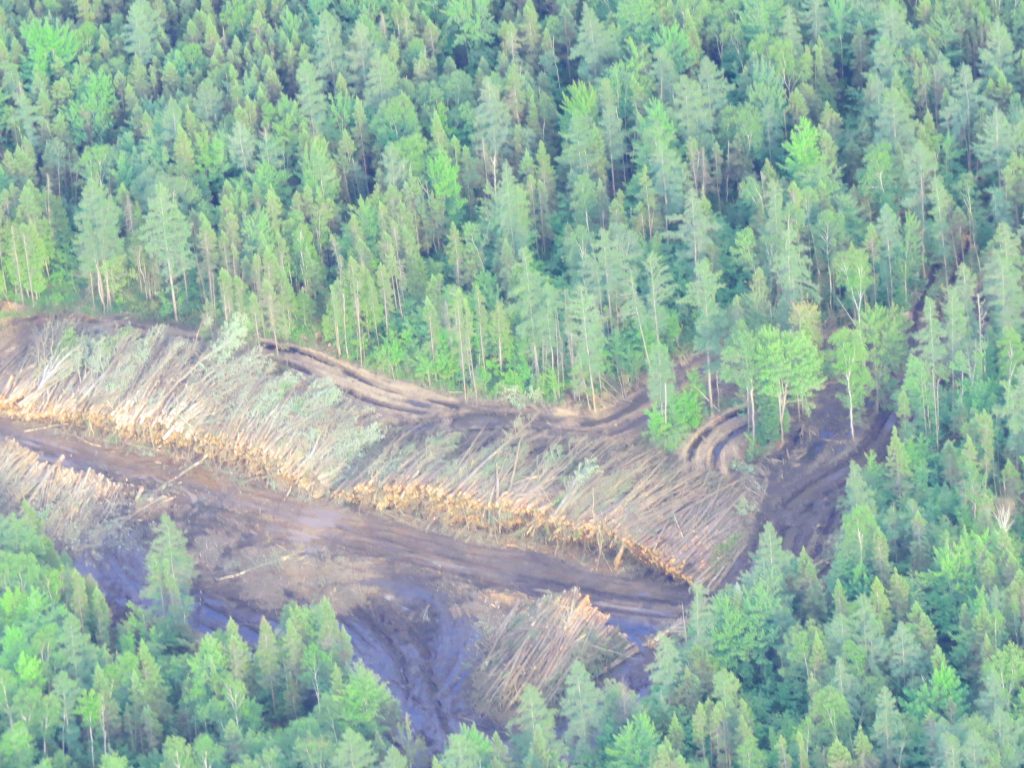 “Then all of a sudden there’s all this machinery in there –back hoes, skidders and feller bunchers,” remarked the frustrated resident. “He is cutting into the wetland. Not on the other parts of his property. Those trees are part of the ecosystem. And he’s digging trenches from the wetland and through the bush.  He’s trying to drain the wetland. He’s just destroying the wetland and nobody is doing anything about it. And it’s against the law.” 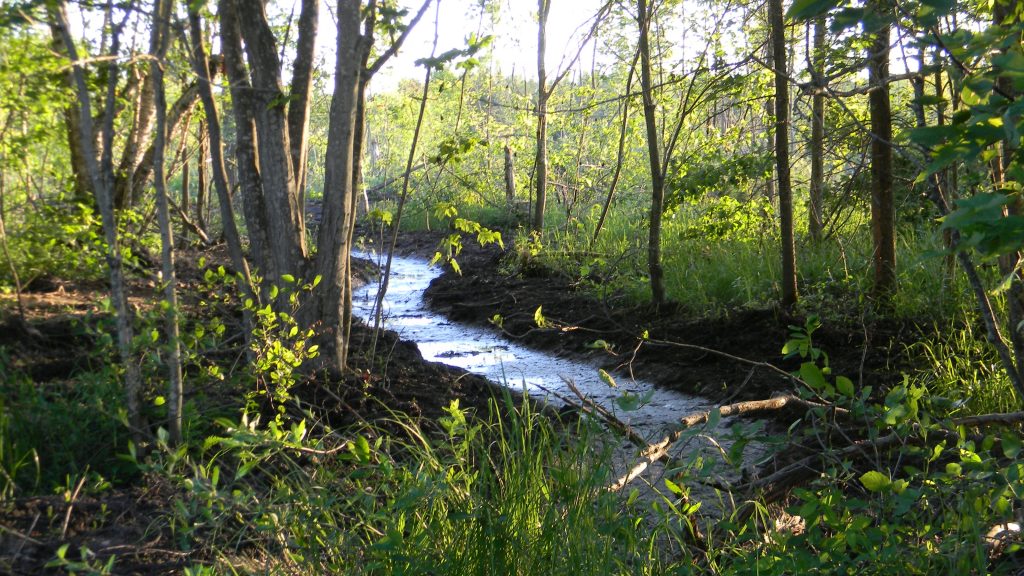 Images of activity on the property taken from the road. 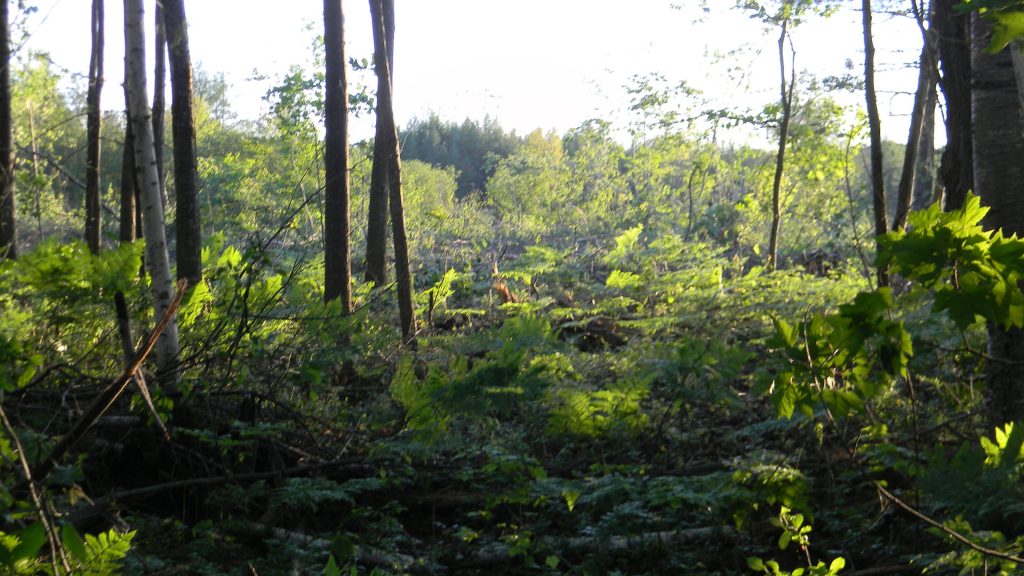 Avery denies digging any ditches stating, “I’ve only cleared out some growth in one of the existing ditches. And then I placed straw bales to keep the sediment on my property.”

Residents reported the activity to the Conservation Authority.

Rhonda Bateman, SSM Conservation Authority General Manager, commented of the situation, “We have issued a violation notice to the property owner and we have heard back from him. And we’re continuing the process here at the Conservation Authority. We can’t jump in and issue stop work orders or that sort of thing. That’s something we are not able to do so we’ll wade through our process here.”

The Conservation Authority is not permitted on Avery’s property because Avery has not submitted an application for development and he has no intention of doing so. 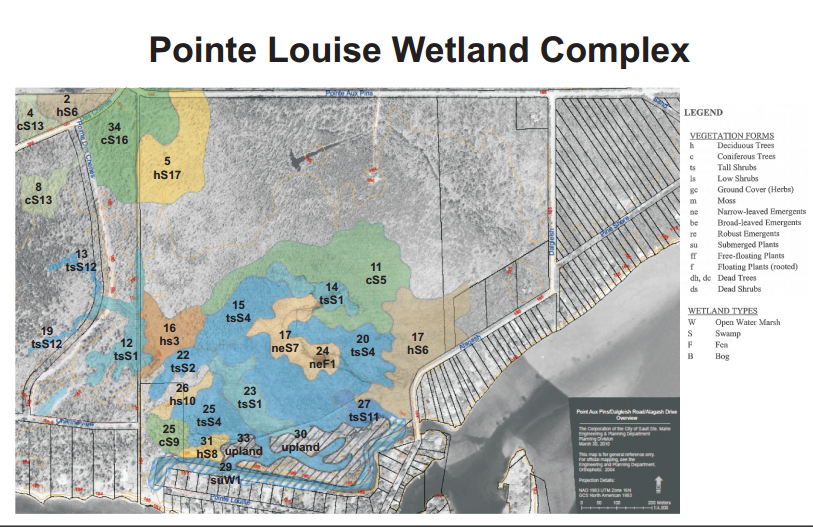 Avery anticipates that most of his property will be cleared by the end of the year. “With the exception of maybe a buffer around my daughter’s and brother’s home,” he said, adding, “And I’m leaving a perimeter around what I call the wetland –right off the causeway. I’m leaving the large white pine and stuff like that will be staying. I’m not trying to make it look ugly. Yeah, some people aren’t going to like

it but when it’s all said and done, I think it’ll be nice.”

“He’s left like a strip 25 feet wide of trees and you can see right across to the other side now,” remarked a resident. Avery’s property is encircled by three roads- Alagash, Pointe Aux Pins and Dalgliesh.

“I’m just trying to get some money back and I’m improving the property,” commented Avery. “Harvesting is healthy otherwise old tress rot and eventually burn.”

Avery plans on chipping harvested wood, or possibly selling as firewood. “Whatever I can do with it. Whatever I can market it as. I need the money,” he said.

Once he clears the property Avery will consider what to do with the 102 hectares though he has already contemplated the possibility of a solar farm or perhaps agriculture farming. “I don’t know about carrots,” he said when pressed. “But maybe cows or pigs.”

However an expanded wetland resulting from clear cutting might leave Avery with only rice paddy fields as an option- should development be permitted. Without trees to draw water from the wetland, the water table will rise. Fortunately for Pointes residents, Pointe Louise is a coastal wetland which should ensure that excess water will flow into the St. Marys River, preventing flooding in the area.

Regarding jurisdiction, Bateman clarified the Conservation Authority’s role is to ensure hydrological functions of wetlands are protected. “We don’t have permission to stop people from cutting trees on their property and there’s no city by-law against people cutting trees on their property. Our regulations are focused on interference with the wetland so that’s what we’re communicating.”

Though residents are insistent that the wetland- including hydrological functions are being interfered with, and the photographs are compelling, Bateman reiterated that Conservation Authority staff is not permitted on site and are therefore unable to determine if Avery’s activity on the coastal wetland is resulting in a negative impacts to it’s hydrological function.

“We’re working through our process which may be slow,” commented Bateman.

“By the end of this week the wetland will be completely clear cut,” remarked a neighbour.

A spokesperson for the City’s planning department declined to comment Friday stating that he did not yet have enough information on the matter to do so. 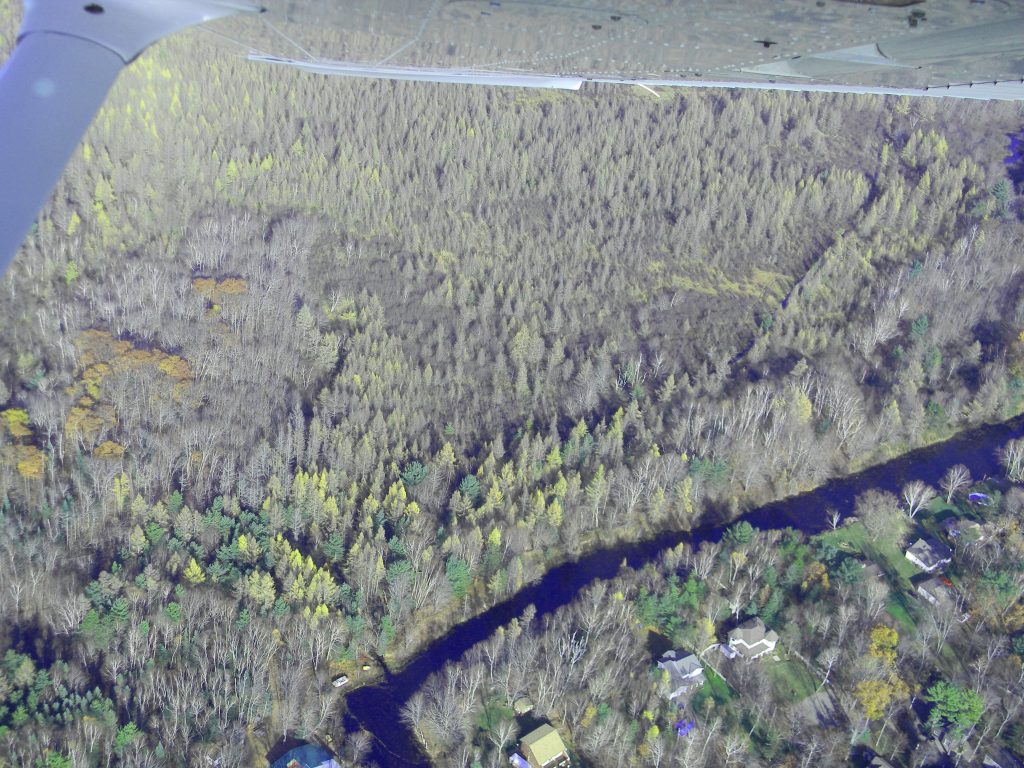 Residents are livid with what they feel is the lack of accountability from any authoritative body. “Where is everybody? Where are all our governments that write all these laws? Why are we, community people, the ones being the spokespersons? Where’s the government? Who’s in charge? Who enforces these laws? Those are the questions. The City is denying responsibility and even the Conservation Authority is saying they only deal with hydrology. I understand the Conservation 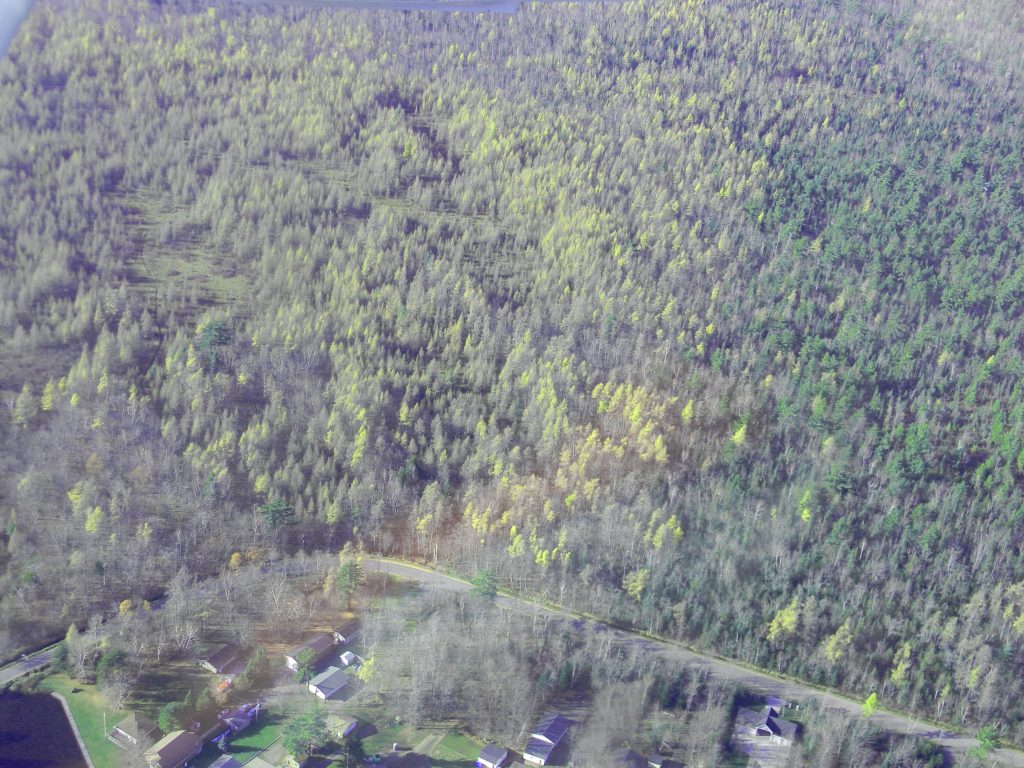 Authority’s hands are tied because they’re dealing with politics and the Board is all political, but this wetland has been destroyed.”

Residents are also concerned about the impact to wildlife in the area. “The wetland is also a deer yard. The deer live there. The deer are going to have nowhere to go. Who’s looking after the deer? Not the MNR. The list of nobody doing anything goes on and on and on. 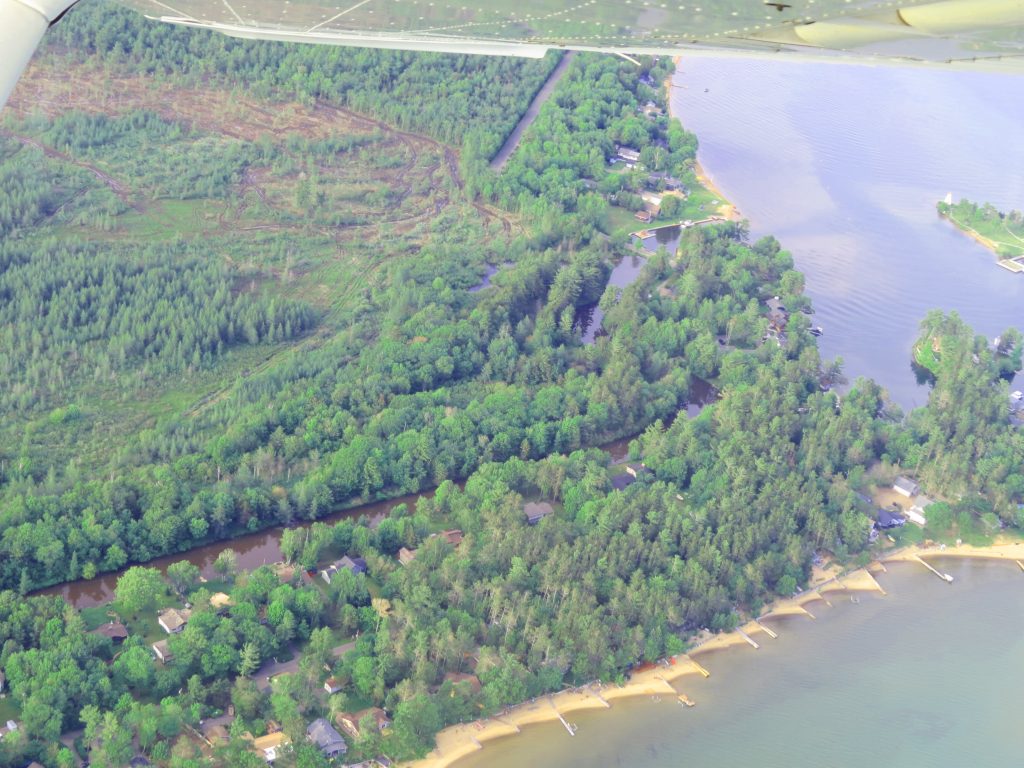 After Clear-Cutting this week. Avery anticipates most of his 102 hectare property will be cleared within a year’s time.

As far as Avery is concerned, anything he does is open to scrutiny by environmentalists and he’s tired of it. “It’s not their property. It’s private property. Out there it doesn’t seem to matter what I do, I get a reaction. If I walked down the road, I’m sure I’d get a reaction.”