Trending
You are at:Home»Economy»Northern Ontario|Taking Care of Our Land: Both Sides of the Treaty
By Guest Author on May 13, 2015 Economy 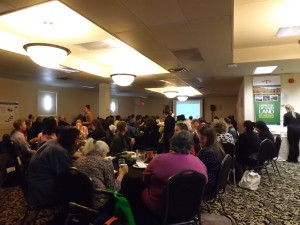 On May 4-6, the symposium, Taking Care of Our Land, was hosted by Algoma University.

Taking Care of Our Land was an experience in time travel. Aboriginal storytellers and scientists wove together the past, present and future of First Nations’ relationship with and responsibility to the land, to Mother Earth, which nurtures them, sustains them, governs and guides them, in return for one thing: that they take care of the land. This is not about ownership. Even before the first European explorers and colonists “planted firm” their respective flags and claimed the land for their respective countries of origin, the Aboriginal peoples had already had a 20,000 year co-existence with the natural world upon which their survival depended. If the people of the First Nations saw the land as their spiritual centre, the settlers saw only the potential for wealth from limitless natural resources which they took without permission or compensation.

The symposium was about mapping the cultural boundaries of Aboriginal and non-Aboriginal viewpoints to see where the edges overlap so that reconciliation, relationship building, and decision making could occur within the margins of two very different kinds of knowing and understanding of humankind’s relationship with the land—with the natural world.

Essentially, there are two ways of knowing and understanding the meaning of human experience: personally and intuitively through all human senses, and scientifically through observation, research and methodology. What was remarkable about the presenters was that although nearly all of them were Aboriginal, their educational degrees was a compendium of PhDs, MScs, BScs (Honours) which had been earned through the scientific method. And yet, every one of these presenters stressed the importance of working their scientific knowledge inside the framework of traditional knowledge and values. They acknowledged that it was often difficult to work within this framework in a non-Aboriginal setting, but that it was a cultural imperative for them to do so. From the scientific point of view, it was a one-way fit with little or no accommodation from the non-Aboriginal academia. 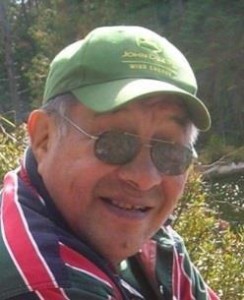 Although the wounds of the past may have closed, the scars remain and trigger painful memories. Several of the speakers could still remember the impact that residential schools had on their childhood and youth. And one, Elder Raymond Owl, told the story of the day that he and his father looked out on the river where they trapped to see from bank to bank, upstream and downstream, the river turned white with the bellies of upturned fish killed by the pollutants from a mill. It was a difficult moment for Elder Owl as he struggled for composure. But this was not the message that he had for the audience. What he wanted to say and did so was that whenever the natural world and the humans who live on that world are in danger from harm, take action. Even if this means taking an end run around those in authority whether Aboriginal or non-Aboriginal.

Chief Dean Sayers had a similar message. Once, he said, before the settlers came to the rapids and the river, the Aboriginal inhabitants lived in a pristine world. Nobody asked us, he said, it they could build Algoma Steel or the Abitibi Paper Mill. Nobody asked us if they could scrape the river bottom and send corruption downstream. Where have the whitefish with which the river once abounded gone? Any fish you catch from the river now, he said, are not native species. 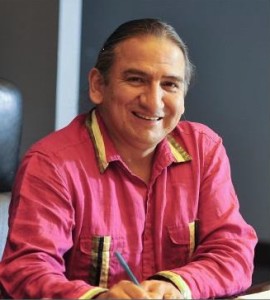 Chief Sayers has given notice. Having witnessed the damage to the land caused by industrial pollution, this Batchewana First Nation Chief has made it clear that no further industrialization will take place on Reserve Land without the permission and active participation of the Band Council their Natural Resources personnel. And, furthermore, without receiving 50% of the profits from such projects.

Neither the Ontario government nor the Government of Canada has the authority to interfere with an agreement which was made with the Crown. Chief Sayers made it clear that the overlapping between the boundaries of Crown Land and Traditional Land is not the issue. He states categorically that the land in question is Reserve Land over which the Batchewana First Nation has Sovereign Rights. Like Elder Owl, Chief Sayers has taken an end run around the middle of non-Aboriginal bureaucracy which through “interposition and nullification” has stalled the acknowledgement of Aboriginal Sovereign Rights of the Land and hitherto excluded them from profiting from the resources of the land in a fair way. 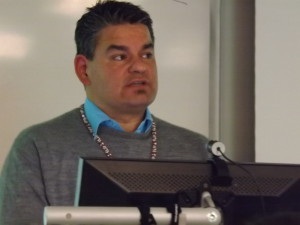 Chief Isadore Day, Serpent River First Nation, presented the approach of his people on sustainable development in conjunction with the environmental process related to major projects. He cited the need for community decision making that would emphasize conservation and environmental safety for the next seven generations of his people. He said that First Nation jurisdiction goes hand in hand with respect for the treaties and responsibility. He called on his fellow Chiefs for support in his bid for leadership of First Nations in their pursuit of self-determination. Chief Isadore Day has also given notice.

Skip Jones and Alice Corbiere told Garden River First Nation’s story of the development of the four-lane highway east of Sault Ste. Marie which began in 1973 as the result of accidents and fatalities that had occurred on that section of Hwy. 17 East that runs through the Garden River Reserve. Many issues had to be resolved before, during and after the construction of the new highway. Land issues, employment and related capacity-building opportunities which directly impacted the residents of the Garden River First Nation had to be negotiated and the bureaucratic intricacies of the Ministries of the Ontario government to be navigated. At several points in the development of the project, only the intervention of politicians such as John Rhodes, Ron Irwin and Bud Wildman enabled the proposed highway to go forward and prevent the project from foundering. Throughout the lengthy process, Garden River First Nation made it clear to the Ontario government that they control of the project and that the project must address their traditional values and needs and profit them economically.

Bud Wildman, former MPP for Algoma, was present to confirm the details of the Garden River First Nation’s encounter with the Ontario government. He reminded the audience that a treaty has two sides. All too often, he said, First Nations are expected to adhere to the treaty without a similar commitment on the part of non-Aboriginals. 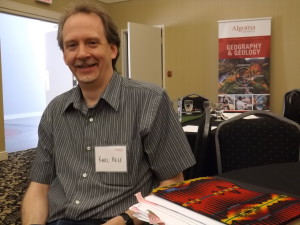 The final key-note speaker, Karl Hele, took the audience through a tangle of treaties and agreements made in the Bawating region over time which were not necessarily advantageous to First Nations and which have not necessarily been honoured by non-Aboriginals. By what right, he asked, by virtue of sticking a pole in the ground, did the explorers/colonists/settlers lay claim to land over which Aboriginals had a 20,000 year sovereignty? To draw a boundary which separated “American” Indians from “Canadian” Indians? To commit them to a future which neither understood not valued the Aboriginal world view?

And this indeed is the question. That the governments of Ontario and Canada have been reluctant to engage in reconciliation and resolution has prompted the First Nations to become pro-active and determined to bring about not only sovereignty of their land but their right to self-determination. They have taken an end run around the middle of “interposition and nullification” of their rights.

Aboriginal self-government is based on collaboration and co-operation for the collective good of humans, their fellow creatures and Mother Earth. It is a model that all governments might do well to emulate in face of the environmental dangers which now confront all inhabitants on this planet.