It was almost midnight and Robert Bell slowed to a crawl before Big Mawgi Lake knowing it would be unwise to cross. His sturdy fourteen foot aluminum boat was small for the big noisy waves being blown up by a cold unremitting October wind. The motor growled and sputtered as he held in the shallow narrows joining big and little Mawgi. Waves brought him way up and sometimes the bow smacked hard coming down and in the shallow of the waves while going down them he could see the faint glow of white sand and submerged weeds shifting with the water below his bow. Under bright starlight and a rising quarter moon making an undulating glittering path from the far horizon the seasoned northerner watched and reasoned unreasonably against what his senses were telling him.

Long faint glowing crests came out of the darkness, coming high into the narrows between open fields and the dark trees blew wildly on both sides of him. He’d grown up in the small town seventeen miles behind him upstream, been on the boreal lake hundreds of times and never seen waves like these.

If I get through the narrows that will be the worst of it, he thought and could smell fresh beer in the cold air from bottles broken during the unusual violent banging over choppy Little Mawgi.

It was a mile and a half to his cabin on the west shore deep into the dark bay to his left, the only one on the entire bay. If he navigated straight to it riding on the length of the waves he knew he’d overturn quickly. Riding against them at an angle was safest and when out far enough, carefully turn back to his cabin. Turning back was risky when they were bigger than a couple feet. He’d risked rough water many times and was proud of his natural abilities but these waves might reach almost four feet. He knew Trudy was waiting, burning balsam in the cast iron stove worrying and he regretted not coming back earlier.

“Don’t forget butter. And get another case of beer in case Gilbert and Eva come over!”  She snapped over the churning motor that morning, walking in the water pushing the boat from the beach. The sky was bright infinite blue and a cool breeze rippled the lake and she wore green wading boots and a wool sweater and her black graying hair was in long pony tail.

“And never mind parking your ass at Andy’s all day. You come right back!”

And he had smiled and waved, turning his boat into the lake.

The hour ride on the river under bright stars through shadowy swaying evergreens and leafless poplars had been cold and getting wet on Little Mawgi sobered him completely now. He moved slow trying to make up his mind, up and down, holding in the narrows. Small clouds lit bright white by the moon started emerging over the length of the horizon at the far end of the lake, moving fast against the stars and perfect darkness. Almost involuntarily he reached for a life jacket and put it on knowing if he capsized it wouldn’t do much against the cold water. His canvas parka was almost soaked through, damp on his skin and an unrelenting chill set in, made worse by the cold gusting. Before him the tumultuous lake was transformed into something ominous under the stars. In the day it might not have seemed so forbidding and he felt uneasiness that for a brief moment came close to fear and he resented the feeling. Defied it even and had a flash of irrational contempt towards the unruly Mawgi for making him feel it. He turned the throttle slowly, feeling out the big waves then the motor’s pitch climbed and he headed into the dark open water. 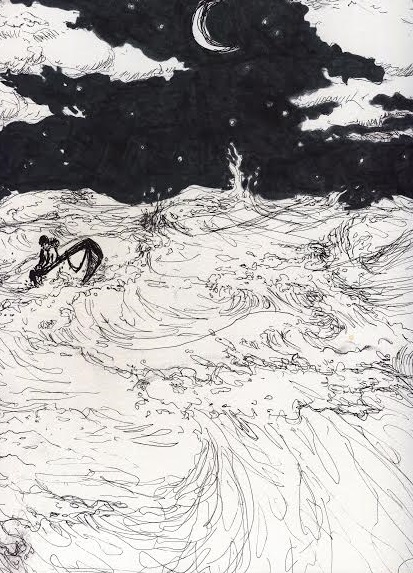 Cold spray from the slamming bow whipped his face, soaking him thoroughly, banging hard over and over and things began floating in the bottom of the boat. He bailed with a white plastic bleach jug cut open at the top but it was difficult while trying to hit each wave perfectly. Sometimes one would emerge with a long high crest bigger than the others and several times his bow was almost overcome by them.

After fifteen long unnerving minutes he knew he was deep into a terrible mistake. He couldn’t bail fast enough and taken in too much water. Now far enough out in the lake he would have turned towards the small beach, to the warmth and smell of burning balsam but with almost a foot of water he’d surely capsize if he changed course. He decided to continue against the waves, straight to the far end of the bay not a mile away, hoping to hit the dark uninhabited shore before swamping.

Then he saw it coming, a high crest, and the boat felt very wrong with the shifting water. He zippered his life jacket all the way up, his boat rose high, and instead of climbing the next big wave his bow drove through, flooding completely and the next one rolled it upside down. His life jacket brought him quickly to the surface and he gasped and sucked in cold air. He kicked his legs and arms hard trying to reach his overturned boat but the white bottom rose and fell further and further away until he knew it was impossible to reach.

He paused for a moment, drifting with the noisy waves in the dark, sometimes gasping and choking when one went over him. Rising on a wave he thought he saw the dull light of his cabin on the dark far away tree line and began desperately swimming. For ten minutes he struggled against the draining cold until he could hardly raise his arms and the dark shore seemed far away as ever. With meaningless exhausted stokes he continued until he couldn’t and would start again. Finally, unable to lift his arms he rolled on his back letting the waves bring him up and down, not feeling the cold anymore certain he was going to die.

His eyes closed and opened again to see the small dense arrayed glowing clouds almost above him now, moving quick, brighter near the horizon by the rising moon, and he was struck with a deep yearning to be with his wife. Not just to be out of this situation but because of an overwhelming awareness. Something always there but unveiled completely for the first time.

He thought he heard a motor droning faintly over the waves but dismissed it thinking his mind was going as the cold was taking him and the sky began to fade into mist and darkness and he closed his eyes.

He could smell fragrant cured balsam and hear a fire crackling lazily in warm quietness and thought he was dreaming. He opened his eyes slowly to see the pine ceiling and rafters he’d built. He was too weak to sit up and looked over at Trudy, Eva and Gilbert sitting at the kitchen table.

“Well hallelujah!” said Gilbert and they came and stood by him lying on the couch under heavy blankets and his down pillow felt wonderful. Trudy sat taking his hand from under the blanket and held it gently and there was relief and softness in her eyes.

“It was James Samikee. He said he caught up to you on Little Mawgi,” said Trudy. “…staying behind you all the time. Lucky for you, he was going to stock his cabin with supplies for trapping. He said he knew you weren’t going to make it you idiot…He came right into the cabin with you…”

And she stopped, ready to cry and pulled it back in.

“…he had you over his shoulder and I thought…” And she couldn’t go on.

“Damn Samikee and his big steel rust bucket! Could ride the ocean with that thing.” said Gilbert. “I think he’s going to be okay,” he said looking at the women and then back to Robert. “And you did some talking while you were out of it today old buddy, let me tell you…I mean the things a man says when his guards down….”

And Trudy silenced him with a stern look. Robert raised his hand to her cheek and cupped it tenderly in a way he’d never done before, smiling into her face and she put her hand over his wrist and rubbed her cheek in his hand.

“Well what can I say…” said Gilbert shrugging. “…but if you need us we’ll just be down the beach where we always are.”

“Let’s get married. It’s been over twenty years. Why didn’t we get married Trudy?”

“You didn’t want to. Remember?”

“Well, were getting married.”

He closed his eyes settling deep into the softness of his pillow thinking how much he loved her and why would Gilbert and Eva be down the beach when their cabin was on the other side of the lake. He opened his eyes and the small white clouds were drifting over him now, moving fast beneath the stars set in perfect darkness.