Editor’s Note: The decision to publish this story was influenced by the belief that the public should access information in a timely manner, allowing opportunity to provide criticisms about the judicial process. For five years the public has been denied information about the death, decapitation and dismemberment of Wesley Hallam. Though a plea deal of manslaughter for the three men accused in Wesley’s death, decapitation and dismemberment has been accepted by the Crown Attorney, a publication ban on the evidence presented in one of the longest- if not the longest, running preliminary hearing, remains in effect until a judge lifts the ban. Though attempts were made to acquire comment from one of the accused’s lawyer as well as Sault Ste. Marie Crown Attorney, none were received before the time of publication. The article below has been informed by the mother of the victim, Sandra Hallam, during an interview at her home on Saturday, July 16th, 2016.

On Friday Sandra was going about her regular morning routine when she received a call from an officer who has served as an investigator in her son’s death. There’s been a development, he said of the case that is currently before the Superior Courts. It’s bad isn’t it, Sandra replied. It depends on how you look at it, he said.

John Luczak, director of Crown operations for the north region, was in town and needed to pay a visit to Sandra. Dreading what information could be heaped upon the pile of evidence that had accumulated over the past five and a half years since her son’s death, Sandra gathered her daughter, Shannon, and her parents in the family home to await the harbingers.

Luczak, two officers and eventually local Crown Attorney, Kelly Weeks, gathered in the Hallam’s kitchen. Their news? After five and a half years of investigation, 60 witnesses, hundreds of hours invested in a preliminary hearing and 3 million dollars towards all of these costs, a handful of Crown Attorneys took a vote that resulted in accepting a plea of manslaughter -10 years, including time served, for three men –Dylan Jocko, Ronald Mitchell and Eric Mearow, charged in the death, decapitation and dismemberment of Wesley Hallam on January 7th/8th, 2011.

“We were devastated,” wept Sandra. We are sitting at a picnic table in her backyard under the shade of a maple tree. The cigarette she holds between her fingers burns down until she flicks the ash into the ashtray. “How can the Crown just dismiss my son like that? It’s ok to kill my son? It’s ok to cut up my son into pieces? …on the technicality that they were intoxicated? The Crown said that the case had too many frailties because these monsters were drunk when they did that to my son.”

Given that authorities did not apprehend the co-accused for weeks after the incident it is boggling that a determination could be formulated that these three men were too under the influence to be held accountable to the original charges maintained by the Crown Attorney for five years- first degree murder and indignity to a dead human body, and never mind the testimony evidence provided by an assorted five dozen witnesses. 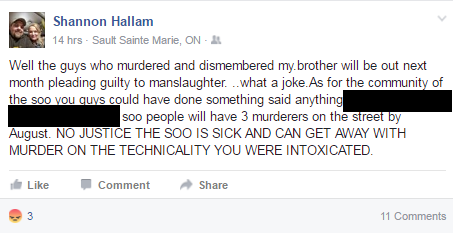 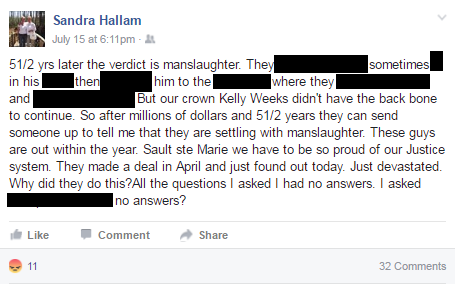 Sault Ste. Marie police have determined that Hallam was killed at a well-attended house party. His body was discovered on January 11th, 2011 along Landslide Road in a ditch near Cold Water Creek. In March 2011, Sault Ste. Marie Police concluded their search of a garbage dump in Dafter, Michigan, just south of the Sault Michigan/Sault Ontario border. Some of Wesley’s dismembered body parts were recovered at that site.

A couple of months after the discovery of Wesley’s body, Mitchell, Mearow, and Jocko, were charged with first degree murder and being a party to indecently interfering with Hallam’s remains. At the time of Wesley’s death, he was 29 yrs. old and father to his then 5 year old son.

Three women were charged in conjunction with Wesley’s murder. Melissa Elkin was charged with indecently interfering with a dead body and accessory to murder after the fact. In November 2012, police withdrew those charges when Elkin plead guilty to obstructing justice. Ontario Court Justice Nathalie Gregson was satisfied that Elkin had served a sufficient amount of time and released her back into the community- time served. Kayla Elie was also charged as an accessory after the fact to murder and obstruction of justice. In 2013, two years after her arrest, Kayla Eli received a conditional sentence that was served in the community. On January 28th, 2013, Jaclyn MacIntyre was found guilty of obstruction of justice by interfering with the police investigation into the murder of Wesley Hallam. The -charge of accessory to murder was dropped after MacIntyre plead guilty to the lesser charge of obstruction and she was released back into the community.

Sandra recalled of the meeting this past Friday that Luczak, Weeks and other members of the courts had knowledge that a plea of manslaughter would be accepted by the Crown as far back as April 2016. This past June, the defense for the co-accused returned to court, as did the Hallam family, to argue pre-trial motions. Sandra questioned Weeks absence in the courtroom during that week. “It all makes sense now,” remarked Sandra in a flat voice, her face expressionless. “The deal was done. There was nothing left to fight for.”

For five and a half years, the family and the media have been gagged by a publication ban. Publication bans are meant to be used only when absolutely necessary to protect vulnerable people involved in the judicial process. However, there are criticisms of publication bans, especially with the rate which they are enforced by the Canadian courts – with the same frequency that a kindergarten teacher issues gold stars on colouring assignments.

The irony should not be lost on the public that while publication bans are often sanctioned to ensure an accused’s right to a fair trial, for these three men charged in Hallam’s death and the gory details that followed it, there will be no trial. There will be no jury that ‘might’ have been tainted by preliminary hearing details because, for better or for worse, a handful of lawyers got to decide the best outcome for the accused involved in these crimes. An elite select of lawyers got to determine the measure of justice for the victims of this crime. And a privileged consortium of attorneys got to decide what would be in the best interest of a community.

The fact that the media serves as watchdogs for the public should never be lost. Though a publication ban impedes publishing details of hearings through media outlets, including citizens who post on social media, it does not preclude a journalist, or the publics, right to attend the hearing or their right to access official court records. However, to suggest that open courtroom proceedings mitigate public ignorance and inaccessibility to information about the judicial process, presumes that the public attends court- which they do not.

Nobody is naïve about the fact that plea deals are a routine part of the judicial process. But the public should question the influence of publication bans upon the ease of which such bargains are forged. If members of a community were aware of the details presented in a hearing where a publication ban has been enforced, would situations such as the plea copped between the defense and the Crown on the matter of Hallam’s death, ever arise? Would the courts, held to higher level of transparency in the absence of a publication ban, be forced to a higher level of accountability? Where publication bans are not required as per the Criminal Code, would there be a greater degree of justice meted out through the judicial process? And where publication bans are not enforced upon criminal cases, would the informed community be more concerned about and invested in the final outcome? 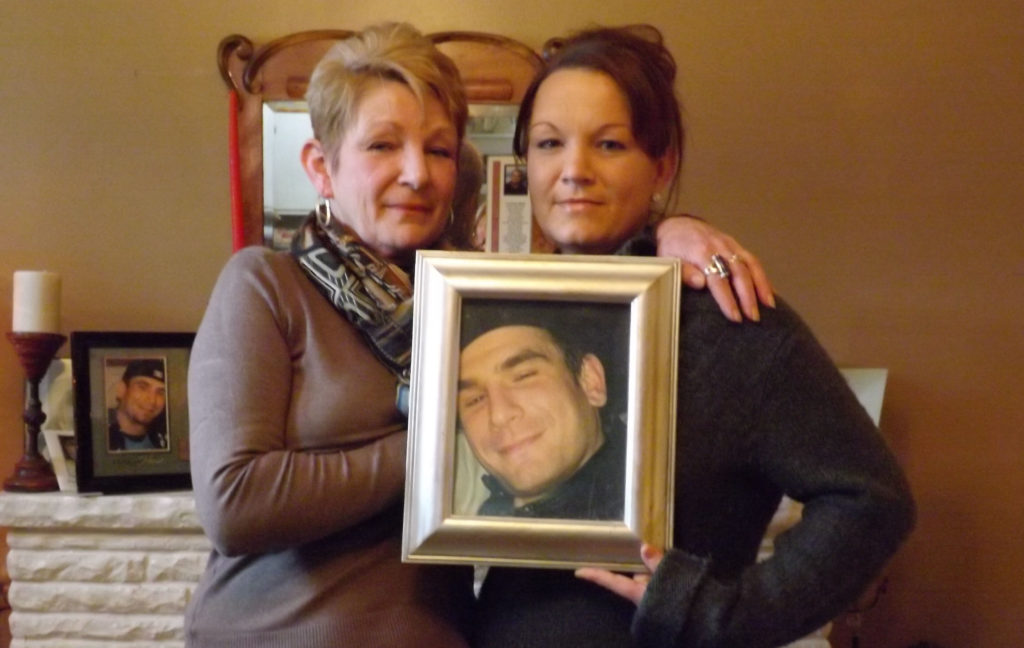 Sandra feels that her family, and especially her son, have been robbed of justice with Friday’s announcement from the Crowns. She is at a loss for words. She weeps with abandon. Sandra, through tears, wondered out loud would she have more answers about her son’s death if the matter went to a jury? “I have a right to know why they killed him. Maybe I don’t want to know -I don’t know.”

There is no comfort for a mother that has lost a son to such horrifying events. For Sandra, never having had been able to lay Wesley to rest has pained her all these years. Though it will never provide a comfort to her, Sandra takes some refuge in the fact that once this judicial ordeal is over, Wesley’s remains will finally be returned to her. “Now I get to bury Wesley. And that means so much.” Sandra is quiet for a very long time, her cigarette burning dangerously close to her knuckles. “I don’t want to say good-bye though. I’m so afraid to say good-bye to my son. What mother should have to say this?”

Of the unfolding events this past week and what may lie ahead, Sandra delivers a succinct message to the community. “Be aware. And beware.”

Jocko, Mitchell and Mearow will be back in the Sault Ste. Marie courthouse on July 28th, 2016 and the defense will enter their plea of manslaughter. At that time 1 of 3 actions by the judge could occur:

At that time Sandra and Shannon will be provided their opportunity to read their victim impact statements. As has always been the case for over five years, though a publication ban is in effect, any member of the public may attend this hearing.

Update: Since publishing this article a petition has been established calling for justice for Wesley Hallam and his family. Readers can check that out by clicking here.