Thirty-two year old Simon Adler appears meek and even a bit timid, a nondescript annoyance ahead of you in a coffee shop line, forgotten almost immediately when out of sight. He weighs consistently between one-fifty-two and fifty-six without effort, never smoked and abstains from strong drink. Five-seven and balding he likes to keep the hair around his shiny tanned crown short and freshly trimmed and his home, like his mid-sized sedan with an extended warranty, is in impeccable condition. The only thing different one might notice is he frequently has a yellow kayak on his car. For the last five years he regularly paddles a few hours two or three times a week along the coast of Lake Superior, never venturing to far from Sault Ste. Marie Ontario, the town he was born and it might be considered his passion.

He woke late because he’d taken a vacation day and planned to go to Marks Bay just fifteen minutes from his smoothly paved driveway darkened with plenty of sealant. He put on jeans, tucked in a T-shirt and secured his pants firmly with a belt high on his slim waist and went to the kitchen and sat with Bernie his six year old, neatly combed with hair still wet, dressed brightly in new jeans and yellow shirt. He looked up to his father, chewing on his last bit of toast and said “hi” without smiling. In the sunny white kitchen he thought his son’s head looked large and wet hair sparse and delicate and wondered if he was going to be bald too.

“He’s going to try riding on the bus tomorrow,” said his wife Sandra leaning against the counter with coffee.

“I talked to the principle and he told the driver about last time. He’s going to keep an eye out.”

“Bullies are everywhere son. You just can’t let them win,” he said looking at Bernie with firm assurance.

She turned and stared briefly with expressionless disbelief at the back of his head as he took his first sip of coffee.

When leaving with their son for school and work she half turned at the door and told Simon dispassionately over her shoulder she hoped he would enjoy his vacation day. After a quick breakfast he got in the green sedan with the yellow kayak already mounted and was off.

With the day open before him he decided to treat himself and go to the drive through at the coffee shop. He found his place in the throng of cars filling both lanes and looked with disdain at a rust eaten tailgate of a coarse idling pick-up with two young men he was stuck behind. The other vehicles were tidy S.U.V.’s, pricey trucks and sedans white and silver, and to Simon, all with purposeful destinations. 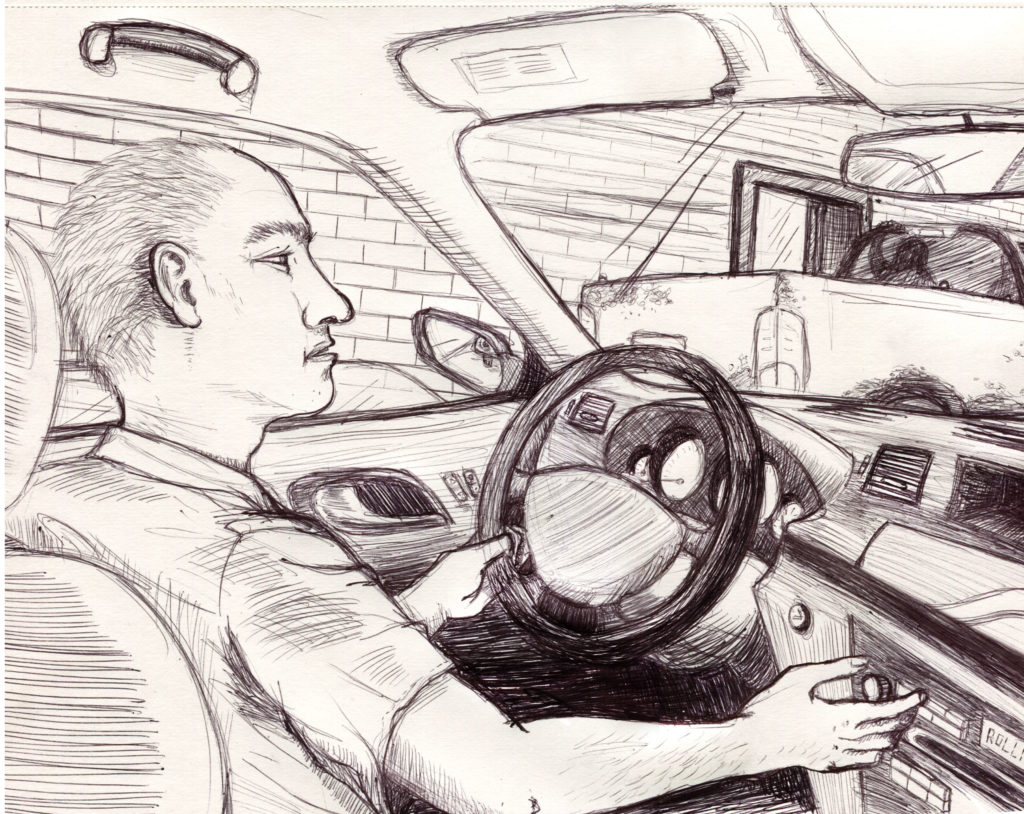 In the slow moving line with both his windows wide open a couple of cars away from ordering, to his horror, a blaring grinding metallic guitar riff blasted into the sunny morning making him jolt up involuntarily as it reverberated against the cars and red brick coffee shop. It was the opening riff to the classic Rolling Stones song Honky Tonk Woman made before he was born. When he looked up two young men in the rusted pick-up were turned around grinning at him.

Ignorant apes! Hillbillies! He thought with intense burning anger firmly gripping his steering wheel. He looked around and no one was looking in sympathy with him which was puzzling, no exchanging nods of disgust. Instead it seemed like they were avoiding looking at him.

The simple crunching guitar continued its assault as the singer broadcast to the involuntary listeners a seedy story of his relationship with a bar maid down in Memphis. Simon thought dark aggressions, none he could carry out and was even a little surprised at himself for their sincerity and severity. The young driver with collar length matted brown hair turned around, leaned out of his window and banged the outside of his door with celebration looking directly at Simon and went back into his window and slapped palms with his friends.

He was about to shout his order into the speaker-microphone against the music then noticed something was wrong. The acoustics were wrong and he paused briefly, confused, and then with horror looked down to his radio but was afraid to touch the volume. He struck at the nob with a quick turn and the music stopped. The embarrassment was so excruciating he was afraid to look around to see if people were looking to him and when he did to his relief and bewilderment nobody was. He was at a loss to figure why his radio suddenly came on at such a high volume and at the very beginning of the song. Perhaps the radio was always on but the station was temporarily shut down and maybe his wife had been using it yesterday.

He ordered his coffee and looked to the men and they looked back smiling one last time then off they growled and suddenly they weren’t sinister hillbillies but, if only for a brief moment, comrades reveling with him in rebellion. Like minded outcasts even. And from rage and intense embarrassment he went on to feel something strange and new some strange satisfaction with the whole experience and just a little indefinable resentment for the people in tidy vehicles.

On the bay he didn’t paddle timidly along the shore like he usually did but for the first time ventured far out, so far he couldn’t see his car anymore and the trees were just a thin green line and he paddled even further until he was out of the bay and close to the shipping lane before turning back. He pulled his kayak onto the beach and held up his wet hand to study it and it was trembling just a bit.

His wife was at the sink and they looked to one another when he came through the front door. She was puzzled by his expression but just continued rising dishes thinking without thinking.

He came from behind, wrapping his arms snugly around her waist smelling sunny and wind swept. She turned looking into his dark blue eyes startled and confused but before she could say anything he kissed her tenderly and she relaxed in his arms and they kissed together.

It’s not Friday, she thought, very pleased with his strange mood.