A Rough and Ribald Story of a Lifetime in the Bush

Winters up the line are cold. Some mornings you wake up believing you’ll crack if you move and that you’ll have to kick a hole in the air to pee. Now anything that severe, you’d want to keep an eye on. And so on a shelf outside my cabin, in the shade and out of the wind, I kept an Algoma Thermometer to tell the temperature. There was a mercury thermometer, but mercury freezes at 38 below F when it’s just getting chilly. Beside it would be a little jar of good strong drink, which tightens up at around 50 below F when it was just cooling off, and a jar of kerosene that hardened up when it was 60 below F and cold.

Old lumberjacks from the horse-drawn era have told me, with some resentment that contractors back then considered that when mercury froze it was time to pull the horses out of the bush but it was still considered good working weather for men. 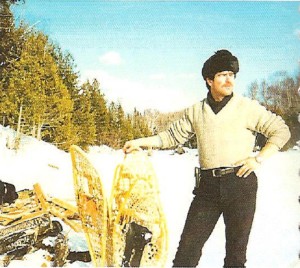 Bruce Lash in the woodsman’s pose.

I know that it gets that cold along the track, since I’ve seen it go down to the second degree. I was fishing with Bruce Lash off Sand Lake, Mile 138. At that time I was still in my purist period, and we were sleeping under the boughs of a big spruce tree on a thick bed of balsam boughs. It was so cold that I took my lead dog, Olive, in under the Hudson’s Bay blankets. I rarely did this because the old girl, if she turned her head in the night, had breath that would wither you.

In the morning we jumped on the bucksaws for a while to warm up. After a good time I went over to Bruce to see how he was doing. We were both still so chilled, so we figured to make a big warm up fire and to boil coffee on the edge of it. We agreed that I was too cold to travel and that we would fish right where we could sit beside the fire.

Being idle, as we were, our thoughts soon drifted towards strong drink. We pulled out a bottle that we had a few shots out of the night before, and there wasn’t a hint of moisture. We thawed ‘er out and started working. The first drink bounced dangerously in our stomachs, but after a while we were able to hoist them straight up, just like wood smoke rises at forty below. Better to risk the blind staggers than moving too far in that cold.

It was during the hard and cold winter of 1969 that I first considered marriage.

Some times in deep winter, short days, and blizzards my southern-born spouse gets grousey. I’ve learned how to restore her equilibrium. I wait until a thaw and stomp into the house all low down and lamenting, earnestly putting forth my point of view. “Ya know Mother, if it soon don’t cool off in this country we’re going to have to pull up stakes and mover further North.”

PIPES AND CANS OR HOW TO MEASURE DISTANCE IN THE BUSH

Back in the days of the fur trade the voyageurs would paddle tirelessly and steadily, forty strokes to the minute, covering about four miles to the hour. Time to time the bourgeois would call “pipe” which signaled a rest for the length of time it would take to smoke a clay pipe of tobacco. They soon began to measure distance this way how many pipes it was from one place to another.

Well times and measurement have changed. My old prospecting buddies used to work it all out in beer cans. For instance, “It’s eight cans going through Spruce Lake and over to the south end of the Quintets.” That was a good day’s travel. If it was dark on the journey’s end, hell, it didn’t matter. We were by that time after all, comfortably illuminated.

TELLING TIME IN THE BUSH

Time in the bush is surely relative. I know what you’re thinking. He’s going to go on a little rant about Métis-Indian time. Let natural rhythms and your mood tell you what and when to do things. Fish when they are biting, hunt at dawn and twilight, work when the weather is right.

Naw, it’s nothin’ like that. You see time is relative to the cook fire. You’re working hard, often damp. You’re hungry all the time. You all the time dream about food and warmth, and pretty soon the passage of time just comes out that way. Instead of naming the hour you say, “It was just after dinner” or “it happened before we played out and made tea.” Or, “It’s hard to recall, but it was sometimes while we were having a strong drink.”

My one time prospecting partner, Silas, once told me I was the worst alarm clock he ever had. At about four thirty a.m. I’d open the door of my shack, the stars just cracking, and bellow over to his in the time-honoured bush wake-up “DAYLIGHTS IN THE SWAMP.” He hated that.

Leonard St. Jean Baptiste carried an old railway watch- a real turnip. When asked the time of day he would pull out the watch and announce the hour with great dignity and then solemnly add, “And so much nearer to eternity.”

You know, with the life I live there’s the odd occasion where modern times and I just seem to collide. I’ve got a new-fangled watch that I hate because dealing with it reduces me to an emotional train wreck.

I drive horse drawn sleigh rides here on the farm, and so I have to carry a watch in order to keep the old bus running on time. Since there are a lot of night rides I have to see what time it is in the dark. So I got a watch that runs on a battery, and you press a little button, and it lights up the time for you which at first I thought was handy.

Skimming the brochure I learned that a watch today can run your life for you that is if you can manage all the adjustments (you have to be an engineer) since the watch face is about as complicated as the dashboard of the space shuttle. If I need the time reset it’s a function that is well beyond me, and even when shown I can’t remember how when the need comes for a new setting. I’ve solved that problem simply by asking a kid on the ride to reset it, since they seem to know all this stuff.

Of course through time the battery died. That’s what made me cranky. Now in my time a man spent a few seconds each day winding his watch to keep it up, but not anymore. To get this one going was a half a day’s work. I had to borrow the car from the missus and drive downtown to the mall. And since I’m a farmer I needed a shower before I went, a change into town clothes as well as a change back into work clothes when I got home.

At the mall I had to wait around while the technician went to work at it. Annie who runs the store is a gal I’ve known for years, and she came over to talk when she saw me pacing restlessly. That was nice and kind of passed the time. She even had the good grace to allow me a little rant on why I was there.

I believe we are over-thinking things these days, and the watch is another good reason why I’m enjoying my personalized regression back to a quieter time here on a horse drawn farm. When the battery goes again I’m going to go back to a stem wind and a kerosene lantern.

SET YOUR OWN PACE

“When the Creator made time for out here he made a lot of it.” ~ Leonard St. Jean Baptiste

Wilderness cultural dogma stresses that a real man never wears his coat around the camp regardless of the weather or season. Our coat is considered a traveling garment, not something a person of strength and pride would don indiscriminately around a place where shelter and warmth are close at hand. A coat is something you take off and hang on a branch when you are logging or wood making during the winter: otherwise it is thought by others that you aren’t working hard enough.

Like any other “ism”, this one bred some melodramatic zealots. I became one of them when I left the bush and lived and worked downtown in the mid to late seventies. Since it seemed that I was only getting in and out of the truck and buildings, I wore only a shirt and sports jacket through that era, suffered bouts of bronchitis, and finally came around to a different way of thinking.

My son, Virgil, was a convert. For the years through grade 6 to grade 9 he littered the backyard with a series of shelters where he wintered. I don’t recall him spending more than a handful of nights in the house. To get him up in the mornings we’d open the balcony door on the second floor and holler at him. A snow bank would shake, Virgil would emerge and come in for breakfast. It’s no mystery that today he’s the Push on an exploration crew and has spent the last five winters in tent camps on the big diamond strike off Great Bear Lake in the North West Territories.

Historically, a most renowned believer was Coatless Curly Munro who was never know to wear a parka, just a vest and shirtsleeves even in the heart of winter. Most knew or suspected though that underneath he wore three pairs of heavy woolen Stanfields. 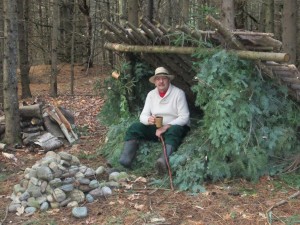 Robert Currier, or as many know him- Farmer Bob, has lived on the land traditionally most of his life. He has built wilderness log cabins, logged, guided and prospected. He was the first recipient of the CBC/Big Brothers “Northern Moose Award” for best personifying the spirit of Northern Ontario.

Farmer Bob lives on his Mockingbird Hill Homestead Farm in beautiful Hiawatha Highlands, which backs onto Odena, Mile 9 on the Algoma Central Line. The farm is a singular burst of colour and beauty and one of Sault Ste. Marie’s premier attractions. It is open to the public year round.

Mockingbird Hill is a horse drawn replica of a Métis homestead in the thirties and forties. In summer the farm features wagon rides, market gardening, a petting barn, a corn maze, and a spectacular wild flower walk.

In winter Mockingbird Hill offers horse drawn sleigh rides and cutter rides on trails that are breathtakingly beautiful by day and romantically lantern-lit by night.

De Big-Shot Train by Robert Currier can be purchased at the Art Gallery of Algoma.