Trending
You are at:Home»Environment»SSM| Time To Ban Dogs From John Rowswell Hub Trail?
By Steffanie Petroni on April 8, 2015 Environment

Is it time to ban dogs from the John Rowswell Hub Trail? Strolling along the poopy paths of the trail begs the question- especially at this time of the year. Melting snow is uncovering all of those buried brown treasures left behind by dog owners that chose to look the other way this winter.

But even though the problem of dog excrement on the City of Sault Ste. Marie’s favourite walking trail is messiest during the season of love, it isn’t just a spring time issue.

With a note of frustration in her voice she reinforced that the aberrance of the poop and scoop by-laws are a concern every season – summer, winter, spring and fall.

“It’s an issue period,” said an exasperated Ropeter. “There is a poop and scoop by-law in the City and they unfortunately don’t abide by it. Or if they do abide by it –they bag it and toss it and then we find the poopy bags hanging from the trees. I’ll never understand why people bag it and then throw it off to the side of the trail.”

Well I understand why they do that Christine! Because it’s totally disgusting to carry a bag of crap for a 5 kilometer walk. And I know this because I have the unfortunate pleasure of doing just that and often. And I’m not talking about a cute little lunch bag size bag of poop. My big boy leaves behind droppings the size of Grandma’s Friday night meatloaf. I double bag that sucker in a couple of Pinos grocery bags and march on with the smelly burden bouncing against my knee every second step of the way. Picking up your dog’s business is a moral high ground among dog walkers. And truth be told that’s the only reason why I pick up that steaming pile of poop – just so I can say that I do.

The City of Sault Ste. Marie’s by-law no. 87-125, regarding the regulation of dogs states that “every person who owns or harbours a dog shall forthwith clean up and dispose of any excrement left by the dog on any property, public or private, in the City of Sault Ste. Marie” and that those provisions “do not apply to any person whose sight is impaired in respect of what is commonly known as a seeing-eye dog owned or harboured by him.” Dog owners that don’t abide by these provisions could be found guilty of an offence and fined up to as much as $1, 000.

Sounds reasonable to me! But we all know that problem is enforcement of the by-law.

As Ropeter adds of the Conservations Authority’s ability to do anything about it, “We don’t have enough staff to be waiting for people that don’t clean up after their dogs. We have signage and garbage pails and baggies. Other than that I’m not really sure what more we can do.” 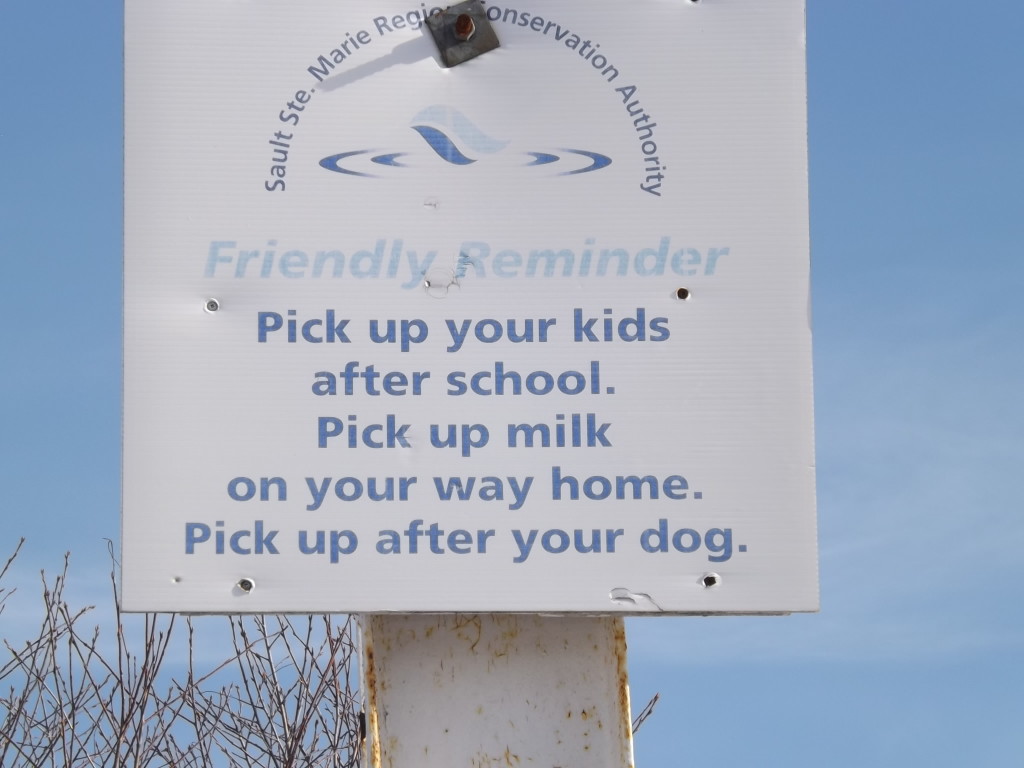 Conservation Authority Signage at the Fort Creek entrance to the Hub Trail. 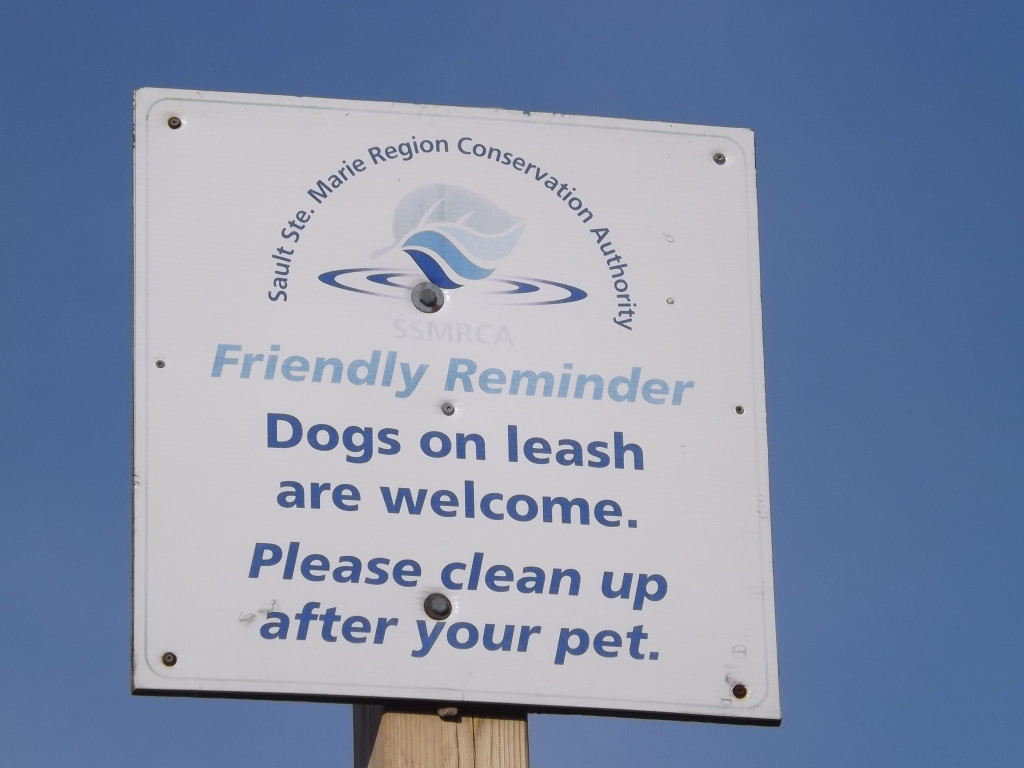 In speaking with Melanie Borowicz-Sibenik, Assistant City Solicitor, enforcing by-laws along the trails has a greater likelihood of actually happening when there are trail users to spot the offence in action but the challenge is one of identification.

“Witnesses are going to be civilians that might observe someone not removing dog excrement. To bring a charge against someone you need a date, time and location- that part is easy. But you also have to identify the person,” explained Borowicz-Sibenik.  “And a person has no obligation to self-identify to a civilian or a security guard. The best opportunity would be if a police officer happens to be walking by when it happens. But with a trail that’s 25 km long that’s another challenge all together”.

Of enforcement of bylaw 87-125 along community trails Borowicz-Sibenik added, “The City has created walking trails for dog walkers to enjoy as well as everyone else. Hopefully the presence of other people on the hub the trail will deter people from not cleaning up after their dogs. It is a great environment and we hope that people want to keep it nice and keep it clean. That’s basically the approach that has been taken.”

Over the past decade the City has invested approximately $10 million into the development and expansion of the trail. A few weeks ago the City chipped in $28, 325 to support a project that will animate the John Rowswell Hub Trail complete with QR codes, virtual maps, trail guides and multi-lingual features. Not unlike a parent, the City has spent all this money buying us a nice hub trail but us kids aren’t taking care of it or appreciating it. In fact we’re literally crapping all over it- or rather allowing our best friend to. 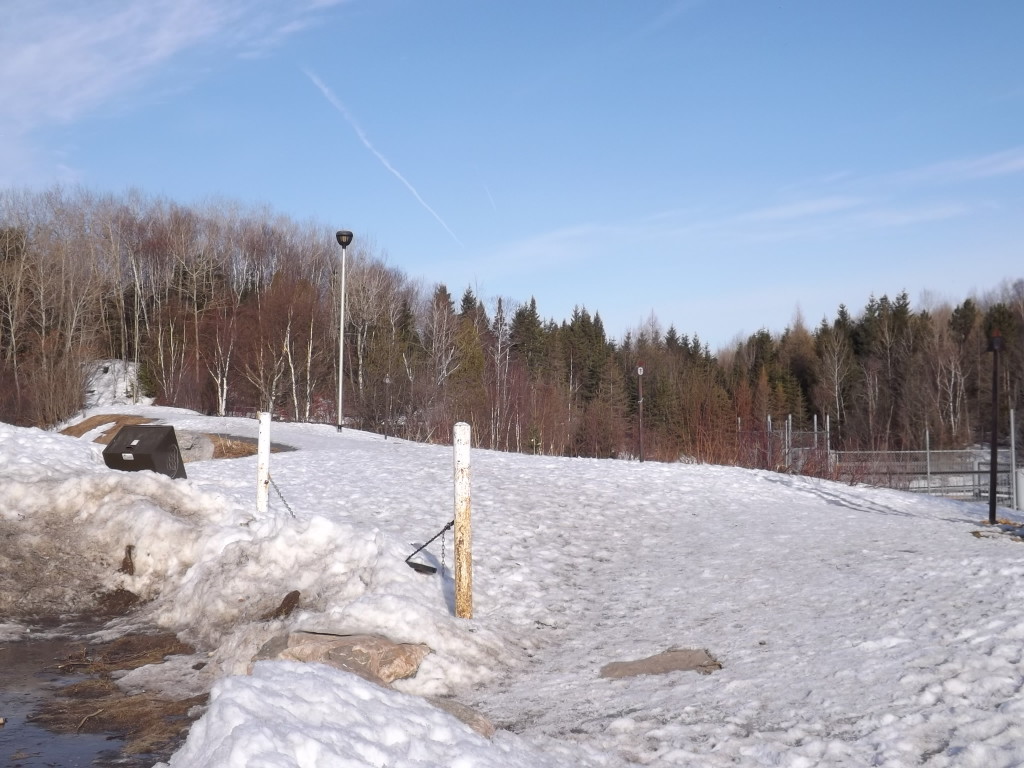 I no longer walk my dogs on the Hub Trail. The last time we walked along the trail the experience was stressful and anxiety ridden as I tried to maneuver my loveable, clumsy dog through an impossible obstacle of dog turds. I can’t imagine that the experience is any better for non-dog owners and definitely not for families out for a stroll with their kids.

So if dog owners aren’t going to, in good faith, pick up after their pooches what are some possible solutions?

Should the City hire unassuming youth, their heads stuffed with ear buds, to patrol the hub trail and discreetly capture time lapse video on their fancy phones of offending dog owners? Should the City invest in strategically placed camouflaged cameras along the trail? Or better yet should we recruit a gang of ghillie suited volunteers to lurk and crouch beside the trail to pounce on terrified and unsuspecting negligent dog owners? Should we spend money and time on awareness campaigns that tend to always make campaign planners happy but do little to avert the problem? Should we spend more money on even more signage and free poop baggies and bear proof garbage cans?

Or should we follow the example of what most cities and towns that have experienced the same issues of dog poop on community trails decided to do- should we simply ban dogs from the Hub Trail altogether? 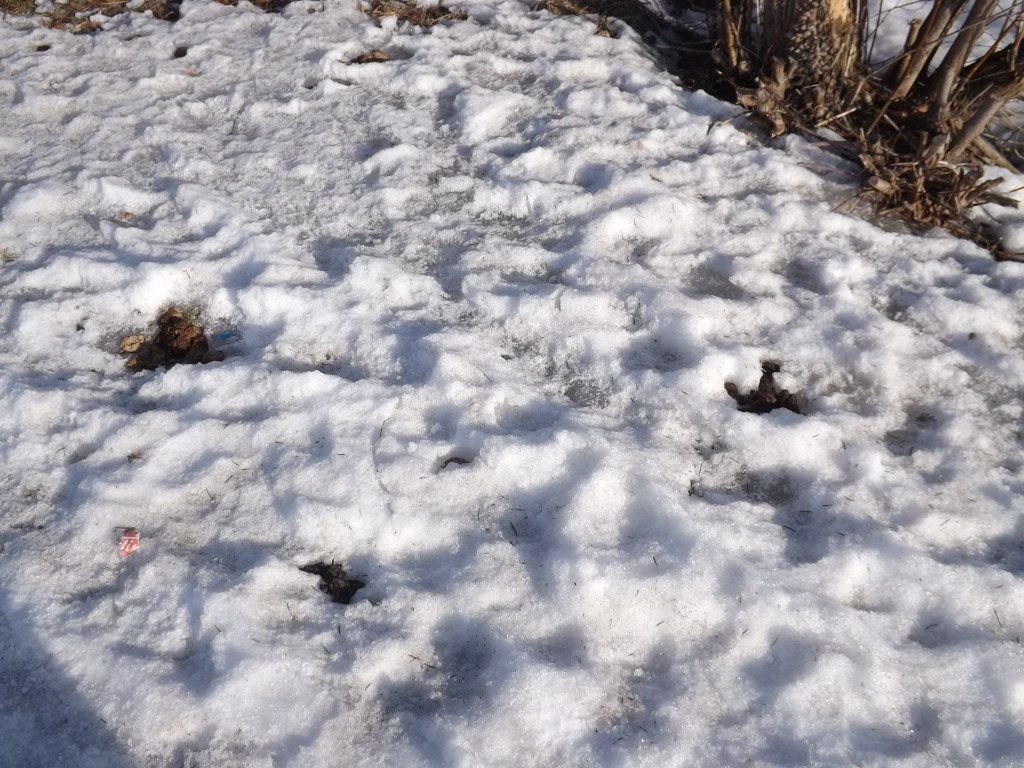 April 7th, Fort Creek- as the snow melts winter gives up it’s terrible secrets. (I’ve spared the reader from the most hideous images) 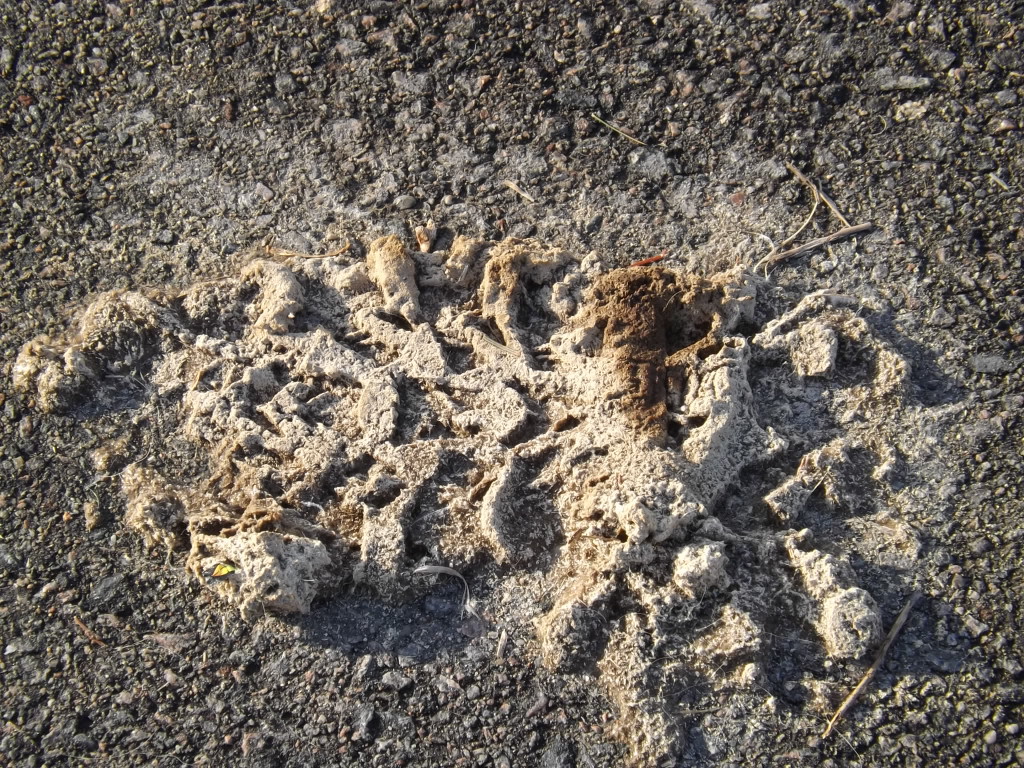 An unlucky step- there’s nowhere safe to walk. Especially for those with the least nimble footwork. 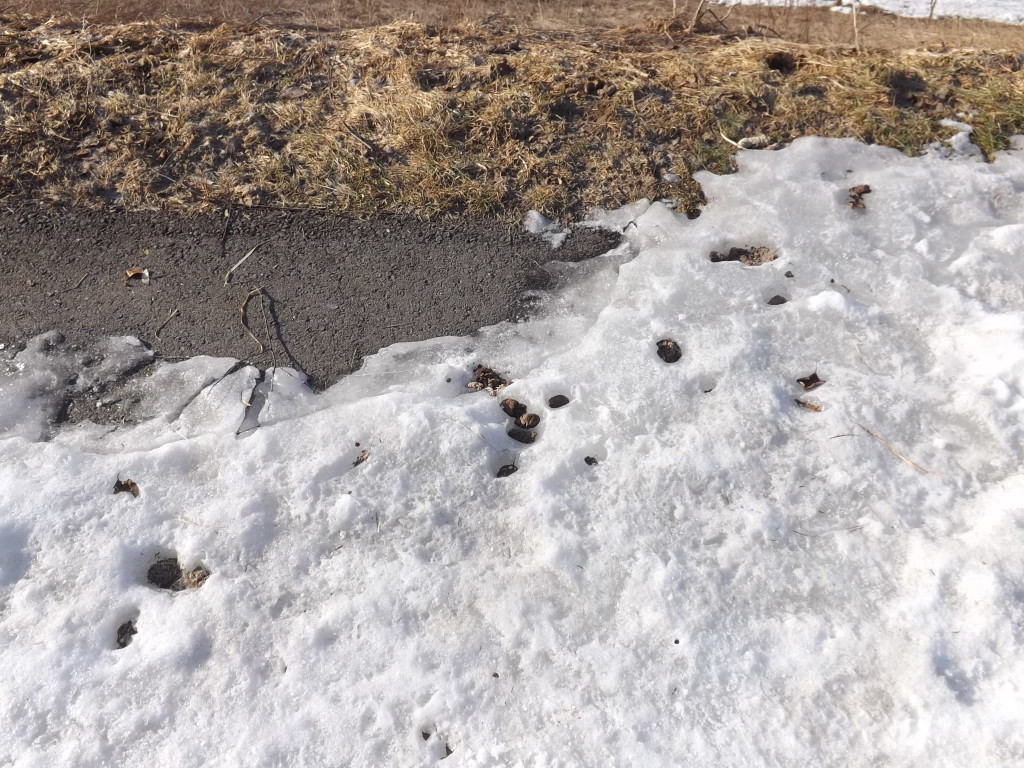