The John Rowswell Hub Trail project led by NORDIK Research Institute has generated upwards of $300,000 in wages and created 10.5 full time positions over the past year and a half. The project brings the Hub Trail into the digital age, enhancing the walking and cycling experience for users of the trail.

The project developers designed an improved user experience utilizing pre-existing hub infrastructure by creating virtual maps, as well as trail guides, to coincide with each trail marker found every half kilometer along the 25 kilometer trail. The trail guide can be experienced in English, French and Anishinaabemowin.

“QR codes will be added to the markers,” explained project coordinator, Jude Ortiz. “Users will have two options. Using a mobile phone people can scan the QR code that will take them to a Web Portal and people with smart phones will automatically know where they are using their built in GIS feature- and then this will take them to the Web Portal.”

Over the course of the project, partnerships increased from sixteen to over forty organizations that shared in the development of the initiative. Support from these entities came in the form of financial contributions as well as the sharing of knowledge about the culture, ecology and history of the region. 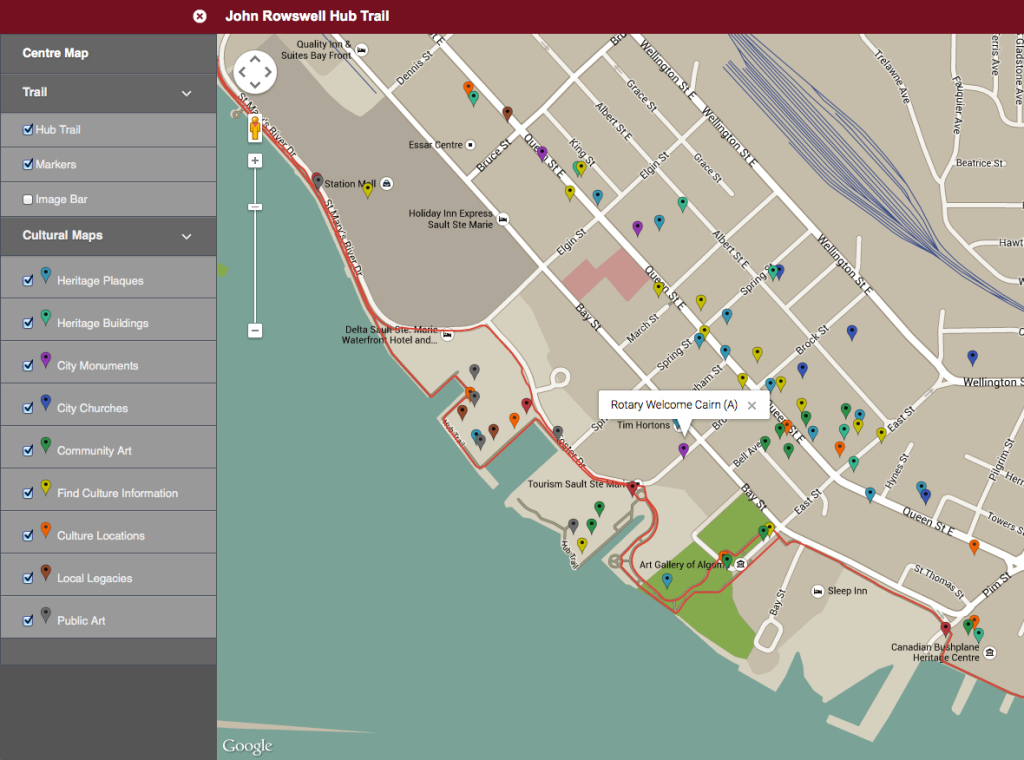 A screen shot of one of the interactive maps created for the John Roswell Hub Trail animation.

Of particular significance was the partnership among local School Boards. Information presented in the trail guide and web portal was developed keeping in mind educational the educational curriculum taught at both the elementary and high school levels, making the Hub Trail ideal for expanded field trips for teachers and homeschoolers.

It is anticipated that the improved Hub Trail will inspire spin-off opportunities in tourism. In addition to clarifying the flora and fauna around the trail of particular interest are the thousands of chimney swifts that gather en masse at the Sault Ste. Marie Courthouse and Post Office on Queen St. and according to Dr. Gayle Broad, supervisor of the project, one of two places in Ontario where such an extraordinary sight can be witnessed.

“Bird watching is one of the fastest growing tourism specialized sectors,” commented Dr. Broad. “In the summertime you can see thousands of chimney swifts flying down into the chimneys of the Courthouse and the Post Office.”

Adding to that Dr. Broad spoke briefly about the how the improved Hub Trail is an opportunity to promote the cycling trail between the Sault and Sudbury and its’ connection to the larger Trans Canada cycling route.

In a report entitled, Lake Huron North Chanel Cycling Route Study, was released in March of 2013 and indicated that “it has been shown that there is a growing demand for cycling and eco-toursim throughout Southern Ontario and North America. Studies indicate that economic benefits of tourism related to active transportation infrastructure will continue to grow. The demand stems from an increasing desire to explore new areas through an active mode of transportation and experience one’s natural surroundings.” The report goes on to say that the largest beneficiaries of cycling tourism are retail, food and beverage services and lodging services.

This week the City of Sault Ste. Marie agreed to chip in $28, 325 to offset expenses associated with GIS development.

“The GIS mapping is a key component  and a component which we didn’t anticipate to as intensive as it has become,” explained Dr. Broad.

Additional funding for the Hub Trail animation was received from the Ontario Trillium Foundation in the amount of $92,700 and $70, 875 from the Northern Ontario Heritage Fund Corporation.

Project coordinators are preparing to launch the new Hub Trail features in April 2015.

And just in case you were as fascinated to learn about the chimney swift phenomenon as I was, here is an amazing video of a whole bunch of these sooty little birds purported to be dive bombing the Sault Ste. Marie Courthouse chimney.