Bullying is characterized as a form of aggression in which there is an imbalance of power between the bully and victim. The bully is always more powerful than the victim. Bullying can be physical, verbal and/or psychological. It can be direct (face-to-face) or indirect (behind someone’s back). Indirect bullying includes exclusion and gossip. And of course there’s the more advanced 21st century type of bullying- cyberbullying. The key elements of bullying are: power imbalance; bully’s intent to harm; victim’s distress; and repeated over time.

Despite endless campaigns and school seminars to end bullying the problem isn’t going away. And the problem isn’t as ‘youthy’ as glossy terms like ‘bullying’ make it sound. Nobody is talking about throwing sand in the sandbox or not sharing their favourite coloured crayon from their protected hoard of purple Crayola’s. The act of bullying often leads to more ominous conclusions for the abused student such as broken bones, flesh wounds, mental health issues and God forbid, suicide. 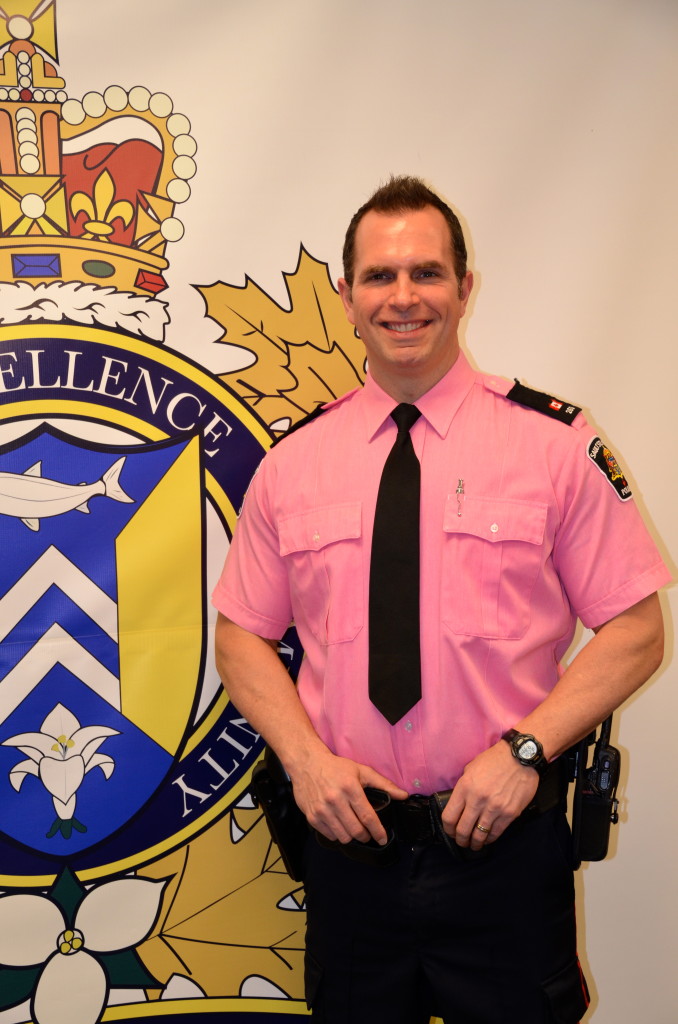 Sault Ste. Marie, Constable Rodney Burrows. “When I was a kid if there was an issue at school I could separate myself from it. I could go home, turn on some music and decompress. Today kids have access to the internet, they have electronic devices at their disposal and they never get a break if they’re bullied. It’s very, very difficult on them.”

For the past two years Constable Rodney Burrow has worked as a liaison officer to Sault Ste. Marie’s elementary schools. “As far as bullying by its true definition we don’t see a whole lot of it. What we do see is a lot of conflict issues that if not addressed and resolved have the potential to turn into a bullying type situation. However, the majority of bullying that we see is via internet.”

The Royal Canadian Mounted Police website describes cyberbullying as involving “the use of communication technologies such as the Internet, social networking sites, websites, email, text messaging and instant messaging to repeatedly intimidate or harass others.”

National statistics indicate that violence among youth is on the rise. By Constable Burrows’ observations this trend is not represented among Sault Ste. Marie youth either in the schools or in the community.

Elaborating Burrows’ explained, “What we see happening is that kids that would have always had physical conflict with other kids still have physical conflict with other kids. And kids who would have had verbal conflict with each other still have verbal conflicts. But now we see another entirely different group of kids who would otherwise not have been bullies but now they have access to the internet and a medium to engage in some type of harmful behavior -it’s easy to do. They’re detached from the actual person, they sometimes feel anonymous and they feel safe in the comforts of their own home when they are committing these actions on the internet.”

A quick fact sheet published by the Canadian Red Cross indicates in regards to cyberbullying:

Cyberbullying affects victims in different ways than traditional bullying. It can follow a victim everywhere 24 hours a day, 7 days a week, from school, to the mall and all the way into the comfort of their home – usually safe from traditional forms of bullying.

Back in the ‘olden days’ – the age before digital-everything, children who had a lousy day at school could find some refugee in the home. Not today. And as Constable Burrows ruminates restricting children’s access to social media and the internet is one of the greatest challenges faced by teachers and parents today.

“If a child is bullied at school chances are that the bullying is following them into their home. They turn on their electronic devices, the bullying continues and the impact will increase exponentially. Until there is some type of intervention, that child will not unplug themselves. So an event that was face to face may have had a small impact but the impact can have a huge impact once it’s put through social media.”

Bill 13, often referred to as the Accepting Schools Act, came into force on September 1st, 2012. The purpose of the legislation is to obligate the Ministry of Education, boards, principals and members of the Elementary Teachers Federation of Ontario to: identify bullying; prevent bullying; and to improve inclusiveness in schools. Safe and inclusive schools are critical to a student’s success and well-being at school.

However, national statistics indicate the problem of bullying isn’t going away any time soon. Bullying rates in Canada are higher than 2/3’s of OECD countries and half of students report that bullying is a problem in their school. On a global scale World Health Organization study of 40 developing countries showed that exposure to bullying ranged from 8.6–45.2% in boys and from 4.8–35.8% in girls.

City Police programs delivered by Constable Burrows are designed to work with the elementary curricula which promotes a hands-off and respectful environment. “They are taught all of those expectations at a young age. We especially target kids that are between 10- 12 yrs. old. When they reach 12 yrs. they’ve also reached the age of criminal responsibility. They are taught about internet safety, common laws, bullying and repercussions.”

Bullying behavior can lead to criminal outcomes and fall under six categories:

Threats: whether done face to face, online, over the phone or through text messaging.

Sexual Exploitation: sharing videos or photos with nudity of people under 18.

Setting out to change school cultures and trying to catch up to a technological era that exploded before anyone could understand the implication upon harassing behaviours, let alone develop mitigation features, takes time.

A report released by Public Safety Canada lists a plethora of best practices and program models designed to prevent and reduce bullying. Practices range from early intervention strategies to multiple community partner collaborations to increased supervision to individualized guidance for bullies and victims.

On account of his own observations Constable Burrows is confident in delivering an uncomfortable but, and by statistical evidence, realistic statement about bullying among youth. “We’ll always have bullies. I don’t think we can get away from that. There’s myriad reasons put forward by people more educated than me as to why bullies do what they do.”

And careful to explain that the onus is always on the perpetrator not the victim Constable Burrows added, “I think where we have the power to change, and where we have quite a way to go yet, is to educate people on how not to be victims- not becoming and not remaining victims.”