Trending
You are at:Home»Agriculture»Quattro Farms Coming to a Vendor Near You
By Steffanie Petroni on July 7, 2017 Agriculture

It isn’t a trendy behaviour that has many of us purchasing local farm-fresh goods but rather a return to old ways. Fast-food which may have begun as a trend evolved into a way of life that, aside from a proliferation of minimum wage jobs, hasn’t served us well.

Locally the farmer’s market saw a revitalization just over 10 years ago due in large part to the start up of community supported agricultural initiatives. At that time it was mostly produce, perhaps some honey and preserves that could be acquired from the Sault’s one farmer’s market. Eventually the Algoma Farmers Market expanded, more farmers came in and different products –like meat, were introduced at the markets, and of course a second market –the Mill Market, was established. To the delight of folks who can’t make it to the stalls on Saturday or Wednesday, local grocers and butcher shops increasingly carry local products, and restaurateurs who support local farmers let us know about it. And if restaurateurs weren’t buying local before, they have begun to. 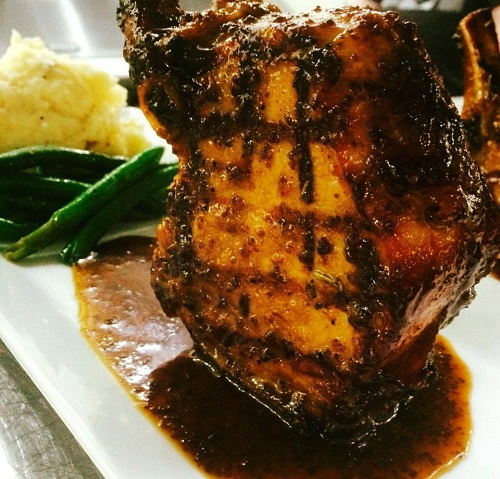 Quattro Vinotecca, a restaurant in Sault Ste. Marie, served as much local product on their plates as supply allowed. But in 2016, the restaurant made a daring decision to operate its own farm- a first for any restaurant in Ontario.

Inspired in large part by the restaurants executive chef, Paul Chiappetta, the owners of the restaurant/hotel, struck a 10 year contract with farmer, Mark Petingalo. Petingalo is raising 5,000 chickens, 500 plus pigs and as many as 800 rabbits – all GMO and antibiotic free. The humane treatment of Quattro’s animals is utmost –these critters live a good life.

Providing enough space for the animals to roam, and to root on natural surroundings isn’t just a nice thing to do, it ensures a cleaner environment and decreases the risk to infection or disease among the livestock. Livestock have the run of the sprawling 168 acre farm complete with apple orchards, mature evergreens and a fresh running creek.

When animal production underwent a big change in the 1950’s, becoming more about industry than farming, animal units became concentrated- packed, and producers began supplementing feed with antibiotics. It may shock people to know that 40% of the world’s supply of antibiotics finds its way into animal feed every year. The practice was adapted to prevent disease, and touted as an improved method for encouraging the growth -or fattening up, the animal. Studies show that pigs that received antibiotics required 10 to 15% less feed to achieve the same size as pigs not receiving antibiotics. Cheaper to raise on antibiotic supplemented feed, and a bigger pig means bigger bucks, i.e. increased sales of cheap meat.

But with information about the impact of antibiotics on human health more accessible to consumers, people are choosing to eat less meat that has been produced without antibiotics, for the same price. As far back as the 1970’s, researchers began warning about routine use of antibiotics in feed saying that doing so contributed to the surge of drug resistant germs and deadly infections impervious to antibiotics.

“The information is out there now and people can’t really ignore it,” remarked Lesnick. “People are more aware of the methods that are being used to produce their food.”

Beginning this summer, you don’t have to dine out to appreciate the fine products raised on Quattro Farm –Quattro is going to the Johnsons Farmers’ Market in Desbarats every Wednesday and Saturday. Can’t make it to the market? Don’t worry because efforts are underway to get Quattro products- like porketta, into area grocery stores as well as to other restaurants. (You’ll be able to buy porketta at the market too!)

“We’re pretty excited about these new initiatives,” remarked Lesnick. “Quattro Farm products don’t need to be exclusive to us- it could be anywhere. We are in the process of talking to outfitters, fishing lodges and we’re working with Tourism Sault Ste. Marie to help us identify opportunities where we could approach businesses to offer Quattro Farm products on their menu. We’ll be approaching any of the independent grocery stores from here to Sudbury as well.”

In addition to pork and poultry products, Quattro Farm will also be selling their rabbit at the market. Not sure how to cook rabbit? That’s ok, you’re not alone. Cooking suggestions and recipes will be provided to help you prepare this lean meat in your kitchen.

Quattro Farms and Quattro Restaurant will be running a draw all summer. Make a purchase from either the restaurant or market to be entered into a draw for $200. And for more information about the farm or the restaurant click here.