Trending
You are at:Home»Agriculture»Farming with a Conscience: New Tricks for Old Cows
By Steffanie Petroni on May 30, 2017 Agriculture

Incorporated in 2001 as a not for profit entity and registered as a charity in 2006, the Kensington Conservancy is a land trust protecting ecologically sensitive lands along the St. Joseph channel. Today, through a combination of property donations, and fundraising for the purchase of property, the Conservancy protects 894 acres of land inclusive of provincially significant wetlands.

In 2012, land owners occupying property and homes in Desbarats in an area known as Port Lock, approached the Conservancy to articulate concerns regarding large plumes of discoloured water flowing from Stobie Creek into the Port located on Lake Huron. Stobie Creek flows through three privately owned agricultural properties and a provincially significant wetland. 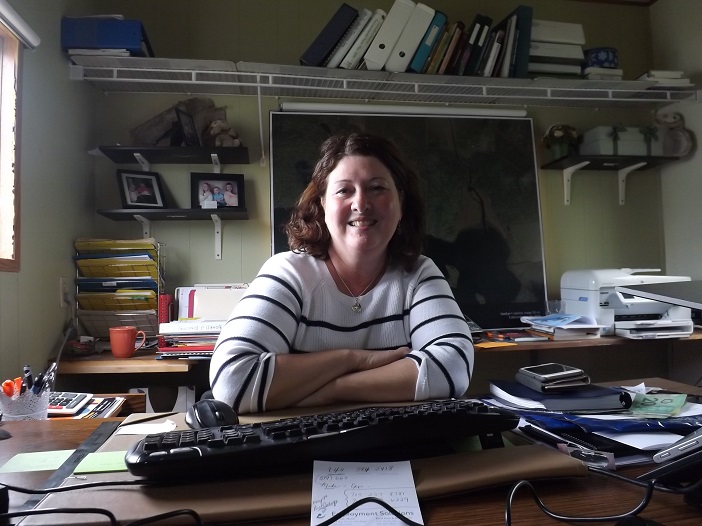 Tanna Elliott, Executive Director of the Conservancy, began speaking with farmers upstream of the Port, who identified concerns with bank erosion along the creek.

“Soil erosion was causing a lot of plumes in the creek, and there were cattle in the creek which was an issue as well,” remarked Elliot.

Through an Ontario Trillium Foundation grant the Conservancy retained Tulloch Environmental to conduct an assessment and prepare a rehabilitation and enhancement strategy for a 2.4 kilometer section of Stobie Creek.

Phillipa Cryderman, Engineer-in-training and a researcher with the Stobie Creek Rehabilitation and Enhancement project, explained that a few factors contributed to the erosion of the banks. “Land use is part of it. When you have agricultural land, farmers like to utilize all of their land,” explained Cryderman.  The natural consequence is the loss of natural vegetation.

The impact of cattle traffic also had an impact upon certain sections of the bank. “When you already have a compromised area that doesn’t have natural vegetation or roots stabilizing the banks, cattle directly accessing the creek bank would further compromise the stability of the bank,” elaborated Cryderman.

A third factor identified was the annual activity of busy beavers upstream at the outlet of Gibboney Lake. “There is a beaver dam there that gets re-established and then blown out every year. And so that large release of water in terms of the energy it releases, cuts the channel further downstream. That was a source that also led to the erosion of the banks. As well, that area of the lake would act as a settling area and with the release of that dam there’s a high potential for those sediments that settled out to move into the creek.” 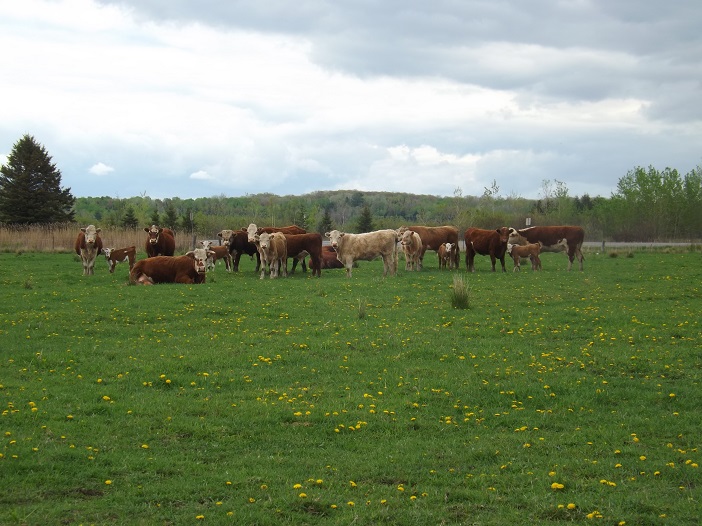 Charles Stobie, a cattle farmer, owns one of the three agricultural properties located along the area of concern. Stobie, is a fifth generation farmer on his family homestead established in 1870. His property is the first farm located above Port Lock. He noted the effect beaver dams were having on along the banks.

“Someone would pull the dam down and it was like flushing the toilet. Black water comes rushing down the creek,” commented Stobie of the problem. Stobie was eager to work with the Conservancy to address the concern of soil erosion that was muddying up the creek, creating the discoloured plumes, as well as jeopardizing his livestock. The issue of cattle accessing the creek becomes dire when water levels are low and sinkholes are created, placing livestock and livelihood in peril.

“When the water was low the cows were going down and walking along the riverbed. You could see the soil. I had a couple of animals get stuck and I had to pull them out of the river-which was bad,” recalled Stobie.

Tulloch Environmental’s report outlines various strategies to rehabilitate 26 sections along the 2.4 km area of concern with emphasis on action that will minimize sediment from entering the creek, stabilizing the banks, and controlling the loss of land surrounding the creek due to erosion. The estimated cost to achieve these goals is a whopping 3.2 million dollars. With just $20,000 remaining from the original OTF grant of $140,000, the Conservancy was able to work with Stobie to mitigate the natural as well as agricultural impact upon the creek and riparian edge. 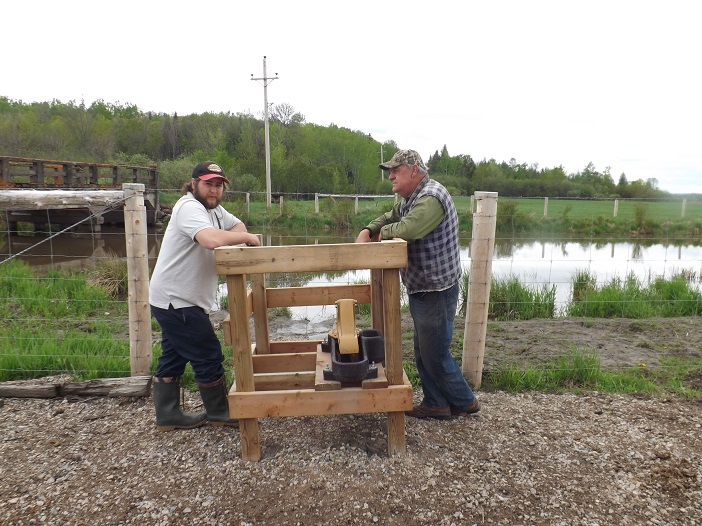 Carter Dorscht, (left), and Charles Stobie check out a recently installed nose pump in front of a recently erected fence along Stobie Creek. 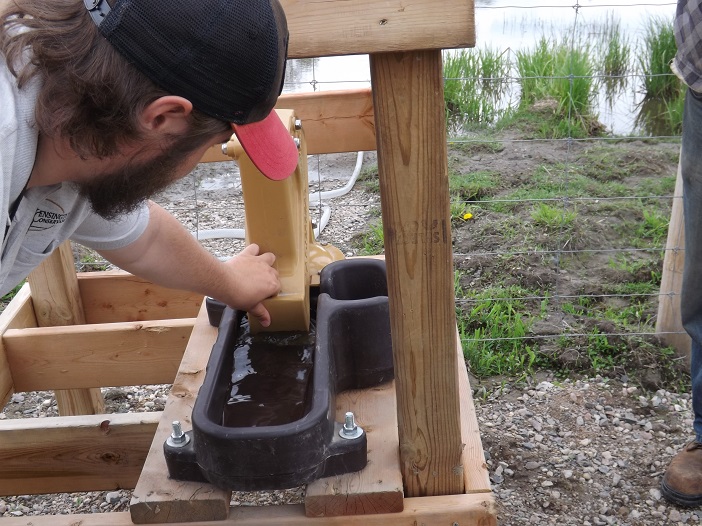 Carter Dorscht is the Land Stewardship Manager with the Conservancy and has been collaborating with Stobie over the course of this ongoing project. “The first thing we wanted to do was get the cattle out of the creek, so we got a fence up. The stretch of Stobie’s Farm is 425 meters so we put up a total of 850 meters of fencing on either side of the creek.  And then we put in nose pumps for the cows. A hose runs into the creek and the cows push the pump with their nose.”

The pump accommodates two feeding stations, a useful feature for calves that may not be strong enough to pump their own water. But how do you teach an old cow new tricks?

According to Dorscht’s research, one alpha cow will lead the way. “Then the other cows will copy,” he said. Two more nose pumps will be set up on the opposite side of the creek next year when Stobie moves the cattle into the field on the west side of the creek.

Thanks to a donation to the Conservancy, the second phase of the rehabilitation project can be completed on Stobie’s property. The creek banks will be replanted with natural vegetation to restore the stability of the creek edge. 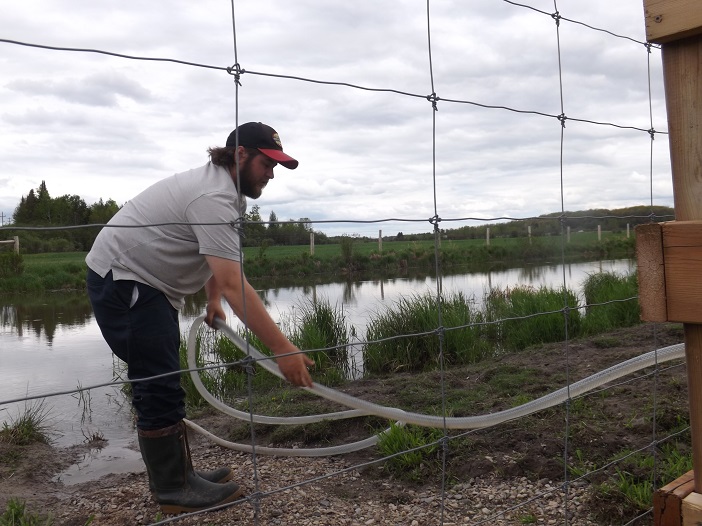 Carter running the nose pump hose into Stobie Creek. The eroded banks will be planted with trees and other natural vegetation to restore stability to the riparian edge.

“When you don’t have that riparian vegetation, like the alders and the willows with a deeper root base within the stream bank, it is not as sufficient to anchoring the soil along those banks,” commented Cryderman. “We will make great strides by re-establishing the natural buffer strip adjacent to the creek on either side and let nature take its course in stabilizing those areas. Not only does that allow stabilization of the banks with the root system, but it also provides a little bit of a filter strip for the run-off that comes from adjacent lands. So when you have adjacent fields that may have cattle in it, any water naturally flowing across the field, before it enters the creek there will be an additional vegetation strip to go through that would slow down water and could help filter out sediments from entering the creek.”

Having spent his entire life next to the creek, Charles Stobie is pleased with the project outcomes to date. “To keep my cattle out of this chunk of the creek is a good idea, but what about all the cattle up north?” he remarked tossing his arm upstream.

In his younger days Stobie would fish from the one hundred year old bridge connecting his property on either side of the creek. “I caught a lot of fish off that bridge, use to catch catfish in there,” he recalled. These days he’s not fishing out of the creek so much but he has observed that the water levels are rising again and fishing is better. “But when the water was low it didn’t look good. It wasn’t moving at all.”

As Stobie provides a walking tour of his property, and along the creek named for his family, it isn’t difficult to note the pride in his voice when he speaks of his multi-generational home. “My great-grandfather and grandfather pioneered here and all around this area in 1870. He had sisters and brothers here too. My Grandpa built this house in the 1900’s but they built the barn first. They stayed in a little log cabin until then.”

All the men in his family were farmers. “Or they tried to be,” chuckled Stobie.

When asked why he wanted to be involved with the rehabilitation project he simply stated, “Well it’s a good thing.”

Though completing the entire rehabilitation project is millions of dollars away, Elliott reassured that the Conservancy was committed to the ongoing initiative, and welcoming donations and seeking new grants.

“We’re working with the Ministry of Natural Resources and looking at ways that we can do the work. We’ve had private donors that have contributed to the project so that’s what’s allowing us to be able to continue to do the work on the vegetation as well,” remarked Elliott. “One of the things we really try to do is get the message out there about good stewardship practices and land use planning.”

To make a donation to the Kensington Conservancy click here.