Editor’s Note: The Northern Hoot is following Fannie McFadden of McFadden Acres all season along! Our stories about Fannie and her organic farm will evolve just as the growing and harvesting season does.  And so, ladies and gentlemen, meet Fannie! 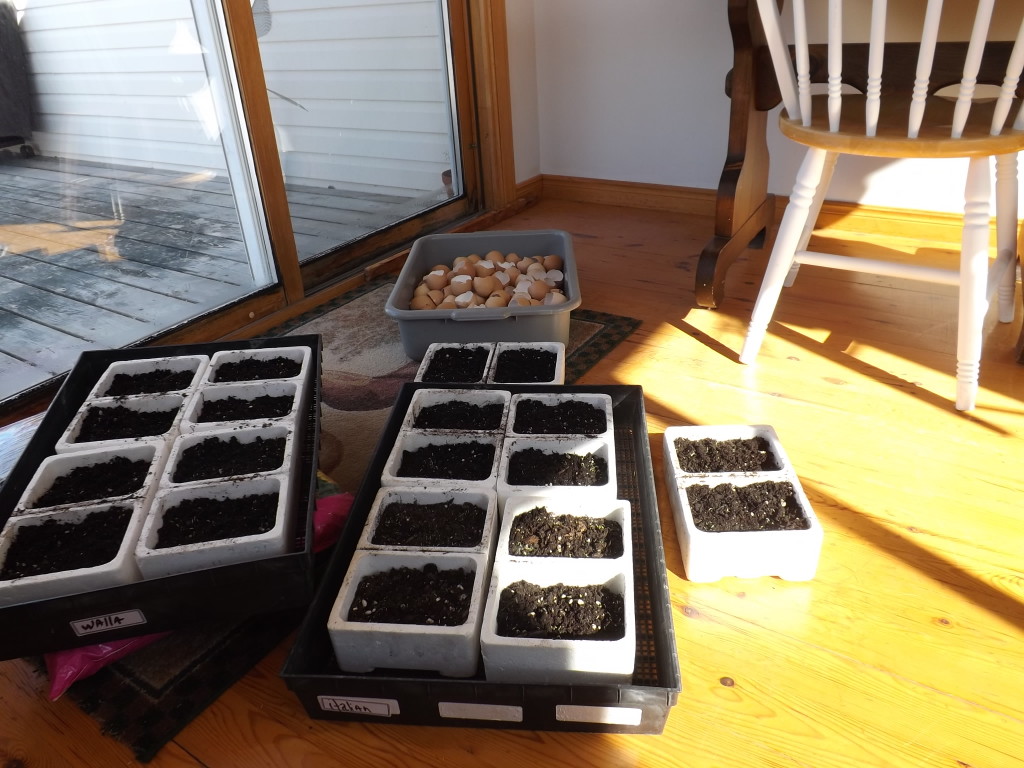 Still too cold in the outdoor greenhouse and running out of room beneath her heat lamps in the basement, Fannie relocates her onion seedlings into the family’s sunroom. In the background, Fannie’s family eats a lot of eggs in one week – 3 dozen organic egg shells saved for compost.

“When I was a kid, I think that deep down I wanted the ‘Laura Ingalls’ life. You know -tying on an apron, taking care of chickens, doing that homesteading thing. But my life did not take me there.”

It is a bright morning in March. The sky is sharp and very blue. Fannie McFadden is standing in her sun room gazing across her snow covered field. At her feet are hundreds of onion seedlings. She’s decked out in a comfy pair of overalls.

“After college and university I had to build up my career. I had to climb the corporate ladder and all that stuff. So I forgot about that dream.”

At the height of a successful marketing career Fannie met Ken, the man she would marry. Beginning their life together, they searched for a new nest to call home. They found it in Desbarats -a small farming community in Northern Ontario, about 55 km east of Sault Ste. Marie. Both Fannie and Ken grew up in the North. 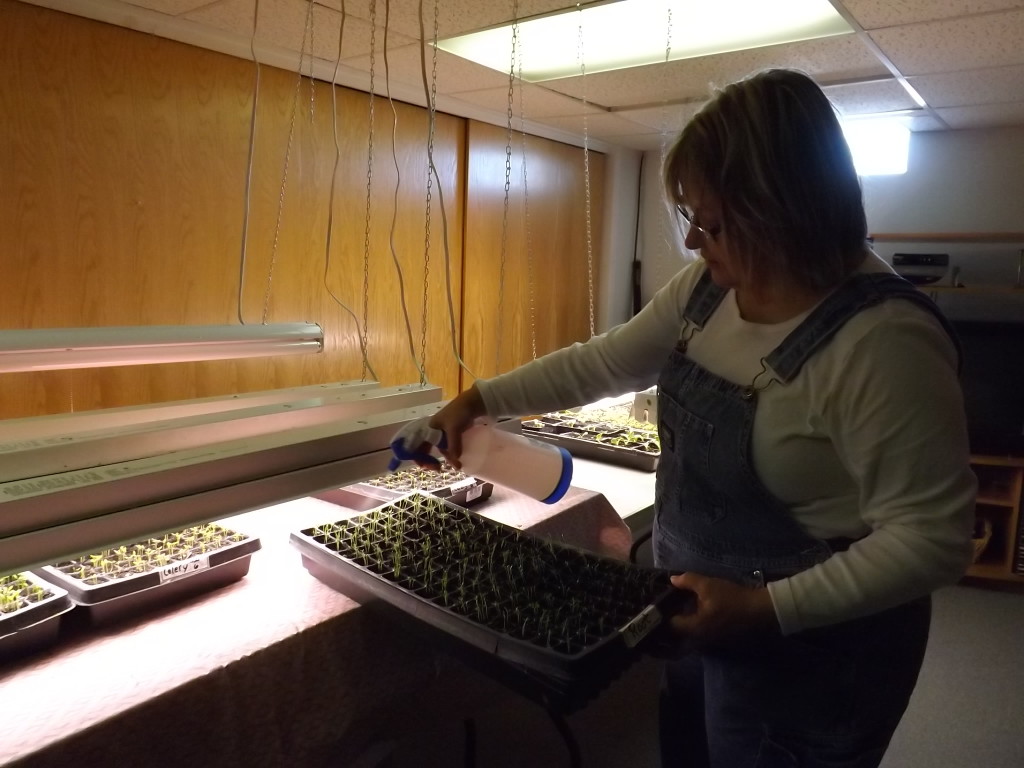 Fannie rigged up about 15 feet of tables and heat lamps in her basement for raising seedlings. “I set it up so I can do my seeding in the winter and watch TV at the same time!”

“My husband is a little bit redneck-typical Saultite. And me too. I grew up in Dubreuilville. We both grew up hunting and fishing. This is what Northerners do on the weekend- fish and hunt and drink beer on the weekend.”

Fannie doesn’t hold back her laughter and her eyes, now focused on me, are definitely twinkling.

“There’s a little bit of redneck in everyone from this area. We don’t dream of getting a Mercedes. We want a truck that we can hook up our trailers to, or to load up our four wheelers and skidoos.”

It was 2006 and their new life was off to a good start. Their new home was move in ready- or as Fannie would put it, “tickety-boo”. So when Fannie was laid-off from a whirlwind career just a few months later she was caught off guard. But being Fannie, she rolled with the punches. Despite the setback, Fannie and Ken went ahead with their late honeymoon plans across eastern Canada- New Brunswick, PEI. Heading there, through Ottawa and Montreal, Fannie picked up the scent of manure in the farmer’s fields.

Forget Molly Maid and a catering business to compensate for the loss of a lucrative career! Smelling all that crap harkened Fannie back to her purest of childhood desires. She looked at Ken who was sitting in the driver’s seat and said, “Hey! I have an idea! How about we become farmers?” 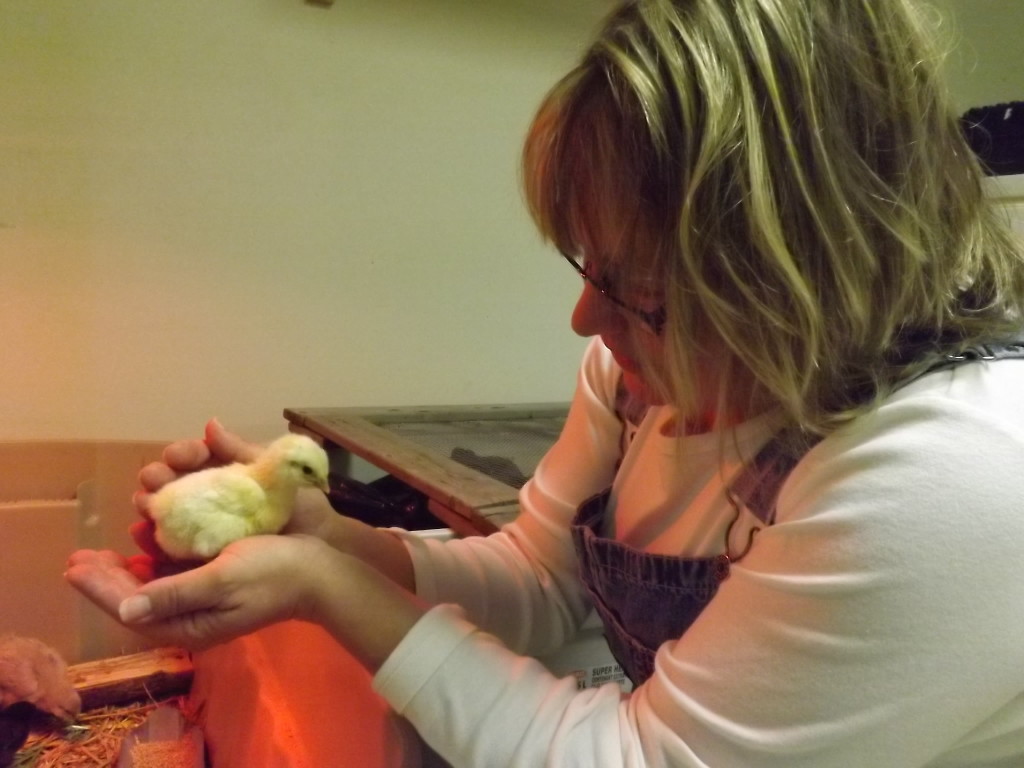 Eeeeee!! Baby chicks that will grow up to become laying hens- Orpington, Barred Rock and Red Sex Links Hens will provide Fannie and her customers with brown, blue and green free range eggs this year! 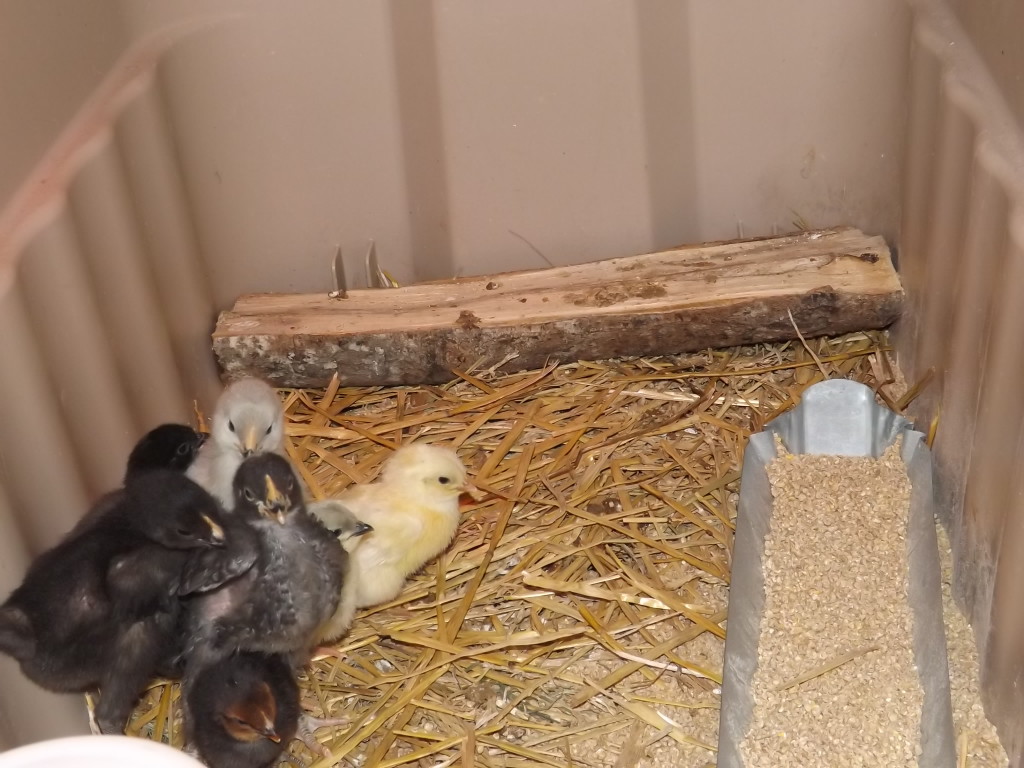 Eating local and supporting local farmers in the Algoma District became on the conscience of the main stream about a decade ago. CSA’s (Community Supported Agricultural networks) began cropping up and Farmer’s Markets began growing in popularity. The demand for local produce and meat has evolved over the years to the point of a shortage in supply. Regional entities such as the Rural Agri-Innovation Network have been working with area growers and purchasers to develop an integrated food strategy that would increase support for growers and increase access and diversity to local food throughout the year.

Fannie has designated 2 acres of her 102 acre property, to organic vegetable farming. Entering her ninth growing season this year, Fannie has come by her success the hard and honest way.

When she and Ken returned home from their honeymoon in the fall of 2006, Fannie spent the winter months consuming as much information about organic farming that she could take in. She spent endless hours researching, reading every article and book written on the topic, and took in every webinar she could- even if she had to peel her supper’s potatoes in front of it.

“I thought, ‘this is going to be easy. I’m a business woman. I can plan this. I’ll just learn how to sow carrots. I mean, how hard can that be?’” Fannie bursts into hearty laughter and her shoulders jog up and down.

“Everybody, including my husband, family and friends thought I had lost the plot. They thought that I was going to ruin my career, that I couldn’t do it- I couldn’t just go and become a farmer just like that. And they were right. But the more you tell me I can’t do something the more determined I become- like a dog with a bone.”

In that first year Fannie set a goal to sell $7500 worth of carrots- just enough revenue to change the coding of her property from residential to farm.

“Weeding and going on your hands and knees like Laura and Almanzo is whole different thing. And my cue cards with all my statistics wasn’t helping so much either! We hit clay, we hit weeds and we were determined that first year to not need a tractor or a rototiller- we’re doing it like they did! By July we said ‘forget that!’ and we ran to our neighbours and said ‘We want the biggest rototiller you got!’” 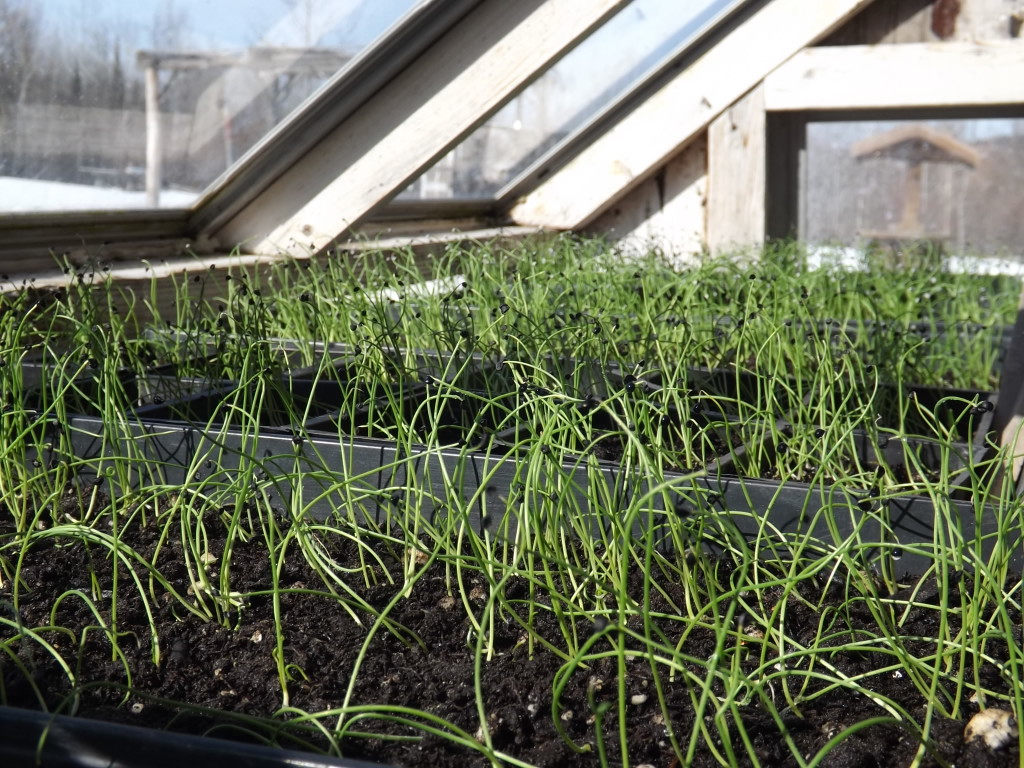 Inside one of Fannie’s greenhouses. Onions galore! By the end of the growing season Fannie will have harvested 7,000 onions. 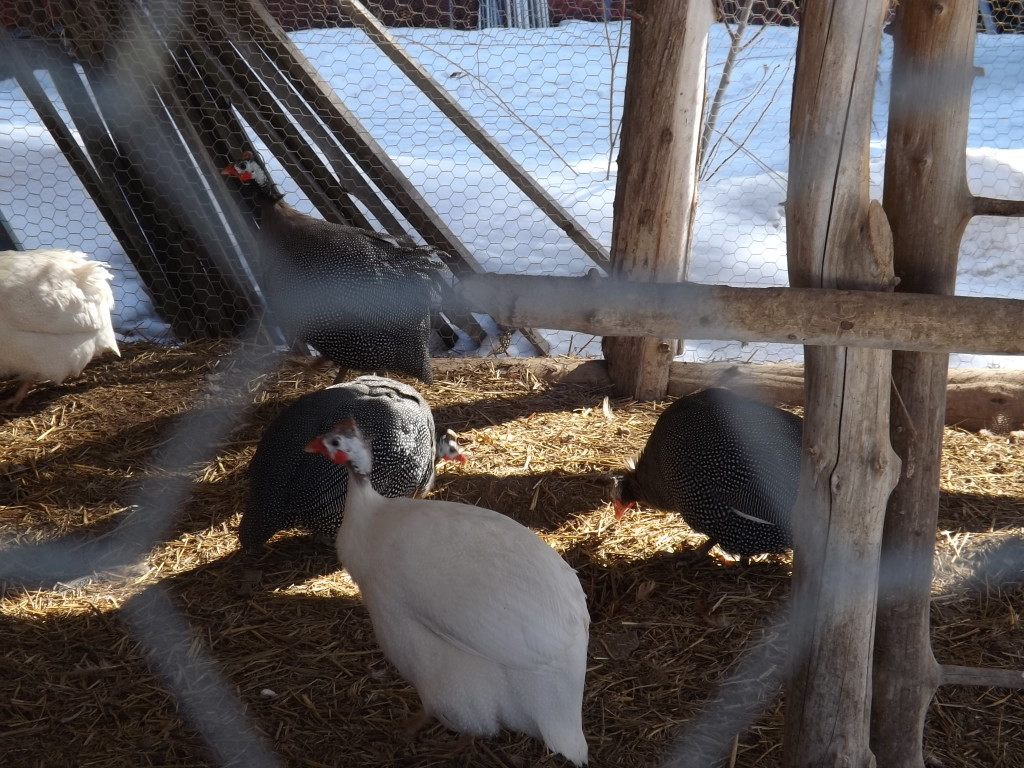 Fannie’s Chicken Coop. Among her array of laying hens her Guinea hens are pictured here. “They only lay two or three months of the year. The eggs are much smaller but the yolks are huge and the shells are so hard that you have to almost whack them open with a hammer.” Below, Fannie holds a small Guinea egg. 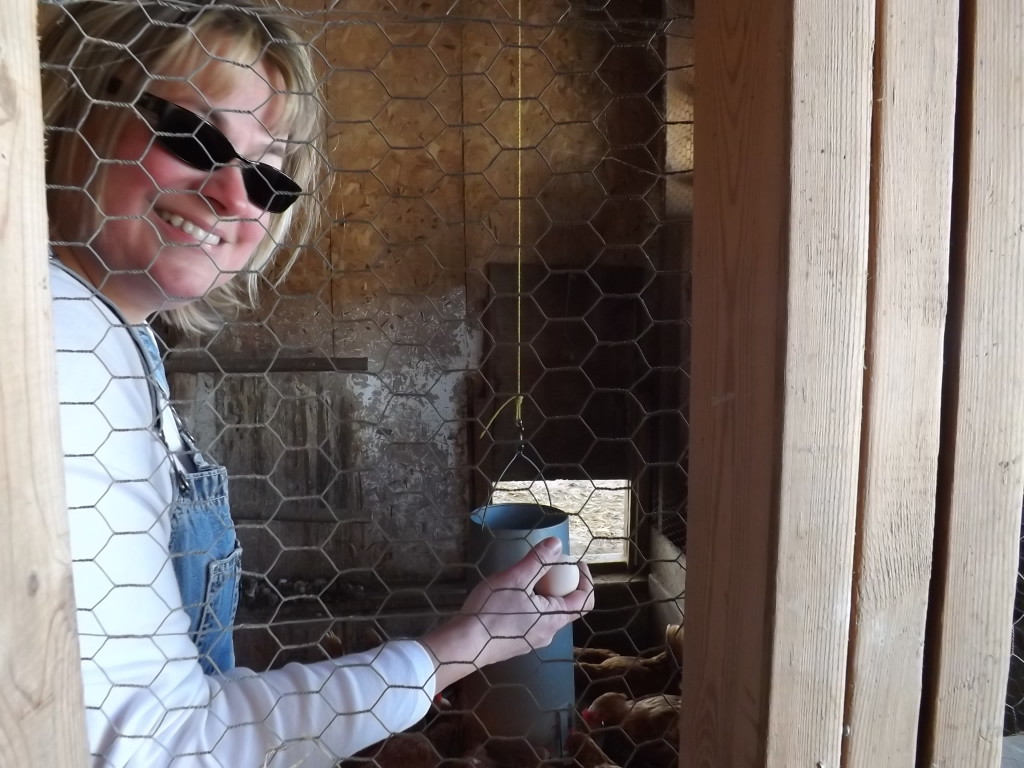 Fannie is roaring with laughter again at the memory. She goes with it until the giggles trail off and says, “Oh it was hilarious. But that first year was hard and we worked even harder. At the end of the day, every day, for that first season I was so exhausted that I couldn’t even eat my soup at suppertime. I would just pass out.”

Fannie didn’t meet her quota to recode her property that year but her spirit wasn’t quenched. She came back the following year with a new plan- the McFadden’s Acres Certified Organic V.I.P club (short for Vegetables in Production). The plan was to pre-sell her crop before planting and harvest. By December 2007 she had 12 customers committed to buying shares of her crop for the 2008 season.

Today Fannie has 60 customers (and she does home delivery of goods to every single customer!) and is hoping to increase that number for the 2015 season. Like most folks who want to eat local and organic Fannie’s loyal patrons have embraced the unpredictability of farm life.

“That is the excitement of it all!”

For sixteen weeks of the year Fannie’s regulars are supplied with organic veggies from Artichokes to Zucchini and everything in between- including every so often rhubarb, ground cherries, fresh free range eggs and jams! Fannie’s V.I.P members also get first crack at her organic free range chicken and turkey and pastured pork.

We’re out in Fannies snow covered field walking along the footpath between her two greenhouses. The sun is brilliant. The snow crunches and pops beneath our feet. The cold is biting but Fannie defies it without a coat or gloves. Her spring is coming and in her mind she must be imagining the heat of the sun on her back and the warm earth between her fingers.

“When I look back at my corporate life I’d spend two hours to get to work, two hours to get home from work and I’d work for twelve hours a day. And now I’m in my jeans, no make-up. When September comes and everyone is rushing back to work I’m sitting on a milk crate in my pajamas picking beans. There is a romance to it. And there is a lot of heartache and hard work too. But it has to do with your passion. I didn’t know that I would be so much into this. My grandfather was a farmer in France. I think it is in my blood. The day I stop feeling all this excitement is the day I’ll pack it in. And after almost ten years, I can honestly say that I don’t think it will happen.” 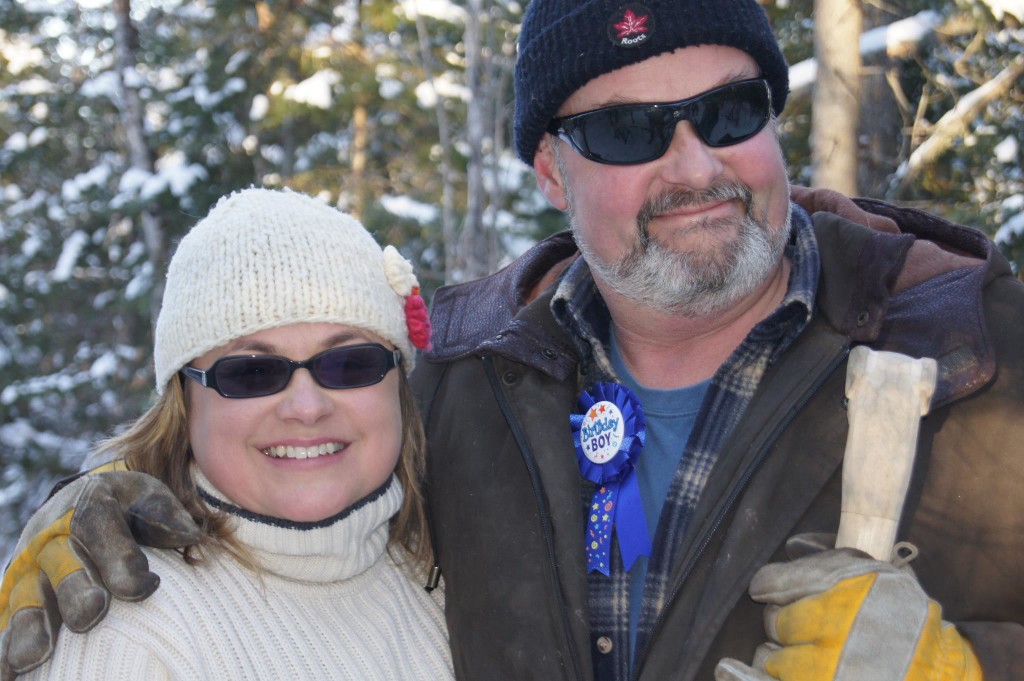 Fannie and Ken McFadden. “It is a fun life. If Ken wasn’t into it this would not be possible. And I think it is magical for our relationship. I think when people work together it does strengthen their relationship. So that’s the wonder of all of this.”