A motley crew of Saultites attended a public consultation on the government’s proposed Basic Income Guarantee pilot project on Wednesday evening. The study aims to explore how a basic income “might reduce poverty and improve health, housing and employment outcomes in Ontario.” The concept of a basic income for citizens is not a new one and pilots have been implemented in Europe as well as Canada. Dauphin, Manitoba undertook such an experiment back in the 70’s and more recently P.E.I has expressed an interest in exploring the potential of a basic income for citizens. 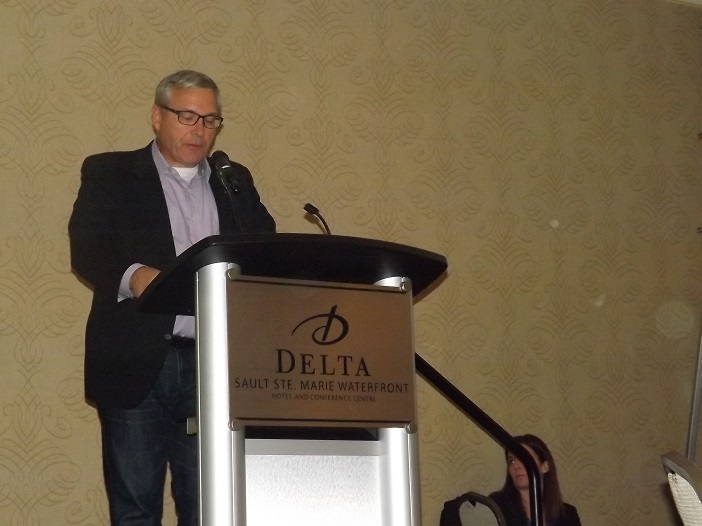 Ontario Minister of Housing, Chris Ballard, made a brief speech to the crowd of 150 or so attendees whose opinions were assorted on the idea of the pilot project. Minister Ballard acknowledged the ‘unrest’ surrounding the proposal.

“People are here because they have questions. Tonight will be a great opportunity for us to listen to concerns and maybe answer a few questions,” Ballard commented. Ballard offered that political support around the pilot has demonstrated equal representation stating, “The topic appeals to a wide variety of spectrums. Hugh Segal is a former Tory aid and wrote the paper for us. Senator Art Eggleton- a Liberal has been pushing hard on this and in a number of ridings NDP members have been out talking it up at the table.”

In Sault Ste. Marie, where so many people struggle to make ends meet, it may have been surprising that some people would be skeptical about and even oppose the BIG pilot. Though the most recent data available through Stats Canada reaches back seven years, statistics provides a concise snapshot of Sault Ste. Marie’s situation of poverty.

Poverty is often defined by low-income cut off measures. A quick look at the most recent Stats Canada findings suggests that a significant percentage – possibly upwards of 25%, of Sault Ste. Marie’s population experience low-income, poverty or unemployment.

According to the 2011 National Household Survey 22,730 individuals in Sault Ste. Marie are drawing annual earnings at the low-income cut off level. The number of people living in low-income households is 10,685. This discrepancy can be attributed to individuals drawing low-income earnings but living in a household where additional income is generated either by a partner or otherwise.

According to the most recent Statistics Canada findings, in Sault Ste. Marie low-income cut offs in lone-parent homes have been established at $27, 243 after tax per year. Half of family homes where mom is the sole provider are only slightly above the low-income cut off and after taxes earnings are at or below $28, 585 per year.

Mike Balkwill is a volunteer with the Put the Food in the Budget campaign. Their steering committee is composed of people who experience low-income and forty communities in Ontario are participating in the campaign. 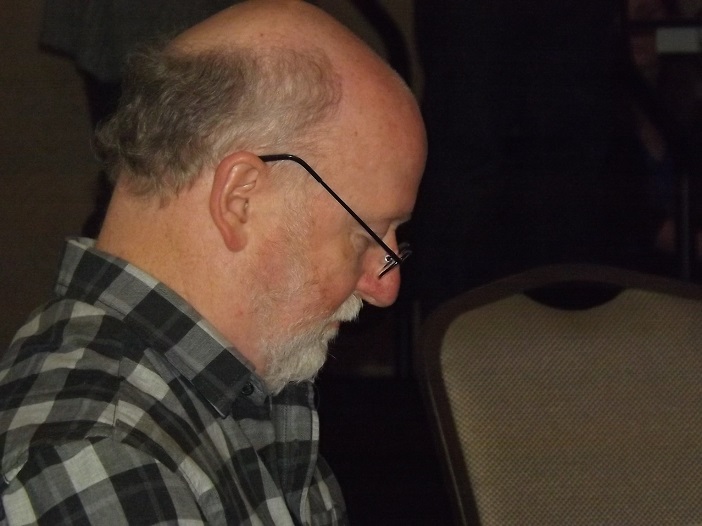 Of the Basic Income pilot Balkwill remarked, “We are very concerned that the government is using the BI pilot as a way to delay action on raising the rates. Senator Hue Segal said that there’s no way you can argue that current social assistance rates are adequate. So if they are inadequate why aren’t they raising the rates now?”

As an example of the challenge surviving on Ontario Works, in 2016, a single mother with one child was entitled to $344 plus rent up to a total maximum of $596 per month from OW. The same single mother would receive the maximum CCTB of $416 per month. That’s a monthly total of $1012 to apply towards rent, groceries, transportation, bills and any other incidental that comes up throughout the month.

At the onset of the Wednesday public consultation constituents read and voted in favour of the following emergency resolution:

Whereas Senator Hugh Segal said: It is hard to conclude that the income support that is now available for those living in poverty is adequate in any meaningful way”; Be it resolved that the Government of Ontario immediately raise the Ontario Works rate for a single individual to $1,320 per month and raise ODSP rates by at least $500 per month.

Balkwill expressed myriad concerns with the government’s BI Pilot, stating that the experiment appears to be a way to delay action on raising OW and ODSP rates sooner rather than later. “This pilot will take three to five years to produce results. And several thousand people may participate in the pilot but there are almost a million people who are receiving social assistance right now. And they will remain in deep poverty for the life of this pilot.” 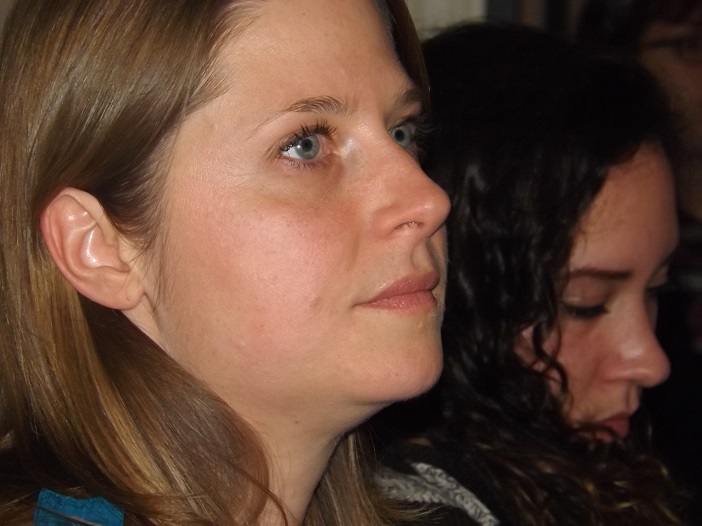 “What is this pilot project? It’s this proposed social experiment on people that are vulnerable and living in poverty. It’s not even proposed to happen for three to five years. Why aren’t they doing something for people living in poverty now? We have a crisis in our community and across our province. People need money now.” ~ Allyson Schmidt

Minister Ballard acknowledged the immediate need to aid those living in impoverished circumstances stating, “There is a great need for relief as quick as possible. So as a government we need to be looking at what we can do short-term –that’s why we have the social security income working group that will be reporting back to us in the summer. They are a group of experts –they are people with lived experience, who are talking about what is going on in their community and what governments should be doing. Some of the issues that will be raised tonight will probably be reported back by that group as it’s doing its own thinking. So that’s more focused on how we revamp the whole social income security net.” 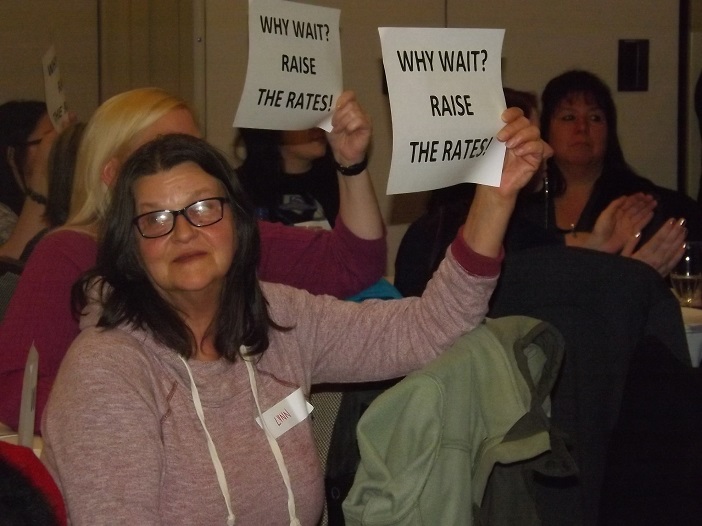 “My concern is that it’s a smoke screen for the government. What I know about it so far sends my red flags up. My biggest concerns is that this is all political agenda. And they say they’ll give money to people in need –well they are supposed to. People are not supposed to live in this country like it’s a third world. We need to make this government accountable. There’s too many people starving. There’s housing crisis and it’s a mess. For the Ontario Coalition of Indigenous People we have member across this province in nine different zones that are suffering and beyond. ” ~ Lynn Leclair

Opponents of the BI pilot have speculated that the project may be part of a larger strategy to eliminate public sector positions. Balkwill remarked, “People who speak in favour of the basic income often say that it will mean that we can do away with the cost of administration, we won’t have to have welfare workers anymore. Well, those welfare workers are well-paid, public sector unionized jobs and we believe that’s part of the government’s real agenda here -to break public sector unions. Because unions are the only institution that stands between the neo-liberal agenda and the full privatization of the public sector.”

Not wanting to be identified by name ‘Melinda’ who is a single parent and a member of the working poor class questioned how would raising the rate on OW or ODSP help her? “I’m not poor enough to collect welfare but I’m poor enough that paying the bills, paying my rent and buying food is a real challenge –and most of the time things don’t get paid and someone in the house isn’t eating –at least not eating healthy food. Kraft Dinner for me after the kids get fed properly. I lay in bed at night wondering how I’m going to make it. I whole-heartedly agree that OW and ODSP rates are obnoxious –a hateful acknowledgment of poor people even, so ‘yes’ raise the rates now. But I struggle too. I don’t have coverage for medication – I do without. I’m hopeful about the idea of a basic income guarantee.”

According to Minister Ballard the government is working to tackle poverty in Ontario through various funding streams, noting a local benefit to the Sault by an increase in the Community Homelessness Prevention Initiative grant. “BI is not an effort to detract from other solutions. We never said ‘it’s BI and nothing else’. It’s one more tool in the tool kit. We’re all trying to figure out how we help people in poverty and how we prevent people from sliding into poverty and how to, perhaps, rejoin the workforce. All of this could have a positive effect on health, education and an overall sense of wellness.”

Balkwill and those in his camp aren’t buying governments pitch on BI. “This is being framed as something very progressive in order to woo public support and then delivering something very conservative later. This is potentially a Trojan Horse. Raise the rates now. There’s no reason millions of people should be left in deep poverty.”

Want to toss in your two cents? Participate in the online Basic Income Pilot public survey by clicking here.