Trending
You are at:Home»Agriculture»Wild Food Foraging With Frank: Hipsters and Old Hippies Welcome!
By Steffanie Petroni on May 25, 2015 Agriculture 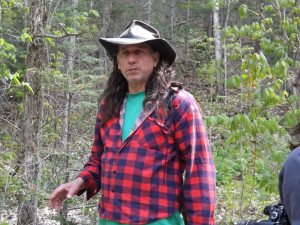 Frank Belleau. “School took me away from my closeness to the land. School taught me that the land and what was on it was a commodity, that the land was not a part of my relations. My grandfather taught me that everything we walk on and touch is our relations. It is a healthier way and better way of looking at things. When you make a decision you just don’t think of yourself, you think of how your decision affects everything.”

Purchasing produce from farmer’s markets in Northern Ontario is becoming easier by the year. However, if you’re only just purchasing local you’re almost a step behind. Foraging for wild food in the North is becoming a trendy weekend activity and a socially approved lifestyle practice. Grubbing around for cow parsnips aren’t just for hippy-dippies anymore.

For some people, foraging for wild food is part of the larger movement to consume local and organic foods. During the early 1950’s the consumer industry conquered agriculture and the pervasiveness of frozen and packaged foods permeated the North American lifestyle. So much so, that rooting around for wild onions or bushwhacking to a cranberry bog was viewed as uncivilized.

Yet here we are some 60 plus years later, amid supersized grocery stores and convenient food stores like M & M Meat Shop, paying an extra 2 bucks for a few sprigs of purslane atop our tossed salad in the most couth restaurants. A refreshing 180 degree turn about but last year my garden was strangled with the naturally growing ‘weed’. But yes, it was delicious and for me- free.

But for some people, like Frank Belleau, foraging the bush for wild food is significant part of his culture. And more so, a way to reclaim what he nearly lost. 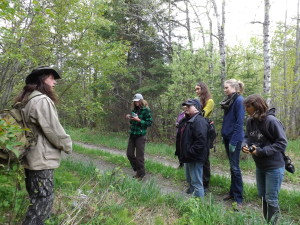 Eight folks were held by rapt attention to Frank’s teachings.

“We have about 130 plants that we can use as food and medicine just in this area. We just don’t know about that stuff anymore. But people are now starting to recognize how important knowledge about these things are,” remarked Frank. He had just wrapped up a two and a half hour foraging tour and we’re talking in his driveway- where the tour finished off.

“We need to create awareness and let people know that we have things in the bush that are beneficial to us.” He adds of the potential opportunity for the people living on the Garden River reserve, “We could turn it into market.”

Eight people met up with Frank at the east end Husky in Sault Ste. Marie on Saturday morning. He led a small convoy out to the Garden River reserve- his stomping ground.

For the first leg of the foraging tour Frank led the group through about half a kilometer of dense bush. A small fog of enthusiastic mosquitos rose up to accompany the adventurers. But when the group broke free of the scrub all the mosquito bites and stinging branch slaps across faces and arms were forgotten.

This wetland produced low bush cranberries- a first time experience for many of the day’s explorers. Though the new crop is still months away, the bog gave up the fermented cranberries from last season. Just as exciting and sweeter to the palate.

“I always knew the bog was here,” said Frank. “But I didn’t know where it was exactly until an Elder took us out to show us the path to it a couple of years ago. We want people to know it’s here. So we can protect it.” 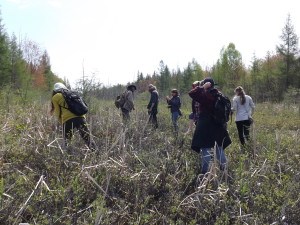 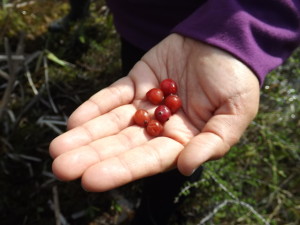 Still early in the season, the bog offers up the fermented but sweeter cranberries of last season. 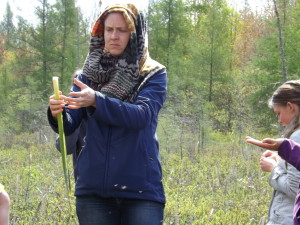 The remainder of the tour was located east of the bog. Wild onions, fiddleheads, trout lily, cow parsnips and lamb’s tail were among the numerous wild plants that Frank led the group to. I had the privilege of taking a personal tour of the very same path with Frank last summer. As some regular readers may recall, I nearly killed myself the next day when I assumed an over familiar attitude with a bunch of milkweed buds. A caution for anyone reading this to be mindful that a couple of nature hikes hardly makes one an expert on the fine art of eating wild.

When in doubt- don’t put it in your mouth! Good advice that has multiple applications. 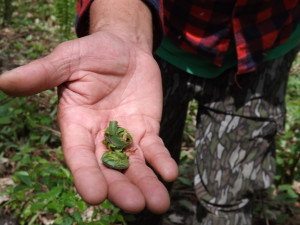 Fiddleheads- the season is almost over. Pick these fern buds early when they are still tightly curled. Yummy nutty flavour. 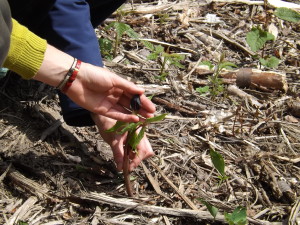 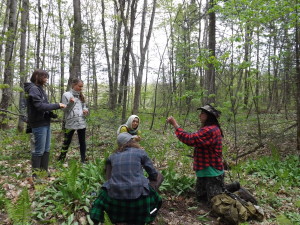 The wild onion patch. Wildly popular. When young the sweet leaves can be eaten in addition to the spicy bulb. Remember- don’t over harvest areas.

Frank grew up very connected to the land. As he has often said of his childhood the bush was his “classroom, jungle gym, pharmacy and grocery store”.

“We were always out in the bush. I had it better then than I do now. I ate a lot healthier.”

He speaks honestly about how it was his return to the land and his cultural ways that saved him from the bottle.

“I’ve been sober now 15 years. But even still I’ve been drunk more in my life than I’ve been sober. What my grandparents taught me kept me sober and out of jail. The more I learned in school the more it made me want to drink. I just wanted to maintain my connection to my culture. My culture made me stronger and healthier- body, mind and spirit. I just know that what I was doing before coming back to the land – getting drunk, didn’t work. What works now is what I’m doing – sharing with those young ones and showing them a different way. That’s what my grandfather did with me.”

A little girl has appeared in front of Frank. There’s a bunch of neighbourhood kids and small cousins that are hanging out at Frank’s place. He teases her a bit and then tells her where she can find the lost playmate she’s been looking for. She hurries off.

He turns back to our conversation. “For me all of this –living off the land, making things from the land, it’s a spiritual thing. I know I’m doing good because I’m running into good people. We know we have differences but let’s find what is similar. We all want the same thing. We want to be healthy. We want something for our little ones. And we all want to share and get along. Well, most of us do.” 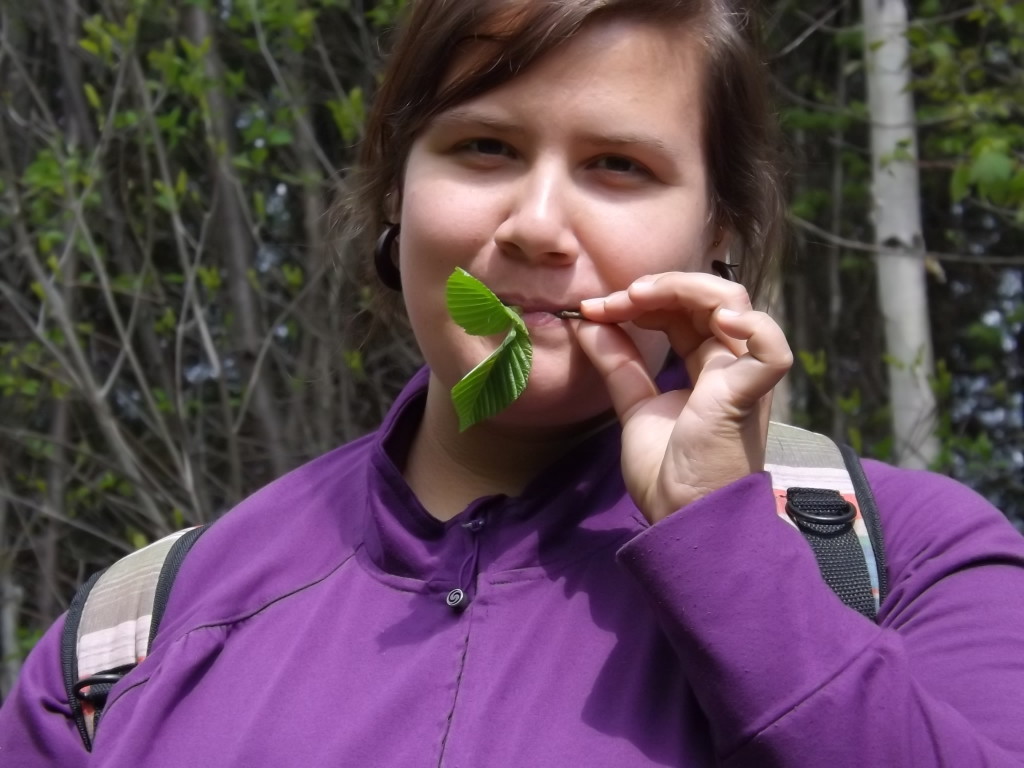 Angela Piaskoski, sampling the minty bark of the yellow birch. “I’ve been doing a little bit of hiking this season and I want to learn a little bit more about what’s on our landscape and what is edible. I just want to learn more while I’m in nature and to become more productive in the area that I live in. It’s been fun- an adventure. I loved the cranberry bog.” 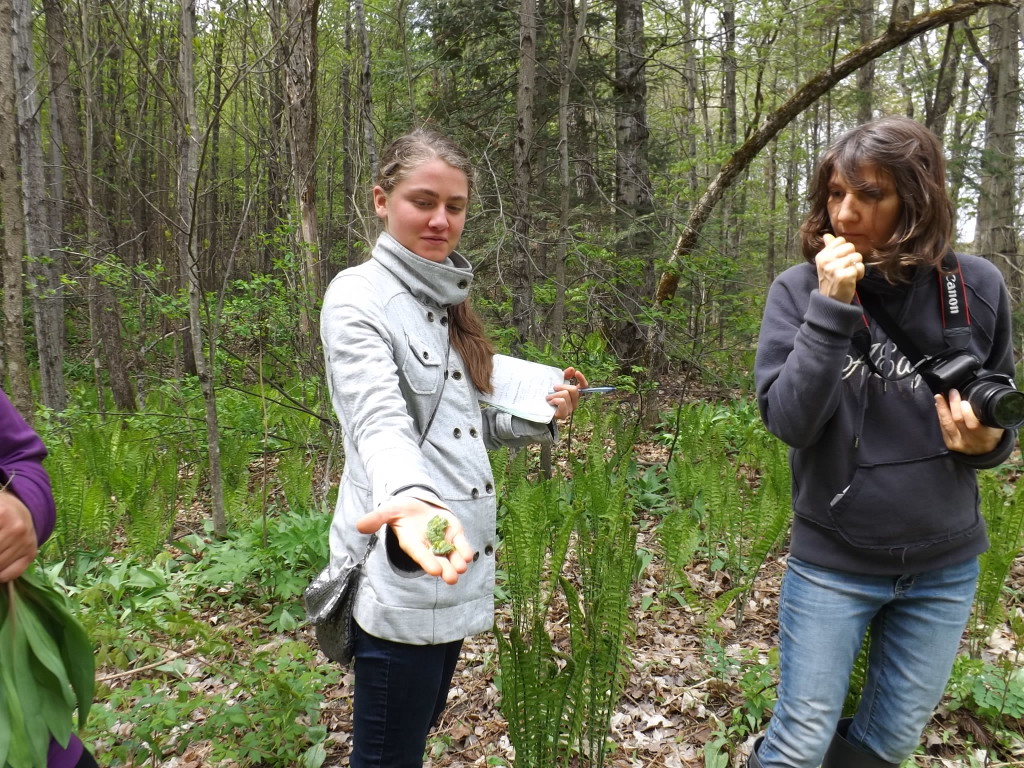 Kylie Adam. “I met Frank at the Food Summit. He was telling us about his tours and it seemed interesting. I’m taking an herb course right now and I try to buy as local as possible. I’m always out in my yard picking dandelions and we also have a garden. I had something in my garden that I thought was a weed but since the walk I think it’s St. John’s Wort. The cranberries were really cool and I learned a lot- I wrote it all down.” 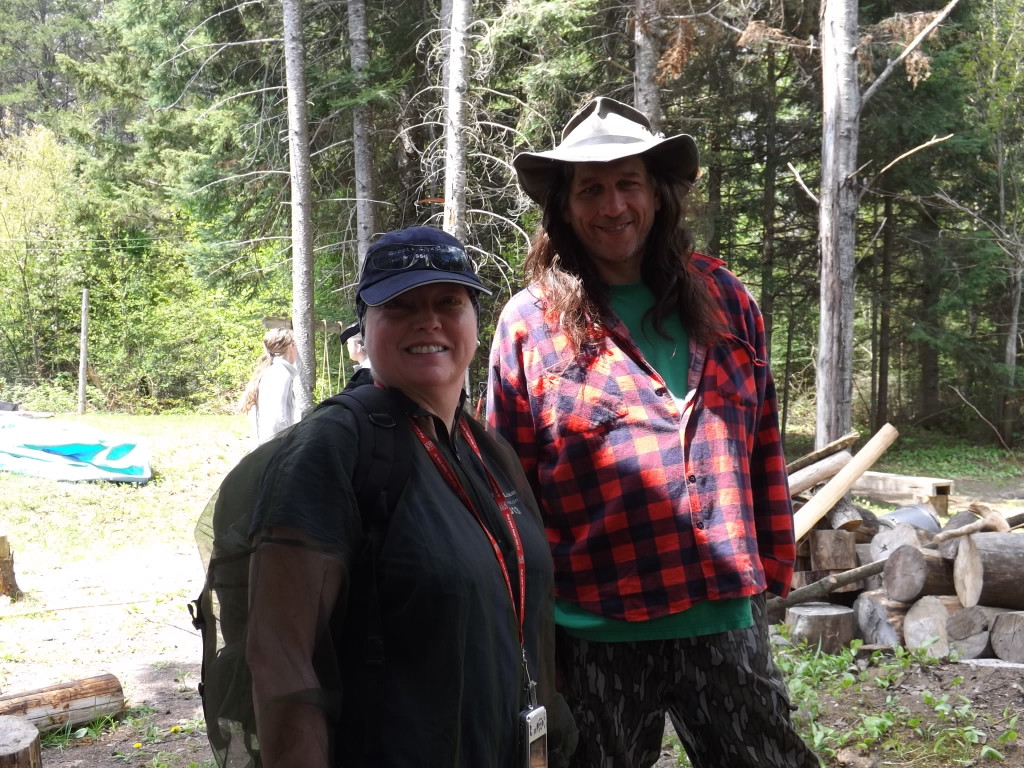 Dana Genoe and Frank Belleau. “I wanted to learn more about the plants we have at the camp that are edible. We have plantain that we found at camp so we located some of that into the garden with kale, spinach and all my greens. I had always heard about the wild onions and have always been intrigued by that so now I’m going to look for it at camp. I had never seen the low bush cranberries before but I’m definitely going to look for that now. And I hadn’t realized that the fine branches of the yellow birch had a minty taste to them.” Her favourite part of the tour? “It was messy and buggy but I think my favourite part of the hike was the cranberry bog. I’ll be going on his next hike for sure. There’s a lot of learning to do and it was very educational.”

Want to take a walk with Frank? His next scheduled tour is June 6th. Contact Frank at clearskybelleau@gmail.com for the details. There is no cost for the walk but honorariums are appreciated.

(feature image. Frank and his group look out over the Garden River)