Trending
You are at:Home»Agriculture»My Walk with Frank, My Brush with Death
By Steffanie Petroni on July 24, 2016 Agriculture

I had been interested in crafting a cheerful account about wild food foraging in the Algoma District for quite a while. After months of unsuccessful networking I finally-and thanks to Amie Harnish, connected to someone who could teach me about feeding myself from the wild land. His name is Frank Belleau.

Having been raised with the privilege that comes with being a Northerner, I have spent the best part of my life in the bush. But let me be honest, my experience in the bush was graced with temperamental indoor plumbing and an old General Electric fridge from the 60’s that committed to keeping the potato salad for the weekend only. On the occasion that the sceptic tank blew up or the fridge started running, there was always an uncle on the ready to make ‘roughing it’ a little more pleasant.

There was a part of me that always knew deep down that I wasn’t living a truly rugged life with these antiquated but modern day amenities. It didn’t stop me from loving every moment down below the tree line on Batchewana Bay but I often romanticized a more natural, responsive interaction with the land and lake that I treasured so much. I just didn’t know how to.

So when this past Saturday I finally had the opportunity to learn about true survival upon the Northern landscape I was pretty excited. The day was pleasant enough, not as humid as the weather station predicted and the company was invigorating. Amie and I hadn’t seen each other since the old Sault Youth Association days and we were both looking forward to learning about wild food foraging with Frank. By the end of our day, I was anything but an expert- especially about milkweed but that didn’t curb my enthusiasm.

It would only take me twenty-four hours to crash back down to a sobering reality:  Unless I am lost in the bush during raspberry picking season- I am dead on the spot. 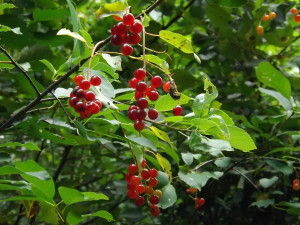 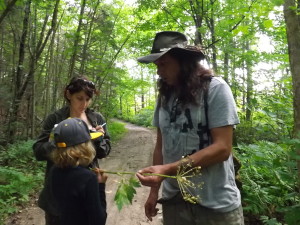 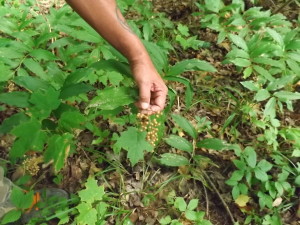 A week earlier Amie introduced Frank and I via Facebook and explained what I was looking for. Frank immediately and good-naturedly invited us to join him on of his well-known ‘grub on tour’ excursions. Born and raised in Garden River, Frank intimately knows the land beneath his feet.

The three of us met at Frank’s home and the tour began in his front yard. Frank makes use of everything that grows and wild plants flourish among his cultivated vegetable beds. Sheep sorrel (tastes like rhubarb), sweet grass, sage and chamomile grow among his tomatoes, potatoes and beans. As he explained the benefits of each plant his seven year old daughter, Hannah, swooped around the garden grabbing a green bean and then some sheep sorrel to nibble on. Frank pointed out that even the willow tree in his yard can be a healing aid, the bark used to make a tea that works as an anti-inflammatory. The berries from the wild sumac bush growing alongside his house are harvested and turned into a cold beverage that tastes like lemonade. 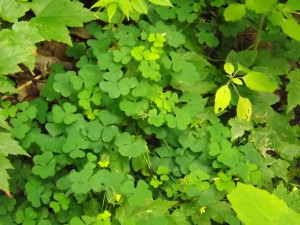 Wood Sorrel- enjoyable sour taste as is or add to salad 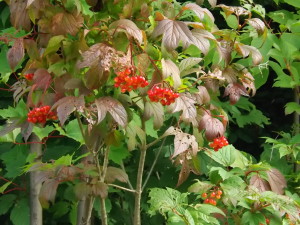 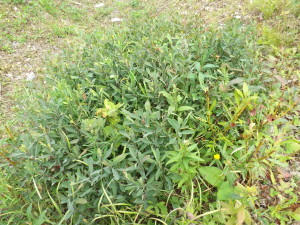 On the one kilometer walk from Frank’s home to the Garden River he showed us at least 32 edible plant species. The plants grew in ditches, fields, at the end of a driveway and in the bush. When Frank was young, foraging for wild edibles wasn’t just a cool, hipster hobby, it was about basic survival. 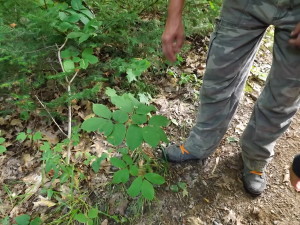 Sarsaparilla- chew on root or great for tea

“A lot of times there wasn’t food in the cupboard. Things were very tight. Back then anything that had four legs and ran across the yard was lucky if it made it to the other side.” Frank lifted his arm to the bush in front of him and said, “When we were kids that was our downtown. That was our jungle gym, our babysitter, our medicine cabinet, our grocery store- all the above.”

Even though the extreme need to forage is gone Frank cherishes his traditional upbringing and takes pride in sharing his knowledge. “My grandparents taught us because this was something that was their custom and way. And now I teach my kids and their little chums come and pick with us sometimes. And sometimes I work with the schools and the kids come out here for a tour. We need to keep doing this so we don’t lose it. It’s a way of maintaining closeness to the land. If you don’t know that it’s there then you’re not going to protect it.” 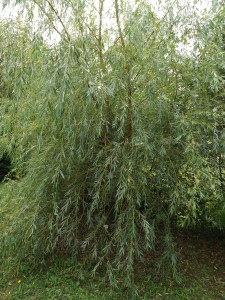 The conversation was intermittent as Frank often called our attention to the edibles on the walk- milkweed, highbush cranberries, lamb’s quarters, yarrow, horse tail, false solomon seal and sweet gale. He cautions that when foraging it is important to spread out one’s picking and to not over pick. “Don’t pick the whole plant. Always leave about 40% of the plant so that it can reseed. We never clean a whole patch of berries for example.”

Both of Frank’s parents are survivors of residential schools. Growing up Frank was bused to Sault Ste. Marie for school but those years did not cultivate good memories. “We pretty much had the same stuff shoved down our throats that our parents had. I was strapped pretty much every day for having long hair and acting like a… acting like an Indian.”

We were walking back to Frank’s house and he stopped at the sound of a Pileated Woodpecker that called out to us from his perch on top of a telephone pole. “What is kind of weird now is that they tell me to come to the school and to show the kids how to carve. It means more to me than a hollow apology. They are saying come back and be yourself, teach us about your ancestors. My education came from what my ancestors taught me, nothing that I learned in school.”

We continued on and Frank waved to a few neighbours. “Today it’s all about sharing. We get along and share with each other. It’s about co-existing and learning from each other. I was asked to help with our community garden,” Frank throws his arms wide open and grins. “But I like to try to encourage people to treat the whole world like a community garden.” 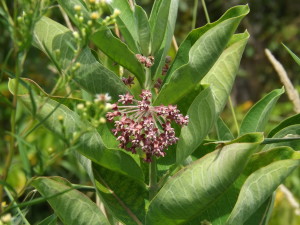 And that would have been and could have been a nice ending to this story if I had not decided to run out with my new found knowledge the very next day. Even though my walk with Frank was informative and enlightening it wasn’t enough to make me an expert in wild food foraging. And definitely not an expert about the intricate preparation of milkweed buds.

When Frank showed me what the flower of the milkweed plant looked like I was way too excited. I had grown up with the plant my entire life but never knew it by name. When I was in my early twenties I’d walk home from work along the train tracks where milkweed grew aplenty. I’d often break the stem that was loaded with heavy and fragrant purple blooms and race home only to have the flower die before I could even transfer the stems into a vase of water. 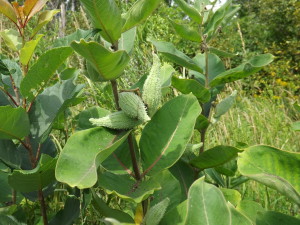 So on Sunday I jumped into my car with an empty grocery bag, headed back to those familiar train tracks and then returned home with about 40 milkweed buds that took all of three minutes to pick. I prepared the buds two ways- a sweet sautee of sliced milkweed with  tomato’s and herbs from my garden, and crispy battered milkweed buds, complete with pictures to demonstrate the cleverness of my productive application of what I had thought I learned the day before.

Both preparations were delicious. Do not, I repeat, DO NOT prepare and consume milkweed this way. 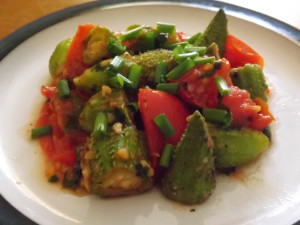 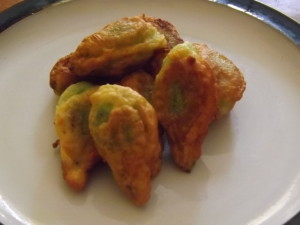 I had foolishly and arrogantly presumed that one walk with Frank qualified me to mess with these nasty little suckers. Many people are familiar with the deadly Japanese Fugu fish – better known as the Puffer fish. Chefs are trained for years before being allowed to serve this potentially lethal delicacy that if not prepared correctly can kill those who consume toxic parts of the fish. For me, milkweed buds are like the Fugu fish of the North.

Twenty minutes after I ingested my gourmet milkweed buds it hit me like a brick wall. It didn’t creep up on me, it slammed me. Cold sweats, fuzzy peripheral vision and forceful vomiting ensued for two hours. It wasn’t the mutually agreeable kind of vomiting that occurs between the mind and body, both rationalizing that we would all feel better once I brought up the offending source. There was no choice involved in the matter. In fact it felt like two supernaturally sized iron hands were wrapped around my entire torso and mercilessly crushing out the contents of my stomach. Even as I type this my ribcage and back still ache from the violence of the experience. When I started bringing up thick yellow bile I was pretty sure I had been poisoned.

At some point during this agony my 15 yr. old son returned home. When I could lift my head out of the toilet I told him what I had ate. Being the sensible young man that he is he immediately turned to the internet for some answers- something I should have done before running my adventurous little cooking experiment. “Mom, you’d better go to the hospital,” he said. “You could die.” This was good advice that I didn’t take. However, I’d advise anyone who finds themselves in a similar situation to seek medical intervention.

What my son had discovered, and what I later researched for myself, was that if not prepared properly or if picked at the wrong time in the plants maturity, milkweed can be toxic. In addition to harvesting at the proper time, it is recommended that the buds are well boiled with several changes of water to remove the toxic properties found in the plant. I was fortunate in that the variety of milkweed that grows in the Algoma District is not as toxic as its milkweed cousins found in other parts of North America.

I survived my encounter with milkweed and learned a humble lesson in the process. The information that Frank shared with me on that short walk was just a tiny fragment of knowledge that came from a wealth of traditional teachings passed down through the generations and from the many years of his own lived experiences. I learned, very dramatically, that this is a very complex knowledge that takes a lifetime to acquire and it is a knowledge that should be respected.

Will I eat milkweed again? Probably not. Will I take a walk with Frank again? I hope so. 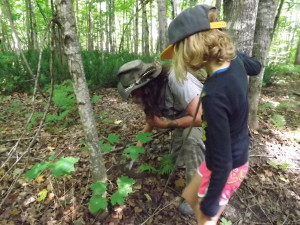 Frank digging as Hannah looks on. 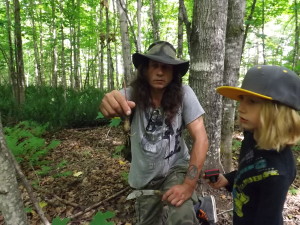 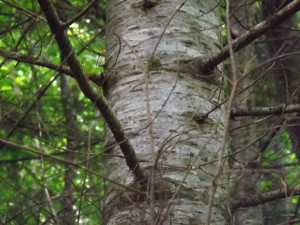