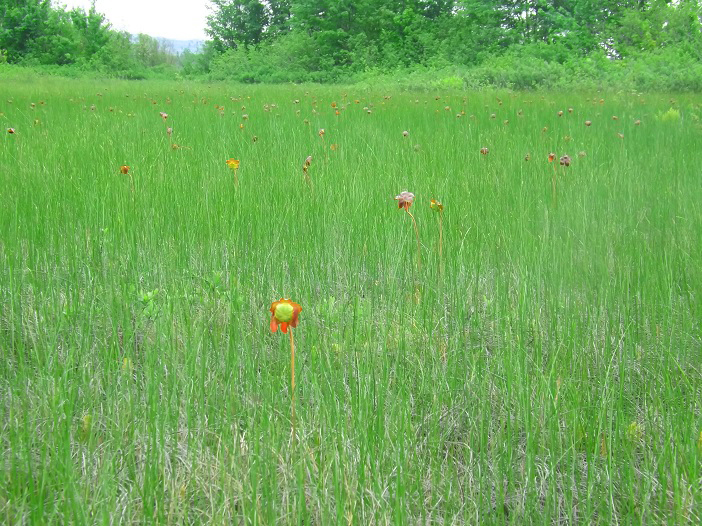 The Francis Hilb Preserve- in the fall this fen will be covered with cranberries. Right now the wetland is covered with insectivore plants. In another week or so, this fen will be ablaze with colour as wetland plants coming to life- bog rosemary and Arethusa bulbosa or the dragon’s mouth, among the unique display.

Marshes, swamps, bogs, and fens –all are classified as wetlands, each possessing their own unique values. Natural functions of wetlands protect and improve water quality, provide habitat for fish and wildlife, and maintain surface water during dry periods. And inherent to all wetlands is their unmatched ability to serve as massive sponges that hold back floodwaters –a characteristic that can be appreciated by many Goulais Bay residents.

The Francis Hilb Preserve, a land donation to the Lake Superior Watershed 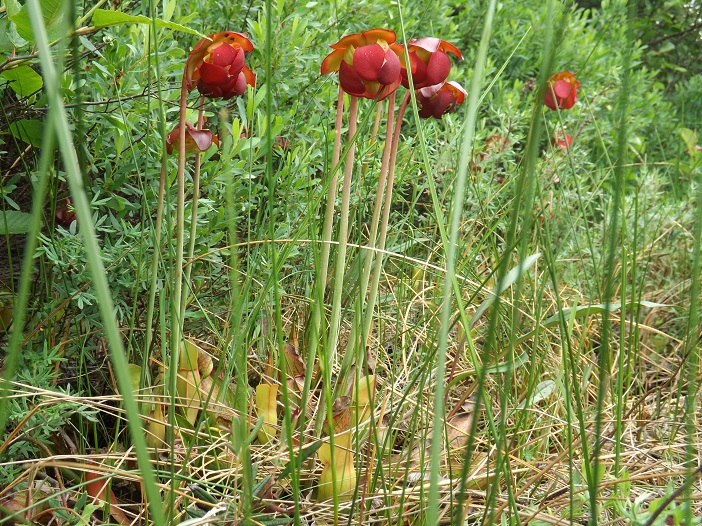 Pitcher Plant- An insectivorous plant. It is not the rich burgundy flower that traps insects but the cup shaped leaves at the base of the plant. Sliding your finger along the interior of the cup produces a gentle pulse, as the leaf curls slightly around the finger, and little ‘feelers’ rise up to hold their prey.

Conservancy, is a 9-acre fen that progresses from the ever changing shoreline of Lake Superior’s Goulais Bay, eventually vanishing into the ancient boreal forest of birch, cedar, spruce, pines, balsam and alders.

Fens are differentiated by a water table close to the surface and therefore remain very wet with minimal water movement.

Sue Meades, a taxonomist, identified over 75 plant species on the Preserve in 2014. “The main thing to remember is that because fens are fairly shallow wetlands, 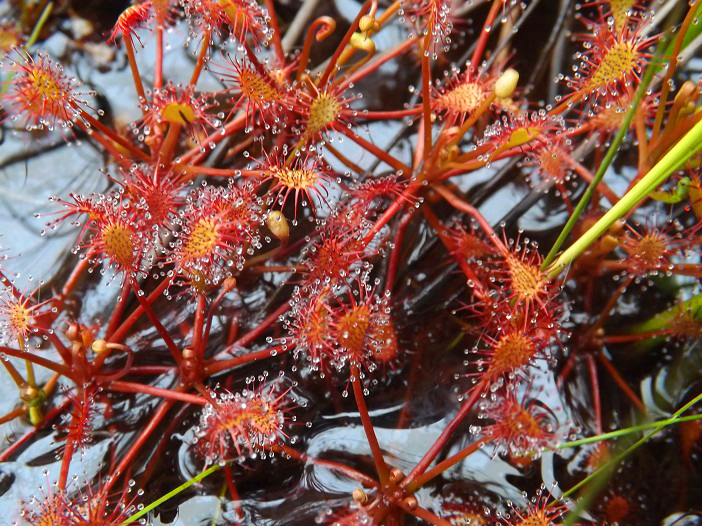 the mineral soil is right near the surface, it is easy to disturb and damage the plants by walking through it,” remarked Meades. Meades intends to revisit the fen to build on her original inventory assessment.

Fens are considered the rarest of wetlands in the North and host a very high diversity of plant and animal life. Many years ago, before truckloads of dirt and gravel were poured along the beaches of Goulais Bay to develop homes and camps along the waterfront, fens articulated the Goulais 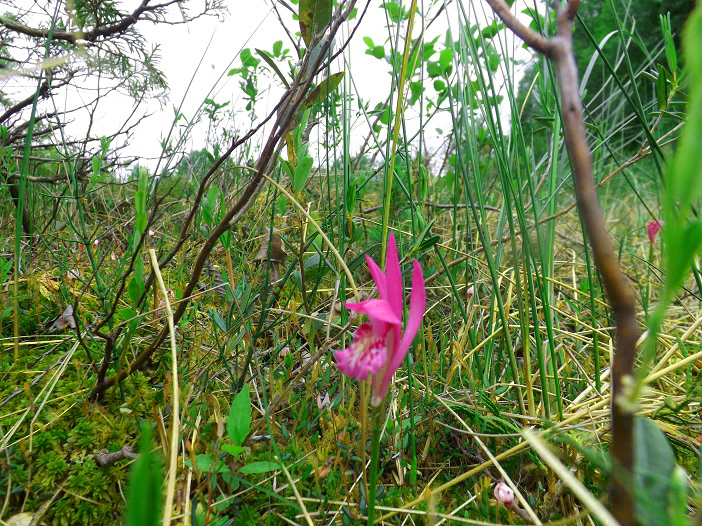 Arethusa bulbosa, the dragon’s mouth or less commonly called ‘swamp pink’. One of the many beautiful flora gifts offered up by the fen.

“There is a very small percentage of wetland remaining on Lake Superior, so this is a very important ecosystem on Goulais Bay,” remarked Joanie McGuffin, Executive Director of LSWC.

* The Algoma District falls within the catchment of Ecoregion 5E. The ecoregion known as the Georgian Bay Ecoregion, “is situated on the southern portion of the Precambrian Shield, in south-central Ontario, extending from southeastern Lake Superior in the west to the central portion of the Ottawa River valley and the Quebec border in the east. It encompasses 7,447,869 ha (7.5% of the province).

Sustaining the delicate ecology of a fen requires not only preservation of these rapidly disappearing wetlands, but also minimizing human traffic upon it. Before acquiring the property, McGuffin recalled that the wetland was churned up by frequent four-wheel activity across the fen. “In the past few years the wetland has restored itself. It is pretty amazing.”

In 2013, Lake Superior Watershed Conservancy received a grant from the Great Lakes Community Guardian Fund enabling the development of a boardwalk. 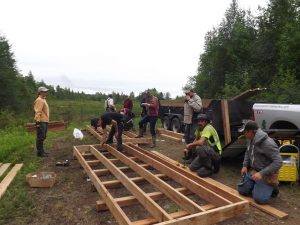 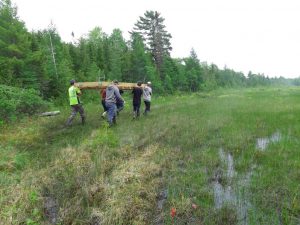 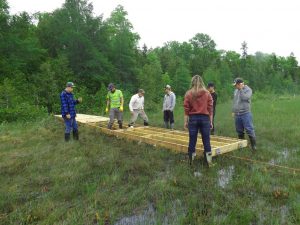 (Above: This week White Pines House Building students, built and assembled the boardwalk for the Francis Hilb Preserve. The second phase will include a viewing platform at the centre of the wetland as well as an extension to the Goulais shore.)

“The Conservancy is all about protecting unique and important ecosystems in the watershed,” remarked McGuffin. “And the boardwalk is also an educational opportunity that allows us to access this ecosystem without harming it.”

Partners on the project also include Soo Mill who discounted as well as donated lumber for the structure, Jesse Fitton of Superior Treeworks who provided oversight and hands on support, and White Pines High School. 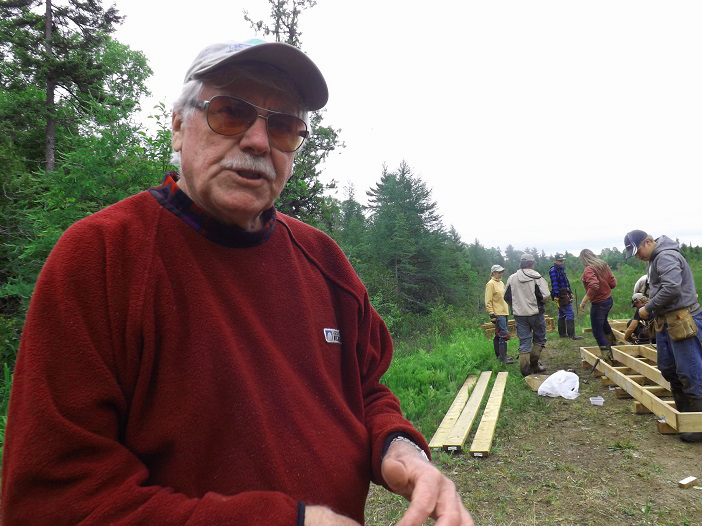 LSWC Board member, Bob Moore -a former White Pines teacher and now retired, used his connections to reach out to White Pines’ House Building Program. This week, five students from the program built and laid out the boardwalk that now lies across the fen. Moore, who in the mid-90’s, conceptualized the Lake Superior Basin project, was thrilled that the young people could make a connection to Lake Superior through their unrelated educational pursuits.

“The Basin project was intended to be an inter-disciplinary program that focused on Lake Superior issues. We had a number of departments- science, mathematics, English to name a few, that bought into the initiative. And the program continues today. After the boardwalk is laid, there are other departments at White Pines that want to create signage and information about the various plant life and wildlife around the wetland,” explained Moore.

Moore, who was also on site to assist with construction, developed the winding bush trail that leads to the boardwalk. “In my retirement it’s nice to work with the Conservancy. And I’m really pleased that the students are here on Lake Superior. It’s like coming full circle.” 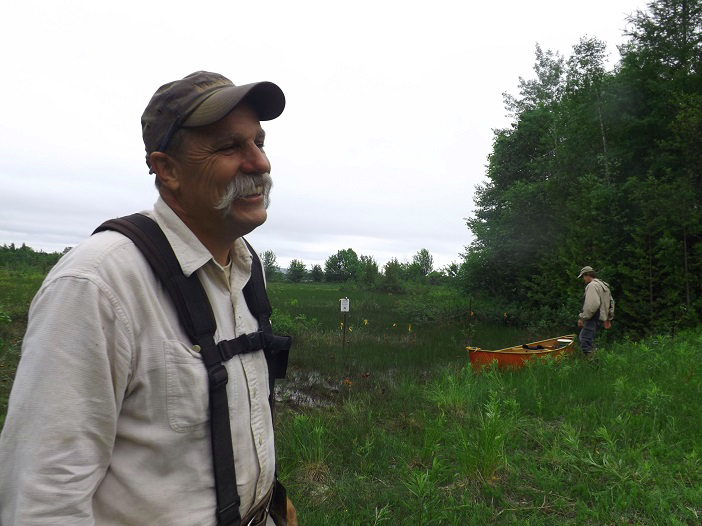 Jim Fitton, is the teacher for the House Building program. Though based out of White Pines students within the public school board can opt for the 4 credit semester program. Sal Dan Developments is an important partner to the program.

“The houses we work on are owned by Sal Dan,” remarked Fitton. “It’s real life work experience. The students work has to pass the inspections just like anybody else. If there are problems we have to tear it apart and fix it. We focus mostly on the carpentry side of things- framing, roofing, windows, doors, stairs, siding, insulation, drywall –they get a pretty good variety of stuff to try.”

Students who are serious about carpentry and demonstrate readiness can pursue an apprenticeship. “I have quite a few connections through the program that helps with that and the hours they spend in the program gives them a good start towards their certification as a carpenter. I’ve had quite a few students go on to get jobs as carpenters and some have their own business. We don’t have big numbers but we’ve had good success with the students that we got.” 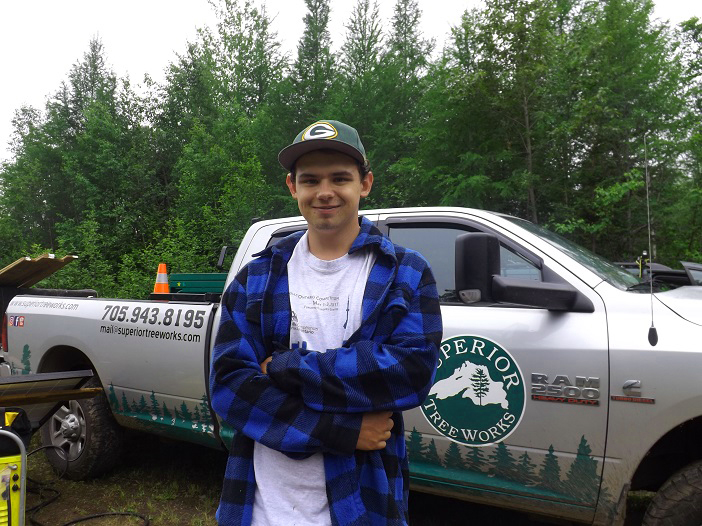 Caleb Childs, is in his second semester of House Building is gunning for an apprenticeship. “I just loved it the first time and wanted to take it again. Last semester we worked on a commercial job and this semester I was working with Sal Dan  framing houses –so I’ve got to experience both sides of it. It’s just been a blast and I really like working with those guys.”

Childs, who has an appreciation for the outdoors, was enthusiastic about contributing to the boardwalk project. “I haven’t been here before but I’d like to come back and show my Dad.”

Moore hopes that schools and the surrounding community will take advantage of the boardwalk that will eventually be expanded to include a viewing platform in the centre of the wetland. “In another week or so this thing will just be illuminated with colours and different plants,” enthused Moore. Bog rosemary and a variety of delicate orchids are only a couple of the plants anticipated to make a showing very soon. “And in the fall the fen is filled with cranberries.”

From a Conservancy perspective McGuffin would like the Algoma community to explore the Francis Hilb Preserve. “Our priority is protection of the wetland and getting people in here via the boardwalk increases the stewardship around this fen. A fence can protect the wetland, but protection is greater when people understand the importance of the ecosystem and are engaged as stewards.”

Laughing Moore added, “As an example the guy that built our parking lot runs a construction company down the road. And I said to him, ‘we have sundews and pitcher plants and they feed on insects’. And he said ‘what, I’ve never heard of that before’. So he made a point of coming to see them.” 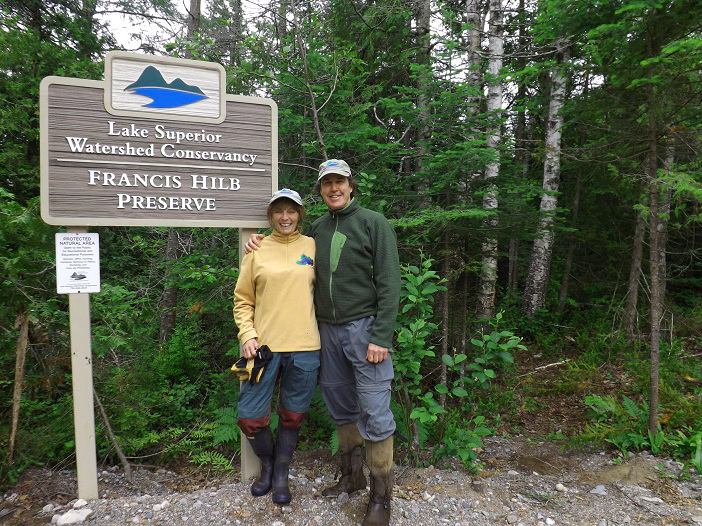 The conservationist adventure team -the McGuffins, pictured in front of the Francis Hilb Preservation entry point about 1 km west along Goulais Mission Road. Just to the right of the sign is a winding bush trail, accessible by foot only, that leads to the boardwalk and wetland.

Click these links to learn more about the Lake Superior Watershed Conservancy and the Francis Hilb Preserve!