Trending
You are at:Home»Agriculture»The Farmer’s Market: When You’re Too Poor To Support Local
By Steffanie Petroni on July 23, 2015 Agriculture

But this great time isn’t an inclusive event –not even by a stretch. Supporting local farmers is a good thing to do but it is reserved for those who enjoy the benefit of a disposable income.

A few years ago I wouldn’t have agreed either, tossing around handy idioms like ‘oh it’s all about prioritizing’ or ‘you know when you eat healthy food you need less of it’ – but that was when I was growing my own vegetables. This year is my first in a while without a garden. A couple of weeks ago I was reminded that buying local can be a burden on the purse strings as I walked away from the farmer’s market with my $7 bag of produce- 1 head of bok choy and 2 bunches of green onions. 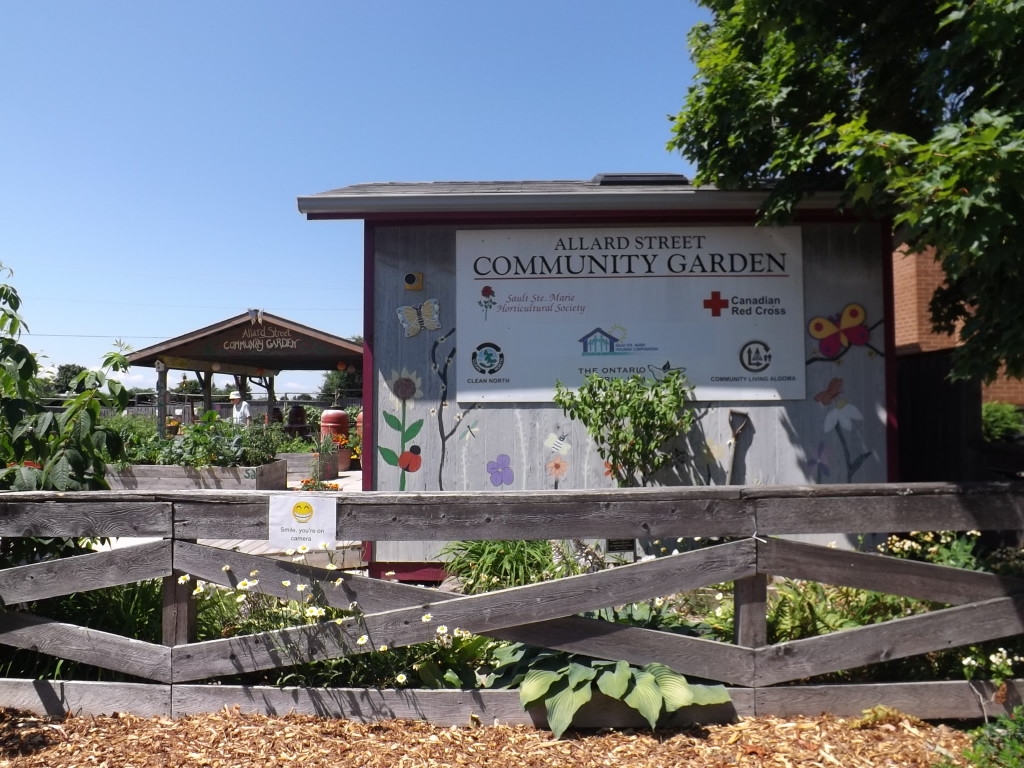 Suzanne Hanna is the coordinator of the Allard Street Community Garden in Sault Ste. Marie.

“If you don’t have a lot of money you miss out on fresh local food. When you go to a Farmer’s Market it is not low-income food. Farmers are trying to make a living and rightfully so. Food does cost money to produce.”

The Community Garden has about 68 garden boxes –eight of which are supported by the Red Cross, and the remainder are rented by community members for a very low fee. Sault Ste. Marie hosts 4 community gardens but Hanna says it’s just not enough.

“Sudbury has 20 community gardens. They are twice the size of our community so that means that we should have 10 gardens. We’re at 4 and it’s taken us almost 8 years to get to this point. Sudbury has set money aside in each of their Wards.”

Connecting low-income earners to local food is a shared concern across the country. Local solutions are occurring in places like B.C where a voucher system has been implemented at their farmer’s markets across the province. Once a week households enrolled in the program receive a minimum of $15 in coupons that can be spent on fruit, vegetables, dairy, eggs, nuts and meat. The funding for this initiative is provided by the B.C. Ministry of Health and various funders within the province.

A few places in Ontario also offer a voucher program through various farmer’s markets and food shares. The West End Food Co-op in Toronto has created a Co-op Cred system to use at the farmer’s market and the co-op store. Volunteers, who tend to be low-income earners, receive credit on their co-op card. As well, those who experience food insecurity but are unable to volunteer can receive credit on a co-op card. Since co-op cards are handed out to every co-op member identifying who is using ‘charitable’ credit and regular credit is impossible thus eliminating the stigma often associated with food-stamp-type programs. It is estimated that the program has increased the local food purchasing power to the tune of $700 per year for folks in the program. Funding is raised through an annual Ride 4 Real Food event. Last year the event raised over $36,000.

Both the BC voucher system and the West End Food Cred system are above and beyond subsidies that participants may already receive through the government.

The need for local solutions when it comes to increasing food security among low income earners -and for that matter increasing support among local producers, is reinforced by Marjorie Stewart, Director of the Vancouver Island Heritage Foodservice Co-op in Nanaimo, B.C.

“Many food initiatives are dependent on the whims of funders. Funders leave a trail of broken hearts behind them as their lists of things that they have temporarily funded gets longer and longer,” lamented Stewart.

Of B.C.’s voucher system Stewart worries about the sustainability of the program.

“The problem is that funders get tired of running a program. They want to see the program get on its feet and be responsible for its own operational cost. I’m not sure this can happen,” continued Stewart. “This is a worldwide issue. That problem is one of social dysfunction which is created by the global economy that has fallen into the trap of maximizing profit at all costs. There’s a serious wealth distribution problem worldwide. No amount of coupon program is ever going to solve that. We need policy changes as well as band aids.” 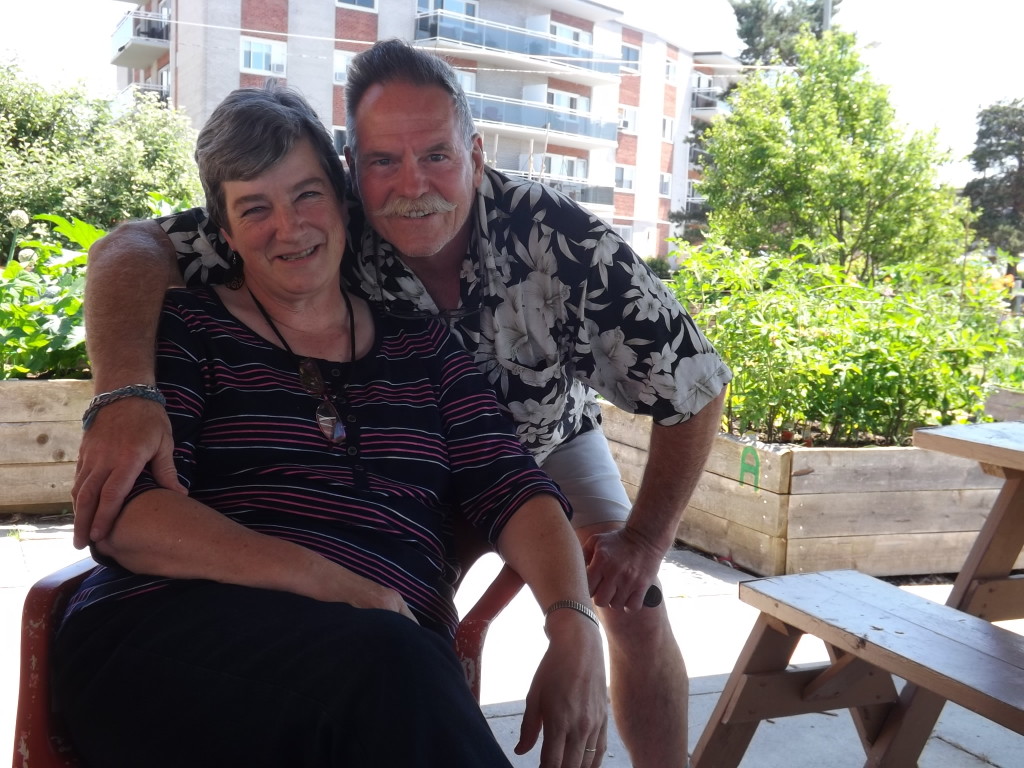 “I’d really like to see more support from the City. It would be great if they did a better job of supporting the community gardens that we do have. It would also be nice if there was a City community garden where the City committed resources to it,” remarked Hanna.

Hanna’s position in the garden is of a volunteer nature. In addition to her ‘day’ job and balancing a busy family life she is pouring an excess of hours into the garden. Burn out is always a concern.

“We need somebody here in the City that has been hired to provide the supports for the community gardens to help with the coordination, the resources, and to help with education,” ruminated Hanna. “We are all volunteers here. Nobody gets paid. I don’t get paid. There is no money here. It’s a big job and a lot of times people will not take on the responsibility of starting up a garden because it’s non-stop. Even when the garden is put to bed it is non-stop.”

The other day I was speaking with a friend who was dumbfounded that there are people in Sault Ste. Marie rooting through dumpsters for their next meal. ‘How is this even possible’ he agonized to me. Until one has walked it or witnessed it firsthand, food insecurity can be a huge learning curve for some folk- and for others, let’s face it, they just don’t care. Why with the Soup Kitchen and all the other food banks in town nobody shouldn’t eat at least once a day right?

In speaking with Ron Sim, manager of the local Soup Kitchen, their annual Christmas food drive will need to be expedited this year. He’d like to swing something in August but not enough people are in town to fill that bus with non-perishables so they’re going to stick it out until September.

The local need for access to food is great. Access to local sustainable food is an even greater challenge.

There is hope though. In addition to community gardens and charitable services, small enterprises like the Gore Street Café have combined the philosophy of supporting local farmers and sharing the buffet table with people of all backgrounds by offering ‘Pay-What-You-Want’ days as well as hosting a monthly evening market where patrons ‘Pay-What-You-Want’ for local produce.

But increasing food security by connecting low-income earners to local producers requires long-term solutions that won’t come easy. Valuing access to healthy food as a basic right inherent to the dignity of all people is the first step in creating those solutions.