She was a city girl hankering for a pastoral life, something a little more elemental. “Nature has always been a key source of comfort for me,” she said.

Born and raised in Toronto, Ontario, Sharon Hunter massaged the film industry and community arts scene, eventually returning to school to acquire a Bachelor of Fine Arts from the Ontario College of Art and Design. Sharon went further, pursuing a teaching degree and hoping to use the leverage to teach art within a First Nation setting. A few years ago she landed in Attawapiskat doing just that. Three years later her gypsy soul became restless and she was ready for a new adventure. 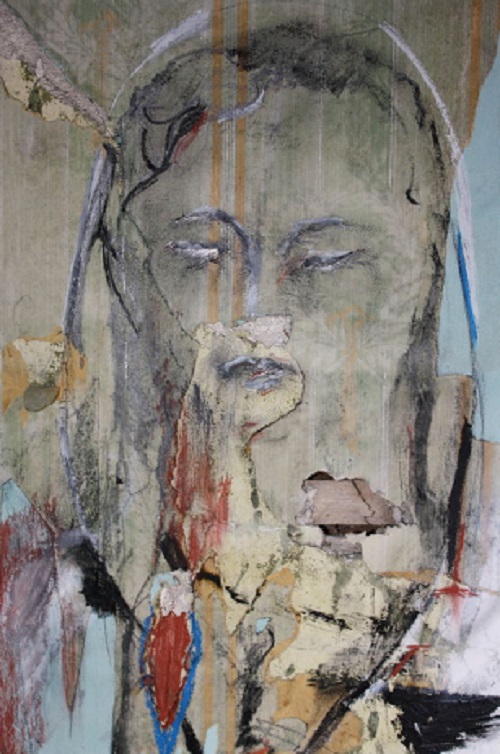 ‘Girl and wolf in living room’ Rural House project, by Sharon Hunter. “I just kind of went and hung out in the house and the stories came to me just from the presence of the house.”

She wasn’t aiming for Rydal Bank, Ontario, when she set out but that’s where she found her next baby- a painting installation in an abandoned house up on Mount Zion Road. She settled in for a few years, picking up little grants here and there to work with communities east and west of her new coordinates. A teaching position with Mississauga First Nation in Blind River, downtown murals with youth in Sault Ste. Marie and her most recent project funded by a Northern Arts grant through the Ontario Arts Council – Parallel Routes.

The long roads travelled by automobile everyday was a culture shock for Sharon who in Toronto, and even Attawapiskat, could transport herself through her own bipedal energy or at least by bicycle. But it was on those long drives that the concept for Parallel Routes was birthed.

“I didn’t know that living here and travelling to Blind River or the Sault every day would mean two hours of travelling on the highway. It was all kind of new to me. And so you’ve got this thin yellow line,” she said slicing her open hand back and forth through the air. “And it’s keeping your life. Both ways.” 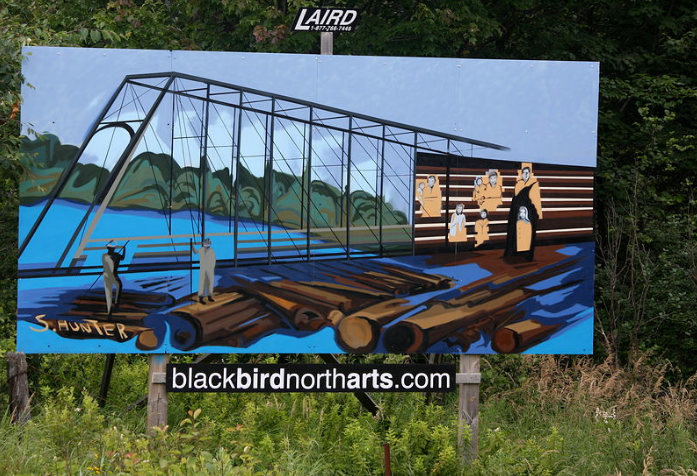 “Driving on the road, I really wanted to paint something. I wanted to give something. I met with people in Iron Bridge and referenced some historical pictures. They felt the bridge was really important to paint. So I did that.”

“I like galleries, they have their place. But people, they’re wandering around in the world doing their thing. An installation is part of people’s environment that they are living in. It’s in their life and it has something to do with their life,” Sharon elaborated.

Parallel Routes was conceptualized by Sharon as a collaborative process with the people that live along the King’s Highway.

“For this particular project and big part of it – the most important part of it, was meeting with the different communities and just hearing about what they wanted to see, what it was that was important to them. I met with Batchewana First Nation elders and youth. They had very strong ideas that connected to the land, people and how we relate to each other. And with the other communities it was kind of iconic imagery –something to do with the mine perhaps. Those are my images on the billboard, but they came from the community.” 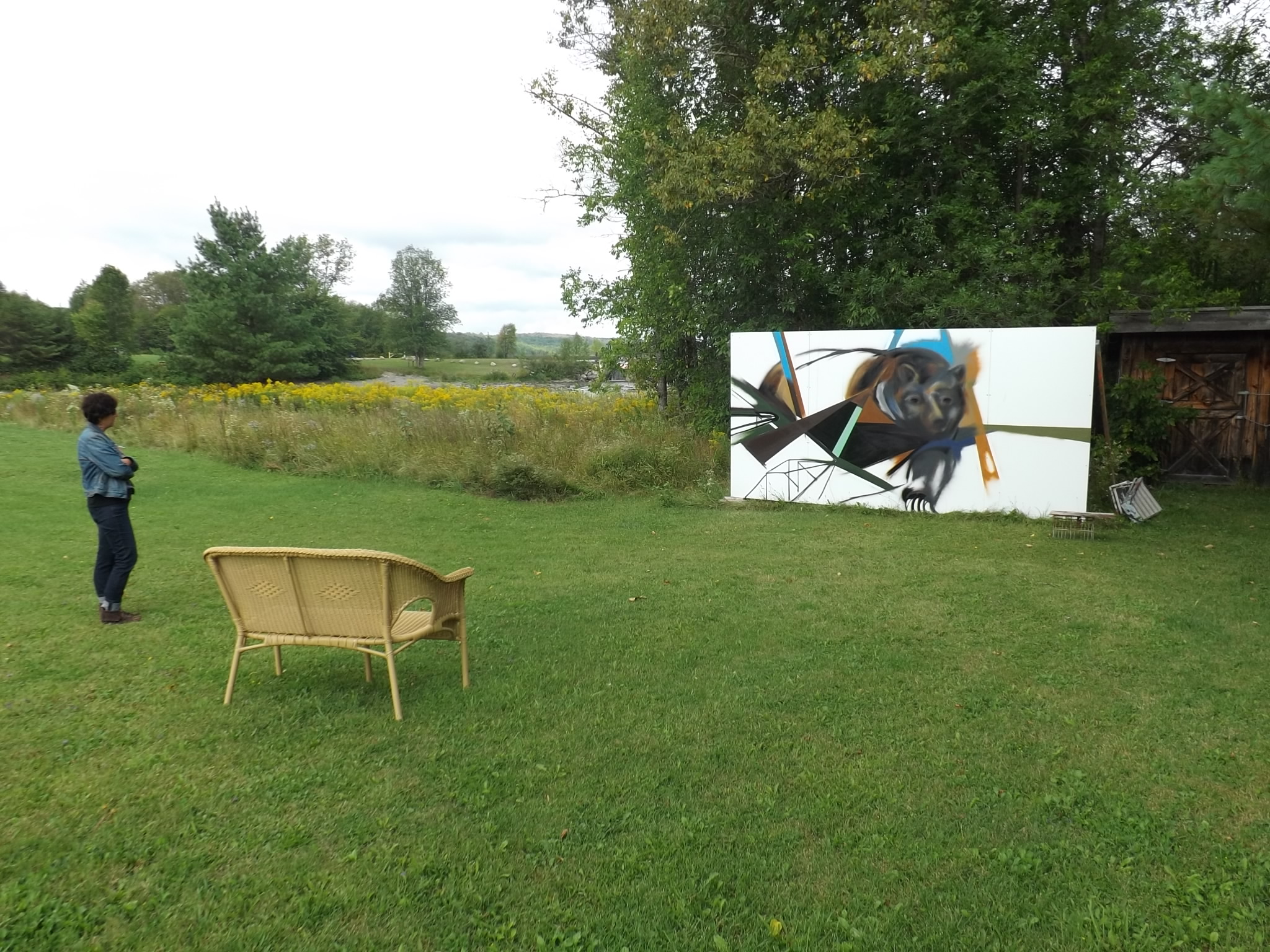 Sharon’s backyard is expansive- ideal for painting billboard murals and occasionally hosting her own outdoor art shows. The artist contemplates her fourth and final installation. If weather cooperates Sharon hopes to have the mural set up in October or November in Echo Bay. “This comes from the ideas that were presented by the Elders and youth from Batchewana First Nation. Clan animals were very important- colour, interconnectedness, connection to the land.”

One doesn’t just paint big billboard murals. There’s an approach that needs to be finessed.

“It’s not like a series of paintings that I can develop and people can get up to them and look at them really closely. For this particular project the audience is on the highway. They have to see it very quickly. Like, people are doing 120 km an hour past these things,” remarked Sharon. “There cannot be very many details in it. It has to read big -big, accurate and high contrast.” 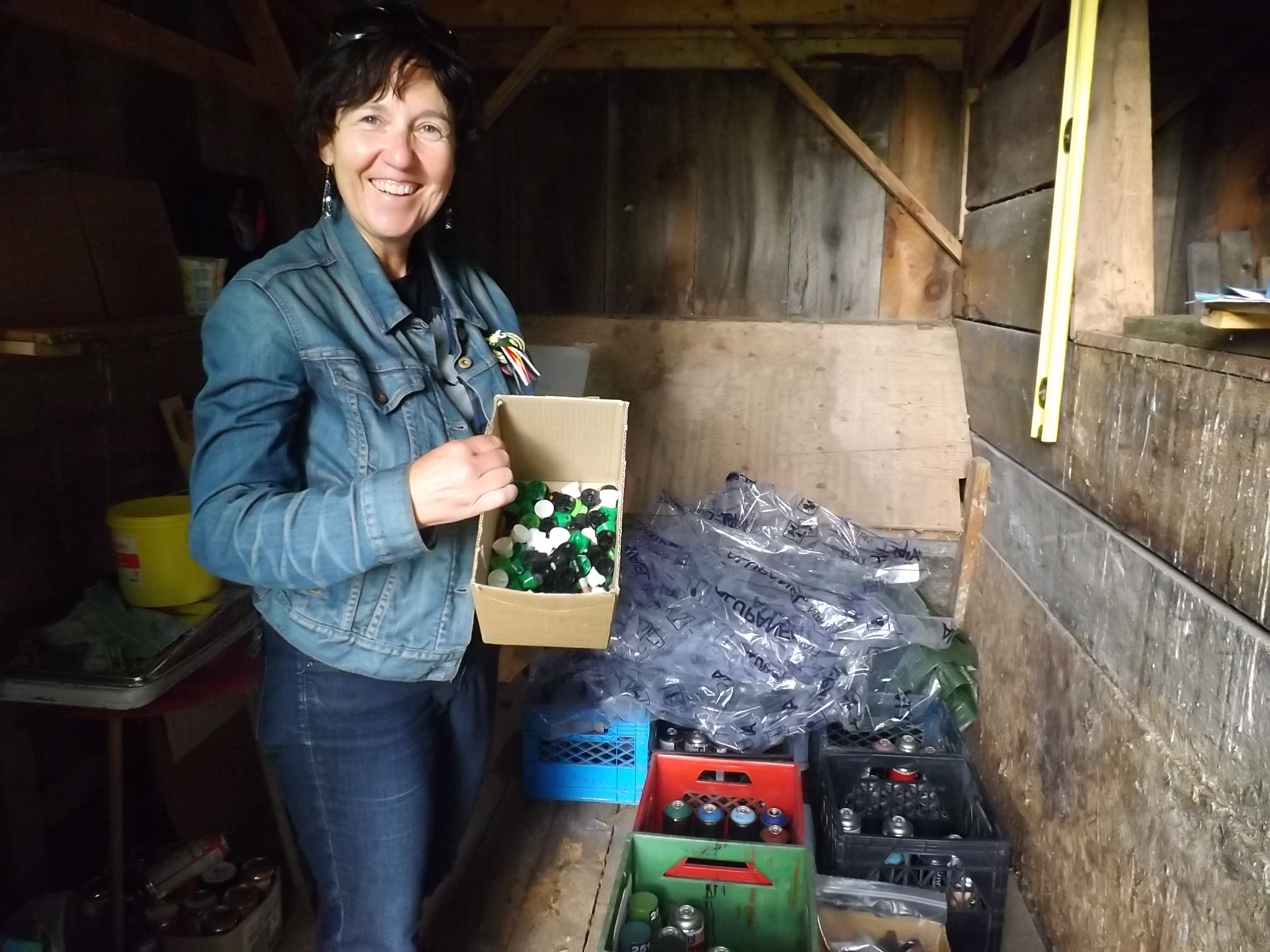 Sharon creates her murals with high end spray paint and when necessary she’ll go in to add definition with regular bucket paint and brushes. Sharon is pictured with her collection of spray paint nozzles. “These are all different caps for the spray paint. Some of the caps will give a big spread and others will give misty sprays of fine lines. A lot is about can control. There’s a lot of movement, there’s a lot of wind. It speckles, it sprays.”

We’ve been chatting in Sharon’s cozy kitchen, sitting at a charming little table that she recovered at the Desbarats junkyard. She’s had the wood stove on and comforting scents of the burning wood and sweet grass waft through the rooms of her charming two story yellow house. Her walls are decorated with her own works as well as the paintings of her son, Misha Hunter.

She discovered later in life that she was Métis. The grandparental connection to residential schools did its damage and the stories were not passed on. But something remained of the culture, of the way that life was valued and lived perhaps. Much of Sharon’s work has been critiqued at large as native artwork but she’s quick to correct the misnomer.

“Some people can say that their cultural identity has been passed on. I can’t even own that or say that because nothing for me was a fluid connection in that way. But it does come out naturally in my work. I don’t want to say that I was inspired by native art- that’s appropriation. Where I’m working and how I’m working is where I’m comfortable.” 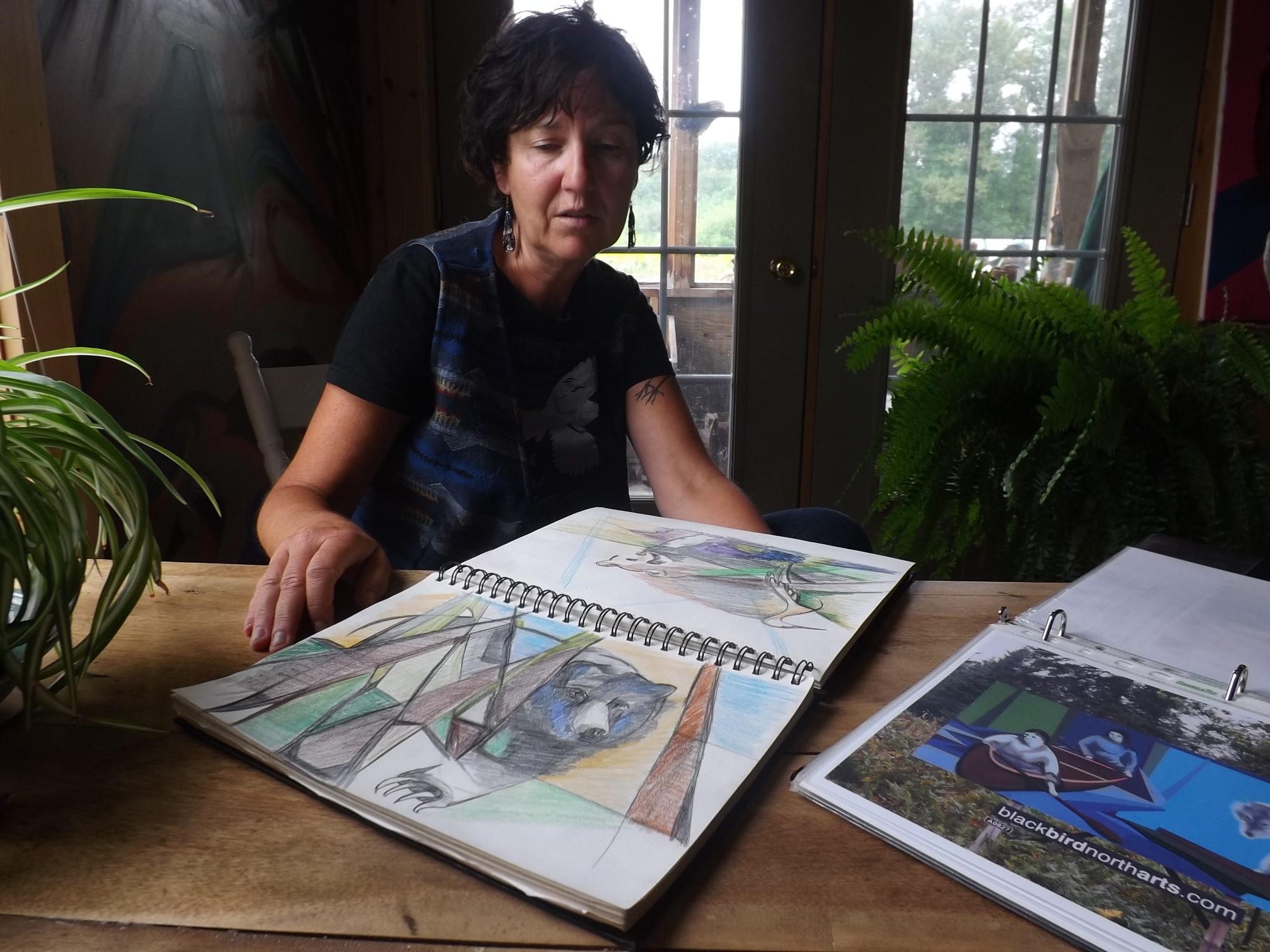 “I think art making isn’t in isolation. It may be at times- I have to be quiet and connected to the work. Other times, it’s reaching out to the community and doing community work which I like.” ~ Sharon Hunter

Sharon is like most artists- scraping by on the skin of her teeth.

It has been a project aim that at the completion of her installation – 4 mural billboards in total, that the townships may want to purchase the relevant images to permanently display either where they are now or elsewhere. However Sharon is also amenable to selling the murals to collectors.

Is anybody looking for a slick installation piece to hang on the side of their red barn?

In the meantime, the grant that took care of material costs and paid a small amount back to Sharon, also covered the cost of rental space to display the billboard murals for one year. If there’s no interested buyers Sharon has two options- decommission the pieces or drum up a fundraiser to cover the rental costs for the display space.

But Sharon’s taking it in stride. She’s got moxy. And she’s got to have it to survive her tough occupation.

“This is a business. You just keep going. There’s some days that are bad, they kind of suck. You just find good things to do and keep your good people around, and it’s a bad day that’s going to pass. I’ve got wood for the fire and other good things. So far it’s working. My rent is low and I just roll my pennies and go to the dump. I’m surviving.”

The first mural created under the OAC grant, located between Desbarats and Bruce Mines. “This image partially came from resource pictures I accessed at Plummer Township. That train went through their train station- it’s a historical piece. One of the things that I wanted to work with here is different perspectives- so playing with lines, depth, block colours. I wanted to make it bold with colours and planes going through each other. This had a lot of detail in it at first so I had to block it out. With this project I do have to go against my natural inclination towards details.”

Interested in purchasing Sharon’s work? Want to commission a piece or get in touch? Check out Sharon’s website blackbirdnortharts.com.