Trending
You are at:Home»Economy»Sault Area Hospital Personal Support Worker’s Put on Alert: Waiting For the Ax
By Steffanie Petroni on March 25, 2016 Economy

About 30 or more Personal Support Workers (PSW) at the Sault Area Hospital (SAH) were notified by letter on March 15th, 2016 that they weren’t being laid off per say but being alerted to the possibility that workers may be reassigned to a more suitable position.

The letter states that SAH is shifting towards a ‘total patient care model’ meaning the work of PSW’s will be shuffled on to Registered Nurses (RN) and Registered Practical Nurses (RPN).

“As a result of this planned model of care change, your current position of Full-Time Personal Support Worker…has been identified as a surplus to hospital needs,” reads the letter copied below. The letter goes on to indicate that SAH is reviewing vacancies that may or may not be “suitable” for PSW reassignment. And as an assurance during this time of alarm for PSW’s, the letter goes on to state that the hospital-sponsored Employee and Family Assistance Program will be available to assist PSW’s and their families “throughout this period.”

An anonymous source from SAH attributed the drastic move to budget management. “Getting rid of PSW’s that make $22 an hour, at top rate, is not going to save the hospital. It’s all about balancing the budget. It’s not that they are magically not needed.”

The source went on to comment that the role of PSW’s was integral to the well-being of the patient.

“The staffing to patient ratio was off the charts to begin with and now you’re taking away the PSW’s who are freeing up the RPN’s and RN’s to handle medical responsibilities rather than trying to meet personal needs. In a way this is going to pressure families to take on the task of care for the patient. A lot of times patients in the hospital are there because the family can’t cope with that persons medical needs. And if someone is committed to the hospital, that bumps them up on the nursing home waiting list. Waiting at home means that person is waiting longer.”

Healthcare advocates will no doubt view SAH’s decision as a huge step backwards in care. For nearly a decade there has been a push for minimum care -3 hours a day per patient at appropriate staff levels, and critics assert that the province hasn’t been putting down good standards.

On bringing this information onto a public platform for Sault Ste. Marie residents the source remarked, “Hopefully this will lead to some positive change and stops the craziness before it moves forward.”

In total, 97 SAH employees made the list — up more than 40-percent from the 68 reported last year.

Sault Ste. Marie, are you concerned about the potential loss of PSW’s at SAH? Contact your servants below. 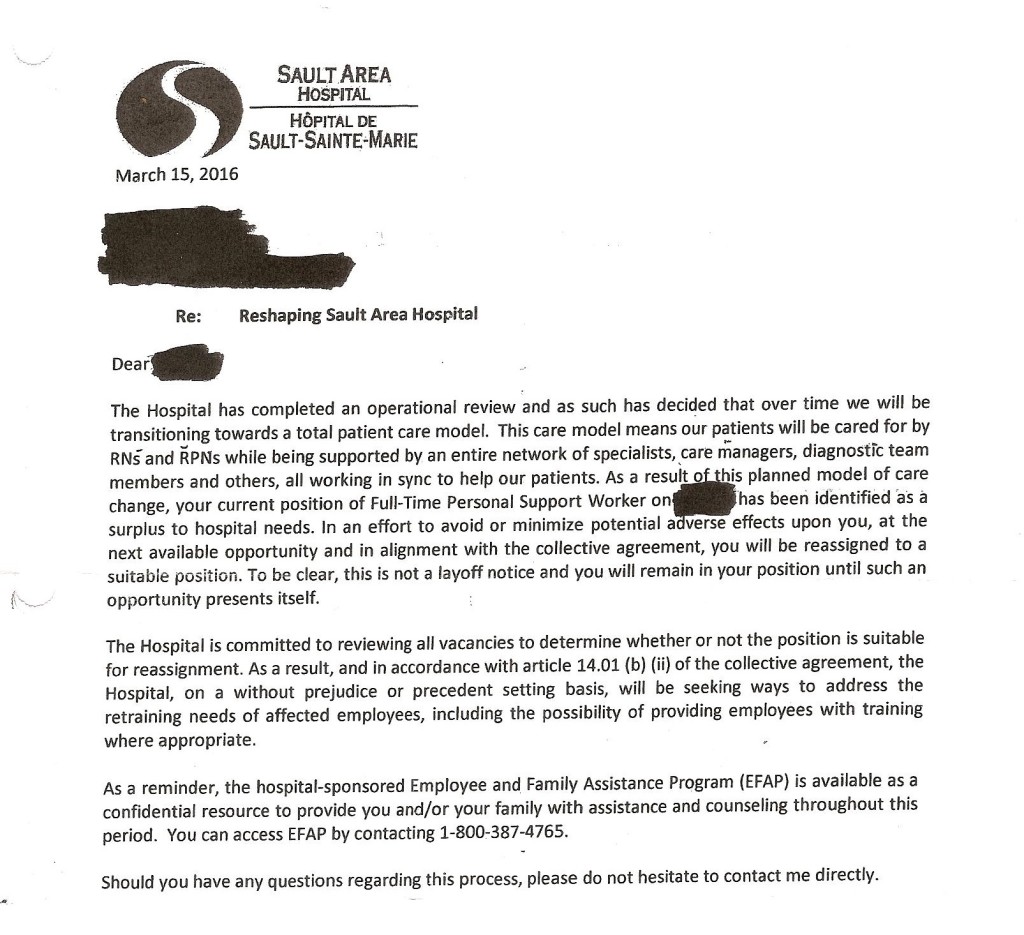