As I settled in for an afternoon of discovery – deep inside Poppy Campaign Headquarters, Branch 25, Royal Canadian Legion, I was struck by the history all around me. Within the walls of ‘the poppy room’ was a dedicated team of historians. This circle of women, who include Elane Turner, Ann Robichaud, Hillie Valiquette, & Gwen Dinsdale were busy with their various 2014 Poppy Campaign roles.  They were tabulating lists, keeping it all straight – receiving  depleted poppy boxes, replenishing them and sending them back out the door  of Branch 25 with  a willing and capable legion  volunteer . They make haste, back out and into the community, exchanging their contents in a loop that will play out until the last of the boxes makes it final rest back in the poppy room until next year.

Framed photographs – most in black and white, hang all around the Poppy Room, serving as guideposts and historical references of those men and women from the District of Algoma, whose lives were intertwined through the armed services.

Gwen Dinsdale receives several phone calls while I was in the Poppy Room – organizations, and individuals calling to make arrangements for wreaths. This list continues to grow longer and longer, as the requests for Remembrance Day Wreaths keep coming in. Gwen has been volunteering in this capacity for some where north of 30 years. It is safe to say, she and the whole Poppy Room gang, are experts in planning for Remembrance Day Ceremonies and successfully implemented Poppy Campaigns.

Ann Robichaud shares information with me about The Colour Party – or The Official Flags which lead the Veterans Parade for Remembrance Day, November 11th. These 6 flags are the old Canadian Flag, the Union Jack Flag, the Provincial Flag, the Legion Flag, the United Nations Flag and the Canadian Flag. Ann, Gwen & Elane are a part of this Colour Party and will be a part of the group leading the Remembrance Day Parade.  As a member of the Colour Party, Ann will be one of the Legion members who represent our community with such pride and honour. The Poppy Room at Branch 25, Royal Canadian Legion is a vibrant space, undertaken by generous hearts and minds. 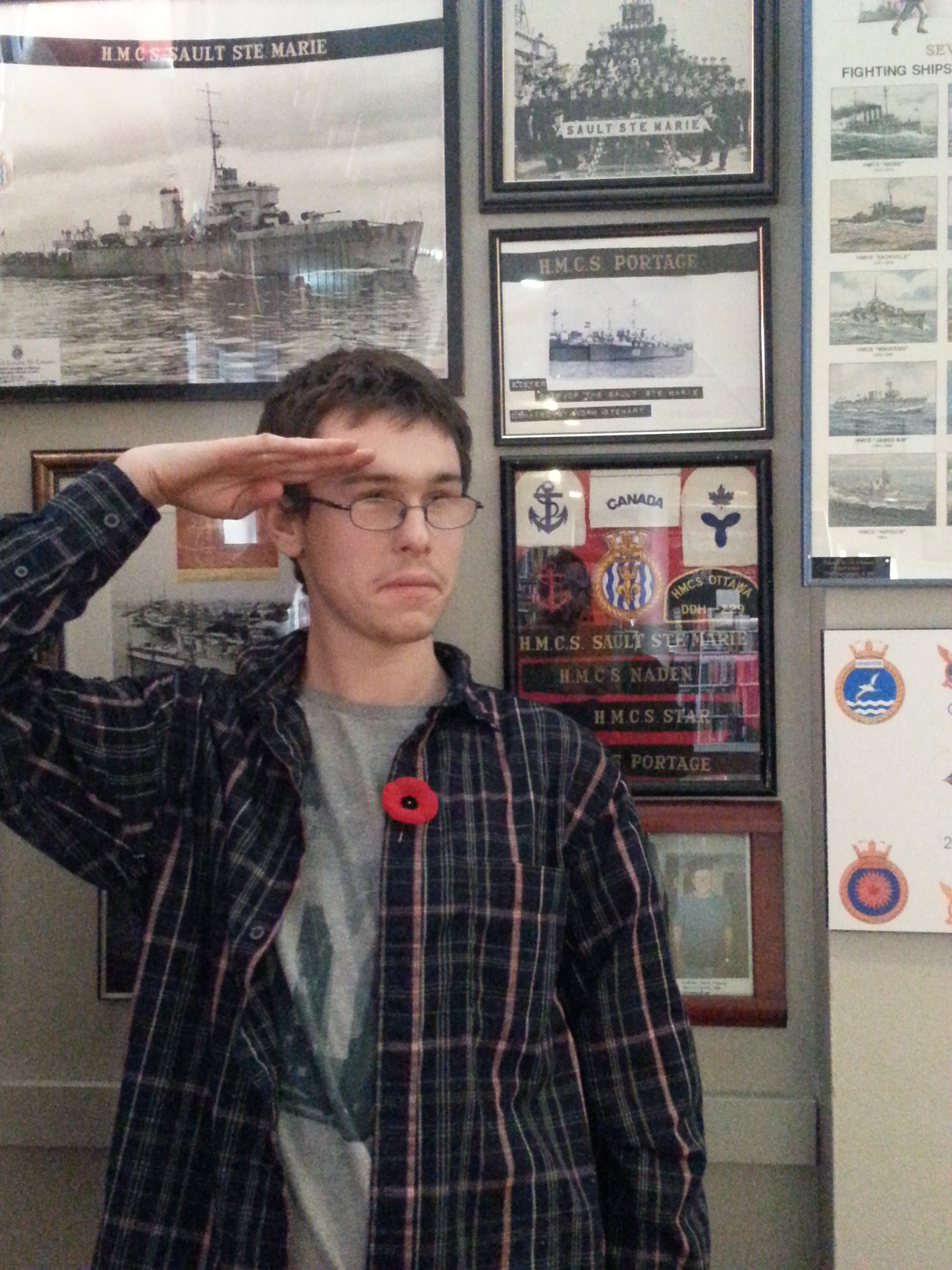 In The Legion lounge, I find a young man deep in thought, perusing the many glass showcases which house military medals. He is Joshua Chartrand, a student from Superior Heights High School. Josh and his grandfather, Mr. Bishop, make Branch 25 a part of their social life. Josh seems to be another historian and easily shares information contained within these medal showcases and the many photographs hanging throughout the large space of The Legion Lounge.

Joshs’ family history is ripe with legacies of men whose lives were dedicated and shaped by the Armed Services. One such story is of Roland (Rollie) Chartrand , grandfather,  who served on HMCS The Sault Ste.Marie, one of the many ships officially commissioned by The Canadian Navy during the Second World War. HMCS The Sault Ste. Marie was a mine sweeper. It was built in Port Arthur, Ontario (now Thunder Bay) and officially launched in June, 1942. The ship was commissioned in 1943 where it saw action in The Atlantic Ocean until being decommissioned in 1946. Another great-grandfather, Richard Bishop served aboard the Canadian Naval minesweeper The Swift Current, commissioned at Montreal, November 1941, during WW2. It is gratifying to see the interaction between grandfather and grandson in this place -Branch 25, Royal Canadian Legion. Mentor, teacher and student – the symbiotic relationship leading to a shared understanding of history.

When I leave the Legion, I am gratified in the knowledge that there are Joshs’ in the world – in this community, young people who are vessels for knowledge , seeking to understand the past ,  embrace their heritage, serve as beacons of pride,  continuing along a path which respects and honours their own history – a collective history that makes us proud Canadians.

Distinguished young people can be found within another group in our community – the 155 Pipes and Drum Air Cadet Corps. Both my late Uncle Dan Murray, who served as Commanding Officer, and my father David Trussler, who taught the Cadet Flying Scholarship Programme for many years, are woven into the rich legacy of our community. The 155 Air Cadets represent our community with honour and distinction. They are called upon to parade, to train, to compete across this province and country, and perform for various events. Most recently, members of the 155 Pipes & Drums enriched a worship service at Central United Church, Remembrance Sunday, November 9th, 2014. There are future leaders among us and they can be found in the Cadet programmes at local Armouries all across our Country.

I was fortunate to have been welcomed into the homes of two Veterans of World War 2.

Florence(Bartlett) Cavanaugh Riddell, born near St.Mary’s, in rural Ontario, enlisted into The Royal Naval Service , along with three of her friends.  In December 1941 the Canadian government passed the National Service Act which allowed the conscription of women into war work or the armed forces.  Women could choose to join the WRNS or its naval or air force equivalents, the ATS and the WAAF.

Florence and her friends chose the WRNS, although once training was completed, she and her friends became separated. Florence was only 18 yrs. old when she joined Royal Naval Service, and spent most of her time during WW2 in Halifax, Nova Scotia. She became part of a dedicated team of women who served their country in administrative ways, in a place affectionately referred to as “Torpedo School”.

“In Halifax harbour, commissioned ships would gather as part of a convoy of mine sweepers , troop carriers , aircraft carriers,” she shared. “In this busy space, we would provide support keeping information accurate and up-to-date- lists of personnel, enlisted men, who would be heading overseas on board these large vessels,” said Florence. “There were people coming and going all the time. Halifax harbour was a very busy hub of activity during The War.”

The WRNS reached its largest size in 1944, with 74,000 women doing over 200 different jobs. Three hundred and three WRENS were killed on wartime service. After the war the WRNS was made a permanent part of the Royal Navy but women did not serve in Royal Navy ships until the 1990’s.

Florence would go on to meet her husband, Jack Cavanaugh, during WW2. Florence was enjoying some well-deserved leave time, relaxing aboard a train when she met a young naval officer – Jack Cavanaugh. This chance encounter would eventually lead to a life of love , marriage and family and travel and adventure. To this day, Florence still loves to travel. I am struck by her adventurous spirit, and the courage it must have taken, at the age of 18, to leave the safety of rural Ontario, and join Canada’s armed services. I mean – wow.

After I left Florence’s home, I wondered if her eyes would have gazed upon  the name of my own Uncle, Daniel, on one of the lists to which she referred. Bright eyed and capable- getting ready to leave Halifax, on his way to England and places beyond, where he trained and served as a pilot in The Royal Canadian Air Force during WW2.

My next stop was to the home of Mr. Edward Penner. In 1942, Eddie felt the call of military service and chose the Air Force as the branch of armed services he most desired to learn. Out of a class of 125 training for service, Eddie became a Commissioned Officer, Air Gunner with the Royal Canadian Air Force. He would go on to become a Flight Lieutenant, serving in ‘hot ‘conflict regions  of  North Africa, Italy & Israel.

“Looking back, I don’t know how we made it out alive,” he said referring to several of the trips he and crew took in to conflict regions. He further shared, “You can’t imagine what it was like up there for the crew housed in the Boston A20 [a light aircraft].  We would follow the front lines, bombing enemy targets. Many times you couldn’t see through the chaos.”

He shared a story of when the navigator of the Boston A20 was  hit with a bullet while they were  airborne  over a hot conflict area  near Italy.   A tourniquet was applied and the injured navigator was eventually brought back to the relative safety of a military hospital.

I try to imagine the barrage of bullets streaking across the sky -hell bent on destruction of our Canadian boys. It must have been a nightmare. Eddie served as gunner in 65 bombing trips and would become part of the rich history of The Royal Canadian Air Force.

Eddie Penner would go on to meet his future wife while serving in the military. Eddie’s life in armed service would lead him to discover a young woman also in the armed services, and to a marriage of 58 years. After the war, Edward Penner would go on to graduate University of Saskatchewan with a Master’s of Science, eventually accepting a position with The National Research Council in Ottawa, Ontario.

Again I wondered about chance encounters, and the intricate ways lives become woven. Is it possible that he met my Uncle Dan while serving overseas?  Perhaps at an Officers Mess enjoying a nourishing meal, and the fellowship of colleagues?

Regardless of who we are, where we live in Canada, we are at least one thing – True North Strong and Free. Canadian. We’re a great country shaped by great stories of remarkable people – people who give, who sacrifice. People like John Wayne Faught, who died on January 16th,2010, serving with Canada’s  Princess Patricia  Light Infantry for 23 years. And Master Cpl. Scott Vernelli whose life was also taken on the battle field in Afghanistan, in  March 2009.

This Remembrance Day, November 11th, 2014, I trust that the Poppy Boxes will be heavy. Heavy as they make their way back to The Legion for tally – depleted of Poppies, worn with pride by a grateful community that line the streets, surround the cenotaph, and make their way to the Essar Centre – with heavy, grateful, hearts .