Trending
You are at:Home»Environment»Northern Ontario| Coming To a Town Near You? Nuclear Waste!
By Steffanie Petroni on May 27, 2015 Environment

If you live in Northern Ontario it may be coming to a town near you- NUCLEAR WASTE that is. But why here upon the most pristine landscape in Ontario? Why because Southern Ontario doesn’t want it of course! And let’s face it, when a bunch of slick business guys working for the Nuclear Waste Management Organization- owned by nuclear power entities, roll into town dangling 400,000 bucks in the collective face of a community all in exchange for just a lengthy conversation about nuclear waste storage, it’s pretty tough to show them to the door. 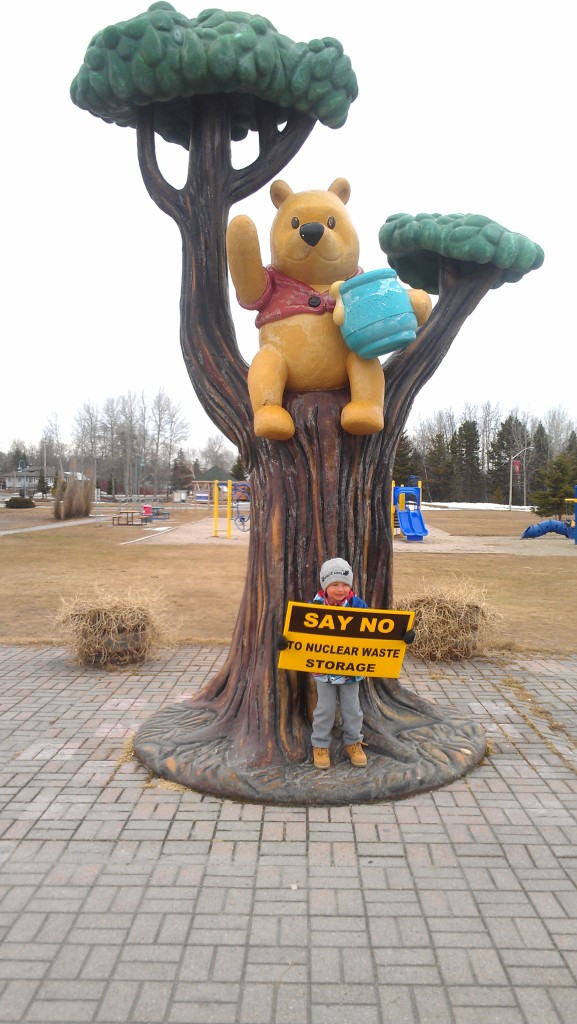 Young demonstrator gearing up for a protest against a proposed nuclear waste repository in Winnie-the-Pooh’s hometown of White River. The Town Council has chosen to participate in the site selection process but residents as well as those living on the nearby Pic Mobert First Nation reserve have spoken up in opposition to the nuclear waste facility. They are urging the Town of White River to withdraw from the process.

As White River’s Mayor, Angelo Bazzoni, admitted in an interview with the Northern Hoot this winter, “If the $400,000 wasn’t on the table it wouldn’t have been quite as appealing to us.”

White River is one of four communities cooperating with the NWMO in a selection process that could take several years to find a ‘willing host community’ to support an underground nuclear waste repository that would store up to 4.6 million bundles of irradiated nuclear waste 500 meters below the earth’s surface. Elliot Lake, Blind River and Manitouwadge are also participating in the site selection process.

Dr. Gordon Edwards’ extensive background is far too lengthy to reference. However, in 1961 he graduated from the University of Toronto with a Gold Medal in Mathematics and Physics, eventually going on to obtain his Ph.D. in Mathematics from Queen’s University. He has spent more than four decades educating the general public, scholars and industry experts about the concerns presented through the nuclear industry. Dr. Edwards also created the Canadian Coalition for Nuclear Responsibility in 1978.

This week Dr. Edwards was travelling through Sault Ste. Marie en route to White River and Pic Mobert First Nation where he will address citizens interested in acquiring scientific information about nuclear waste.

The NWMO has stated that the $400,000 offered to communities who agree to participate in the site selection process is not an inducement but rather an acknowledgment of gratitude for the leadership demonstrated by communities cooperating with the process. This money is earmarked only for community improvement- environmental initiatives, road improvements or perhaps recreational infrastructure. 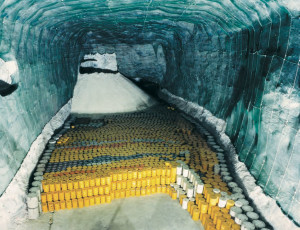 These are certainly great improvements for the community and Dr. Edwards would agree. However, he also expressed concern about what the provision does not allow for.

“There is nothing wrong with community improvement. But the NWMO should at least give that much or more, so that communities can educate themselves about nuclear waste in any way they see fit without the NWMO interfering. That would make things fair.”

Most people have a gut reaction when the topic of nuclear waste is brought up- and usually it’s to retch. It’s a pretty emotional subject and almost instinctual. In all likelihood it seems that people who are opposed to nuclear waste and the storage of it will formulate their decision based on emotion, information or both. But if a negative -or a positive, emotional reaction can procure the same outcome, what’s the big deal if an individual possesses knowledge that supports their decision?

*The nuclear power industry in Canada has produced 3 million bundles of nuclear fuel waste weighing over 50,000 tons. This amount is expected to double over the next 30 years.

*Fuel bundles are relatively safe before entering the nuclear reactor. Once the ‘spent’ or ‘irradiated’ bundles come out of the reactor they are highly radioactive. A 20 second exposure to the bundles will kill a person within two days.

*Spent bundles are put into wet storage for 10 years, to be continuously cooled to prevent overheating of bundles and the release of radioactivity into the environment. After a decade, bundles will be stored and moved into dry, cool storage for another 20 – 30 years.

*Today, nuclear waste is stored in robust containers that are incredibly durable. However, should a spill occur there is great risk to the environment and people.

*There are two types of nuclear energy created: Nuclear Fission- which can be controlled; and Radioactivity- which cannot be controlled. Radioactivity, and the inability to control it, is why the world has a nuclear waste problem- nobody knows how to shut it off.

*Nuclear energy can be attractive because one tiny uranium pellet can produce as much energy as a ton of coal and it doesn’t produce the CO2’s that occur when burning fossil fuels.

Are you asking yourself ‘what now’ yet? The information can be distressing. There aren’t any solutions that are easy though the NWMO and the nuclear industry would like to convince the politicians in Ottawa and at Queens Park otherwise. According to Dr. Edwards, small communities in Northern Ontario are targeted by the NWMO and nuclear waste producers as part of the ‘solution’.

“Their solution is to send nuclear waste up North and bury it in the geological formations there. End of problem. And that’s what they want. Without that they can’t continue to build nuclear reactors and produce more nuclear waste.”

“What’s the urgency to move it? As long as nuclear reactor sites are operating there will always be nuclear waste. If it is moved that means there are two locations where things can go wrong- where it’s being produced and cooled and where it’s being stored for the indefinite term. And then add to that the risk along the transportation route. Would moving the nuclear waste really be addressing the problem or would it be complicating the problem?”

In an article written by the Taipei Times, former US Nuclear Regulatory Commission chairman, Gregory Jaczko, stated that “that the future for nuclear power generation in the US and worldwide is one of “decreasing use and eventual phase-out.” Jaczko predicted that the use of nuclear energy in the US would come to an end in 2055.

If Jaczko’s predictions are accurate, and considering the longevity of radioactivity in nuclear waste, it really does seem hasty to spread highly radioactive material across the country. And for Sault Ste. Marie residents reading this- yes, it could be passing through your town too.

But if the idea of hosting radioactive material through and in your community still hasn’t rung your alarm bells yet the possibility of reprocessing nuclear waste might.

Reprocessing nuclear waste is an important profit margin for the nuclear industry. There are two types of nuclear waste produced- solid and liquid. The lucky site selected in Northern Ontario would be storing solid nuclear waste in an underground repository. But hold on to your knickers! There’s gold in them thar spent nuclear waste bundles!

“Solid nuclear waste can be reprocessed into a liquid form. The liquid form of nuclear waste is used for weapons. Reprocessing, or liquefying nuclear waste, is a very messy and a very polluting process. This is done to derive the valuable plutonium material from the waste.”

Why is the potential to ‘reprocess’  nuclear waste so important for communities -flirting with the idea of becoming host sites for nuclear waste, to know about?

Dr. Edwards will tell you. “The nuclear industry will liquefy solid nuclear waste wherever that waste is. If the waste is moved to an underground repository that’s where reprocessing will happen. The NWMO will say there is no economic benefit to doing this now and that they don’t plan to do this. However, people in the industry are very eager to do this. I believe it will happen because the nuclear industry wants to survive. And if wants to survive it will need plutonium.”

Are you looking for part two of Dr. Edwards proposed action for dealing with nuclear waste?

Someday in the future- could Radioactive Man save us from our nuclear waste?

Well, it’s called ‘rolling stewardship.’ In addition to keeping the nuclear waste where it is, and keeping those barrels bursting with radioactivity in sight by storing it above ground, Dr. Edwards puts forward the idea of fessing up about our ugly legacy to the next generation- instead of burying it. The concept entails a process where every 20 years or so, a public conversation is facilitated with the next generation of ‘nuclear waste keepers’.

“We don’t have a solution for nuclear waste right now. Hopefully, over the centuries things would improve and later people will be smarter. They will learn more things and they’ll be able to handle it better than we are able to do today. And at some point in the future someone may be able to figure out how to truly get rid of it,” ruminated Dr. Edwards. “The important thing now is to not abandon it – to keep an eye on it. I’m leery about the nuclear industry’s reason for burying it –because that would make it easier to abandon. The whole idea of burial is based on the idea that nature will recycle it. That the material will become transformed and become nutrients for other creatures. Well, that’s exactly what we don’t want to happen with nuclear waste.”

He chuckled and then said, “Just to give you a crazy off the wall suggestion- if you watch Star Trek they have transporter booths- well if you could beam this stuff into the sun we could get rid of it. But we don’t know how to do that. And we can’t do that by rocket today. We have so many rockets that go up and crash. If that happened it would be the worst of all possible worlds.”

Who knows? Maybe one day. If anything history has demonstrated that if we can imagine it, we can create it.

A frightening thought, but a fascinating possibility too.