Following the ruling of manslaughter and the sentencing of Ronald Mitchell, Eric Mearow and Dylan Jocko in Wesley Hallam’s horrific murder and dismemberment in January 2011, the mother of Wesley, Sandra Hallam, and Sault Ste. Marie Chief of Police, Bob Keetch, issued formal statements to the public.

Keetch was diplomatic as he articulated his concern with the local Crown Office’s behaviour that entailed a secretive plea bargain which whittled charges of First Degree Murder all the way down to a Manslaughter charge with flimsy terms attached.

And to add insult to injury, the Sault Ste. Marie Police Department had to learn about the copped plea from the accused men. Officers transporting the three men back and forth between the jail and Court overheard their chatter about the plea bargain and alerted Deputy Chief, Sean Sparling, to the information. Sparling initiated discussions with the local Crown and regional Crown. It was upon confirming the details of the plea that the police insisted to the Crown that the family be notified of the decision. Though the plea was struck back in April 2016, the Crown did not notify the family of the decision until July 15th – and did so only upon the instance of the Deputy Chief.

Chief Keetch expressed specific concerns with the events that led to the plea bargain. “There are two aspects that concern me. First, is the process of negotiating a plea agreement to a Crown office. Outside Crowns were involved to review the case, which was done well in advance of the plea, but any members of the investigative officers on the case were not involved. That concerns me. These are the officers that know the case, know the frailties and know the witnesses the best. They were excluded. Second- I’ve had time to reflect on the Agreed Statement of Facts and there is certainly evidence that was presented in the court that didn’t necessarily reflect the true crime that was committed in relation to the murder of Mr. Hallam.”

An Agreed Statement of Facts does not contain all of the evidence that is gathered and presented throughout the preliminary hearing process.

Chief Keetch has spoken in length with the Ministry of Safety and Correctional Services and the Ministry of the Attorney General – as well as the local Crown office. “The relationship between the Crown Attorney and this police service has been identified as an issue,” remarked Keetch adding, “Both the Crown Attorney, Kelly Weeks, and I have committed to attempt to fix this.”

Keetch also commented that a third party review of this matter would not be precedent setting but such reviews are not commonplace.

Chief Keetch, who was present for the entire courtroom proceeding on Thursday, acknowledged the high emotions expressed in the courtroom on the heels of the judges light sentencing of the three men who murdered and dismembered Wesley of his head, feet and hands. All three will be released back into the community in a couple of years.

“There is genuine concern from a community perspective for the potential risk that these individuals will present to our community when they are ultimately released from custody. That will be the responsibility of us as a police service to attempt to minimize, mitigate and manage that risk.”

Below are the public statements issued by Sandra Hallam and Chief Keetch from the Sault Ste. Marie Police office on Thursday evening. 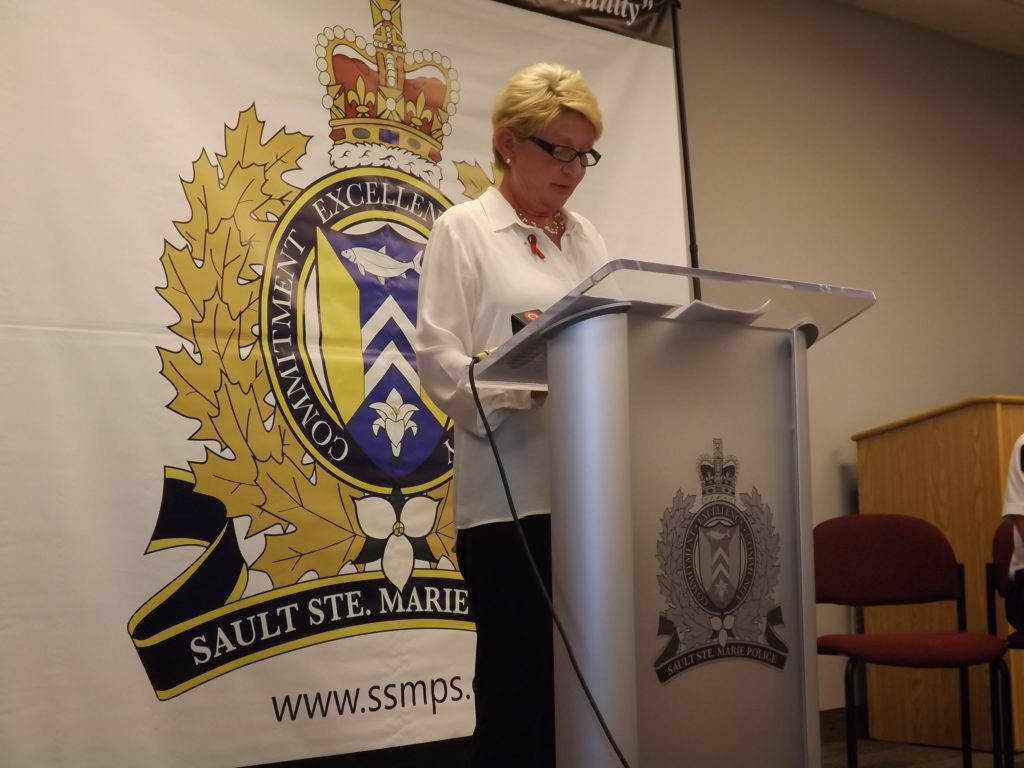 Good evening, I want to first say that today should be a happy day for my family. However we are devastated. We should be happy that the people responsible for murdering my son were convicted of a crime. But we are far from happy.

I would like to thank the Sault Ste. Marie Police and the OPP for all their hard work and time they put into my son’s case. It is no reflection on them that an injustice has occurred today. I am horrified that these three men will walk back into our community sometime soon. I think the City of Sault Ste. Marie should be afraid. These men committed murder and will soon walk free while my son’s friends and we the family have received a true life sentence.

I struggle to make sense of the Crown’s decision to accept a plea deal. I feel horrified that it is at the expense of my son’s life and my family’s lives.

Thank you to all who have shown us support. We the family would now like some time to heal because this five and a half year journey has been exhausting for all of us. 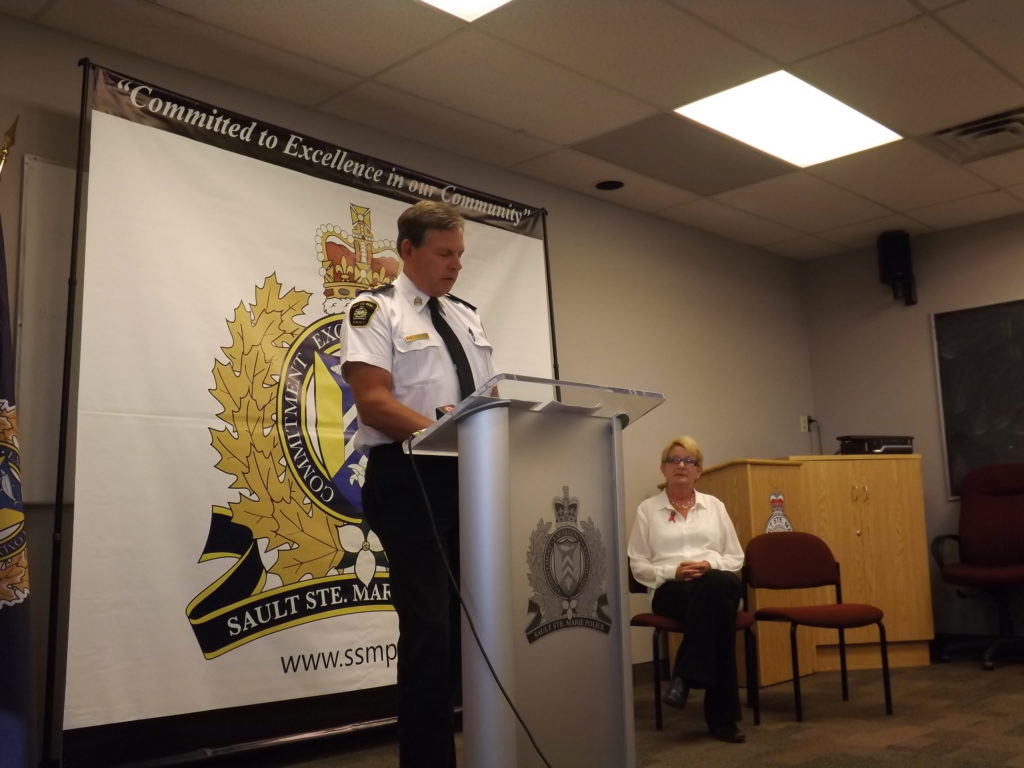 Earlier today, charges against Ronald Mitchell, Dylan Jocko and Eric Mearow, the accused parties involved in the gruesome murder of Wesley Hallam, were presented before the courts. They plead guilty to manslaughter and offering an indignity to a human body. The proceedings brought concluding judgements to one of the most horrific crimes ever committed within this community.

First, I want to extend condolences to the Hallam family on behalf of the members of the Police Service. I can’t even imagine the mental pain and suffering you have endured throughout this process. Nobody should lose a loved one under such circumstances. The manner in which Wesley’s life ended, and the indignities he suffered, was disturbing to us all, to say the least.

Now that this matter is concluded, I hope that you –Sandra, and your family can finally have some peace heal and somehow find a way to put this horrendous crime behind you. We will continue to support you as long as you need us.

Next, I would like to convey that we, as a Police Service, are as disappointed with today’s outcome as is the Hallam family.

To the people of Sault Ste. Marie, I wish to stress that we take our responsibility for community safety and well-being, and our role in investigating crimes that occur within this community very seriously. The results of this case in no way reflects the work done by Police.

The Sault Ste. Marie Police Service and the Ontario Provincial Police; who jointly investigated the Hallam homicide, committed significant resources (both manpower and financial) to conduct a thorough and competent investigation. Approximately 200 officers were involved, over 200 witnesses were interviewed, and a crown brief in excess of 90,000 pages was compiled; all to support First-Degree murder charges. I would like to publically recognize the tremendous work which was conducted by all (officers and civilians) assigned to this case. Your compassion, commitment and dedication have not gone unnoticed and are not properly reflected in a conviction for manslaughter. To all the witnesses who had the courage to come forward, provide testimony and participate in the judicial proceedings, thank you. I know this has taken courage and been a difficult process for you.

Throughout the entire investigation, preliminary inquiry and pre-trial motions, members of the Sault Ste. Marie Police Service and our Local Crown Attorney’s Office maintained a well-established, effective and valued relationship which was based on mutual respect and a shared responsibility for a thorough investigation and prosecution in the Hallam murder. The Sault Ste. Marie Police Service was committed to the upcoming trial of all three accused, and prepared to dedicate significant resources to support it.

However, once a criminal charge is laid and the matter is before the courts, it becomes the responsibility of the Ministry of the Attorney General. We were not aware of any discussions regarding a proposed resolution or a reduction of charges for the Hallam homicide, nor did we have any input.

Again, today brought a conclusion to one of the most sensational and horrific cases in Sault Ste. Marie’s history, and regrettably, a disappointing one. Any questions regarding the convictions should be directed to representatives of the Ministry of the Attorney General.