Last week, Ontario’s Divisional Court upheld a ruling, challenged by Ontario Nature and Wildlands League, which removes two core provisions from the Endangered Species Act. Lara Tessaro, lawyer with Ecojustice, stated of the decision, “It takes out the heart of what the Act is.” 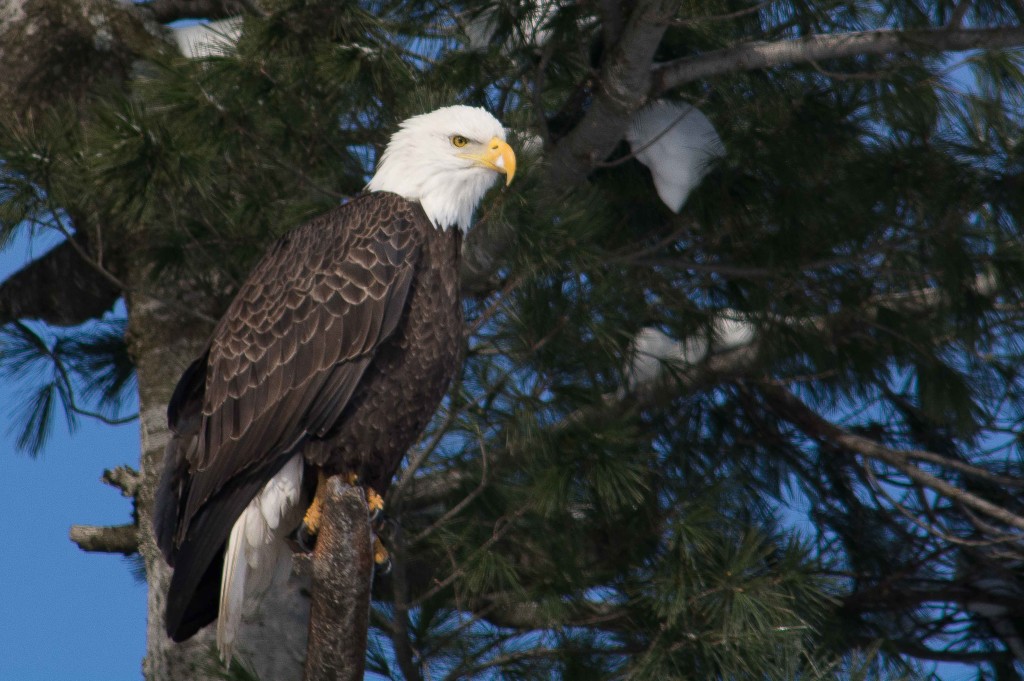 Photo by Ron Gallagher. The Bald Eagle was already assessed as a species of special concern when the Endangered Species Act took effect in 2008.

However, the regulations may exempt myriad industry and developments. “People engaging in all kinds of harmful activities have been exempted – not just giant mines, but even early mining exploration which people consider a less major development. But from a species survival situation that isn’t always the case. An urban housing development, for example, can be just as devastating to their survival as a mine,” remarked Tessaro.

The ruling provides that industry is required to meet some standard of conditions but Tessaro argues that the criteria works to a lower standard of protection.

“Mining activities are accepted if steps are taken to lessen the amount of killing and habitat destruction caused by the industry,” she explained. “Prior to the regulation, industries would have to prove that even though they might be causing some harm to the species that the activity would have an overall benefit to the species. Now all the company has to do is show that they are lessening the harm to that endangered species. We argued that it undermined what the purpose of the Act is about, which is not to do with lessening the harm to endangered species, but protecting them. The Court did not agree.”

When it was established in 2007, the Endangered Species Act was lauded as the ‘Gold’ standard for its’ protection of endangered species as well as for the flexibility it afforded for development.

Caroline Schultz is the executive director with Ontario Nature.

“In our view the regulation actually undermined the intent of the Act to protect and recover species at risk,” she remarked. “Having legal protection for endangered species is paramount. The Act was all about balancing and being able to proceed with certain activities but also making sure that there was compensatory action taken so that the species was better off. This Act, prior to the regulation, provided a lot of opportunity to work out solutions.”

Over the past five years Schultz, as well as various conservation entities, observed a gradual slide away from the government’s commitment to the Act. Schultz offered her thoughts about why this may have occurred.

“There wasn’t enough dialogue with partners and stakeholders about innovative ways to implement the Act. I think the government made a big problem for itself with the way it was implementing and then decided that everything was way too expensive and cumbersome. That’s why they attempted to pull back and they tried to do that by gutting much of what the Act provided for.”

Schultz expressed concern regarding the fate of all endangered species but specifically spoke about the threat to Ontario’s six herds of caribou.

“Unless forestry industries are required to reduce their ecological footprint we know that the woodland caribou will decline. Unfortunately now with the regulations we have in place, the Endangered Species Act is of no help in reducing that footprint,” remarked Schultz.

According to Schultz, the habitat of two woodland caribou herds overlap with industrial forest operations. Government research shows that these two herds will not survive. As for the remaining four herds- their survival rate is 50/50.

“Without the intervention of the Endangered Species Act that actually requires Forestry to operate in a way that won’t affect caribou- those odds are pretty poor. Over a century, caribou habitat has shrunk northwards with forest activity. We do believe that forestry and caribou can exist but it means large protected areas and not going in to critical caribou habitat. What’s working now for forestry isn’t working for the caribou.”

So why the ongoing match between environment and industry?

“It’s not wanting to change practices and fearing that changes are going to affect the bottom line,” mused Schultz. “But the entire jobs versus environment thing is really just a red herring. It’s very clear that the two can co-exist provided we have something like the Endangered Species Act where there is a provision of mechanisms that provide flexibility for both.” 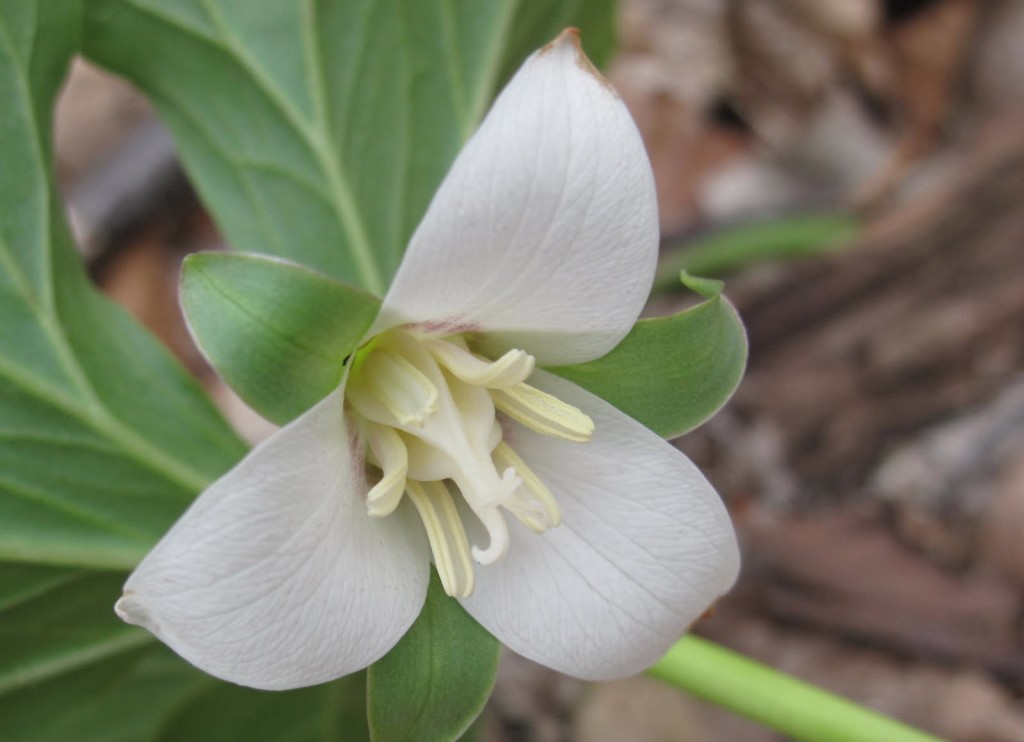 Dropping Trillium. In Canada, Drooping Trillium only grows in southwestern Ontario in the warmer climate of the Carolinian forest. There were once six known locations in the province, but today there are only two. A total of 1465 flower stems were reported in 2007. (Ontario.ca)

Schultz challenges that different industry models need to be considered regarding economic and employment gains that can be drawn from the natural environment.

“The jobs versus environment thing really gets amped up in the North. The North is traditionally a resource extraction based economy. We need to look at a range of economic activities that are still resource based but done in a different way. There are many more opportunities in terms of livelihood that can be derived from the forest other than the traditional approach to forest management. One of the projects Ontario Nature is working on is a Forest and Fresh Water Food program. We’re engaging communities and First Nations in the North to look at the economic potential of harvesting forest products that aren’t timber.”

Tessaro put forward that provisions provided in the Endangered Species Act creates an even stronger economy.

Ontario Nature and Wildlands League are considering next steps. The two groups have until June 12th to put forward a request to appeal before the Ontario Court of Appeal.

TORONTO — Ontario’s Divisional Court has upheld a provincial regulation that exempts major industries from the Endangered Species Act and allows them to kill species at risk and destroy their habitat.

“This is a disappointing decision for Ontario’s endangered and threatened wildlife,” said Ecojustice lawyer Lara Tessaro. “The Endangered Species Act is intended to put species first — not to let their survival be balanced against competing industrial interests. That would tip the scale towards extinction.”

When it was introduced in 2007, the Endangered Species Act was considered the gold standard law for species protection in North America. Unfortunately, recent years have seen Ontario shirk its duties to protect at-risk wildlife.

In 2013, the province introduced a regulation that exempts major industries from strict protection standards under the Endangered Species Act — in many cases giving them a free pass to kill endangered or threatened species and destroy their habitat, as long as this harm is “minimized.” To challenge this regulation, Ontario Nature and Wildlands League, represented by Ecojustice lawyers, brought a lawsuit that culminated in a hearing earlier this year.

“There are too many plants and animals that are teetering on the edge in this province,” said Anna Baggio of Wildlands League. “We will continue to speak up for them until their habitat is protected and until they are no longer at risk of extinction.”

Some of Ontario’s 155 at-risk species threatened by the regulation include the American Eel, Blanding’s Turtle, Lakeside Daisy, Jefferson Salamander, Eastern Meadowlark, and the iconic Woodland Caribou.

“In the past 40 years, the earth has lost over half of its wildlife,” said Caroline Schultz. “Today’s ruling certainly won’t help the situation. The prospects for Ontario’s most vulnerable plants and animals just got a whole lot bleaker.”

The groups are reviewing the decision and considering their options.