Trending
You are at:Home»Northern Voices»Love to the End, and Ever After: A Local Memoir on Death, Sickness and Recovery.
By Steffanie Petroni on May 2, 2017 Northern Voices

If you haven’t experienced it yet, you will. ‘It’ is the stuff of life that tests the limits of our mettle –sickness, loss, and grief. We know it’s something we’ll eventually have to confront, but we ignore that lurking, shadowy figure until it rages up our driveway and bursts through our front door. Catherine Tosello-Rocca was 33 years old, the mother of two beautiful little boys, married to a loving husband and carrying their first child when life came to collect. 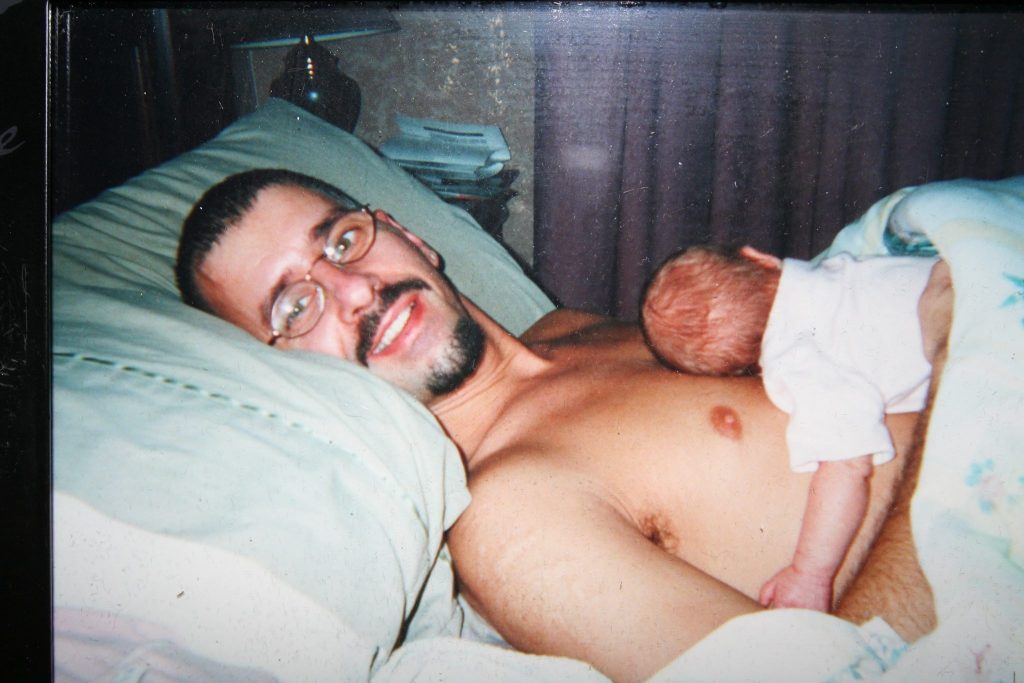 Mario with his and Catherine’s daughter.

In 2001, Catherine’s husband, Mario Tosello, was diagnosed with brain cancer. Six weeks later, holding his 4 week old daughter and with Catherine by his side, Mario passed away. Time would pass but Catherine, a very young widow with three children and a full-time career, floated across the years, feeling lost in her grief and lonely in her widowhood. In 2012, with her feet beneath her and upon the earth, Catherine met the second love of her life, Joe Rocca. They married, laid out their plans for happily ever after but cancer came calling again, this time for Joe. And Catherine was shattered, unable to fathom how twice in her lifetime she found true love, and how twice her loves would be summoned to fight cancer in an ultimate showdown. Joe survived his frightening ordeal with cancer, and Catherine was reflective. 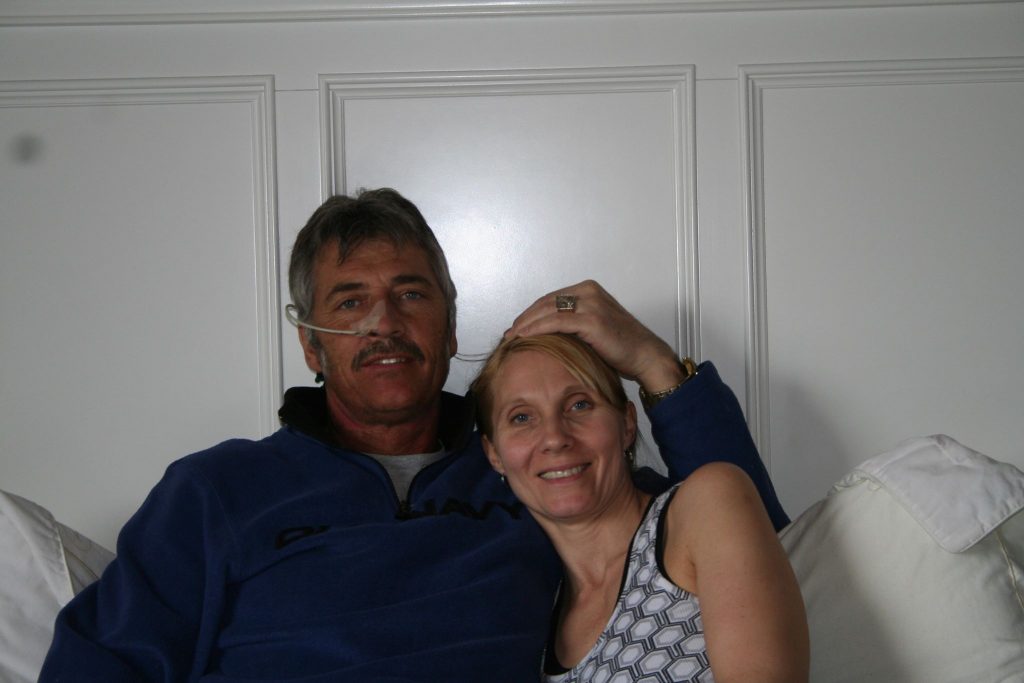 Joe and Catherine during recovery.

Marveling over her unique experience to have supported two husbands- one to his passing, and the other through sickness and on to recovery, Catherine felt compelled to share her story in the hopes of offering some support, some ‘right’ words, and some relevant insight to other young women, as well as men and those of all ages, as they take on perhaps their greatest challenge yet.

Of her book, Push: A Partner’s Perspective on Sickness, Death and Recovery, Catherine expressed that her goal was to create an intimate conversation with the reader and to also write a book that did not demand academic levels of concentration.

“I needed something more than a family member coming to check on me, a friend coming to help with the laundry -I loved all of that,” Catherine paused. “I needed another widow. I needed that. And I needed something easy to read. So as I was writing this book, I empathized with that –I went back. When you are going through grief and when you are supporting a loved one that is ill you don’t have time to read, you’re not going to sit down and read a book. Focus is gone.”

Recalling the time spent in hospital and doctor offices during Mario’s and Joe’s many appointments and treatments, Catherine remembers the agony found in waiting rooms.

“Joe would go in for a radiation treatment- I couldn’t go in with him. So what did I do? I’d sit there and count specs on the floor and pretend to not look at somebody directly in front of me who is almost in tears. I pretend. You kind of look down …and there’s a little kid that has no hair and the mother is sitting beside this kid. And there’s like a Chatelaine, a People’s magazine, and a Macleans. What the hell? I’m suffering here. I’m suffering. And not only am I suffering in this waiting room because I love this person that’s being taken away to whatever it is- chemo, radiation, but I’m also trying to be the best actress I can be. And everybody in the waiting room is pretending. So yeah- I want somebody to say ‘I’ll pick up this book, because I can’t keep counting specs. And I’m not going to pick up a Macleans’.”

Composed of a prologue and two chapters- one on widowhood, and the second on illness and recovery, reading Push feels like having a cup of coffee with Catherine. Each chapter features 10 tips that Catherine pulled from her emotional toolbox. She began writing the book while her second husband was in the recovery stages of his successful battle, but completing the book would take five years and a courageous re-visitation of painful memories.

“I had been journaling for years. And as I was going through my old journals…,” Catherine drops her shoulders and puts her hand over her sinking chest. “…that was painful reliving what happened to Mario. I could remember what Mario went through and recognize what was happening with Joe. But experiencing recovery with Joe was so new to me. I wrote Joe’s chapter first and then I wrote the piece on widowhood. I wanted to keep it to 10 tips for each chapter. There’s so much to offer but you can’t bombard people with information.”

Catherine cautiously edited out portions of her book that were too “raw” for her supportive memoir. What she did not include in her book was how devastated she was when Joe became ill. She wasn’t ready to swing into battle, she wanted to fall apart, she admitted, “for about three days”.

“I collapsed. It was so bad. I didn’t collapse in front of him, I just hugged him and told him we would get through it together. I collapsed after. I kept thinking, ‘it’s my fault. What have I done? Am I a black widow?’ I have only been in true love and healthy love twice in my life. So when my second love got sick I was questioning myself and I didn’t want to be around him –initially, for a few days. I didn’t know if I was thinking realistically. I could tell I wasn’t thinking clearly. I walked into my doctor’s office without an appointment and I said, ‘my husband has cancer. Could it be my fault?’ I thought there was something about me- when Joe got cancer. And I thought ‘I knew I shouldn’t have loved again. Look what happened…” And I needed that doctor to say ‘no. You can’t cause cancer.’ And that’s when I realized ‘stop it. This isn’t about me. This is about Joe right now’.” 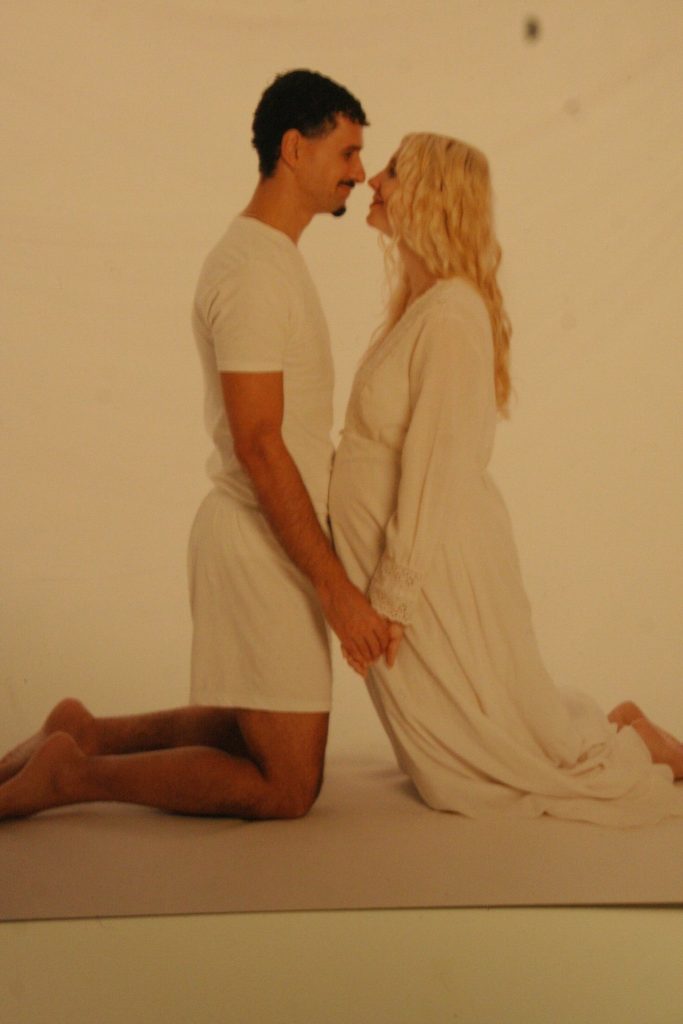 Mario and Catherine while still pregnant with their daughter.

Though Catherine’s work is from the perspective of a widow, and then of a wife supporting her second husband through his cancer fight, there are many universally relatable points in her book.

First, we all face loss or eventually will and we’ll likely love someone that gets sick. In this way the book reads as a cautionary to someone who isn’t there yet. And second, several of Catherine’s tips, though learned through widowhood and cancer, have broad application –especially the section in the widowhood chapter that addresses ‘filling the void’ or rather ‘not’ filling the void.

“I thought that when I was writing about the void that a lot of people would relate to it. We’ve all been there –maybe it’s a void caused by losing a partner to death or maybe it’s a divorce, the loss of a job,” remarked Catherine who added that particular section required her to get comfortable with her vulnerability. “But I wrote about it because I know with this population that it’s going to hit a chord with someone. These are things people don’t want to talk about. So let’s discuss that because you know what? It happened to me. I wanted to fill the void. Nothing made it heal as much as I tried.”

Catherine admits that as a young widow there were times when she felt like she was spiraling out of control. “I made a lot of mistakes in widowhood,” she said thoughtfully. 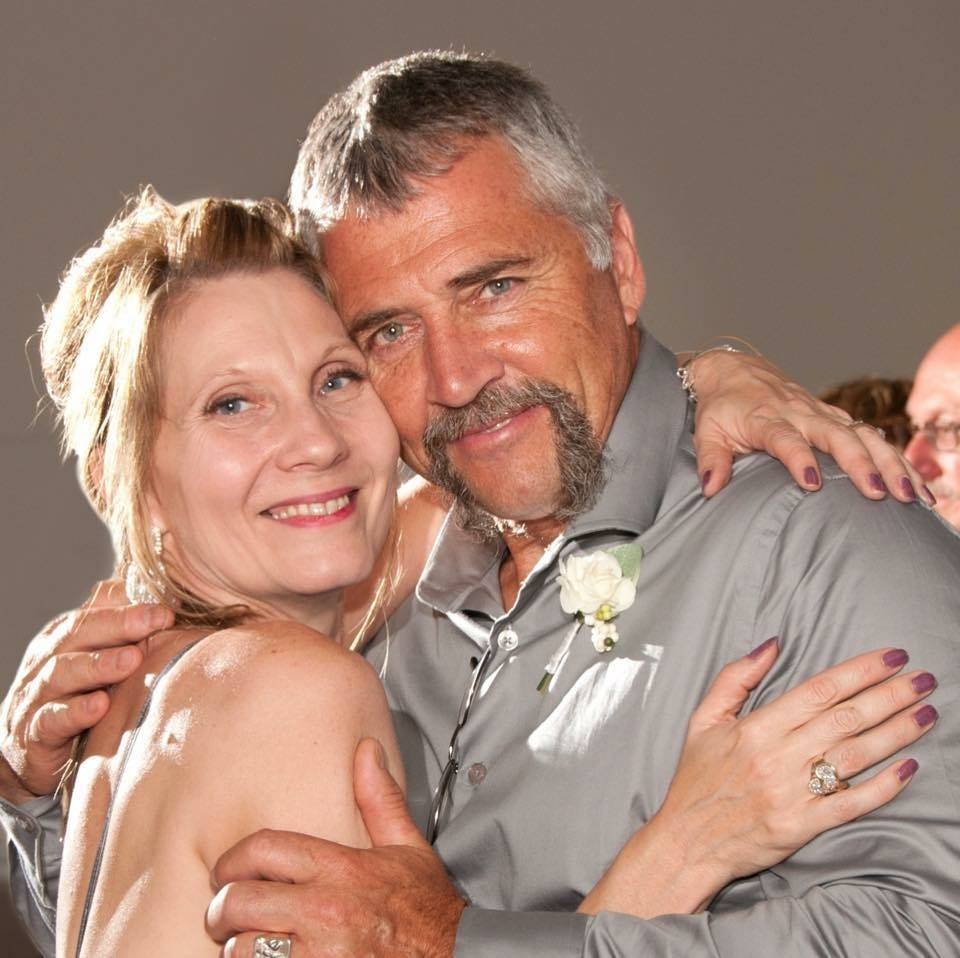 But Catherine named her book Push because it is a mantra that has gotten her through the hard times life tosses her way.

“As soon as I start feeling like I’m done, like I’m too tired I’ll tell myself to keep pushing. And when I was going through the process with both of my husbands it felt like I was pushing. You need to push. And it’s not just through grief or supporting a partner. Whatever your muck is- stress, divorce, loss of a job or friendship, push through and get out.”

It was a significant moment for Catherine when a few weeks ago she was able to deliver a book to the Northeast Cancer Centre in Sudbury where she spent much of her time in the waiting room. “I got it there- and that felt like an accomplishment. And before that I sat in the waiting rooms at the Sault Area Hospital and at the St. Joseph Medical Centre. I sat in so many waiting rooms. And now, everything else is gravy if it gets out there.”

Catherine’s book, a quick read -40 minutes to an hour, captures the full spectrum of life. As her dear husband Mario begins to slip away, their daughter is born. Catherine is painfully honest about these first years of grief as she tries to hold herself together, to maintain the needs of three young children –getting up every day, keeping a full-time job, and celebrating milestones. Then she finally emerges from the darkest of places, finds true love again but her hard won peace is fleeting when her second husband receives his diagnosis and yet another fight for life begins. This time there is victory and the recovery process that both Joe and Catherine share.

Catherine reflects the wisdom that was hard to come by when she says, “How blessed can one person be? It is a blessing to have the opportunity to have loved that deeply –true, healthy love. And to have lost a true love like that but find it again? To meet another? I’m truly blessed for that.”

Those interested in acquiring a copy of Push: A Partner’s Perspective on Sickness, Death and Recovery can check out Amazon or Barnes & Noble. To contact Catherine email ctos@live.ca or call 705.971.3928.