Trending
You are at:Home»Environment»Lake Superior’s Ice Caves: A Thing of the Past?
By Meaghan Kent on February 24, 2016 Environment 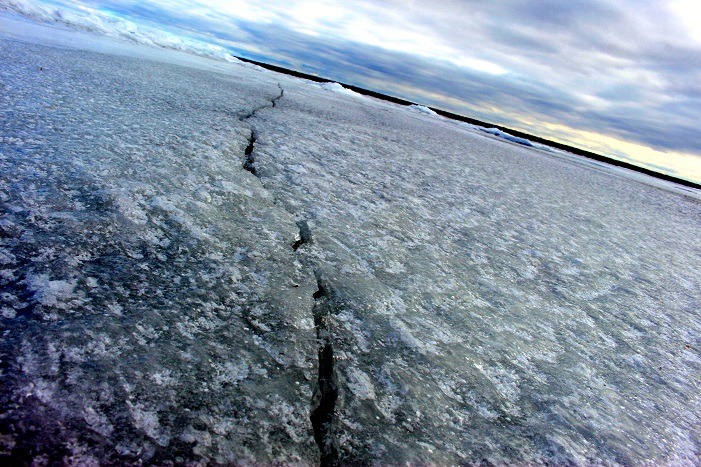 For many Northern Ontarians, the 2015-16 winter has been a welcomed treat. Milder temperatures and less snow accumulation have allowed for less back-breaking work shoveling driveways and walkways while risking frostbite to appendages. For tourism, however, the milder climate has presented its challenges. Downhill and cross-country ski trails along with snowmobile federation trails have been plagued with poor conditions and late season openings. Plus, those who have migrated north get a glimpse of the unreal ice conditions that highlighted the newsreels over the past three years have been disappointed. 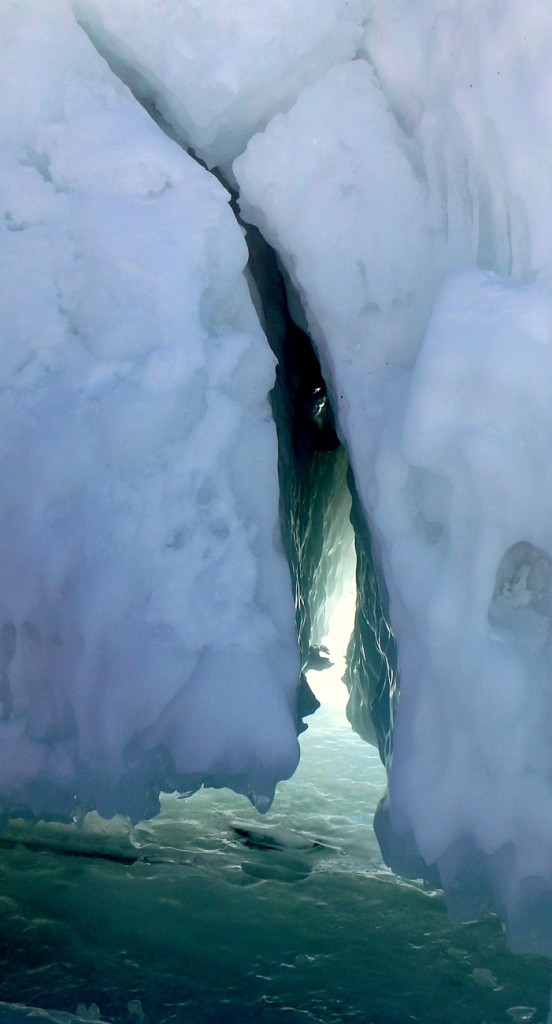 From 2013 – 2015, the winters have been bone-chillingly cold, with the mercury plummeting into the -20 degrees Celsius on average, and wind chill values threatening into the -40s. While these temperatures were normative in the 1960s – 1980s, they had become a thing of the past due to climate change and global warming. But in 2013 through to 2015, Canadians and those in cities sharing a border with the True North Strong and Free became accustomed to the “polar vortex”, a term coined in 1853, which represents a pocket of extreme polar air, rushing in from the Arctic Circle or Northern Hemisphere, and remaining for an extended period of time. In 2014, polar vortex became one of the most widely-used phrases to describe the freezing chill which afflicted the majority of North America from December to March.

Coinciding with the polar vortex came the extreme deep freeze of the Great Lakes. A typical Canadian winter brings 30 to 40 per cent ice coverage of the freshwater lakes. As of 6 March 2014, 80 to 90 per cent of the Great Lakes were covered in crystalline glass, the second most ice coverage recorded in history. Lake Superior was 95 per cent engulfed in ice, with ice thickness averaging 22.6 centimetres, with some places well over 50 centimetres thick. Only once since 1973, when record keeping began on ice flow levels on the Great Lakes, has Lake Superior been frozen solid, and that was the great freeze of 1978 – 1979. Plus, ice formed on Lake Superior in November, almost an entire month earlier than it had ever done before. The shipping of goods and cargo came to a grinding halt, as 70 freighters were trapped, lodged in deep ice flows on mighty Superior, awaiting Coast Guard and ice breaker rescue in order to be freed to traverse across the lake. In April 2015, the situation on the Great Lakes was much the same; 18 freighters became stuck along Whitefish Bay in the Upper Peninsula. Outdoor recreational stores also became outfitted with special electrical extensions for fishing augers in order for fishermen to penetrate through the recording breaking ice levels. 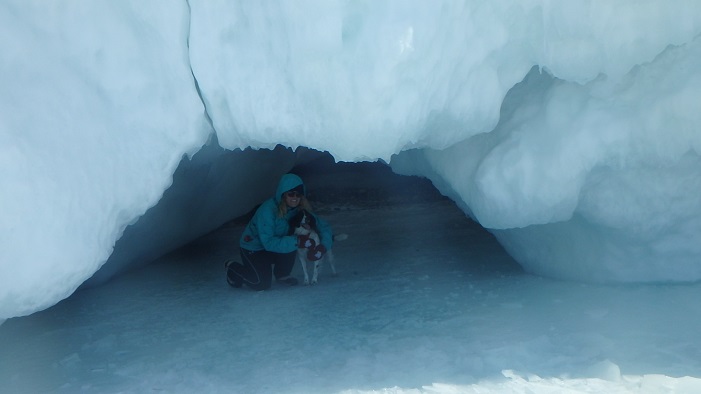 For those who braved the frigid temperatures on Lake Superior and extreme wind gusts, they were rewarded heavily with beautiful, naturally made caverns shaped out of ice. Irregular in size, shape, and statue, much like a snowflake, no two ice caves are ever the same. Some are large, big enough to stand up inside and exposing great depths, others are much shallower. Some are made entirely out of frozen water, while others are created by a combination of ice and snow.

Ice caves begin to form early in the winter season, once the temperature drops below freezing for longer than 24 hours, creating primary ice. These caverns are formed by waves and surf crashing against rocks in sub-zero temperatures. As the temperature continues to plummet, secondary ice is formed at a much quicker rate, creating jarring obstructions and irregular shapes. Before the water freezes over completely, waves continue to punish the ice formation, creating impressions or cavities, forming the highly sought after ice caves. And when Lake Superior can boast six metre tall waves, ice formation can reach unsurpassed heights not seen elsewhere. 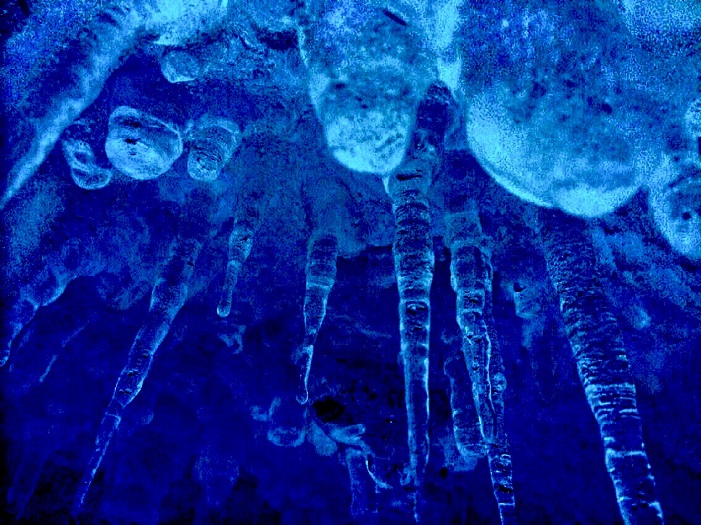 Even once the water freezes over entirely, ice caves are not finished their tremendous creation process. Currents flowing beneath the ice as well as gruelling winds will continuously shape, shift, and polish caves. Currents will also create large fault lines and cracks that will separate, similar to how the earth’s tectonic plates are manipulated. Caves that are in direct sun will also experiencing warming and cooling throughout the day and evening, which often produces large protruding cones or icicles inside. Some are brittle while others are jagged and obtuse.

These caves lined the majority of the rugged shoreline of Lake Superior in 2014. Crevices, caverns, and large faults were noted from Pancake Bay to Sawpit Bay, at both Mica and Alona Bay, though none were more famous for Northern Ontarians than those at Old Woman Bay in Lake Superior Provincial Park, 20 minutes south of Wawa. For the first time in over three decades, the famous tumultuous bay, known for its breathtaking views, extreme undertow, and remarkable waves, froze solid. Adventure seekers and fishermen could walk out on the ice, rounding past the 200 metre high cliffs that portray an old woman’s face. People could see what they had never seen before – new angles, new cliffs, and caves hiding in the rock mountain. While exploring this never-before-seen territory, a range of ice caves were discovered, over two kilometres long, which locals referred to as the Blue Ice Phenomenon. 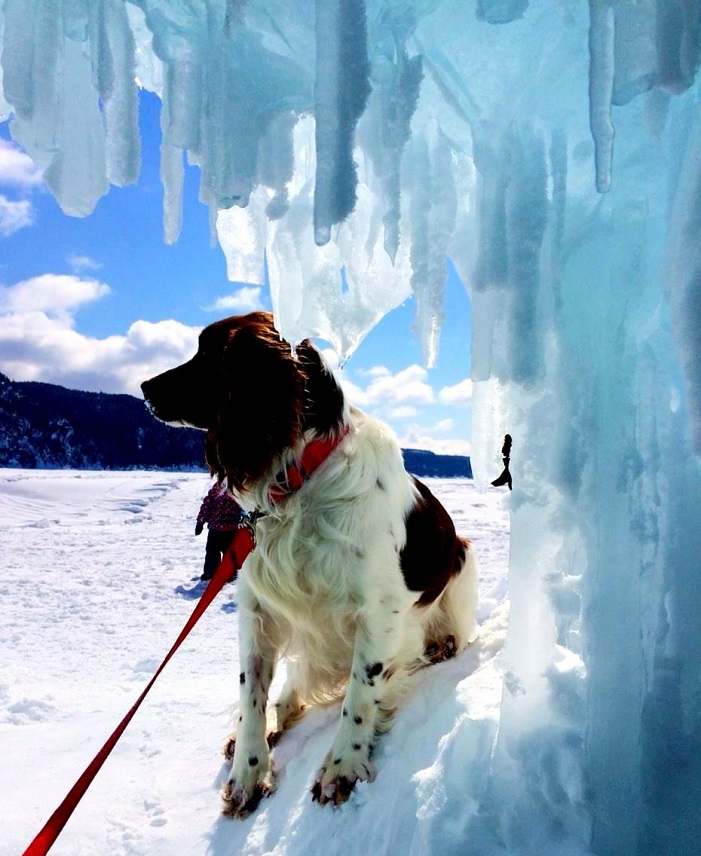 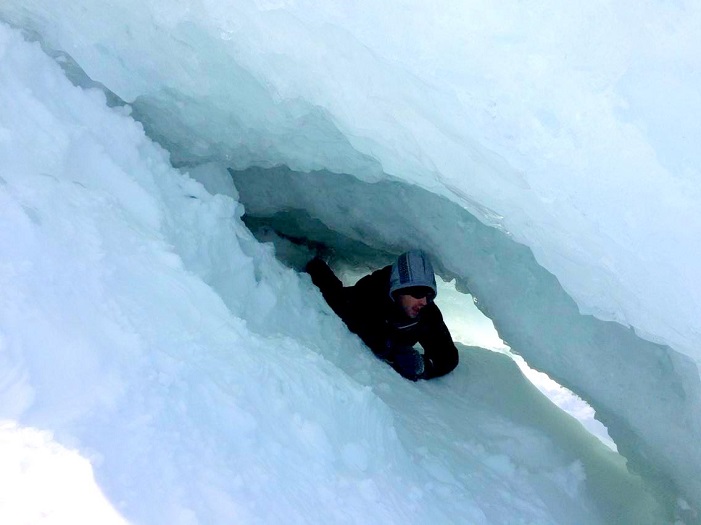 The Blue Ice Phenomenon boasted aquamarine colours, deep caverns, and crystal clear ice, allowing visitors to get a good look at what really lied beneath. Thousands visited the remarkable stretch of caves, and images were shared around the globe, sparking a tourism frenzy. Ontario Park officials noted that these ice caves were even still accessible on 29 March 2014, despite warmer temperatures and rain. Though they were considered highly unstable and people were advised to not enter the caves, the late ice on Old Woman Bay demonstrated just how deep the freeze was in Northern Ontario.

Aside from the magnificent ice caves, it was also the first time that sightseers were able to walk on the water immediately adjacent to the Agawa Rock Pictographs, allowing onlookers to see all painted symbols, including those visible only by kayak or canoe. Rare access was also granted to the Apostle Islands National Lakeshore caves, which hadn’t been visited by foot in over five years.

In 2015, ice caves again reappeared on the mighty lake, as another deep freeze set in on the Canadian Shield. The most popular caverns were found along Sawpit Bay, minutes past Pancake Bay Provincial Park. Unfortunately, the Blue Ice Phenomenon did not return to Old Woman Bay and may never again. Those who experienced Mother Nature’s rare treat may have very well truly experienced a once-in-a-lifetime gift.

With milder temperatures this year, those looking for the magnificent ice caves of Lake Superior will have to come back another year. Like a delicate or exotic flower, ice caves may not bloom every year. Even the calmest of bays on the Greatest of the Great Lakes have only but a thin layer of glass. Cooler and wide open Superior, including Agawa Bay and Old Woman Bay continue to rage on, with only the occasional slush ball floating closely to shore.

While Northern Ontarians relish in warmer, spring-like weather in 2016 brought on by El Nino, winter enthusiasts are reminiscing about the past three years’ deep freeze which brought remarkable sights. With climate change causing drastic shifts in weather across the globe, we can hope that the ice caves of Lake Superior are not a thing of the past, one for the history books. 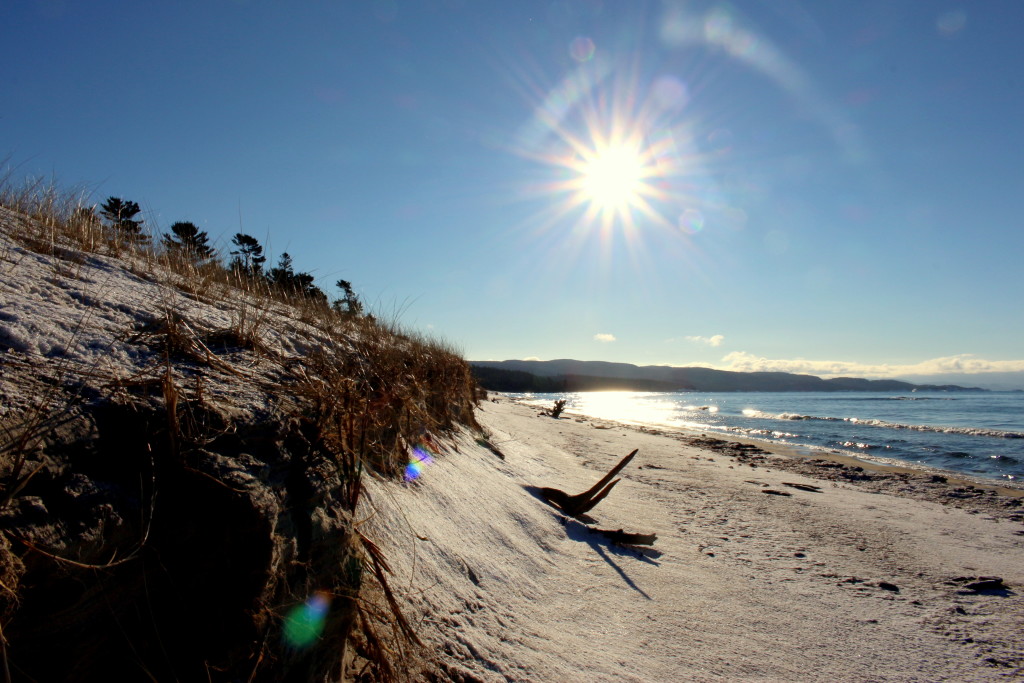