Trending
You are at:Home»Agriculture»It Takes Community to Make a Community Garden Grow: COUNT DOWN ON!
By Steffanie Petroni on June 6, 2017 Agriculture

Forest Heights Community Garden –formerly known as the Allard Street Garden, is in a race for time. Farmers and backyard gardeners have been pulling double shifts, picking rocks from the field, turning over soil, and seeding row after row to make the most of Northern Ontario’s short growing season. 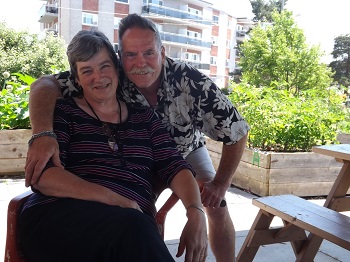 Suzanne Hanna, the enduring coordinator of the Allard Street now Forest Heights Garden, is scrambling to make the best of a tricky situation. Last year, with not much notice, Hanna learned that the property, hosting 65 community garden beds, was sold, the garden had to be evacuated. Flying by the seat of her pants, Hanna organized community gardeners and volunteers, who hauled out 65 garden boxes, gleaned vegetables from garden beds, and moved all they could before they would be considered trespassers upon the grounds that they lovingly toiled for so many years.

Left behind, never to be recovered, were patio stones, the tool shed built by former Sir James Dunn students, a fence, and fertile soil valued in the thousands.

“Everything we couldn’t get out in time was sold,” commented Hanna. “It was a crying shame. If I had known what it was going to cost to replace the soil I would have had people working in the middle of the night with flashlights to move that soil.”

It is estimated the cost to refill the garden boxes will total around $4,000.

But for Hanna, the first challenge was finding a new garden spot closely located to the former garden, and accessible- transportation and mobility was key. “We applied to the City and asked for help finding spots that are city owned –we also needed full sun and water. We ended up at the Forest Heights Park,” commented Hanna.

The new location is situated in the P-Patch, not too far from their original home on Allard Street. Before being approved for relocation a community consultation process was required where a smattering of ‘concerned citizens’ came forward to vocalize fears about parking nightmares on the street, and an invasion of rats to the potential garden.

“We were put through the hoops being that we would be the first community garden in a park in Sault Ste. Marie,” remarked Hanna who is quick to express her gratitude to the City for the accommodation. Final approval for the new location was given in the spring and Hanna was surprised and delighted that 45 of the 65 garden boxes were rented out by community gardeners who were confident that their growing season was saved. But Hanna, faced with more need than resource, and unsure if there would be a way to resurrect the garden in time for spring 2017, stopped accepting applications for the remaining twenty beds.

Community gardeners pay only $20 per season to rent their vegetable beds. “We try to stay affordable for the people we serve. Many of the garden participants are on restricted incomes. We have quite a lot of people that are new to the Sault, we have a number of the Indian community to the garden, we have a lot of interest from our Syrian refugee families, and other groups. The garden is a nice intergenerational of people from this community and elsewhere in the world, seeking a home here in the Sault,” commented Hanna.

With consideration to the financial limitations of the community gardeners, the City has agreed to a five-year occupation of the park for $1. However the costs start mounting when the expense of a fence around the garden, and replacing soil are factored. Thanks to a $3500 grant from the Horticultural Society, Hanna is able to kick in that amount for a fence that will costs thousands more but Amato Biasucci, owner of WINMAR, is kicking in the difference, providing the material and manpower to get the fence up in record time- two days in fact. WINMAR has also replaced the garden tool shed at no cost.

Hanna credits Biasucci’s generosity for the final approval of the fence by various city departments. “It probably helped that WINMAR was going to install it. It’s not a bunch of us garden members out there trying to figure out how to put a t-bar in the ground and attach a wire to it,” commented Hanna. “And I think the City wants us to be successful. I think they really do want to see community gardens work in the city parks. This sets a precedent and everyone wants it to be successful.”

It is expected that over the remainder of today and tomorrow (Tuesday and Wednesday) the fence will be installed. Next is the onerous task of moving everything out of storage from Lemieux’s Composting to the new garden site in the P-Patch. Lemieux’s Composting came to the rescue last fall when Hanna was frantically seeking a place to store garden beds and other community garden items on the quick. Over the next week Hanna’s big challenges will be moving gardening items from Lemieux’s and other temporary storage locations, to the new garden.

Hanna is looking for manpower and transportation next week. Volunteers, as well as cube trucks or vans or pick-ups or personal trailers- anything that can transport soil. “It’s going to be a monstrous move. It’s going to take a lot of hard work and humour. And it just needs a stalwart commitment to get it going.”

The aim is to get planting as soon as possible.

“We’ll have enough time to plant tomato seedlings, leafy crops, lots of beans and peas…things like that, as long as we can get those beds filled and planted by the second last week of June. We’ll have enough season but people may have to adjust their growing expectation,” commented Hanna.

In addition to blood, sweat and tears, the community garden requires the practical donation of cash to get those garden boxes full of nutrient rich soil –about $3,500 worth.

Can you help? Donations can be made to the Sault Ste. Marie Horticultural Society and those who are able to volunteer can contact Suzanne Hanna at 705.943.2207.