Trending
You are at:Home»Economy»‘Injury and Poor Care for Elderly Residents Worsened by Looming Lay-offs at Sault Extendicare’ Claims Staff and Union
By Steffanie Petroni on January 11, 2017 Economy 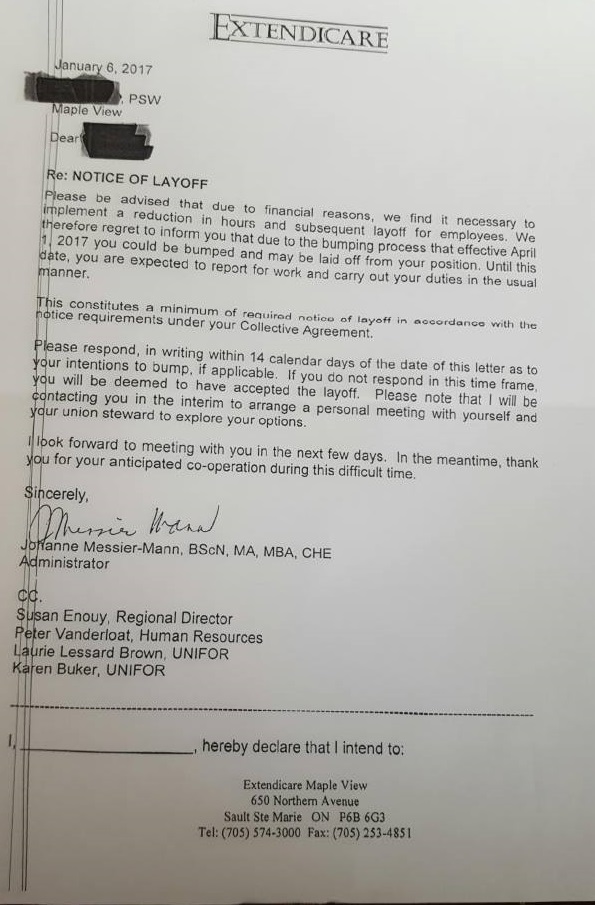 A concerned employee of Extendicare Maple View, a privately operated long-care term nursing home in Sault Ste. Marie, is sounding an alert upon receiving a notice that cuts to frontline staff are imminent as of April 1st, 2017.

A recent letter to Personal Support Workers indicated that a loss of 210 bi-weekly hours -or two full-time positions and two part-time positions, are being eliminated from the PSW staffing compliment. Further boiled down, that’s a 17% loss in PSW manpower which translate to a loss of 15 hours of support every day.

According to Unifor Local 1359 president, Lori Lessard-Brown, PSW’s who she says are already working at a 10% deficit in frontline manpower, cannot safely accommodate the burden of an increased workload.

“They’re already working PSW’s short. This is going to impact residents. Residents are paying for a service and in the end they won’t be getting those services. With lost time and injuries going up, people are burning out. Working short every day, short cuts happen. Injuries are already happening to residents and workers. We have a high rate of that,” remarked Lessard- Brown.

‘Jamie’, whose identity is being protected for fear of termination, is a PSW at Extendicare Maple View and expressed that the lay-off of PSW’s will exacerbate working conditions that already place PSW’s at greater risk for injury, and decrease an already questionable quality of care and safety for residents.

According to Jamie, PSW’s are often working short-staffed stating that during a regular shift PSW’s are caring for 9-10 residents –about 3-4 resident too many to ensure that each resident is cared for properly. When PSW’s call in sick, shifts often go unfilled and PSW’s may be caring for as many as 12 residents per shift.

Among Jamie’s concerns for residents are an increase to falls.

“One resident’s light may go unanswered because we’re at the other end of the floor helping four other people. So this resident, who needs assistance to get out of bed to get to the washroom, tries to get there on their own and falls. Falls are happening a lot. It’s sad,” remarked Jamie.

Jamie cited a list of safety and quality of care issues for residents owing to current PSW-resident ratios: residents missing showers; increase in urinary tract infections; and residents taking all of their meals in bed or missing meals. Very basic needs of residents are not being met according to Jamie.

“A lot of time people will go without their showers. We have to leave them in bed all day. They have to eat all their meals in bed because we don’t have the time or manpower to get them out or residents are missing meals because we don’t have time to feed them. We have to ask permission to use extra diapers now. Management doesn’t want to give them to us. They say we’re over using them. They weren’t giving us cloths for hygiene- they just wanted us to use wipes to save money and so people we’re getting urinary tract infections because we weren’t cleaning them properly and we have to rush care,” stated Jamie.

Jamie also articulated concerns for PSW’s who run short on the supplies they require to keep them safe in their work- like gloves. Jamie underpinned that PSW’s are already experiencing compassion fatigue and injuries on the job, and people calling in sick or working in modified roles are increasing as a result.

Injuries to PSW’s are occurring because staff are rushing to provide care. Back, wrist and shoulder injuries are prevalent among staff. The lifting of residents are required to be done by two staff but there are times when there is only one staff on the floor. There are also residents that require 2 or 3 people to provide personal care and this isn’t always possible due to staffing shortage.

“We have one resident that is extremely aggressive. It takes three staff to change her. She has fallen. She has beaten people up –staff come out with cuts and scratches all over their body. She’s bruised from head to toe. She misses meals…We don’t have the staff to take care of her,” admitted Jamie.

Johanne Messier-Mann is administrator for Extendicare Maple View. When asked about the increased injury to PSW’s Messier-Mann remarked, “The numbers would have to be reviewed.”

When asked to address the safety and quality of care concerns Jamie outlined, Messier-Mann remarked, “This goes to the quality of care in respecting the hard work that our staff do. Quality care is a big thing and we are certainly working hard to achieve that and maintain that and we will continue to do that.”

When asked if the staff have brought forward the above concerns to her, Messier Mann remarked, “They have expressed some concerns and we work hard with our team to make sure these things are resolved.”

According Messier-Mann all the funding for Extendicare Maple View is routed through the Ministry of Health and Long-Term. Funding for each nursing home is determined by the Case Mix Index and this year a .1% increase was meted to Maple View through the CMI.

A breakdown of salaries and revenues specific to Extendicare Maple View was not provided prior to the publication of this report. A request to corporate for this information has been submitted.

According to Messier-Mann the impact of the lay-off of PSW’s may not be as significant as Jamie and Lessard-Brown are indicating, stating that the nursing home is attempting to fill PSW roles that have become available. “The number of people going out the door will probably not be that many because we already have some vacant positions that we can fill. So that will help.”

Messier-Mann did not provide comment on how many PSW vacancies existed or would be filled. “I can’t get into those details at this time. It’s very active and dynamic and we’re working on this as we go along.”

When asked if it was possible to find a way to prevent the lay-offs of PSW’s and increase the number of frontline staff on the floor Messier-Mann remarked, “I would love to say to say that there is a possibility that this may not happen but it’s in the financial plan and it will happen on April 1st.” Adding, “I want to underline that this is not taken lightly and it’s very difficult for everyone. We’ll work very hard on making sure that the residents get good quality care and services. We do respect our staff and the hard work they do. These things are not easily done and weighs heavily on everyone.”

In the meantime, Lessard-Brown is at the bargaining table looking for solutions. In addition to the loss of 4 PSW positions, there has been reductions to laundry valets and the loss of a staffing clerk. Of the loss of staffing clerk Lessard-Brown remarked, “So that means when people are calling in sick or burnt out there might not be anybody in the staffing office to try to find your replacement staff. So nobody is coming in.”

The first union meeting since PSW’s received the notice of lay-off is scheduled for this Thursday. “We’ll be letting people know what’s going on,” remarked Lessard Brown. “We’ve been sitting down at the labour management table looking at injuries and sick time and trying to figure out how we’re going to help PSW’s that are working short. Residents are paying a lot of money to stay in these long-term care facilities and in the end –if you want to call it ‘neglect’, that’s what’s going to happen.”

Jamie questions whether or not the recent promise of lay-offs is connected to recent contract negotiations. “We’re in contract negotiations and we’re supposed to be getting a raise. So I wonder if that’s why we’re being hit with lay-offs. This happened before –we got raises and management laid a bunch of us off. So we may be getting a raise, but it’s at the expense of two full-time staff and two-part time staff.”

Jamie expressed hopelessness about the situation. “I don’t know what we are going to do. It feels like we just keep hitting a brick wall. The Ministry doesn’t do anything. Management couldn’t care less because they get their money. It feels like us against everyone.”

Upon receiving the notice of lay-off Jamie noted that several copies of the letter were strategically left around the nursing home. “The families have no idea what is going on. A couple of people have left layoff notices laying around for family to see and they’ve all disappeared. As staff we are trying to talk to the families, trying to get them involved. But if we get caught we’re in a lot of trouble.”

As a coda to this alert Jamie implores more involvement from family and community. “Advocate for your loved ones. Go as far as you can. Get a lawyer, call the Ministry. You have to advocate for their safety. Without family they have nothing. We fight as much as we can as staff but…we’re just staff. It doesn’t mean much. The family really needs to get involved and this community needs to step up.”