Trending
You are at:Home»Environment»It’s a Beautiful World: Indigo Buntings in Algoma
By Steffanie Petroni on May 20, 2017 Environment 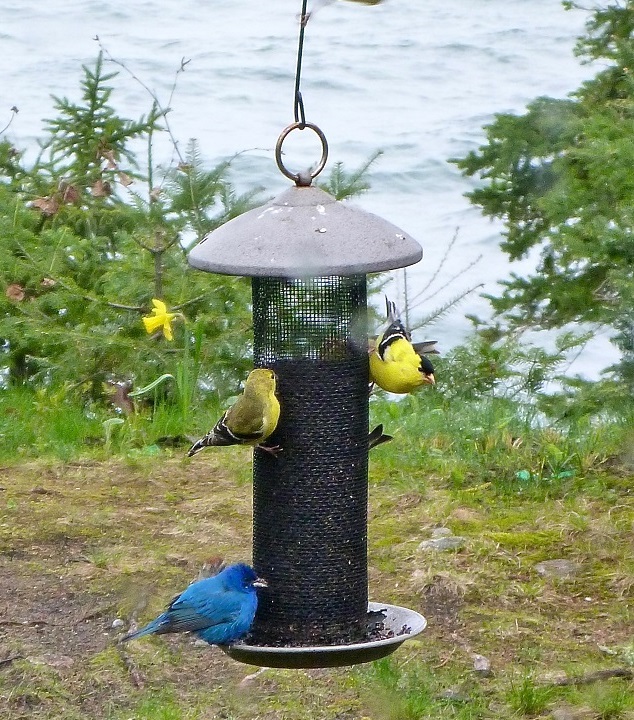 Avid birder or not, springtime sightings of colourful avian travellers and returned expats delights even the most indifferent spectator of the natural world.

Rick Currell, a definite ally of all feathery friends, is a year-round cottager in Montreal River Harbour. Currell may be familiar to locals in the Algoma District for his much frequented MRH weather station and webcams, and has gathered a respectable fan following for his frequent updates about what’s happening in the area.

Two days ago, Currell was caught off guard when his eyes were drawn to a little electric pop of blue perched on one of his many bird feeders. Yesterday, in an email message, he wrote:

Driving rain from strong north winds set the stage for my sighting of an Indigo Bunting.  The color blue is unlike anything I’m accustomed to seeing.  I’ve seen in the past, birds getting knocked off their migratory route here along the East shore of Superior with weather changes and strong winds.  I quickly snapped pictures with my smartphone through a rain splattered window.  Little did I know at the time that my visitor would hang around to feast on my thistle feeder and sunflower feeder.  This morning I was happy to see he was still around allowing me to capture some better photos.

The Indigo Bunting, who spends his winters in Central America, is a common migrant from May to September in Northern Ontario, nesting as far north as the Lake of the Woods, all along the Lake Superior and Lake Huron shorelines, and extends its territory south to Windsor and east along the St. Lawrence River. 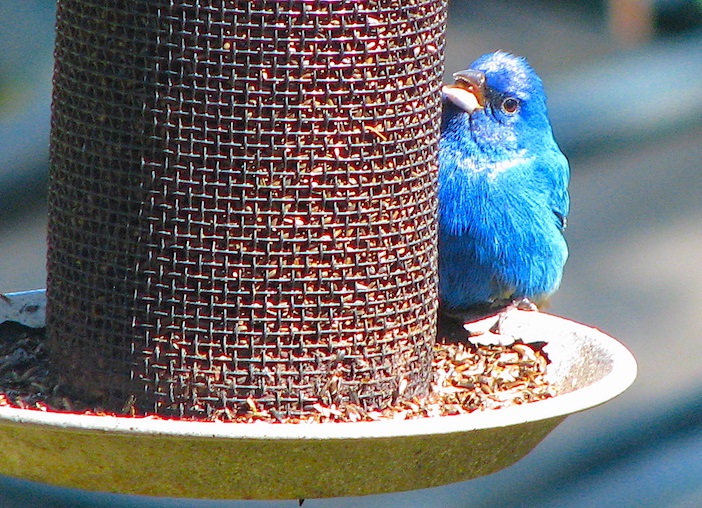 Though a common bird to the area, sightings of the Indigo Bunting are rare, unlike the stampede of American Gold Finches that can be viewed occupying backyard feeders in the Algoma District. According to Carter Dorscht, Land Stewardship Coordinator with the Kensington Conservancy, that could be because the species is not as prolific as other birds in Algoma, though more reports of the Indigo Bunting tend to originate east of Sault Ste. Marie.

Dorscht, who has no problem identifying as an avid birder, remarked, “Since they are so beautiful and bright blue, when you do see them, people get really excited. But they aren’t as numerous as other species so you probably won’t see more than two at a time.”

Consulting ebird.com, Dorscht noted that there are several reports of indigo buntings in the area but sightings drop off moving north along the Lake Superior coast. “But that might be because there’s less birders that way,” explained Dorscht.

Ebird is a citizen science project that allows regular folks to submit their bird sightings for the use of scientists and conservationists around the world. “It’s also a very helpful tool if you’re trying to get into birding, as it helps you know where all the good spots to look for birds are,” shared Dorscht.

Dorscht provided this link from the ebird website, which tracks sightings of birds spotted in Algoma this year.

Some have expressed that the true blue of the Indigo Bunting is rivalled only by sky. Seeking out the protection provided by thorny stems, this little bunting favours making a nest deep within the safety of raspberry bushes. The female is similar in size but is a soft brown colour with darker brown streaking on its breast and a white throat. She will lay 3-4 white to bluish eggs and incubate them for up to 13 days.  Indigo Buntings will feed on insects- especially grasshoppers, beetles, weevils, flies and larvae; and low vegetation –especially goldenrods, dandelions, and thistle seeds.

Three days later Currell is happy to report that his little Indigo Bunting is still hanging around his thistle feeder. 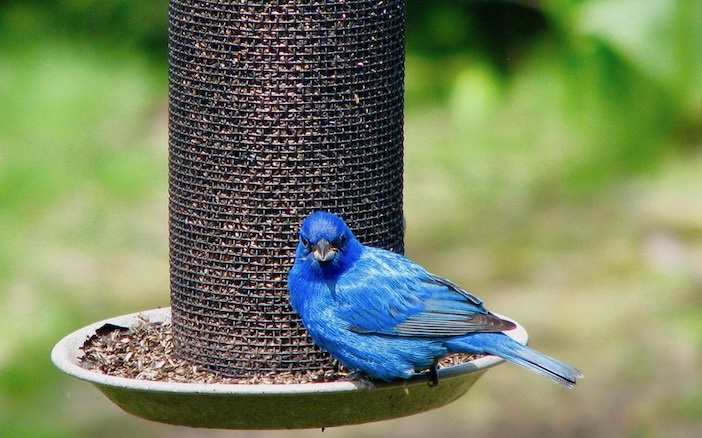