Trending
You are at:Home»Economy»HAPPENING FRIDAY| Ancient Water Highway: From Gros Cap to Thunder Bay
By Steffanie Petroni on June 8, 2017 Economy

Containing 10% of the world’s fresh water, Lake Superior is the largest fresh water lake on earth. Long before colonization, First Nations people accessed this ancient water highway to fish and hunt. Eventually the eastern and western shores of Lake Superior became a hub and a point of junction for the Fur Trade that spanned 3,000 miles from Montreal to Sault Ste. Marie and to the North Country above the lake. Despite the industrialization of certain points along Lake Superior, this magnificent crescent shaped body of water with an area of 32,000 square miles, has remained for the most part, a pristine water source that maintains a delicate ecosystem both within and along its shoreline. The power and beauty of Lake Superior captivates paddlers, outdoor enthusiasts, and conservationists alike.

On June 9th, four years after conceptualization, the Lake Superior Watershed Conservancy (LSWC) is celebrating the formal opening of a 1,000 kilometer water trail between Gros Cap and Thunder Bay. Complete with 16 access points and 1.2 million dollars of new infrastructure, the water trail connects to the Trans-Canada Trail- also known as the Great Trail. Developing the trail required partnerships with communities along the Lake and First Nations people, as well as national and provincial parks. 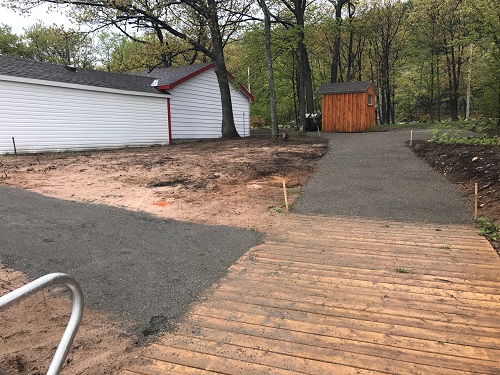 Composting toilets and accessible pathways are a few features found at many of the 16 docking sites along the 1,000 km of water trail between Gros Cap and Thunder Bay. 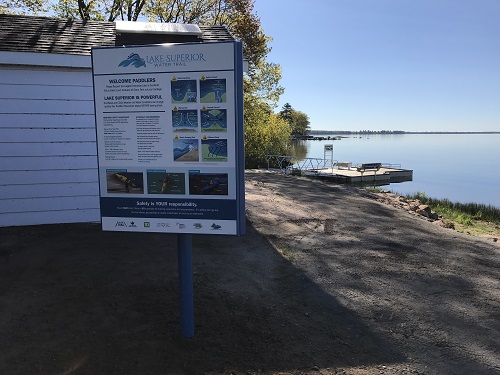 Informative kiosks containing information about Lake Superior, water safety, and local culture and history are located at each site. 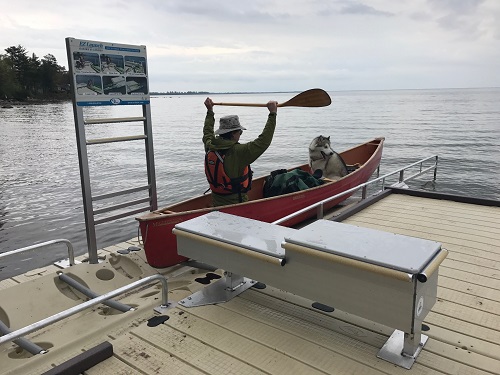 Required to kick in only 10%, each location selected which amenities they would feature. Tomorrow’s ribbon cutting at Gros Cap Marina Park –information below, shows off the full suite of features designed to be accessible for all paddlers, hikers, cyclists and visitors and includes: Clivus Multrum composting toilets, universal access pathways and docks, picnic tables, informative kiosks, bear proof recycling and garbage containers, dog waste containers, and secure lockers for paddlers to store their canoes, kayaks, and other gear.

Joanie McGuffin, perhaps best known for her writing and conservationist efforts, is also the Executive Director of LSWC. Of her experience jointly overseeing the installment of accessible infrastructure with Trans-Canada, she remarked, “My eyes have been opened. If something is accessible to a person in a wheelchair it’s accessible to all –elderly people, families with young children, people with visual impairments. Everything has been designed so that everyone can enjoy Lake Superior and get back in touch with the outdoors. And everything looks beautiful. Universal access was one of the key elements to this entire projects.”

Each access point is in various stages of universal accessibility but McGuffin clarified that all sites would be in compliance by the end of July.

Enhancements made along this portion of the Lake has obvious economic tourism value. As a comparison, along the south shore of Lake Superior in Michigan, Pictured Rocks National Lakeshore attracts one million paddlers annually.

Located in Prince Township, Gros Cap Marina can provide the community with an economic boost.

“The township has hiking trails, a designated section for cycling, the water trail, and the most beautiful piece of Lake Superior coastline,” remarked McGuffin. “It’s close to the United States. It’s close to the airport. It has all these separate pieces to bring all this benefit to Prince Township but you have to connect the dots before it brings value. The water trail helps to do that.”

As McGuffin explained, connecting to the Trans-Canada Trail and LSWC through the water trail, provides Prince Township with national and international exposure. “We’ve taken one piece of the puzzle that they own and placed it into the larger puzzle of the whole lake and the larger puzzle of a trail that connects us across the country.”

And that point is significant to all access points along the Lake. “This water trail draws out the local cultural story. Trails are most valuable when they tell stories –historic stories, First Nation’s stories, geographic stories, geological stories, dark sky stories, botany stories, lighthouse stories –you name it! But the cultural stories are the gold to be mined along the trail and what we need are the interpretative, certified guides who can travel safely in these outdoor environments while sharing these stories,” elaborated an enthusiastic McGuffin.

McGuffin also acknowledged that trails contribute to increased health as well as sense of community. “We have problems human health wise. Trails are an inexpensive way to connect people back to health and the outdoors. But we also need to think about designated trails that are planned around communities and can get people from home to work or shopping. Then you have created something that not only brings us back to health, but back to community and that brings us back to wellbeing.”

But from a conservancy standpoint the water trail isn’t just a trail. “It’s a connection to the land, people, communities, and the life of this basin,” remarked McGuffin. “We’re not trying to run a water trail. We are trying to create a population of people around this basin that care about this lake. The Conservancy understands that we do not save Lake Superior –it is the cooperation of communities and people that live here that will do that. And we also felt that the constituency of paddlers was very uncontroversial. Paddlers are very connected to the water and the land and the lake. We thought that would be a great network of people to help with all of that.”

Tomorrow’s event has also been organized in collaboration with the Waterfront Regeneration Trust- the entity responsible for managing the 340 kilometer cycling route from Sudbury to Sault Ste. Marie. “This is also the 150th birthday of Canada. We wanted to make the celebration really special for the Trans-Canada Trail,” commented McGuffin. A ribbon cutting is planned for each 16 access point along the water trail though tomorrow’s celebration is the inaugural event that officially marks the commencement of four long years.

In addition to a host of dignitaries, McGuffin hopes that many people will come out to participate in the events kicking off Friday at 7:30 a.m. at Gros Cap Marina Park. “This is the largest fresh water lake in the world,” remarked McGuffin. “It deserves our respect, our love and our involvement in its future. Lake Superior represents 10% of the fresh water on this planet. This trail is a way to celebrate fresh water.”

Please see the press release below for tomorrow’s itinerary of events. Be sure to hover your cursor at the bottom of the page to access page two.