Trending
You are at:Home»Environment»Guardians of Eternity: Keeping the Monster Through Oral Tradition
By Steffanie Petroni on December 6, 2015 Environment

Coins, fillings, gourmet dinners, wedding bands, computers, spacecrafts, cutlery and even beauty creams are composed of it. Gold that is. Wikipedia tells us that in its purest form, gold is a bright, slightly reddish yellow, dense, soft, malleable and ductile metal. Nobody really knows when humans began mining for the precious metal but the discovery of gold artifacts in graves thought to be built between 4700 and 4200 B.C. suggests that mankind has been ‘perfecting’ the process for 7,000 years.

But hard rock mining of gold leaves behind a deadly legacy. As gold bearing ore is processed, arsenic trioxide is divined from the rock, a toxic by-product that is a proven non-threshold carcinogen.

There is no finer example of the deadly production of arsenic than the Giant Mine. The gold mine was in operation from 1948 to 2004 in Yellowknife, Northwest Territories. In 1999 the feds took possession of the mine. Aboriginal Affairs and Northern Development Canada assumed responsibility of the mine which included clean-up of the site. The Giant Mine site consists of 950 hectares containing 8 open pits, 4 tailing ponds, 100 buildings and 11,500,000 cubic feet of contaminated soils.

During its’ lifespan the Giant Mine produced 7 million ounces of gold. Controlling companies earned $1.1 billion –figures in 2002 dollars and $572 million in taxes and royalties went to the government with $59 million in subsidies going back to the mine.

And how much arsenic trioxide was produced? 237,000 tons.

To put that in perspective that’s enough arsenic to fill seven and a half 10 story buildings and enough to kill every man, woman and child in the world several times over, and it will remain toxic forever.

And though the federal government has assumed a role in monitoring the storage of the arsenic, it is really the Dene people who feel the burden of this threat that looms over all of creation. This contaminated land has been the territory of the Dene for 10,000 years and shall be for 10,000 more. The Dene aren’t leaving and they have begun asking themselves “how do we protect future generations?”

Film makers, Ron Harpelle and Kelly Saxberg, in partnership with Yellowknives Dene communities of Dettah and N’Dilo, and their neighbours in the City of Yellowknife, struck out to answer this question in the documentary Guardians of Eternity.

As Harpelle explains, the government is attempting to stabilize the arsenic underground.

“The idea was to put it underground and with permafrost in the North West Territories they speculated they would be able to keep it frozen. With climate change that’s become an issue. So they’ve come up with a system called the frozen block method which is essentially a skating rink technology,” remarked Harpelle.

The government has set aside $100 million in taxpayer dollars over the next 100 years to apply towards remediating the issue and finding a better long term solution. In the meantime, there’s a lot of hoping that nothing bad happens and as Harpelle points out “100 years is a long time and nature has a way of doing things”.

“Arsenic is water soluble so it can very easily contaminate water sources and the mine happens to be on the shore of Great Slave Lake. The big thing for the government is to figure out how to freeze this arsenic in perpetuity. And arsenic lasts forever –like nuclear waste. It can get into the food chain, into lakes.”

Harpelle, located in Thunder Bay, notes that the Dene’s situation is relatable to many communities in the North. As a resident of Thunder Bay, Harpelle is all too familiar with the risk presented by the many mines surrounding the lakes in his neck of the wood. And for other Northerners, the recent pressures from the Nuclear Waste Management Organization to store nuclear waste created in southern Ontario, and the contentious matter of the Ring of Fire forges a common understanding among the most hearty of Canadians and in particular, indigenous People. 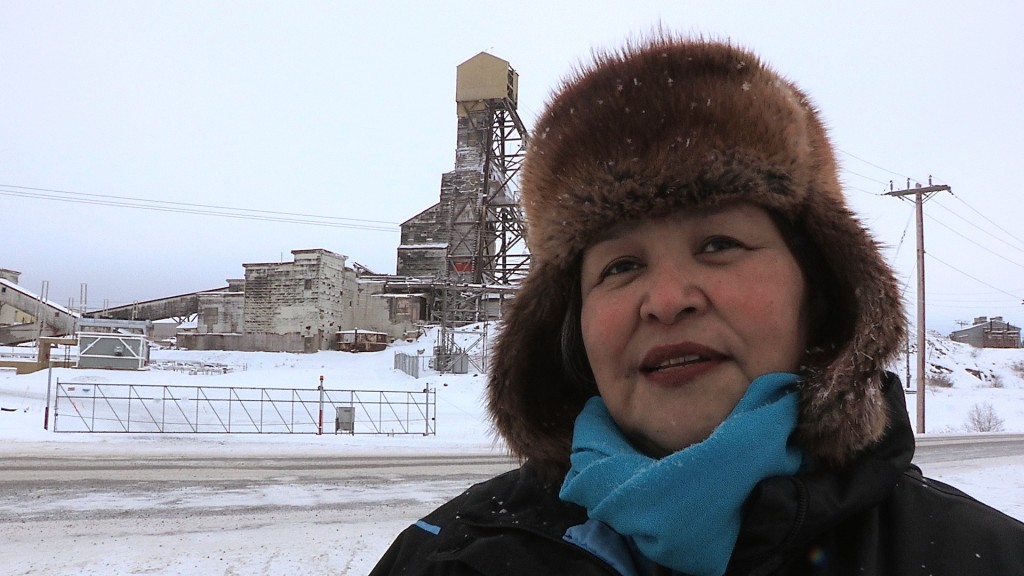 Mary Rose Sundberg. The Giant Mine looms behind her.

The Dene are bereft for the tragic inheritance left to their children and many generations of grandchildren. In the documentary, Mary Rose Sundberg -a Dene Elder, shares, “How could we have known what was going on there…. we are the guardians of eternity, forever.”

As the government scratches their head trying to figure out a long-term plan to protect the world from this deadly arsenic and cross their fingers that technology holds up and hold their breath that there will be no power outages over the next 100 years, the Dene are looking to tradition to save humankind.

“The big challenge for us and the Dene is how do you tell people of the danger in the future? Do we creates signs in English and French? Who knows how we’ll be communicating in 1,000 years. A symbol? Will that symbol mean anything in 1,000 years? Language and symbols aren’t a way to ensure that people of the future will understand the danger that lays beneath their feet.” It is difficult to miss the urgency and earnest in Harpelle’s voice.

“The Dene have their old legends about how they came to be and how their world was constructed. It’s true that scientifically these things may not hold up but that’s not important. What is important is that the Dene have an understanding of who they are and they transfer that orally to their children,” remarked Harpelle. “So the job now for the Dene, because it’s not our job, it’s the Dene community and it’s their identity –is to come up with a legend. And it’s a simple legend –there’s a monster under the ground and if it ever gets out it’s going to kill everyone. That to us is the most effective way of conveying that knowledge in the future.”

The making of the documentary was a smooth process but for the reluctance of the feds to grant the film makers permission to attend the mine facilities and observe the frozen block process. The Dene intervened and Ottawa eventually relented.

Guardians of Eternity is part of a larger initiative called the Toxic Legacies Project and is funded by the Social Sciences and Humanities Research Council. The project examines the history and legacy of arsenic contamination at Giant Mine. The project is a partnership among researchers at Memorial University –John Sandlos and Arn Keeling, and Lakehead University –Ron Harpelle, the Goyatiko Language Society -a Yellowknives Dene First Nation non-profit organization dedicated to the preservation of the Weledeh language, and Alternative North -a Yellowknife environmental and social justice coalition that conducts public interest research.

Knowing of the eternal threat beneath the ground and passing forward the knowledge is just one component, albeit a critical one, of the Guardian of Eternity documentary. Communicating the lessons that can be gleaned from the Giant Mine situation is also prudent. And that means skimming off the academic bull and making knowledge accessible to ALL people.

“We need to understand the bigger picture,” expands Harpelle. “We understand that it’s bad and we have a gut reaction to it and maybe that’s nature’s way of protecting us. But it’s important that people understand as much of the science as possible. It’s a question of education. You need somebody that can interpret that type of information for ordinary Canadians who can really understand it.”

By day Harpelle teaches in the history department at Lakehead University. As part of his ongoing research as a historian a documentary seemed to be an effective way to bridge the information gap.

“I was interested in making a film for all Canadians but putting it in a format that the Dene across the North and other First Nation communities could understand. Living in remote communities, they don’t necessarily have access to big libraries or post-secondary institutions. We wanted to be able to reach them.”

The documentary was a convergence of like-minded independent researchers. Harpelle emphasizes that the motivation to produce Guardians of Eternity came from a sincere desire to make a difference.

“We’re independent scholars making a documentary. We’re not on anybody’s payroll. We’re interested in the communities and the people that live there. For us it’s really important that we put this information into the hands of the people that need it most.”

*Guardians of Eternity will be shown at the Finnish Labour Temple, 314 Bay Street, Thunder Bay on Thursday December 10 at 7 p.m. This is as part of a Docs on Bay double bill that includes Between a Rock and a Hard Place, a documentary about Red Lake, Ontario. (Director Cliff Caines will also be in attendance). Q&A will follow each film. Tickets available at the door and just $8, or pay what you can.

You can learn more about Guardians of Eternity and watch their trailer by clicking here. 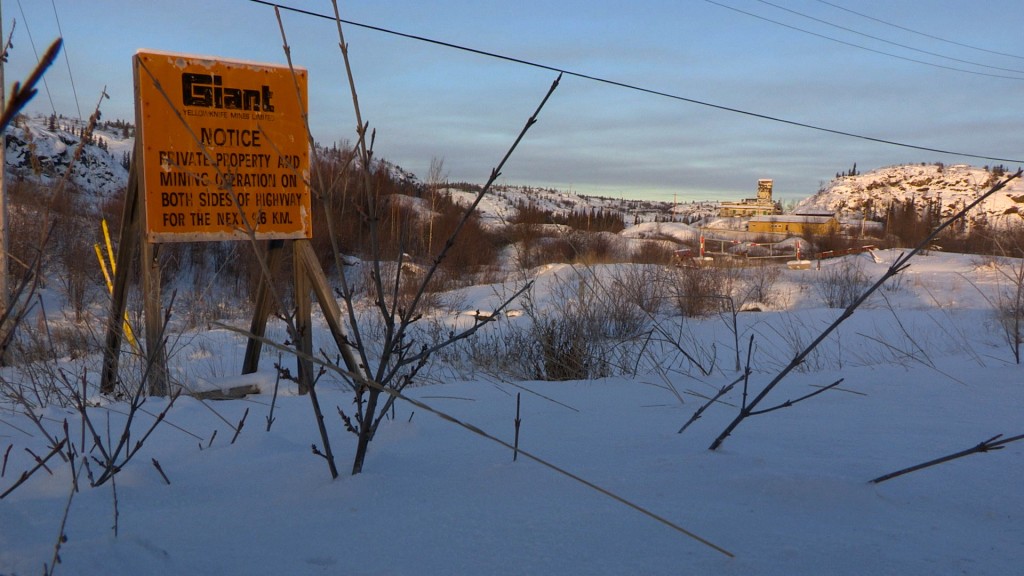