Trending
You are at:Home»Environment»On the Goulais: In Search of Dragonflies
By Steffanie Petroni on June 28, 2017 Environment

It was fourteen years ago, when my son – not quite 5 years old, gifted me with one of my sweetest memories of his childhood. It must have been early summer because the day was sunny but the air was still fresh. It was mid-morning and the light was soft upon my son’s golden head as he joyfully pumped his strong little legs along the sandy shore of Batchawana Bay, chasing a small cloud of dragonflies. He stopped running, fascinated by their sudden change in flight pattern as the dragonflies began darting and hovering among a cache of sand flies. He slowly stretched up his right arm into the dragonfly swarm, and with his right hand, at the most perfect once in a lifetime moment, he delicately seized the tip of a hovering dragonfly’s tail between his thumb and index finger. The scene took my breath away, as my small son stood there, still and lovely, his arm reaching towards the blue sky, at the tip of his fingers, the dragonfly straight as an arrow, fluttering his wings as though he had the mite to lift both of them and zip through the air together. The magical sight lasted only a second or two, and then in act of self-preservation, the dragonfly curled his body, bringing his nose to his tail and bit the tip of my son’s finger. My son released the dragonfly, his face crumpling as he wept in my arms not for the pain on his finger but in his heart, sobbing, “I never would have hurted it!”

Dragonflies don’t sting, and rarely do they bite.

Predating dinosaurs, experts estimate that there are over 5,000, perhaps close to 6,500 species of dragonflies in the world today. 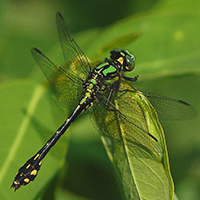 Dragonflies are an aquatic insect. Beginning their life as larvae in the water, these bottom dwellers disappear beneath sand, silt and rocks, feeding on other insect larvae found in the water, and sometimes even tadpoles. Most of their life is spent beneath the water’s surface; some remain there up to two years.

When the larvae are ready to enter their final phase of their lifecycle, they crawl out of the water to find a safe place to emerge from their exoskeleton- or exuvia. Once free of its exuvia, the dragonfly must pump fluid into its furled wings and wait for the wings to harden before taking its first flight. This a vulnerable time for the adult dragonfly as wading birds, raptors and amphibians congregate for the exodus of the larvae from water to land.

Once the wings harden, this voracious carnivore will capture and devour mosquitoes, black flies and other insects while in flight. Dragonflies also mate in flight and will return to the water to lay eggs. Though a few species of dragonflies migrate, most live as adults for only several weeks or a few months before they expire in cooler temperatures, or more likely, from predation.

These mystical creatures have captivated storytellers for centuries, inspired the next generation’s flying robots, and it is also believed that when a dragonfly lands on your head good fortune is coming your way. Oh! And dragonflies also make for popular tattoos these days!

Valerie Walker appreciates the function and the beauty of the dragonfly. The former professor of Sault College’s School of Natural Environment and Outdoor Studies, Walker is a member of the Sault Naturalists. In partnership with the Ministry of Natural Resources and Forestry, and Sault College, the group received a grant through Ontario’s Species at Risk Stewardship Fund. 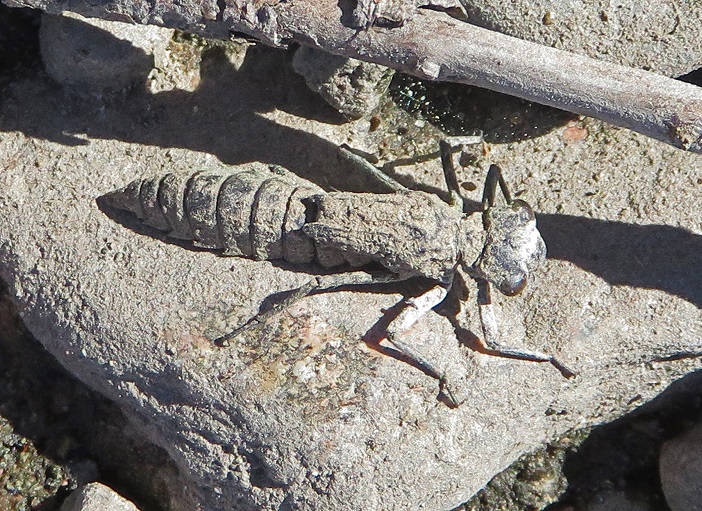 The exoskeleton- or exuvia of a dragonfly found along the Goulais River. Photo courtesy of Chuck Miller.

The funding covered two summers of field research in Searchmont, Ontario. Three research sites were located along the Goulais River on Whitman Dam Road where researchers set out to collect the discarded exuviae –or exoskeletons, of dragonflies.

The research has two primary components: the first part an attempt to identify two rare and endangered dragonfly species –the Pygmy Snaketail and the Riveriene Clubtail; and the second part focuses on identification of any dragonfly species in the area. 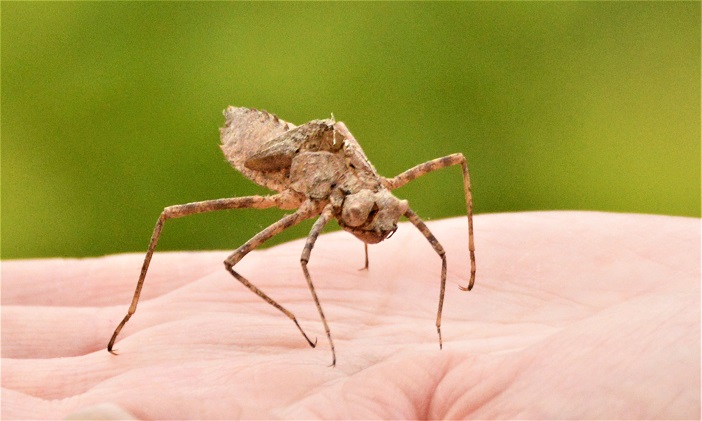 Discovered along the Goulais- the exuvia of a River Cruiser dragonfly. Photo courtesy of Mark Olivier.

“There’s not a lot known about dragonfly distributions in this area so we thought this was a good opportunity to contribute to the collective database in the area,” remarked Walker. “Of the two species at risk we have no record of it being in the Goulais. In fact, the Pygmy Snaketail has only been recorded in one location in Ontario and that’s in northwestern Ontario. The Riveriene Clubtail has been found in three different places in Ontario, the closest to the Sault being around Massey at Chutes Provincial Park. Both of these species are considered very rare in Ontario.”

Walker explained that the Goulais River is an ideal habitat for dragonfly larvae. “It’s a large river system that is for the most part surrounded by a large intact forest. The river is fast moving, cold and pristine -a typical habitat for dragonfly larvae. The Goulais seemed to have all the parameters for supporting this species so we really wanted to conduct the research there.” 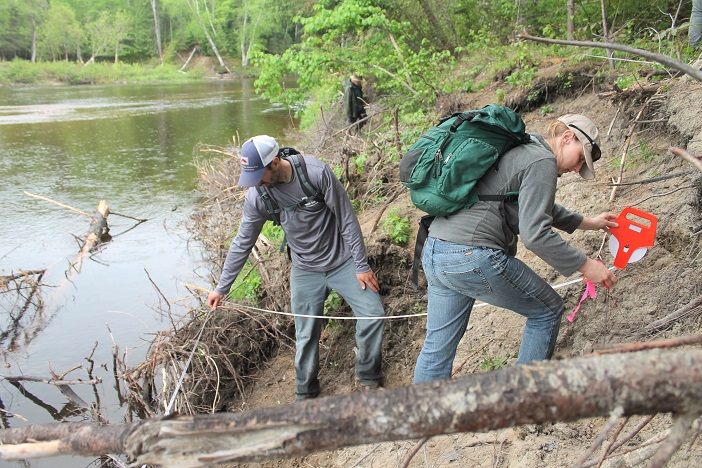 Funding for the study enabled the group to bring up an actual dragonfly expert from Peterborough –Colin Jones. Jones identified the best sites to set up three 10 by 2 meter transects –or lots, at each of the three study locations along the Goulais. “Some of the transects are rocky shoals, sandy, vegetative or undercut banks. Some are flat or steep. So we had a whole variety of habitat sites to look for the exuviae. And though they are quite light and very 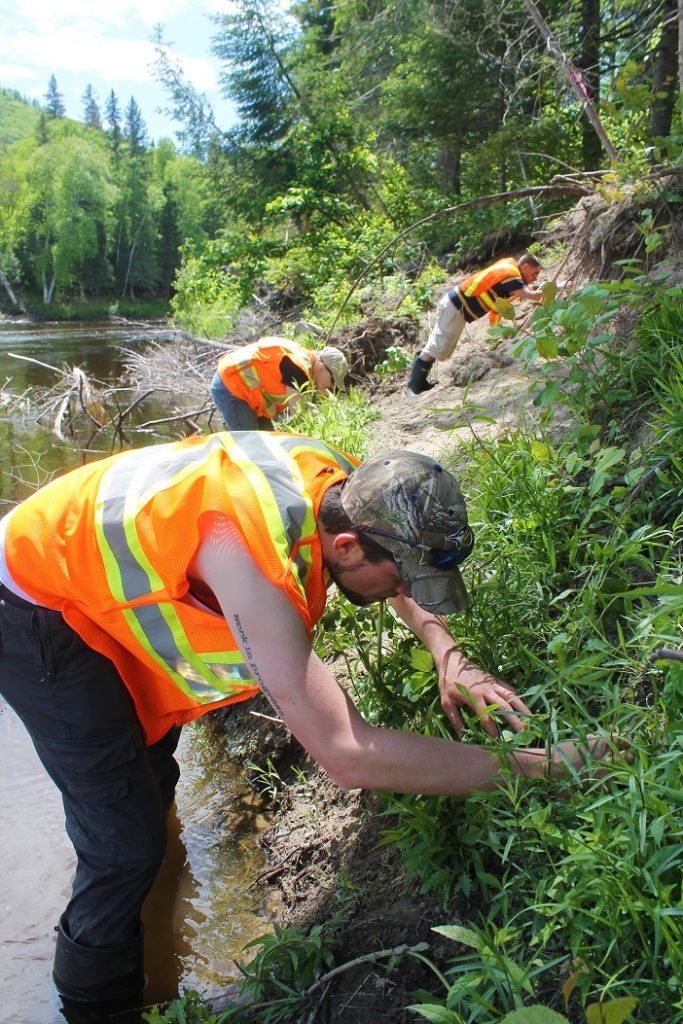 fragile they seem to be fairly persistent in being there,” remarked Walker.

Smiling, Walker added, “It’s kind of a nice study I think, because we don’t’ have to kill anything. We’re just picking up these things that have been discarded. Believe it or not they can look at these exuviae and they have all the characteristics of the larvae so you can use these taxonomic keys to identify them to species.”

Though findings for this year’s collection is still in process, compiled data from last year’s efforts show that a total of 346 exuviae were collected in the month of June over 21 consecutive days. Eleven species were identified in total. “There are two species that represented a very large portion what we found and they composed 67% of our discovery. The Moustached Clubtail was the most common followed by the Riffle Snaketail. And we also found species that have never been documented in the area.”

Last year’s findings, however, did not produce a discovery of either the Pygmy Snaketail or the Riveriene Clubtail though Walker has not yet ruled out the possibility that the second season of collection could produce a positive finding. Researchers altered their collection period this year, and staggered their 21 days of collection beginning at the end of May and completing in early July.

Walker is not discouraged that the work has not yet indicated the presence of the Pygmy Snaketail or the Riveriene Clubtail. “It could mean a couple of things. No data is data. So saying something isn’t there is just as important as saying something is there. And we can only base this information on the first year’s data so far. We also still want to know what else is there so it’s not a failure if we don’t find the two species that we are targeting.” 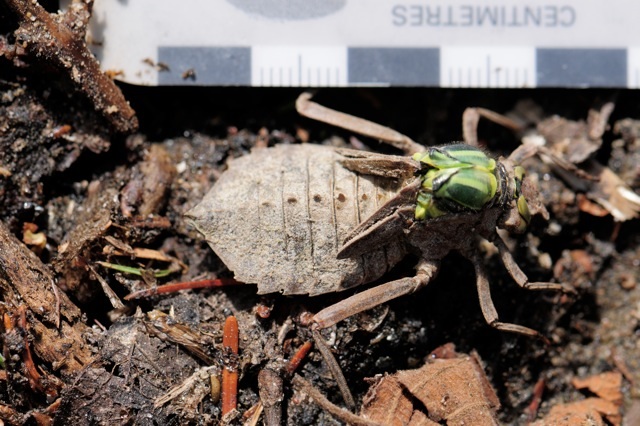 The adult dragonfly in process of emerging- and those aren’t two green eyes! “Those are basically his shoulders pulling out of the exuvia. The dragonfly will pull the head and thorax out and then really struggles to get the rest of the body out. Then often it will cling to its own exuvia, using it as a substrate, and pump its wings out and then take off.” ~ Valerie Walker. Photo courtesy of Peter Burtch.

Walker elaborated that both of these dragonflies might not be present in the area simply because they are just not a northern species. “They are quite prevalent east and south of us. And the Pygmy is found in New Brunswick and the US. So the two species really are at the Northern end of the range if they are here. They are called species at risk in Ontario because they haven’t been reported here.”

In addition to predation, climate change and the introduction of invasive species to the habitat, the 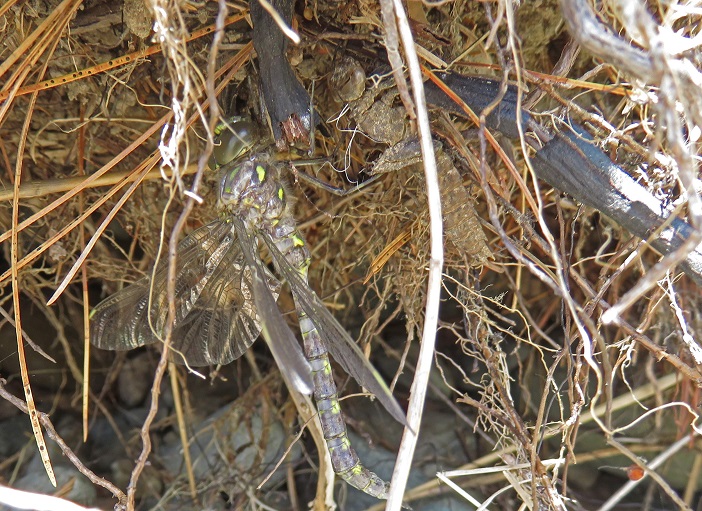 Look closely to find the exoskeleton! “If we find dragonflies emerging on the site we usually put a stick on the ground and leave it because we want to collect the exuvia but not until the dragonfly is gone. So we watch it and take pictures and then we can actually match up the exuvia to the dragon fly on site. Sometimes it’s amazing how fast they can do it under the right conditions.” ~Valerie Walker. Photo courtesy of Chuck Miller.

dragonfly’s greatest risks are typically manmade. Recreational traffic along shorelines or heavy activity like ATVing pose a threat to immature dragonflies. But it is manipulation or quality of the water that most jeopardizes the species.

“With the dragonflies what people need to know is water impoundment from dams –natural or manmade, but usually manmade ones, are far more damaging and detrimental. Especially if you have a power generating facility that may be releasing water at different times creating major fluctuations in water levels and force. When you have these dragonfly larvae that are moving onto shore to become dragonflies and suddenly they are flooded- well that’s devastating,” explained Walker. “Because dragonflies are aquatic, anything that happens in the water is going to have an effect on the species.”

An exceptional issue for the Pygmy Snaketail, however, is forestry activities. “Part of the reason we are looking for the Pygmy exuviae is because the adult is quite small and occupies the tree canopy as an adult. You’ll never see it eye level unless you can catch it returning to the water to lay eggs. So forest cutting can have a real detrimental impact on their species.”

Good stewardship of dragonfly habitat keeps the circle of life spinning. “Some people look at things in interesting ways,” smiled Walker. “And if people like birds they might look at dragonflies as bird food. And dragonflies are predatory and insatiable carnivorous insects –in the immature stage as larvae and as adults. They are not just feeding on mosquitoes and blackflies but any other insect they can catch on the wing. So dragonflies are certainly an important part of our food web.”

And like most people with passion pursuits, Walker is simply enamoured with dragonflies. “In my opinion they are a very fascinating insect in the world of entomology. And of course they are absolutely stunning creatures.”