Trending
You are at:Home»Economy»Gore Street Merchants Grim: Months of Street Construction Exact a Toll
By Steffanie Petroni on October 27, 2016 Economy

The Sault Ste. Marie community has been vocal for a number of years on the need to give Gore Street a second chance -spruce it up a bit, forgive its transgressions and remember the better the days. City Councillor, Matthew Shoemaker, expressed that when funding from the province and feds became available the City seized the opportunity to take the first steps in restoring Gore St. to its’ former glory.

“Gore Street used to be a vibrant business area in town. The idea was if we could get better sidewalks and a parkette and bring a sense of community to the area it might entice people to give it a second look. I think that will happen once the construction is complete,” remarked Shoemaker.

City Planner, Steve Turco, elaborated that taking on Gore St. as a project was a natural fit with the City’s efforts over recent years to improve the downtown neighbourhood.

“One of the approaches we’ve utilized is the notion of place making –of creating an environment or space that people feel connected to,” commented Turco. “Obviously Gore St. has had a lot of challenges over the last couple of years with vacancies and social issues that have been plaguing that area. So in looking for an overall strategy for downtown we felt -and it was validated through public open houses and surveys, that attention was needed on Gore Street. We had looked at doing a streetscape project for Gore St.” 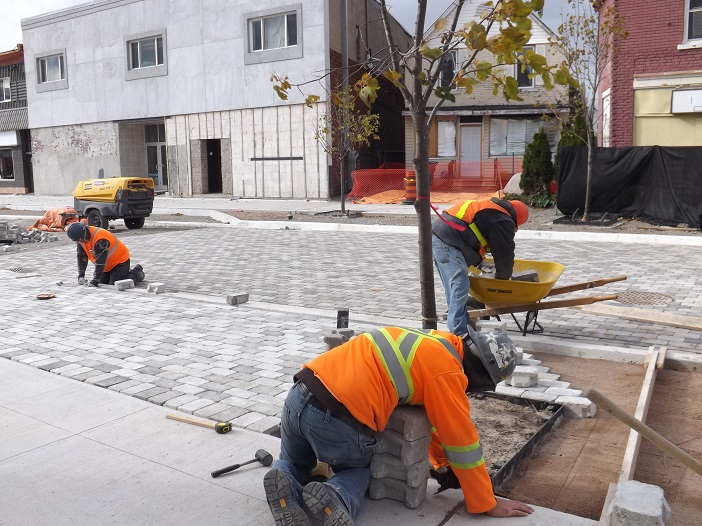 “When we investigated further we determined that a lot of the underground infrastructure was in need of upgrading,” explained Turco. “So the streetscape project was expanded to include the underground civil works as well as the asphalt. It was an attempt to create an improved aesthetic environment for Gore St. and to also address a civil works deficiency on Gore Street.” 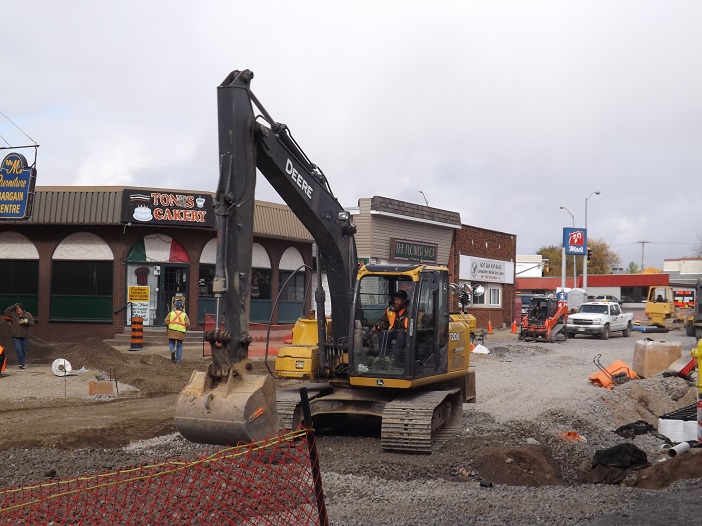 View from the Gore Street Cafe.

Construction on  Gore Street began May 1st, 2016 and an eighteen day extension establishes a completion date of November 18th, 2016.

“All the curbs, boulevards, sidewalks and trees would be complete and the first lift of asphalt would be done,” explained Turco. “We were trying to mitigate any delay in opening the street back up.”

City officials anticipate that the completion of the project will not only improve the functionality of the street but generate opportunities for investment from the private sector, increase patronage to existing businesses and stimulate a sense of community.

However, the catch-22 for some of the small businesses that compose most of Gore St. today, is that many may not survive the devastating effects seven months of construction has wreaked on their revenue to savour the rewards of the completed project. 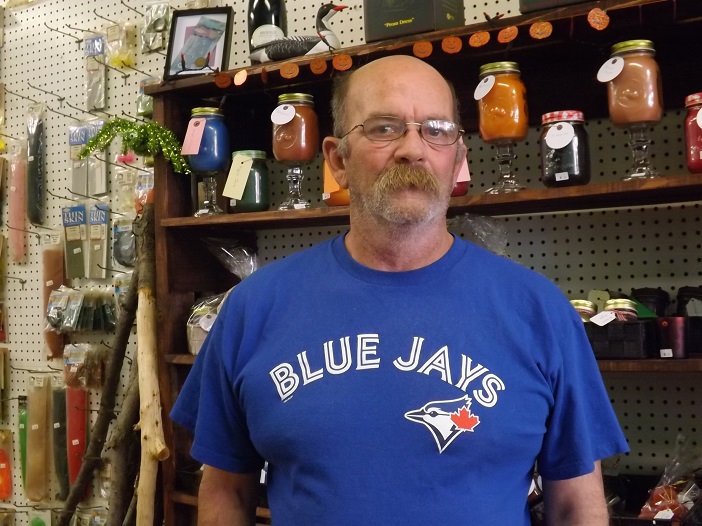 Brad Hodkinson, owner of Soo North Fly Shop, opened his storefront seven years ago. Hodkinson relocated from Southwestern Ontario and brought with him a healthy following of fishing folk. Hand tying every fly he sold and stocking his store with other fishing sundries, Hodkinson was thrilled as his business grew year after year. The success of his business is tourism driven but losing the street in front of his storefront to construction has netted Hodkinson an “80 to 90% loss in customers”.

“For the first three months of construction I saw four or five customers,” shared Hodkinson. “Now I have to be here seven days a week in case somebody walks through the door.”

The walls of his shop, once covered in Hodkinson’s flies are almost empty today. “I had a lot of Americans coming here to buy flies. And they can’t get here. Pretty simple. I tie every fly we sell. But why have thousands of dollars of inventory here for fly fishermen when they can’t get here?”

In addition to a few dozen of flies on display, Hodkinson has set up a small set of shelves to sell handmade scented candles in a desperate attempt to draw new customers to his shop –Soo North Fly Shop. He’s also pulled out his own personal collectibles –Boyds Bears, and added them to the shelves hoping to recover a fraction of what he invested in the memorabilia just to pay the bills.

Hodkinson is frustrated with the City stating that the construction on the road was like an ambush. “They never came to tell me what was going on. PUC told me what was happening. He tried to tell me that people knew but it was news to me. All of a sudden the street is closed and customers are telling me they can’t get to me.”

Turco and Shoemaker stated that before undertaking the Gore Street project there were myriad attempts to involve the community and Gore Street merchants.

“We did a tremendous amount of community engagement,” expressed Turco. “We had open houses with City planners and engineers, went door to door to all the businesses and talked to them about the construction, the nature of it and the benefits. We did a survey and in three days had seven hundred responses where we asked for comments on the plan.” 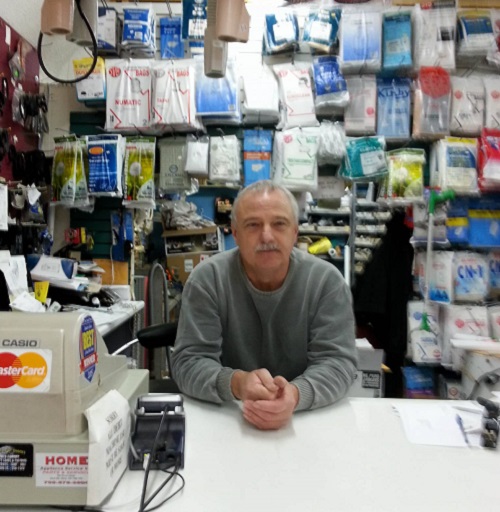 Owner of Soo Vacuums, Brian Van Scoy, set up shop on Gore Street over 30 years ago in 1984. Van Scoy agrees that the redevelopment work on Gore Street is necessary and acknowledged that many business owners contributed their ideas about what needed to be done. Van Scoy also expressed that he’s not entirely happy with the direction of the project lamenting the loss of traffic lights in favour of traffic slowing techniques and signage, and disappointed the idea of reintroducing two-way traffic is paused for the time being.

Van Scoy’s revenue has taken a beating during the months of construction on Gore Street. “My business is down about sixty-five percent. I’m losing fifteen to seventeen thousand dollars a month. I typically get about forty customers a day. Now I’m lucky if two to six customers come through the door in a day.”

Pointing out the closure of the antique shop next door, Van Scoy admitted that if Soo Vacuums wasn’t a specialty store the seven months of construction outside his shop door would have bankrupted his business. “I’ll go after hours and pick up vacuums, bring them back here and fix them, and drop off parts to customers. All of this I didn’t have to do before the construction. So that costs me more money for gas and time.” 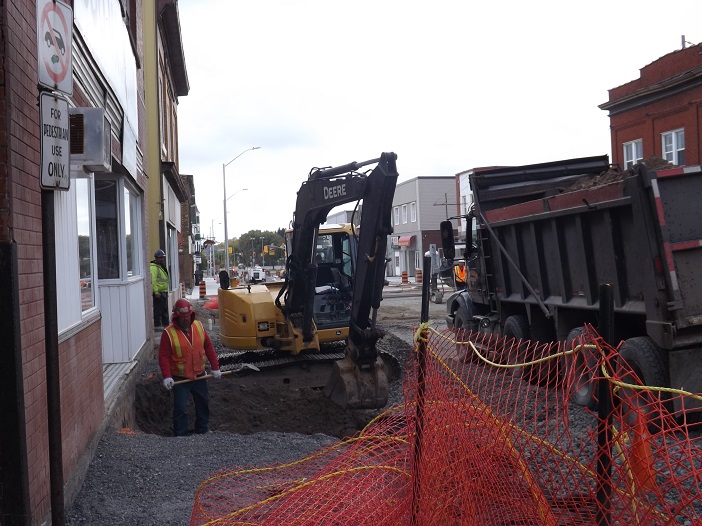 An impressive hole at the entrance of Soo Vacuums.

Van Scoy added that many of his customers are seniors and nervous about the construction and using alleys to get to his shop. “The media has given the area a bad rap. They don’t want to park in the back and use the laneways. And they don’t like all the big equipment and tractors on the street.”

Van Scoy’s loss of revenue resulted in the loss of two part-time employees a month after the construction began. Van Scoy has also lost one business day a week due to construction. “I’m not getting enough business with the road closure. I had to make a financial decision to close on Mondays. I was losing so much money.”

To add insult to injury Van Scoy received his tax bill this year that shows an increase of $398.12 for the year. With a wry chuckle Van Scoy remarked, “I’m already paying for these improvements that aren’t even done yet!”

Though struggling, Van Scoy is looking forward to the completion of the Gore Street project. “Hopefully the gain from the construction will pay off in the long run –which I think it will. I think after they get all the improvements done it will give the building owners a little bit of a push to get the buildings fixed up.”

In the meantime Van Scoy is enduring through personal sacrifice. “I’m going to survive the construction but I’ve had to make some lifestyle changes. I’ve gone from steak to hot dogs. You gotta do what you gotta do man.” 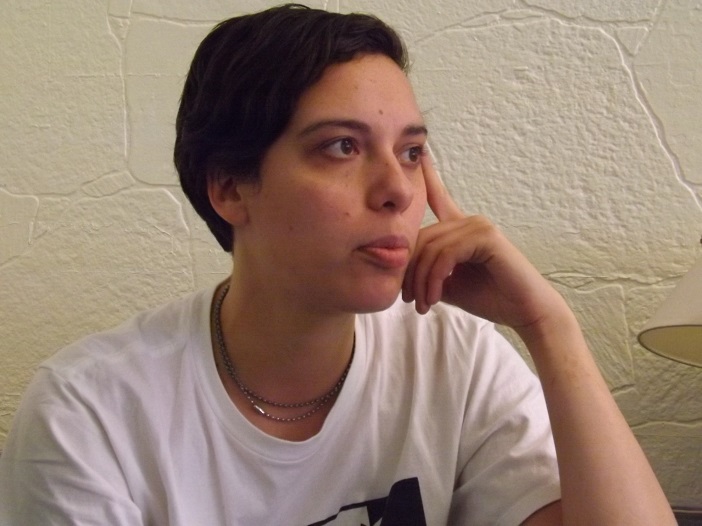 However, for Nicole Dyble, owner of the Gore St. Café, survivability is perilous these days. “For the first while I was trying to ignore it because I don’t have any control over it,” remarked Dyble of the construction in front of her Café. “But now I’m like ‘wheeeeeeen will this be done’? Things are pretty rocky right now. It needs to get better in the next month.”

The Gore St. Café, a for-profit business, is unique to the Sault for its Pay-What-You-Want business model. With the street ripped apart, Dyble is relying on her regular customers to keep her afloat.

“The construction has made it challenging to entice new customers to come in,” shared Dyble. “A lot of my regulars still do come in. I feel like people that have never been here just avoid this area of town. People don’t want to deal with the headache of it. If people are interested in seeing this place survive, come in. Come out for lunch, come out for events. We have a lot of good parking ten minutes from here. Walk or ride your bike. I’m still open six days a week.” 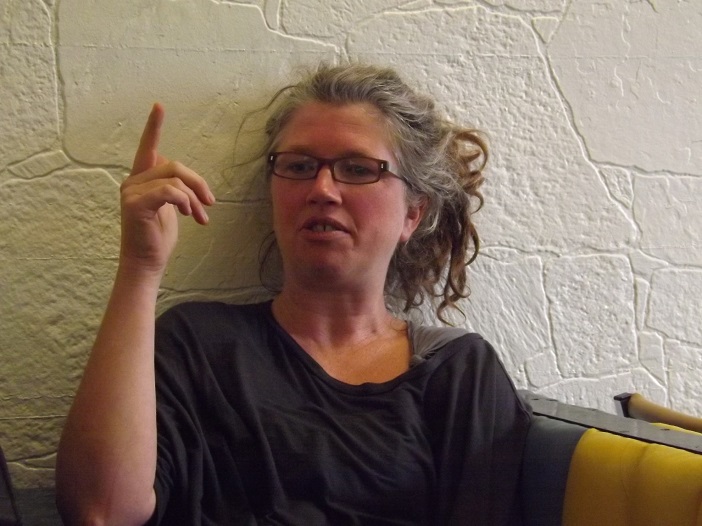 While interviewing Dyble, a customer at the Café contributed her thoughts to the conversation from a tourist perspective. Arjenna Strong was travelling through the Sault in May and hoping to stop in at the Café. Strong operates a website that features alternative economy businesses- like Dyble’s.

“I wanted to stop in and I didn’t because I drove around downtown for about half an hour not being able to find the Café because every time I took a turn there was construction or a one-way street. It was unbelievable and I just gave up. On my way through this time, I gave myself a huge chunk of time. I was going to find this place if it killed me.”

“I’m glad it didn’t kill you,” said a deadpan Dyble.

“That’s the nature of infrastructure,” commented Turco. “But it would be nice if the projects worked out so that they didn’t create such a large barrier.”

Dyble acknowledges that the completion of the project will “look really nice”. “I hope it positively impacts things and people want to see the new street.”

But Dyble is also skeptical that trees and patios address the hardship on Gore Street. “I don’t think it necessarily addresses the root causes of the challenges of this community. The challenges of the downtown in general -stigma, poverty, people embracing change and new business. Derelict buildings. Slumlords.”

Turco was empathetic towards Gore Street merchants, the small business owners that seem to be the collateral damage in all of these improvements -the sacrifices for the greater good.

“We understand the nature of road reconstruction is a challenge for existing businesses and it’s a challenge for property owners that are looking to rent space,” commented Turco. “But it was felt that if we did nothing then those businesses and property owners on Gore Street would be even further impacted because the street and the area would continue to deteriorate. Our intent was to be seen as a leader in taking proactive initiative, to demonstrate that the City felt that this area was important. If we didn’t intervene then there would be no incentive for the private sector to have the confidence to reinvest in that area.”