Trending
You are at:Home»Economy»Fraud 101
By Steffanie Petroni on February 17, 2015 Economy

Like many who commit crime, the white collar criminal blends appropriately into their environment. They dress well, hold an impressive set of credentials, dazzle with a sophisticated charm, pair wine varieties like a seasoned sommelier and they do a good job. And beneath this oft referred to ‘mask of sanity’ is an indifferent and calculated predator, sometimes more kindly called a ‘con artist’ or a ‘fraudster’. For the purposes of this article the term ‘fraudster will be employed.

But first a couple of definitions.

White collar crime is non-violent crime that is committed by someone, typically for financial gain. The typical white-collar criminal is an office worker, business manager, fund manager or executive. Fraud is defined as involving intentional acts and as perpetrated by the individual using deception, trickery, and cunning that can be broadly classified as comprising two types of misrepresentations: suggestion of falsehood and suppression of truth.

A 1979 paper entitled Social Change and Crime Rate Trends: A Routine Activity Approach, published by American Sociological Review and prepared by Cohen and Felson, indicates that “white collar crime like other crime, can best be explained by three factors: a supply of motivated offenders, the availability of suitable targets, and the absence of capable guardians –control systems or someone ‘to mind the store’ so to speak.

A summary laid out by the Australian Institute of Criminology breaks down fraud into four sub-sections:

In a review about the psychology and sociology of fraud the author, Sridhar Ramamoorti, states, “Behavioral scientists have failed thus far to identify a well-defined and well-understood psychological characteristic or a set of characteristics that are diagnostic about fraud perpetrator propensity.”

However, various experts agree that there are five of numerous traits that when possessed to an average degree that an individual would be characterized as ‘normal’. Those traits are: conscientiousness, agreeableness, emotional stability, openness to new ideas and extraversion. It has been found that when the qualities of conscientiousness and agreeableness are lacking that a greater risk to be dishonest is present.

As well, in a chapter from his book, Dishonest Dollars: The Dynamics of White- Collar Crime, Terry Leap addresses potential underlying disorders that could influence an individual towards crime. “Popular belief holds that most criminals, including white- collar offenders, have some sort of personality disorder that drives them to embezzle, cheat on their expense accounts, misrepresent their organization’s financial condition, engage in insider trading…Few white collar criminals are diagnosed with full-fledged personality disorders. However, there are two disorders that psychologists and other experts believe can explain the behavior of some fraudsters.”

And those disorders are:

Antisocial personality disorder. People with this mental defect—formerly known as sociopaths or psychopaths— have a history of criminal, corrupt or extremely irresponsible conduct. People with severe antisocial personality disorder may be prone to such heinous acts as murder, while mildly afflicted people are more likely to be noted for chronic physical or mental abuse of family members, co-workers or subordinates…as well as substance abuse, dishonesty, fraud and theft.

Narcissistic personality disorder. Narcissistic people are known for their extreme self-centeredness and over-sized egos. They have delusions about their importance and see themselves as extraordinarily brilliant, powerful and accomplished. At the same time, they have the unpleasant habit of belittling the accomplishments and contributions of others. They have a sense of “entitlement”— to everything from the top job, to obscenely rich compensation packages to access to the “movers and shakers” of the political, business and social elite.

Leap also states that “to be a successful fraudster, it usually helps to have above average intelligence and more education than those trying to catch you.” Leap adds that fraudsters also possess: a special set of skills, such as superior accounting skills; a penchant for risk; a tendency towards dishonesty; and a lack of integrity.

But being a fraudster isn’t easy. To be good at the game the fraudster has to play a few of their own psychological games with themselves. Rationalizing is a critical component of the fraudster’s persona and enables them to dissociate with the harm that they are inflicting upon their unwitting victims. This is a conclusion of fraudsters that led to the development of the fraud triangle.

Referring back to Ramamoorti, “the fraud triangle is loosely based on what policemen and detectives have referred to as ‘means, motives, and opportunity.’ Widely disseminated by the Association of Certified Fraud Examiners, the fraud triangle has three elements:  Perceived Incentives/Pressures, Perceived Opportunities, and Rationalization of Fraudulent Behavior. 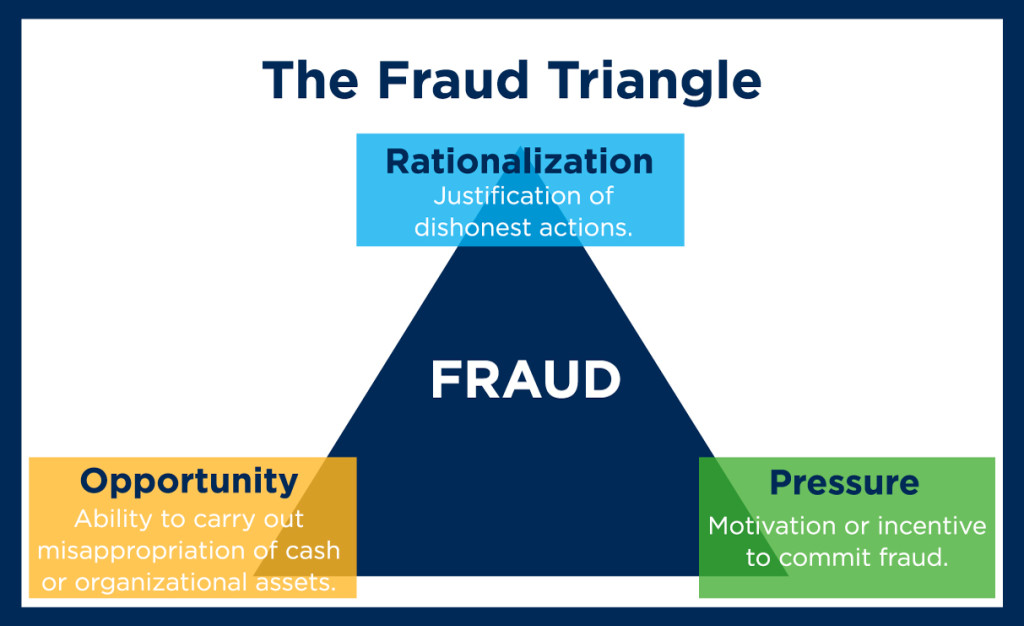 Not surprisingly, all three elements of the fraud triangle are influenced by the fraud perpetrators’ psychology. After all, personal incentives and perceived pressure drive human behavior, and the need to rationalize wrongdoing as being somehow defensible is very much psychologically rooted in the notion of cognitive dissonance.”

Cognitive dissonance occurs when an individual experiences two sets of conflicting values- hence the need for fraudsters to rationalize their behavior. “Nobody is getting hurt” or “I’ll pay it back when things turn around” or “I’m undervalued at work and I deserve this” are just a few examples of a fraudster’s rationalizing self-talk.

Uncovering fraud be it in one’s personal life or within a corporation is a challenge. Even auditors are trained to find unintentional accounting errors but the fraudster is methodical and painstaking in covering their dirty deeds. As Ramamoorti so eloquently states, “Even the common expression ‘where there’s smoke, there’s fire’, may not quite apply, because the fraud perpetrator may introduce a smoke screen or otherwise stamp out the smoke, leaving no tell-tale evidence of fire. We should heed the quip used by scientist engaged in the search for extraterrestrial life: ‘Absence of evidence is not evidence of absence.’”

For a no holds bar tell it like it is account of fraud and fraudsters be sure to check out Sam E. Antar, Con With A Conscience: Decoding the Deception.