Trending
You are at:Home»Raw»Crown Attorney Carpools with Star Witness to Sault Ste. Marie Courthouse
By Steffanie Petroni on March 22, 2016 Raw

Poor Judge Varpio. It was a dizzying day of testimony presented by star witness, Karen Querat, in the trial of OPP Constable, Glenn McLean. One is compelled to wonder if Varpio wishes this was a trial by jury.

Perhaps the most fascinating information to be exposed over the day is that Querat and Timmins Crown Attorney- Wayne O’Hanley are carpooling together as they travel from Sudbury to Sault Ste. Marie. Heading towards the Sault yesterday, the pair took an overnight break in Elliot Lake –both to respectively visit and bunk in with their moms. Querat and O’Hanley are also staying at the same hotel in the Sault during trial this week. These situations are not only unusual but further problematic given that Querat is also in cross-examination by the defense. The Crown and the witness are not to discuss the case, evidence presented during trial or counsel’s cross-examination. The arrangement begs the question ‘what does the pair talk about during the long ride or maybe at the hotel when Court is in recess for the day’? An early start this spring for carrot and pea planting? The impending legalization of marijuana in Canada? Or perhaps the latest episode of A&E’s ‘Bates Motel’?

Since Querat’s last appearance in the Sault Ste. Marie courthouse, a warrant for her arrest was issued by Timmins Police. Related to another former relationship with a guy named Doug Perrault, Querat was charged with 2 counts of theft under $5,000; 1 count of making a forged document; and 1 count to use, deal or act on a forged document. Simply, Querat is charged with forging a cheque from Perrault. What is equally fascinating to the former observation above, is that Timmins Crown Attorney, Wayne O’Hanley, has not charged Querat with breaking her conditional sentence but rather has issued a summons to appear –through the mail.

Querat, also known as Karen Bedard, was arrested on November 20th, 2013 and pleaded guilty on August 8th, 2014 to charges of fraud over $5,000 – $129,927.74 to be exact. Querat, the former bookkeeper for Blind River’s Anishnabie Naadmaggi Gamig Substance Abuse Treatment Centre (ANGSAT), nicked 20,000 bucks from the centre between August 2012 and January 2013. The remaining $110,000 in misappropriated funds was embezzled after meeting her boyfriend, OPP Constable, Glenn McLean, on January 29th, 2013.

Querat has alleged that McLean was a party to the embezzlement. On October 13th, 2015, McLean appeared before Superior Justice Michael Varpio, at the Sault Ste. Marie Courthouse where he pleaded not guilty to 26 charges that ranged from stealing office supplies- an intoxilyzer and 33 liters of gas, to assault and threatening assault on Querat, to pointing a firearm, to fraud and theft from ANGSAT.

For ten months the couple lived it up attending myriad rock concerts, a couple of trips to Jamaica and Las Vegas, and splurging on grown-up toys that included a 4-wheeler, a new car, canoe and firearms –two pink camo shot guns for her please! The hot dough was also applied to household bills, shopping sprees and the small luxuries in life –like the better bottle of wine.

Related: Ex-Lover Attempts to Shred OPP Constable in Fraud Scandal: Serving the Public Interest or Making a Mockery of the Public?

Entering the seventh day of her cross examination by lawyer for the defense, Bruce Willson, Querat, dressed in a navy blue pin stripe pant suit, lilac blouse and black heels, appeared fatigued. In the same vein, McLean, of modest stature, appeared in a pale blue dress shirt, top button undone and seemed energetic while mingling with his supporters in the courthouse halls.

Surely heads were spinning in the courtroom as Willson peppered Querat in his cross examination. Querat’s presentation of evidence oscillated from exhilarating animation to sudden crashes in energy, where her voice would weaken and her face crumple. Querat recounted allegations of physical violence, saying of alleged punches upon her head by McLean, that he allegedly said he struck her only on her skull because evidence of the alleged attacks would be hidden. Attempting to divine a timeline of these alleged occurrences, and after many inconsistent replies from Querat, Willson dropped his head into his left hand and with his voice on the verge of near tears, he begged of Querat a straight answer. For those sitting in the courtroom it may seem uncertain that Willson was successful in his quest.

There was a lengthy and riveting account of an allegation where Querat says that McLean pulled a lawn chair out from under her, whereby she landed on her butt and felt bruised by the event. But the burning question, beaten to death like a dead horse, ‘where did he grab the chair? Where? From the front? The back? The side?’ was almost impossible to answer. Judge Varpio, not for the first time, dropped his now pink face, into both of his cupped hands, to prop his chin. 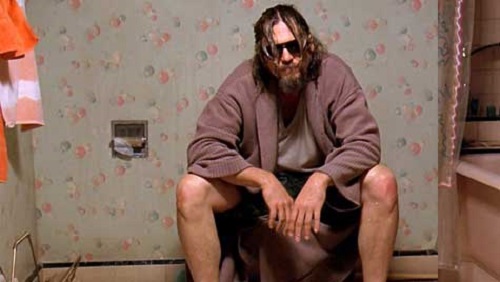 The day ended on an allegation, by Querat, that the couple, while in Las Vegas set out to purchase a little weed. Querat claims that McLean wanted the dope and so they set out to find it. Querat’s account of the occasion sounded like an Indie script – the couple hit the streets of Las Vegas looking to liven things up with a little ganja, they met a guy with a pot connection but he was suspicious of McLean because “he looked like a cop”. The couple was taken on a looong walk along the Vegas strip, eventually entering “gangland” territory and the couple was forced to light one up with the “drug dealer” who wouldn’t sell until McLean smoked a green crayon to prove he wasn’t a cop. Then, according to Querat, “the guy wouldn’t leave us alone. He wanted to hang out with us all night.” Now, all of this begs the second question of the day. Was “the guy” The Dude?

So where does this cliff hanger dangle? Why back in the hotel room later that night, midnight to be more accurate, and where Querat claims to have had an attack of the munchies and so sets out to roam the Palazzo for a burger.

“Miss Querat, I’m tired,” interrupted Judge Varpio. “I have to have a discussion with Counsel. Why don’t we see you tomorrow at 9:30 a.m.,” he concludes.

Trial continues into Tuesday and Wednesday this week and Tuesday to Friday next week at the Sault Ste. Marie courthouse. Remember, it’s B.Y.O.P. –bring your own popcorn.