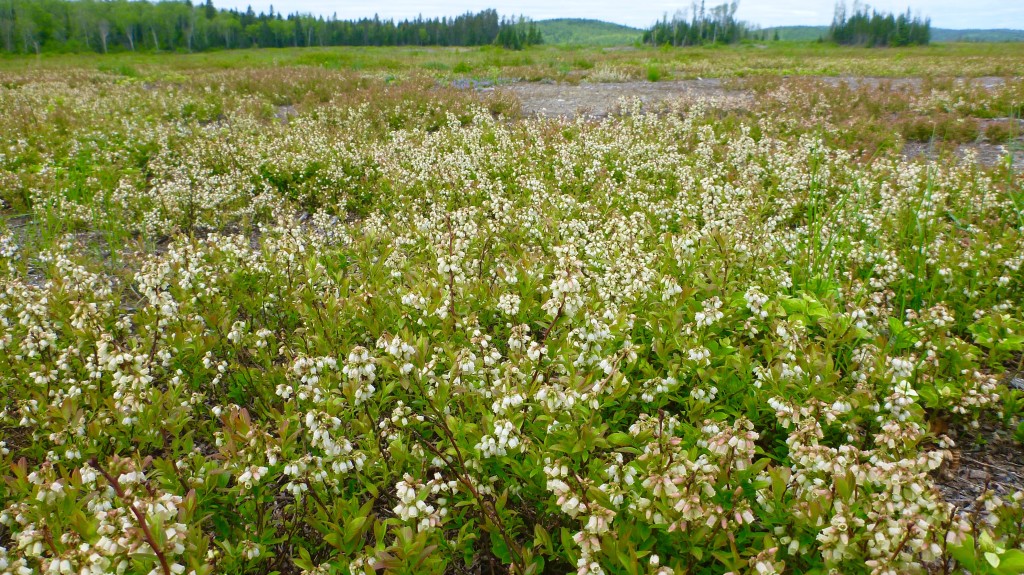 Trevor Laing found his thrill in the Algoma highlands. Across 350 acres of his 640 acre property, luscious blankets of wild blueberries spread across his farm and winery, six more acres covered with strawberry patches, raspberry bushes and haskap plants, all surrendering their heavenly sweet scents to the air.

Laing and his wife, Tracey, established their Algoma Highlands Wild Blueberry Farm and Winery in 2011 selling fresh and frozen blueberries. In 2013, the family farm expanded their product entering the value-added market with jams –homestyle and jalepeno, barbeque sauce and syrup created with 5 varieties of low bush blueberries that flourish on the farm. This year the Laing’s are kicking it up a few notches, becoming vintners of the only blueberry wine, produced from field to bottle, in Northern Ontario.

The word ‘wine’ derives from the Old English win, which derives from the Proto-Germanic *winam which was an early borrowing from the Latin vinum, (which can mean either the “wine” or the “vine”), from Aeolic Greek Fοίνος, (woinos) and from earlier languages such as Hebrew. 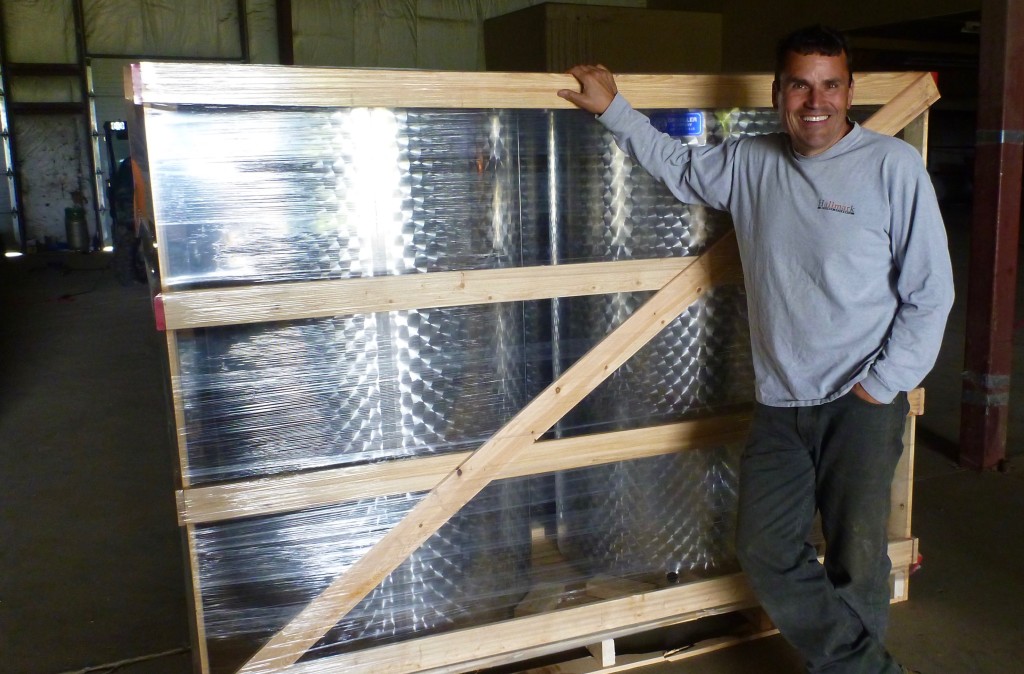 Laing and his fermenters. Winery production is underway this year and will be available for purchase in 2017.

Wine is most commonly associated with the fermentation of grapes- the only fruit that does not require additional sugars, acids, enzymes or other nutrients to ferment. Though contentious among oeonolgists, wines not made of grape have a long history that scientists have traced back to 8500 B.C. in places like Turkey where ancient pottery discoveries indicated traces of tartaric acid, a common wine residue. The earliest wines were made from honey (mead) and berries. And though fruit wines are still fighting for a little R-E-S-E-P-E-C-T in North America, Asians –China and Japan, and Europeans- Ireland, have loved their plum wines for centuries. 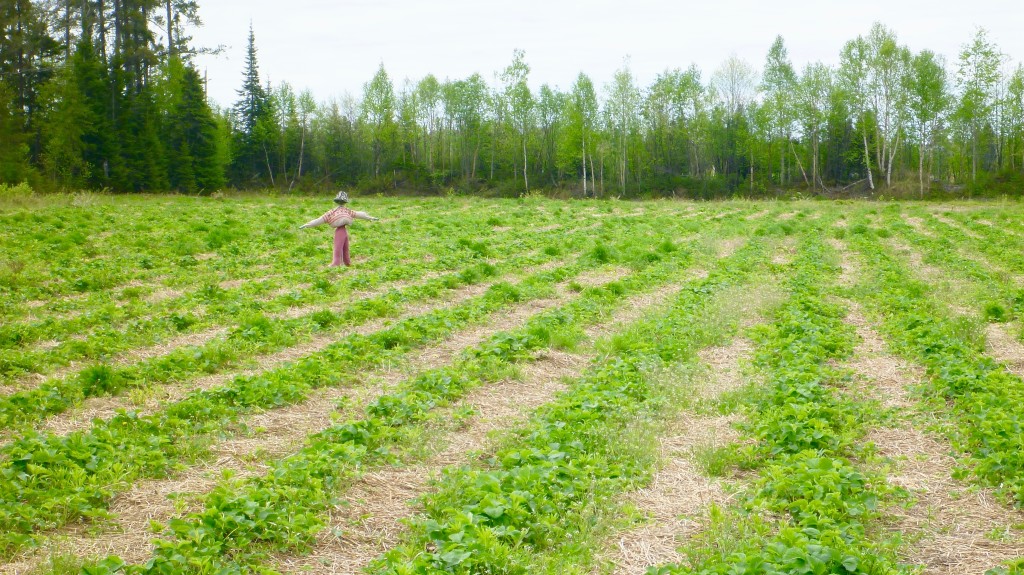 Not just about the blueberries -the farm supports a u-pick strawberry patch, about 5 acres, in addition to about half an acre each of raspberries and haskap berries.

The sale of grape wine is a significant economic contributor to the province. In 2015 the total revenue generated through the sale of wines totaled nearly 800 million dollars. Wages created through the business of wine totaled an astounding 3.34 billion dollars in Ontario including remuneration provided through wineries, liquor boards, restaurants, retail stores, vineyards, tourism, trucking/warehousing and education/research/consulting. An average bottle of Ontario wine sold generates $27.38 of business revenue, $5.29 of tax revenue and $7.06 of wages.

Though fruit wines comprise less than 5% of the total production of wine globally, its production is becoming more refined and on the rise. 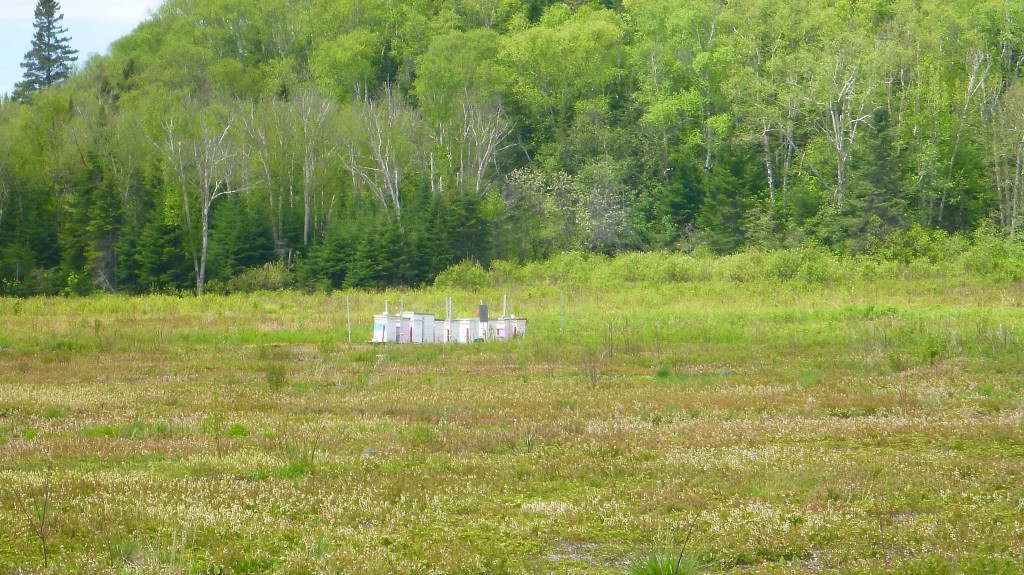 About 30 hives, each housing 40,000 bees, are located throughout Laing’s property – a bit of pollinating insurance.

Located on the site of a former nursery, the farm produced 150,000 lbs of wild blueberries from 160 acres of field last season. Each year Laing cuts back about half of his blueberry acreage to yield larger numbers of fruit the following year. Harvest usually begins mid-July to early August. “Up here we say the puck drops,” remarked Laing. “We only have about twenty-one days to get the harvest in.”

This season about 1,000 lbs of blueberries will be diverted to five 1,000 litre fermenters until 2017 –that’s when lovers of fruit wine can anticipate their first sip of the sweet treat. Laing estimates that he’ll produce 1500 bottles of wine next year- a trial run. But don’t worry, Laing and his small team have already been experimenting with test batches. 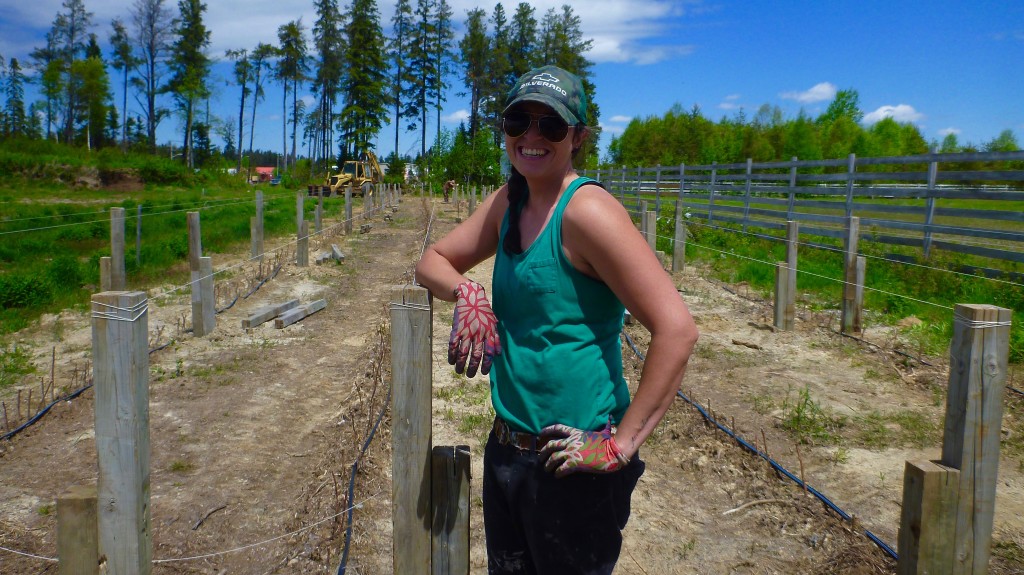 Mandi Ramdhaine, came onto the farmer as a picker a couple of years ago but her zeal for the work impressed her employer who sent her off on a tour of winery’s in B.C. and paid for her online courses through Viticulture Enology Science and Technology Alliance. Ramdhaine followed up her course work with a placement at Johnston’s Cranberry Marsh & Muskoka Lakes Winery in Bala Ontario.

“Mandy put up quite a few batches. Most ended up down the drain but we definitely have some winning formulas,” remarked Laing. “We don’t intend to put out something that is only going to sell once.”

Situated along the trans-Canada highway and with the Voageur Trail and Magpie Falls bordering the farm, Algoma Highlands Wild Blueberry Farm and Winery is ideally located to draw tourists. 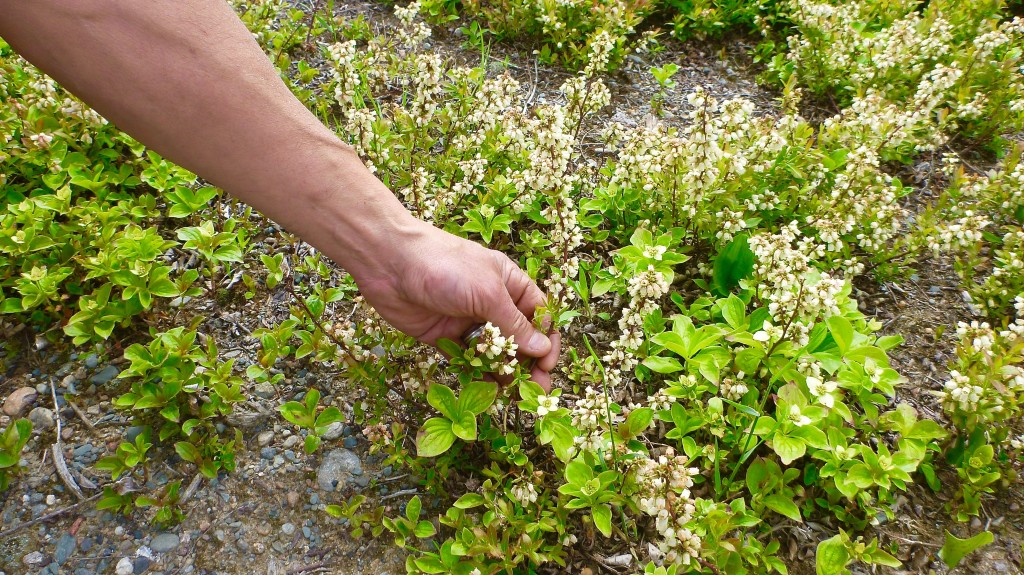 One of the five varieties of low bush blueberries located on Laing’s farm.

On the sustainability of the farm and the addition of the winery Ramdhaine commented, “I think it’s going to a huge success in terms of small scale economy in Wawa. I think it will bring in a bunch more tourism. They’re going to see that we’re a winery, we’re established. We actually care about what we are producing. On a larger scale we hope to get out there in Canada but were going to be happy to start on a smaller scale.”

Though wine won’t be ready until 2017, Laing aims to complete the construction of the winery mid-July. Plans to open a store front to sell his product are also in process. Laing is bypassing the LCBO route and selling his wine on site and online.

Duncan Gibson, Director of Finance with the Wine Council of Ontario, admits that the advantages for vintners of fruit wine, selling through the LCBO has a few drawbacks. “Fruit wines have been listed in the LCBO for years but it’s a real niche product. There is a wholesale price selling through the LCBO that is much more favourable for VQA wines. Fruit wines don’t enjoy those same advantages and that’s always been a source of contention for fruit vintners. It’s not because they were intentionally omitted, they were just so low on the radar that they weren’t thought of. When the government was considering policy, fruit wine just wasn’t moving the needle enough to be considered.” 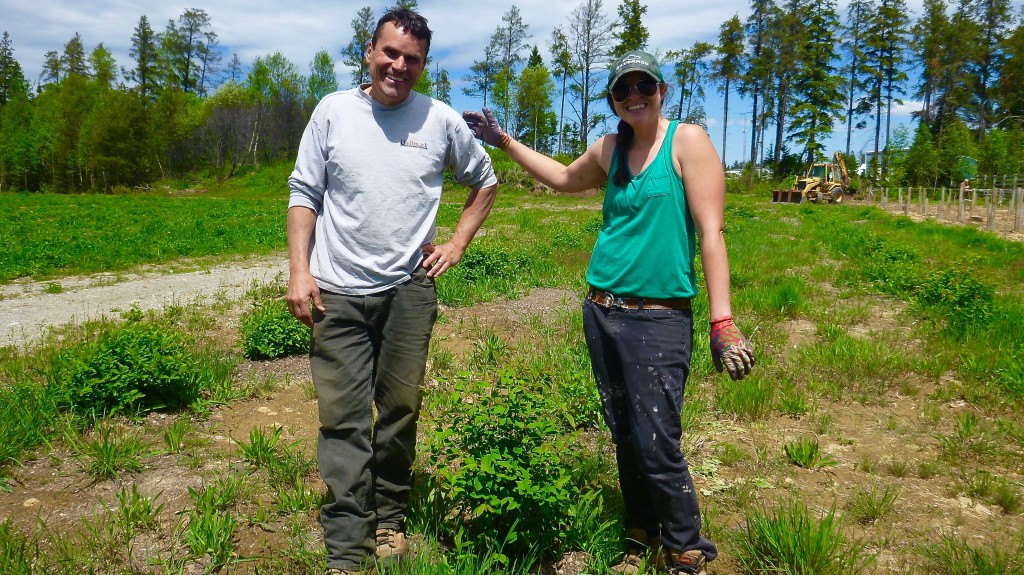 Laing and Ramdhaine, in the haskap patch. The introduction of the haskap plant is a provincial initiative. Laing was one of a handful of farmers approached by the province to experiment with the plant.

But, as Gibson, pointed out, the Alcohol and Gaming Commission has begun accommodating fruit wine into policy development. This winter, the province of Ontario announced that wine, cider and fruit wines will be carried in some grocery stores beginning the fall of 2016.

Also, pilot project allowing the sale of VQA wines at Farmer’s Markets has been extended to include the sale of fruit wine this year. Gibson concedes that the criteria to sell wines at Farmer’s Markets are somewhat restrictive. Wine products must be returned from the Farmer’s Market back to the winery within a 24 hour period. The condition is an attempt to control the establishment of additional retail outlets that sell alcohol. In other words –only the LCBO is permitted to operate a storefront 7 days a week.

Unlike grape vintners, the geographical range and small numbers of fruit vintners challenge their formal organization of a trade association. “Fruit wineries tend to be smaller family farm operations so they tend not to be as sophisticated and they are more far flung. It’s easy for a grape vintners in Niagara to get together. But it’s hard for the fruit vintner in Wawa to know what is going on in Ottawa or Kingston,” remarked Gibson. 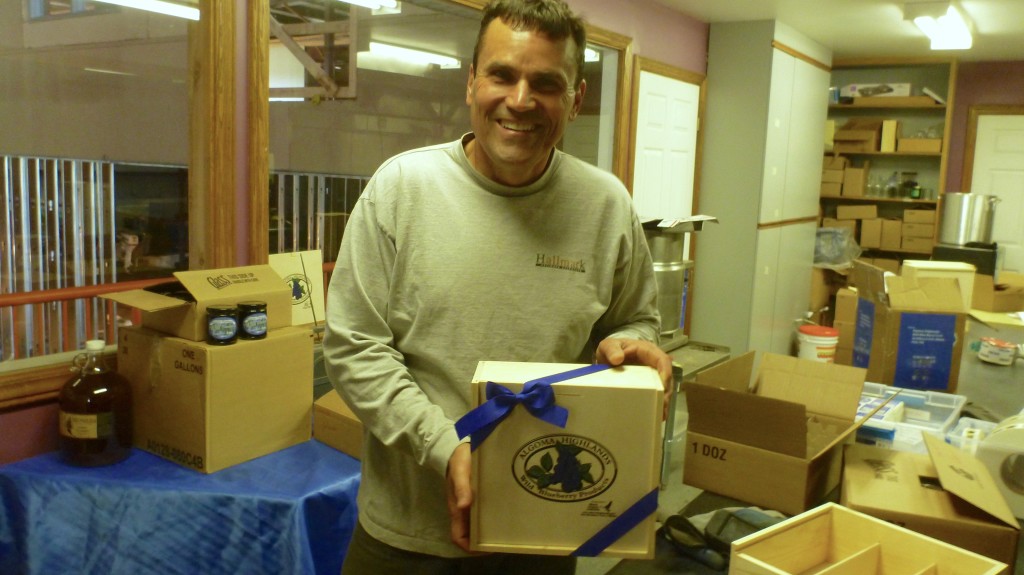 Jams, BBQ sauce, syrup, fresh and frozen blueberries and soon, blueberry wine, can all be purchased on the farm.

Provincial regulations allow Laing to produce up grape wines up to 20% of his total wine production, though Laing doesn’t foresee that happening anytime soon. “We just don’t have an advantage to compete with grape vineyards,” remarked Laing adding, “And our customers love our blueberry products. We want to expand on our value added goods.”

Laing anticipates this years’ crop of blueberries will be harvest-ready by mid to late July. Frozen blueberries as well as Laing’s blueberry creations –which are absolutely delicious (the blueberry BBQ sauce can be enjoyed straight from the bottle, I know firsthand), can be picked up at the farm.

It’s hard not to notice Laing’s bursting pride when he tours you about the farm. “I love it here, we love it here. We want everyone to come here and enjoy our farm –just like we do every day.”