“According to all known laws of aviation there is no way a bee should be able to fly. Its wings are too small to get its fat little body off the ground. The bee, of course, flies anyway because bees don’t care what humans think is impossible.” ~ Bee Movie, 2007 A bee colony is made of three adult bee types- the Queen, the drones and the worker bee. The Queen’s job is to populate the hive, the drones hang around the hive and mate with the Queen all day and then there’s the worker bee. Worker bees are female and her life’s work is a livelihood for a commercial farmer, both the honey producer and the crop farmer; a pollinator for flowers; and for urban beekeepers, an issue of food sovereignty and food security. She will spend her entire life to produce 1/12th of a teaspoon of honey. Beekeeping in Ontario is regulated by the provincial Bees Act.  According to Mary Eaton, the Algoma Beekeeper Association has almost 50 beekeepers in rural Algoma that are affiliated with the group. She acknowledges there are other beekeepers in the area that may not be members of the collective. With the exception of 4 or 5 beekeepers most are keeping hives to put honey on the table and to increase the number of pollinators in their yard. Mary herself keeps several fruit bearing trees and gardens that thrive with the help of the honeybees from her seven hives. She attributes last summer’s successful garden to her busy bees. “I had so many cucumbers and zucchini’s last year that I had more than I could share.” Eaton recalls having to hand pollinate much of her vegetable garden in the years prior to keeping bees. In the city of Sault Ste. Marie, there are an undisclosed number of underground urban beekeepers who are secretly keeping beehives. These rogue urban beekeepers live quietly among us, managing their hives and sharing their honey with family and friends, and sometimes their neighbours too. Section 19 of the Bees Act states that, “No person shall place hives or leave hives containing bees within 30 metres of a property line separating the land on which the hives are placed or left from land occupied as a dwelling or used for a community center, public park or other place of public assembly or recreation.” It is this stipulation that has local beekeepers engaging in the clandestine affair of backyard honey making. The City of Sault Ste. Marie was engaged to examine the issue of urban beekeeping. Upon completion ofthe review the Council was advised that, “The Municipality cannot pass a local by-law that is inconsistent with Provincial Legislation, in this case the Ontario Bees Act, and more specifically Section 19, of the Bees Act which requires hives to be setback at least 30 meters from any lot line.” In Sault Ste. Marie beekeeping is restricted to areas that have a rural agricultural designation. In section 1.3 of the City’s zoning by-laws beekeeping is defined as general farming.

Laura Wyper applies a holistic approach to everyday living. She has a strong sense of environmental stewardship and her background includes experiences in midwifery, prenatal nutrition and food security issues, just to name a few. Most recently Laura has taken up beekeeping and harvesting honey for her family and friends. Though it has only been two years since she started keeping hives Laura has become a vocal advocate for urban beekeepers. She is currently undertaking a body of research in conjunction with NORDIK Research Institute regarding beekeeping and the public’s reaction to bees. As well, Laura has been communicating with the City of Sault Ste. Marie about the by-laws that prohibit beekeeping to keep within the 100 feet from property line regulation as outlined in the provincial Bees Act. Laura commented, “The reality is that in this province and across North America there are a lot of cities that don’t change their by-laws around urban beekeeping but they let it happen. The Ontario Ministry of Agriculture, Food and Rural Affairs control the Bees Act and they don’t necessarily police their own act.”

Susan Murray, spokesperson for the Ministry of Agriculture and Ministry of Rural Affairs, supports Laura’s sentiment. Murray states that separation distances of hives from property lines are in place to ensure bee health and human safety but admits that, “The separation distances are enforced primarily on a complaint basis. At this time, the ministry is not considering changes to the requirements for separation distances.” Laura questions the practicality of the 100 foot perimeter stipulation in the Act and points to Vancouver’s beekeeping by-laws as an example. “Vancouver didn’t think that the 100 foot stipulation was the right way to do things. So what they implemented for urban beekeepers was a by-law that stated the need for a fence or hedge 6 to 8 feet high or that the beehive itself had to be that high. This means that when bees are coming to and from the hive they are flying up and over your neighbour that’s gardening or sitting on their deck. Vancouver also mandates that an adequate provision water supply be on site so honeybees aren’t turning up in residential pools and also regulating the number of beehives allowed per residential lot.” British Columbia’s Bee Act regulates registration, disease management, managing of swarms and other processes but it does not set out a provision for separation distances of hives from property lines. This allows cities like Vancouver to take a more proactive approach when developing their by-laws in respect to urban/hobby beekeeping. Back in Ontario, however, the City of Toronto has witnessed a surge of interest in urban beekeeping over the past few years. A growing number of Torontonians are keeping beehives in their backyards, on their balcony’s and even rooftops. The Royal York Hotel unveiled their rooftop beehives two years ago and the Canadian Opera Company boldly followed suit this year. As well urban beekeepers in Toronto have organized and widely publicized their beekeeping collectives and Urban Beekeeping workshops. When senior communication coordinator for the City of Toronto, Tammy Robbinson, was asked to explain how the City has managed such a blind eye to the violation of the provincial by law her short answer was simply, “Beekeepers are regulated by OMFRA. The City of Toronto leaves the monitoring to the province.” Toronto does not have any “bylaws restricting the keeping of bees on a residential property, provided that the hives are for personal use.” 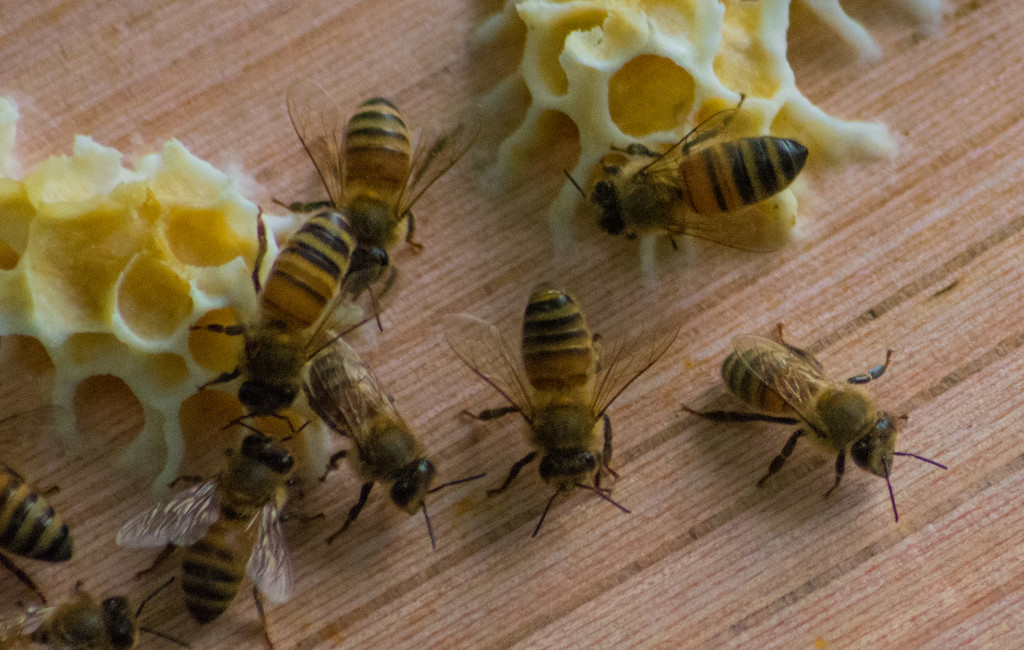 Laura believes that the environmental and health gains derived from beekeeping are linked. “This is a food sovereignty issues and it is about our right to feed ourselves. It’s also a food security issue in terms of open food supplies and it is a big issue in terms of pollination.” With the declining populations of bees it may be the urban beekeepers that help with a resurgence in honeybee numbers. Laura speculates that City by-laws prohibiting the use of insecticides reduces the risk that urban honeybees will be exposed to deadly chemicals. In the 2012 Ontario Provincial Apiarist Annual Report it is stated that, “During the spring of 2012, from mid April to June, there were multiple reports of beekeepers throughout Ontario experiencing bee kill in their honey bee colonies. The symptoms documented and reported by beekeepers were characteristic of acute pesticide poisoning (large piles of dead bees in front of the colony, trembling, shaking and atypical behaviour displayed in bees). In most cases, damage was reported in close proximity to treated corn seed that was planted. The growing trend in this type of kill off among honeybees has spurred the Ontario Ministry of Agriculture of Food and the Ontario Ministry of Rural Affairs to develop a set of best practices in an attempt to mitigate the incidents of honeybee deaths as a result of insecticides and other harmful chemicals used in farming. Other differences between urban beekeepers and commercial beekeepers may also contribute to lower kill rates among honeybees. Laura points to overproduction and mono-agriculture additional reasons for this. “Commercial beekeepers are very much into honey extraction because it’s a money venture. They take honey away and feed them sugar water rather than letting them forage naturally. Also another point is that the mono-agriculture system means that bees have thousands of fields of just one crop that produces for just a short time during the season and then they don’t have food for the rest of the year. In the city we have backyard gardens and everybody landscapes. Sometimes there is a lot more food for bees in the city as a result.” 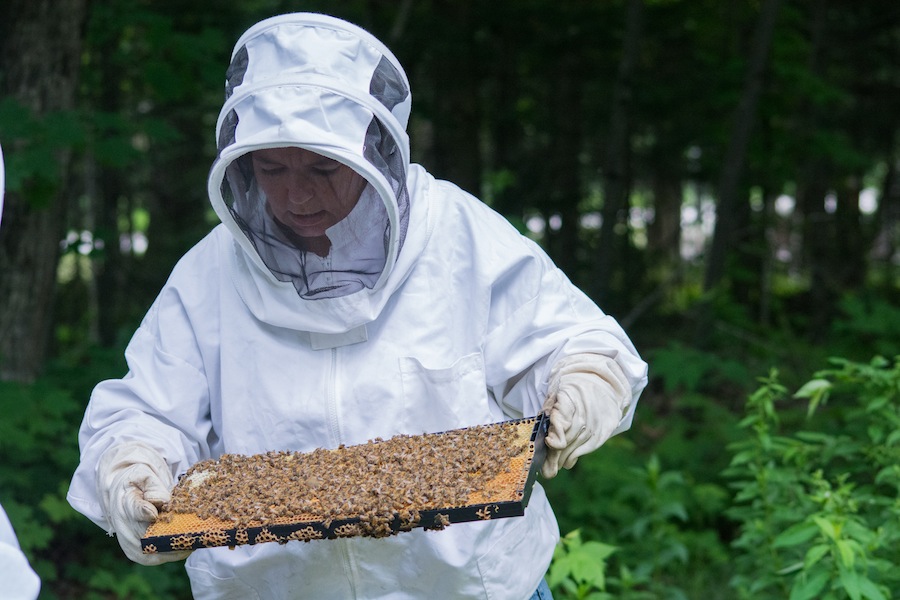 Recognizing that bees can cause anxiety for some people Laura organized a series of workshops over the month of July to educate interested community members about the busy little honeybee. Her classes soon filled up with little advertising. Laura sees this as a strong signal that more people are becoming interested in beekeeping. Common public fears around the honeybee encompass images of massive bee ball swarms clinging to a lamp post or a car, and the threat of bee stings. “What people don’t understand is that when the bees are swarming this is when they are least likely to attack because this is when they are most vulnerable. The bees are all clustered around the Queen trying to keep her safe while the scouts are out looking for a safe place to start a new hive.” Laura also points out that in larger cities like Toronto and Vancouver, hobbyist beekeepers can advertise their services to aid in instances of swarms. Regarding the concern around stinging honeybees Laura commented, “Honeybees are vegetarians. They’re not carnivorous like hornets and wasps. The worker bee may sting but only if she feels threatened. The drones don’t even have stingers. The Queen does but she rarely leaves the colony.” A 2000 World Health Organization reports that in the USA 54 deaths were attributed to bee stings out of a population of 281 million. It is uncertain as to how many of these deaths are related to stings from honeybees. 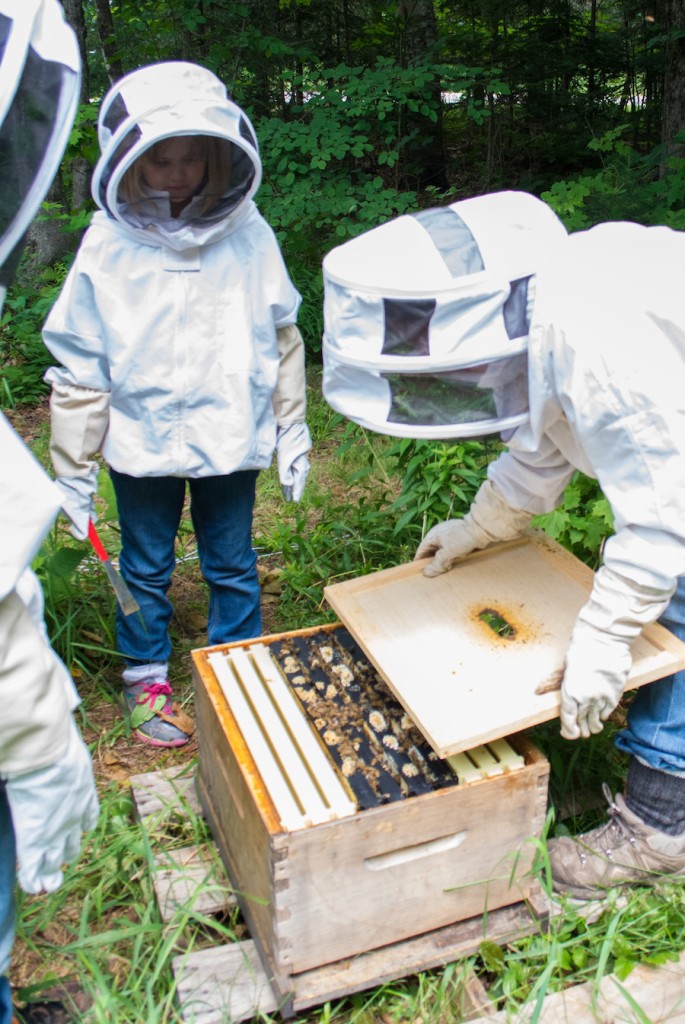 The overflowing attendance at Laura’s beekeeping workshops paired with a growing interest in where our food comes from may indicate that the interest in urban beekeeping is on the rise. Laura is hopeful that the City will be open to considering beekeeping as a green initiative for the community. “I would like the City to do more than change the bylaw. I would like them to make it a proactive regulation like Vancouver has. If we establish some good practices then it can be done properly so that there aren’t any problems for people in the neighbourhood.” Moreover, she would like to see the development of an inclusive and green policy for Sault Ste. Marie that will support small backyard agriculture. “I would love to see a food charter for the city. I want to see urban agricultural development for the city so that people can, as in Vancouver, have three chickens in their backyards. For me it’s about a more comprehensive food strategy and my little part in that is about the bees.”

To learn more about beekeeping or Laura’s research contact her at: laura.wyper@algomau.ca