The Pollinators in Agricultural Symposium, hosted by the Rural Agri-Innovation Network (RAIN), attracted a collection of thirty or so farmers, gardeners and agricultural enthusiasts from around the Algoma District this past weekend. Participants gathered at the Bruce Station Hall in Bruce Mines to attend speakers who addressed all things bees.

Among the line-up of presenters included Susan Chan. Over the course of her academic career Susan study agriculture where she first began learning about honey bees at McGill University. She pursued her Master of Science degree at the University of Western Ontario where she shifted her focus to native pollinators. Today she manages the Native Pollinator’s program for the non-profit, Farms at Work.

“Honey bees are not natural to our environment. They are an agricultural bee,” she said. “Even though a honey bee is a pollinator they were brought over here by colonizers for the purposes of honey and bees wax.”

Susan explained that there are two types of bees native to Ontario- the bumblebee and the solitary bee.

“Bumblebees live in very small colonies that don’t last from year to year and they make a small amount of honey for their day to day consumption. The largest group of native bees are solitary bees. One bee lives in a nest and raises a few offspring and they don’t make honey. Nectar and pollen are their food source.” 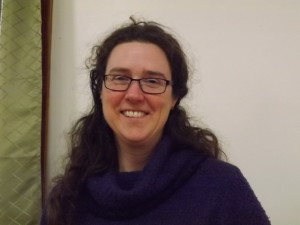 Jenny Pearce, Market Gardner. “I’m getting honey bees for the first time this year and I wanted to learn more about bee keeping and pollination. I’m getting the bees for honey and I also have a market garden so I’d like to know how to increase pollinators to my yard.”

A key message in Susan’s address to symposium participants was the need for diverse pollination strategies.

“There are other bees besides honey bees. We shouldn’t be building an agricultural system on one species of pollinators. We need to build a system that uses all the pollinators out there. Honey bee populations are under a lot of pressure right now and they are declining. If we’re going to create a food system that is sustainable, safe and dependable we need to not depend on honey bees for pollination.”

Neonicotinoid pesticides have been linked to an alarming decrease in the honey bee population. In November 2014 the Ministry of Agriculture, Food and Rural Affairs announced a three point initiative that will ensure a healthier ecosystem and a more productive agricultural sector while reversing the downward trend of pollinator numbers.

The strategy includes an 80 per cent reduction in acreage planted with neonicotinoid-treated corn and soybean seed by 2017; limiting the number of honey bees that die during winter by 15 per cent by 2020; and developing a comprehensive action plan for pollinator health. If the proposal moves forward new rules will be in place to affect the 2016 growing season.

“There are certain segments of the population that are not happy with the government’s approach,” said Susan. “Over the next little while there is going to be a tug of war. But I’m looking for a solution that works for farmers and for pollinators. And I believe very strongly that there is one.”

Following MAFRA’s announcement in November, the Grain Farmers of Ontario issued a release that claimed that the provinces grain farmers were under attack. Board Director, Henry Van Ankum, expressed that the regulation was an unfounded and unrealistic one ushered in on the basis of popular vote and not science and practicality. 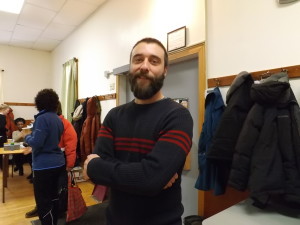 Saul Fraleigh, researcher with RAIN. “It’s my day off but this is the kind of stuff I enjoy. This is a great event- pollinators have been overlooked for a long time.”

Susan does not advocate for the complete abolishment of neonicotinoid’s but cautions that it should be used sparingly and only as required.

“Part of the problem is that we use way too much neonicotinoids in way too many areas. It is a persistent chemical and has become too widespread. We need to shrink usage and keep them as tools for when we need it. Neonics are like antibiotics. If everyone takes antibiotics everyday they become useless. We need to keep antibiotics for when we are really sick. And that principle should apply to the use of neonicotinoids as well. We need to use them when we there is a demonstrated need for them. We can’t keep using them prophylactically and that’s how they are being used right now. They are being used now just in case you might have a pest.”

Neonicotinoids are not the only threat to pollinators and those that depend on pollinators. Ironically, the farmers and gardeners need of pollinators have been challenged by the unnatural places that they create.

Mono-agricultural systems often means that pollinators have thousands of acres of fields with just one crop that produces for a short time during the season which then leaves them with very little food for the rest of the year. 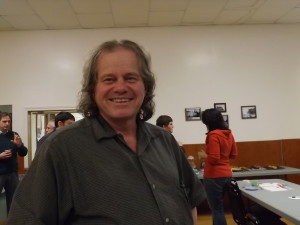 Don McGorman, Clean North and regular guy. “Through Clean North I’m involved with local agriculture through community gardens and wanted to learn more about what is going on. And at home I have a wild area that I’m trying to manage as a pollinator garden. I have some new ideas and some things that I’d like to try out now.”

“I encourage commercial farmers to use the edges of their fields to allow for natural spaces. They can plant things or allow things to flourish that one might consider a weed- like goldenrod, asters or pussy willows, to attract native pollinators,” remarked Susan. “I’ve been working with farmers for three years and what I have observed so far is that when you create a place for bees to live on the farm, the bees will come and as long as the farmer is not killing them with insecticides they’ll stay. A farmer can build up populations of native pollinators so that their entire pollination requirements can be kept without keeping honey bees.”

Farmers and gardeners needn’t hasten to build habitats for native pollinators if they are able to recognize the existing assets on their property. According to Susan, an unkempt patch of grass can be a great thing.

“Long grasses are attractive to bumblebees that may choose to nest in matted patches of grass. Bumblebees also nest in abandoned rodent burrows. Solitary bees have a preference for two natural habitats. Some build their nests in tunnels in the ground so one thing we caution farmers who want natural pollinators is to not till their land deeper than six inches. Solitary bees also lay their eggs in hollow stems. You can actually buy this type of nest or make them but my favourite way to create this habitat for native pollinators is by planting plants that produce hollow stems. Sumac, elderberry, raspberry and blackberry all have hollow stems. As the plant gets older the stems die back and bees can nest in those stems.”

While the climate is undeniably harsher for native pollinators in Northern Ontario there are some advantages. “Northern Ontario actually has an advantage because there isn’t as much crop land,” explained Susan. “The environment is more pristine.”

In 2012 Susan published A Landowner’s Guide to Conserving Native Pollinators in Ontario. You can read that by clicking here.