Trending
You are at:Home»Northern Voices»Algoma | Tiny Houses: Why They Kick Ass!
By Steffanie Petroni on July 1, 2015 Northern Voices

The good life isn’t free but it can be simple. These days an existence unburdened by onerous debt and unfettered by an accumulation of ‘things’ isn’t only the pursuit of monks. Tales about stable employment and cash on the barrelhead deals have become the talk of old timers around campfires. But some folks, folks like Erin Heeney and Jesse Kahtava, have bucked mainstream conventions, opting for a return to old-fashioned thrift, common sense and ingenuity. 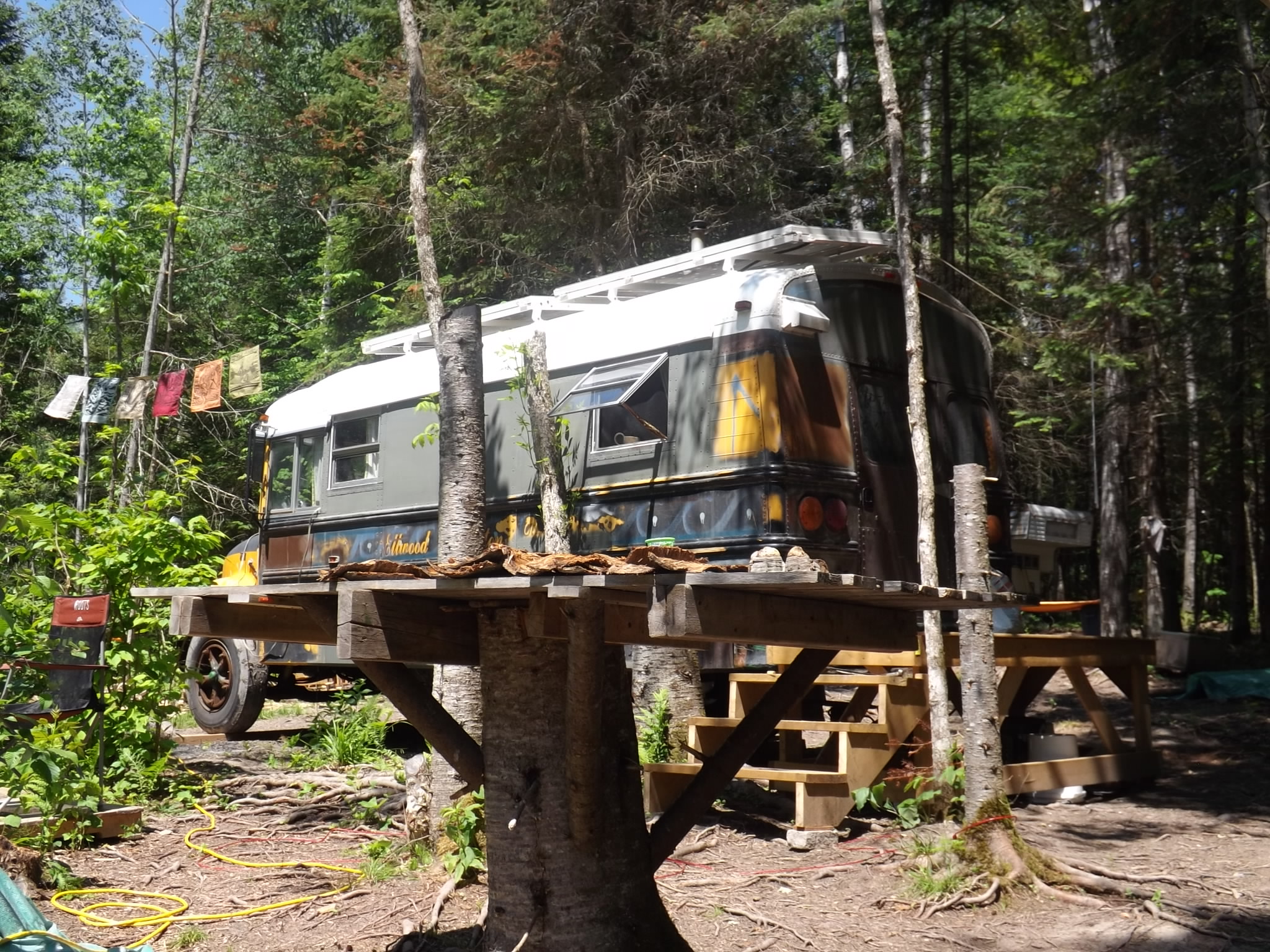 Jesse tore down the school bus to its bare frame and rebuilt it to serve as a snuggly and functional home for the young couple. Erin is the Queen of tetrisizing and found a place for all that they required. This little home on wheels is still road worthy.

A short drive through Echo Bay along a few dusty roads leads you to Erin and Jesse’s woodsy property -50 acres of it. The Iron River runs through their land and being late in the season the water levels have receded. Twelve feet above the tributary upon solid ground, nestled next to a few tall trunks for security, is the couple’s short school bus- home sweet home.

“It just sort of evolved. We never really had a well thought out plan that we would live in bus,” remarked Jesse of the couple’s decision to live tiny.

“We were looking at houses and property but we were never into the commitment. I was really afraid of the struggles that go with starting from scratch,” added Erin.

“As time went along we thought this would be something that would provide us with a comfortable place to stay with a lot of luxuries,” put in Jesse.

The couple took a contemplated leap at purchasing the property, planning to have the debt paid off within two years- and so far it looks like they are right on track. Both Erin and Jesse were against enslavement to a 25 year mortgage commitment, particularly given their common situation of being precariously employed. He is an entrepreneur- web design, and she works part-time in a winery. Both completed post-secondary education. 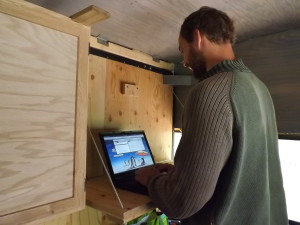 Tiny houses are like a Swiss Army knife- their function serves many purposes. By day this space is dedicated to Jesse’s work station. By night it transforms into Jesse and Erin’s bedroom. (Jesse crafted all of the nifty function features!)

Erin and Jesse aren’t expecting to ever find that full-time job with benefits at the steel or car plant with a pension and a mantle clock tossed in for measure after 35 years of dedicated service. Freedom 55? What’s that?

Among today’s labour force it is not uncommon to find people balancing a couple of part-time jobs, creating their own employment, struggling with unemployment, tolerating underemployment or moving from one government funded contract position to another- if they’re lucky or not too old to fit the ‘under 30 yrs.’ requirement often attached to such agreements.

Factors such as increased reliance by employers on contract workers, the decline of the manufacturing industry, the information revolution, dramatic technological advances and the demand for higher educational 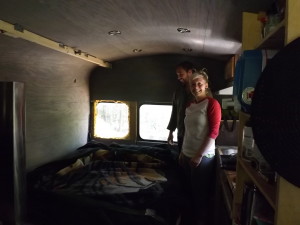 levels have all played a part in the increased precariousness of work. Precarious work is characterized by job instability, lack of benefits, low wages and degree of control over the process. (source)

In a report entitled Vulnerable Workers and Precarious Work, published by the Law Commission of Ontario, it was found of precarious work that: 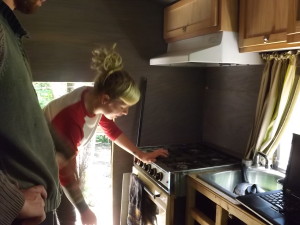 Ever focused on sustainability this tiny oven/stove cooks with minimal propane. On nice days the couple cooks outside on their rocket stove. Erin combed the classifieds until she found a load of bricks free for pick-up to assemble the outdoor stovetop.

Because of the financial unpredictability associated with precarious employment Erin and Jesse designed a lifestyle that could be maintained. They eliminated a monthly PUC bill by rigging their little house on wheels with power generated from solar energy and occasionally batteries. The cozy space is heated by a tiny but powerful woodstove. Jesse also installed a water filtration system that allows them to draw water from Iron River. And of course- they haven’t a mortgage or rent payment to race to make every month. This economized way of life allows Jesse and Erin to enjoy what they love –dining out, travelling and buying the ‘good’ bottle of wine.

“You still need money coming in but you get a little less stressed out about the general finances. I think it’s just about living in your means,” shared Erin. “Some people don’t do that. It’s just insane. They’re so stretched. It’s a burden on their relationship.” 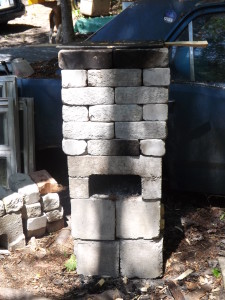 “I’m averse to big debts. The property was an initial debt but we’ll have it paid off by the end of the year. Having a house scared me,” admitted Jesse. “It’s a big commitment and I don’t have job security because I’m self-employed so I like to have small chunks of debt that I can deal with in a reasonable amount of time.”

Today the average Canadian family struggles with $100,000 in debt. This figure includes mortgages, student loans, credit card debts and lines of credit. That’s a debt-to-income ratio that is a record 150% -for every $1,000 in after tax income earned by Canadian family, it owes $1,500. In 2010, 17,400 households were behind in their mortgage payments by three or more months. Many Canadians have grown concerned that they will likely be paying off their debt/mortgage after they turn 65 and the same proportion believe that they will still have to work to make ends meet. (source)

Erin and Jesse’s simpler way of life has allowed them to avoid the tempting trap of another kind of debt- consumer debt. Excluding mortgage debt, the average Canadian holds $20,910 in debt on stuff- cars, clothing, electronics, meals out and trips. (source)

But before we go any further let’s clarify that consumerism isn’t a bad thing. Consumerism makes the global wheel go round! But the practice of excessive consumerism has slipped into the collective psyche and is a new norm that has become hard to shake off. 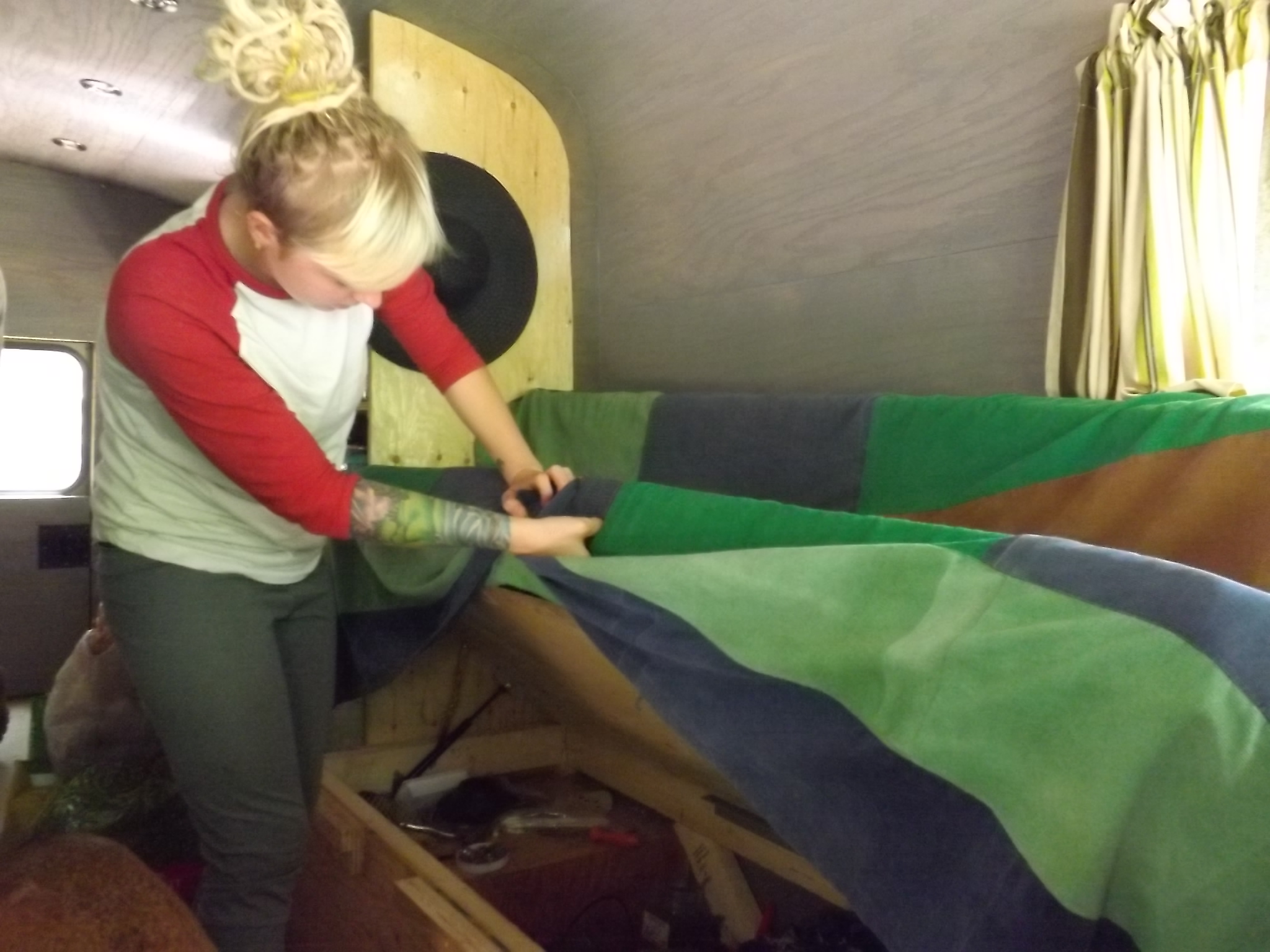 Everything has multiple purposes in a tiny home. Erin reveals storage space beneath the couch that transforms into a pull-out guest bed for overnight company- expected or not!

This drive to acquire new stuff can be chalked up to obsolescence – the state of being which occurs when an object, service, or practice is no longer wanted even though it may still be in good working order. The experience of obsolescence can be planned and perceived.

Planned obsolescence is a policy of planning or designing a product with an artificially limited useful life, so it will become obsolete, that is, unfashionable or no longer functional after a certain period of time- like when your sweater pills or the brand new iPhone only boasts antiquated technology two months after purchase. Perceived obsolescence is what happens when an object may continue to be functional, but it is no longer perceived by the owner to be stylish or appropriate – in other words, keeping up with the Jonses. 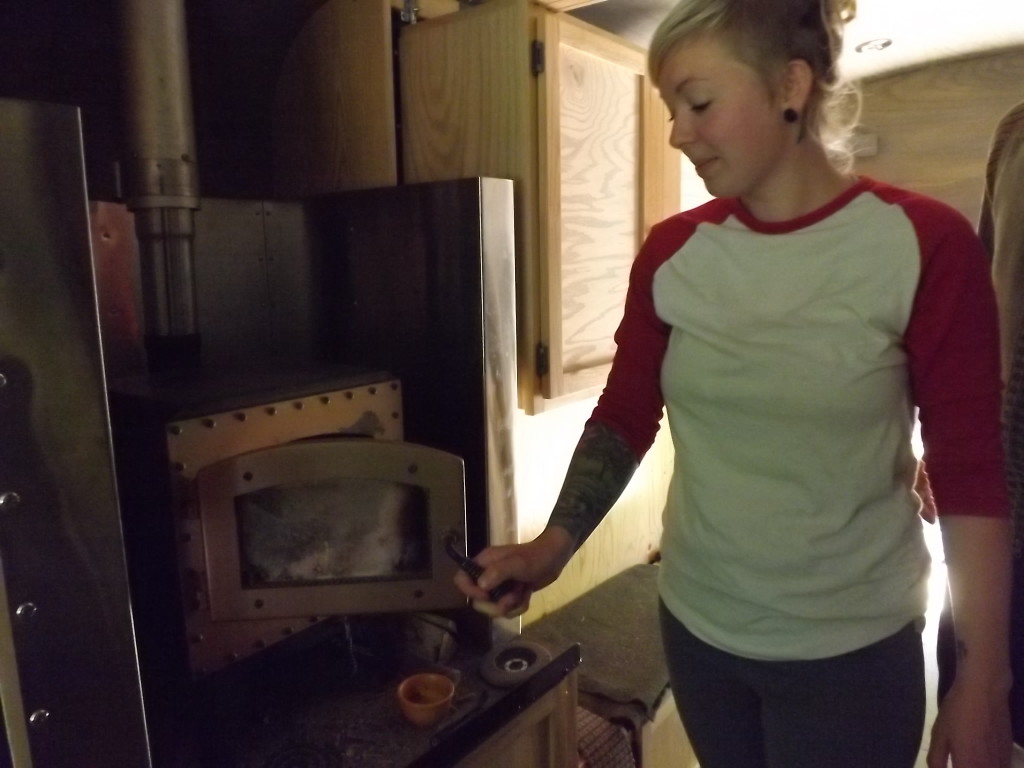 Tiny living has caused- albeit willingly, Erin and Jesse to downsize their possessions and give carful thought before purchasing new items to bring back to their modest abode.

“I probably have a few totes and clothes still at my mothers. Before we lived here we lived in a very small apartment with no closets so that’s when I did my huge purge,” remarked Erin. “I wasn’t collecting or hoarding or anything like that but I got rid of a lot of things that I didn’t need. I flipped a switch where I realized that I wasn’t owning these things anymore, they were owning me. I needed to get rid of them. There was no reason to have all of that crap. Like DVD’s- who needs stuff like that? We watch everything on a computer.” 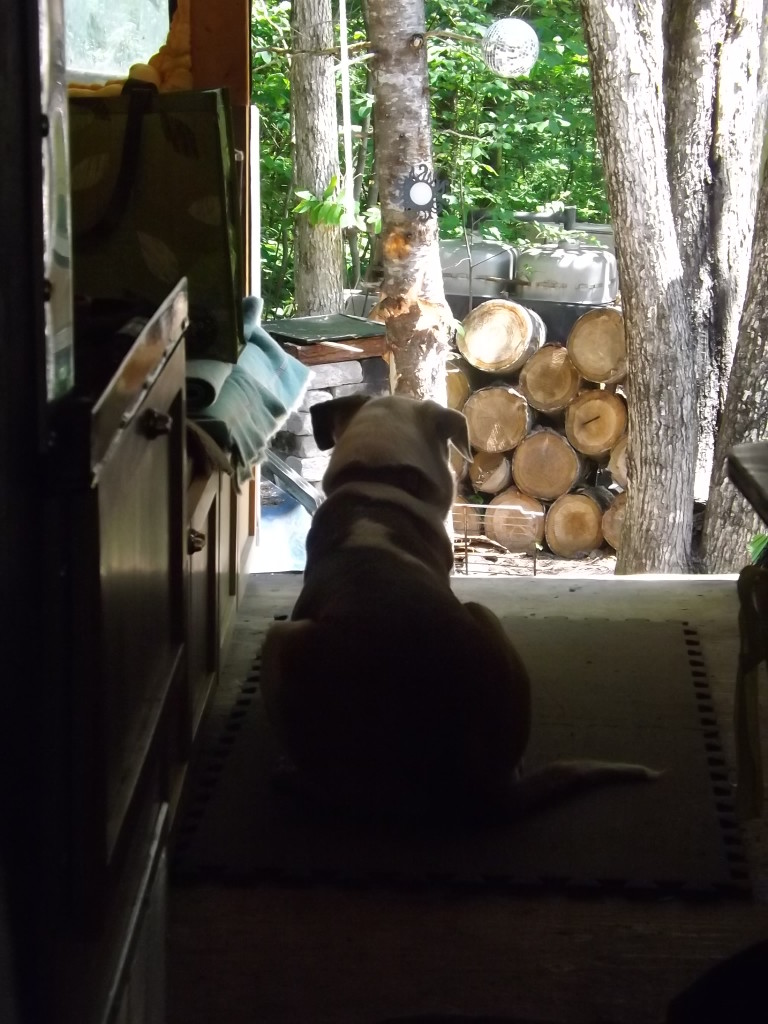 “We were so excited when we added the back deck.” Erin flings open the back door on to the new space. “See,” she says laughing. “It feels so much bigger doesn’t it!”

It is obvious that Erin and Jesse are naturally conscientious about their carbon footprint. In addition to powering their home through solar energy, as well as setting up a couple of sawdust composting toilets- one inside and one outside, the couple searched for items that they could reuse in the design and function of their home.

“We call this hippy scraps,” laughed Erin as she lovingly ran her hand over a storage cabinet crafted by Jesse. “This little cupboard was made from a door and an old table that was in the Windsor Park, some old flooring and other oak pieces that we found. We could never part with this.”

Shirking excessive consumerism for a sustainable lifestyle- not to be mistaken as a barren existence, may not appeal to everyone. It could even be a bit of a culture shock. But for Erin and Jesse it’s just plummy.

“You have to enjoy yourself to live like this,” advised Jesse. “It’s very satisfying when I chop wood. And we’ve found ways to make productive tasks a good time. Last weekend we had some friends over and they helped us build an outhouse and it was an enjoyable weekend activity. And then when they need help with something- we’ll return the favour. We have a lot of nice nights lighting the fire, playing some music- having a little dance party.”

“And we have a great set up here. We have the infrastructure so that it is very convenient to live in a sustainable way,” enthused Erin. “The place is small we have everything we need. It doesn’t have to be that pioneer-like. I won’t have to wring out diapers in the river.” She casts a glance towards Jesse and then adds with a grin, “But that’s not for any time soon.”

What is up and coming are the addition of a few alpacas!

“It wasn’t in the plan but we had a really good business opportunity that we had to jump on. For me it meant being self-employed and being able to work and live in Echo Bay and not have to commute. So we just did it,” smiled Erin. 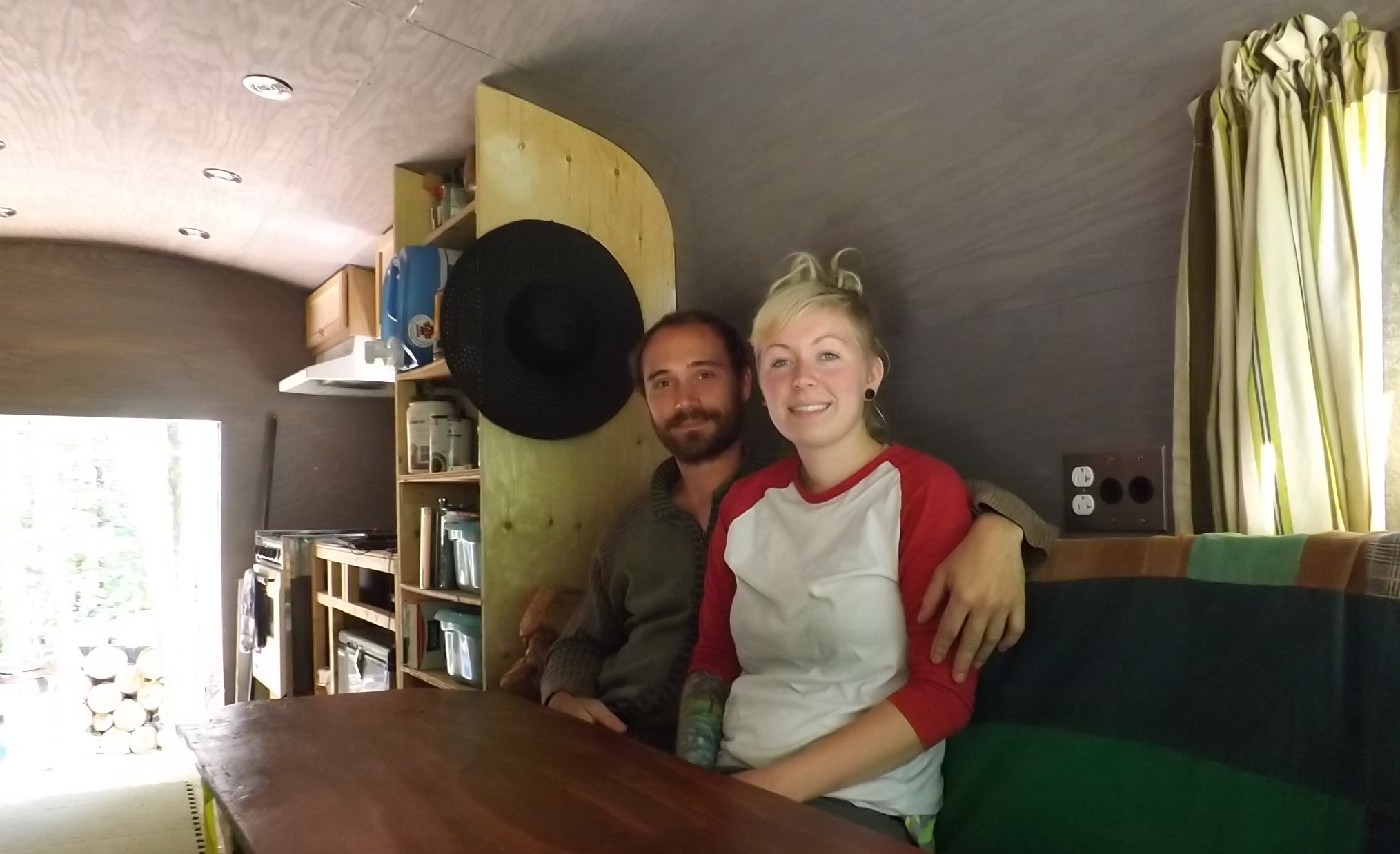 “We had a few friends over last weekend and we played cards.” Jesse chuckled. “The set up makes for an interesting game because we’re all sitting next to each other and we can see everyone’s cards! It was a good time!”

Someday down the road the couple would like to build a small cabin on their property. “It’s easier to wood heat and it puts less strain on the forest,” remarked Jesse.

There is some apprehension about Northern Ontario’s long winters –and their first one, in a tiny house, but family is nearby if things get a little hairy. For now the young couple is content in their homey space. It has everything that they need. Their way of life is simplified and romantic- they carry low debt, are free of material bondage and have lessened their footprint. Erin and Jesse have aligned their life around their passions not their possessions.

(feature image: Jesse and Erin on the back deck with their fur babies- Cedar, Willow and Cricket. Yes- they all live together in perfect harmony.)