OMB Chairman, Blair Taylor, made a decision on Frank Breen’s -professional hydrogeologist, application to the Board as an expert witness. Originally hired by the SSM Conservation Authority to conduct a peer review of the reports submitted by the developer, Breen of his own volition brought his concerns regarding the development to the Algoma Public Health Unit and City Council, after the Conservation Authority no longer requested his services.

In his explanation of his decision the Chairman stated, “The qualification of a witness as an expert witness is a very important matter in the matters that come before the Board and the matters that come before the Courts. Experts, because of their academic training and expertise may be allowed to give opinion evidence to the Board and too the Courts. The Board has codified its expectations with regard to those who seek to be qualified by the Board as an expert.”

Referring to expectations outlined by the OMB, the Chairman quoted, “It is the duty of every expert engaged by or on behalf of a party who is to provide opinion evidence at a proceeding under these Rules to acknowledge, either prior to (by executing the acknowledgment form attached to the Rules) or at the proceeding, that they are to, a) provide opinion evidence that is fair, objective and non-partisan; b) provide opinion evidence that is related only to the matters that are within the expert’s area of expertise; and c) to provide such additional assistance as the Board may reasonably require to determine a matter in issue. These duties prevail over any obligation owed by the expert to the party by whom or on whose behalf he or she is engaged.”

Ultimately, the Chairman found Breen to be unsuitable as an expert witness and stated, “The Board finds that Mr. Breen has engaged a course of conduct through his self-generated meeting with the Algoma Health Unit and subsequently his attendance and presentation to City Council that it is indicative of one who is but an advocate for a certain position. The case law is abundantly clear that a person can be an expert witness for an advocate but he or she cannot be both. It is clear to the Board that Mr. Breen has effectively through his course of conduct, crossed the line from expert witness to advocate. And to this Board it is clear that he has lost requisite objectivity that this Board requires of someone who seeks to be an expert witness. Moreover Mr. Breen is a hydrogeologist and not a coastal engineer and the Board has further concern that he has gone beyond the area of his expertise in the opinions has expressed in this report. Thus the Board will not qualify Mr. Breen as an expert witness on this matter.”

The Chairman did clarify to Counsel that Breen could be examined on new matters that had arisen since his presentation to City Council on July 15th, 2013. However, Pointes Protection Association lawyer, Helen Scott, declined to bring Breen forward as a factual witness.

The remainder of the morning and a portion of the afternoon focused on the developer’s lawyer, Orlando Rosa, cross examining the presentation made on Friday by Pointes Protection Association president, Peter Gagnon.

There were numerous points of interest and below is just a partial transcript of what was said during the hearing. Of some concern to Rosa, was the understanding of the Minutes of Settlement signed at the outcome of the judicial review in August 2013, where certain issues such as flooding, pollution and sceptic issues were not to be brought up by the Pointes Protection Association. Gagnon did, in fact, address these as concerns in his presentation to the Board. 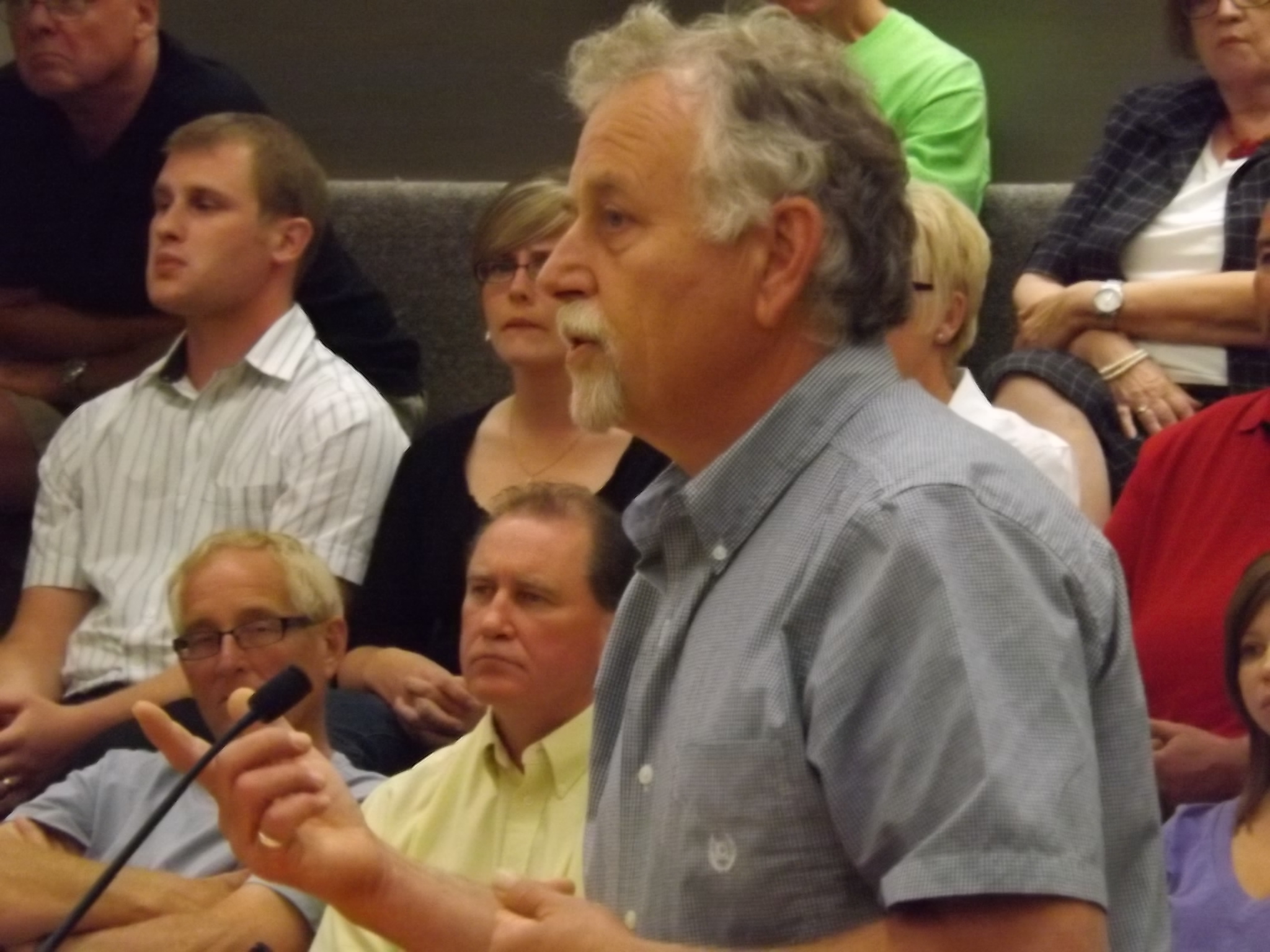 Below is a partial transcript where Rosa questions Gagnon as to his understanding of the Minutes of Settlement.

Rosa: Is that your signature

R: And did you understand these minutes of settlement when you signed them?

OMB: Mr. Gagnon-this is the third time this morning. Please listen to the question …

R: Is that your signature on the bottom of page 2?

R: And did you understand the minutes of settlement when you signed them?

G: Yes I understood that we would not advance the position that the- we wouldn’t talk about the decision of the Conservation Authority.

R: Let me ask the question again- let me put it even more specific- did you understand the entirety of what was stated in the minutes of settlement?

R: Well you thought you did or you did?

G: I thought that I was not to bring this up at the OMB hearing and I never have.

R: So are you saying that you didn’t necessarily understand the entire contents of what you signed?

G: What didn’t I understand?

R: You don’t know if you understood them or not? Is that what you are telling me?

G: I indicated what I understood them to be so I guess if that isn’t correct then I didn’t understand them.

G: They passed them yes.

R: Does the PPA take the position that the resolutions passed by the Conservation Authority in December of 2012 were valid.

G: Yes we signed an agreement to say that we would not say they weren’t.

R: Oh thank you sir. Thank you. Now…And by valid meaning that all of the items which are numerated under subsection (inaudible) would not be matters revisited before the OMB. Would you agree with me?

G: Um. I guess my feeling was that the facts  -I would not bring them up as illegal or invalid.

R: And one of the things that I’ve asked you- and we’ve gone through this exercise –the pollution –you’re not complaining- you’re now saying that this proposed development could cause pollution. And this was something that was looked at by the Conservation Authority and you’re coming here today again, espousing the objection that this development will cause pollution. Right?

G: It has the potential to yes.

R: But you signed the minutes that said you weren’t going to raise those issues. And those issues included pollution.

G: Well, I didn’t interpret those as that.

On Friday Gagnon presented a map that demonstrated the developer’s area for development and the wetlands in the subject area. Gagnon had replicated a transparent map of the development to lay over the first map- essentially showing where wetland would be replaced by buildings and the canal. Rosa took exception with the map and its origins.

Below is a partial transcript of that testimony. Rosa attempts to isolate who created or produced the map- Peter Gagnon or Klaas Oswald (BPAC), and to divine out the intention of such a map.

R: Is it the same map which is part of the wetland evaluation 2010?

R: Oh I see. Why would you present this map as being a map prepared by the City when in fact it’s a map that either you or Mr. Oswald had the City prepare on your behalf to show the wetland on the subject area? You had it prepared based on information you provided to whoever made the map. Isn’t that true?

G: They have the information.

R: Did you make the request?

R: What information did you provide in regards to the preparation of that map?

G: I didn’t provide any information.

R: Sir, I’m going to suggest to you, that you were present at the meeting where you asked that that plan be prepared.

R: Well how did it come to be that Mr. Oswald gave you a map?

G: I was producing maps and so I just got a package of maps to produce and I produced them.

R: But why wouldn’t you tell us on Friday the origin of the map? How it came about?

R: You weren’t sure how Mr. Oswald got it?

G: I was showing it for demonstration purposes.

R: You were showing it…

G: As a way to indicate the amount of wetland that was being taken out as a result of this development.

R: Mr. Gagnon you put the map forward to support the proposition that the wetlands that are being destroyed are much larger than what has been indicated by everyone else who is given evidence in this hearing. I put that proposition to you sir.

G: All I was trying to do was give a better estimate to the Chair of the area that was being affected than what was being presented by a number of witnesses on behalf of the developer. We heard numbers from 80% still maintained, 50%, 60% – I did my best to bring it down to a more definable number using those maps.

R: You did it to advance the proposition, sir, and I suggest this to you, that the net wetland loss due to development was 34.05 acres- which is 70% of the wetland on the subject lands as opposed to what has been indicated by others which is approximately 18%. Isn’t that true?

R: Well I suggest to you sir that this particular map was doctored to advance that position. Wasn’t it?

G: No. There’s no doctoring going on what so ever. It’s an actual map that has the actual areas that are in fact the wetland areas as described by the MNR in 2009, over layed on to a city planning map and the development area to scale.

Currently the OMB hearing is scheduled to conclude this Friday. Members of the public may attend the Civic Centre to sit in on the hearing which begins promptly at 9:30 a.m.